On "Kevin Can F**k Himself" Annie Murphy's close female companion can barely stand her. And that's perfectly OK! 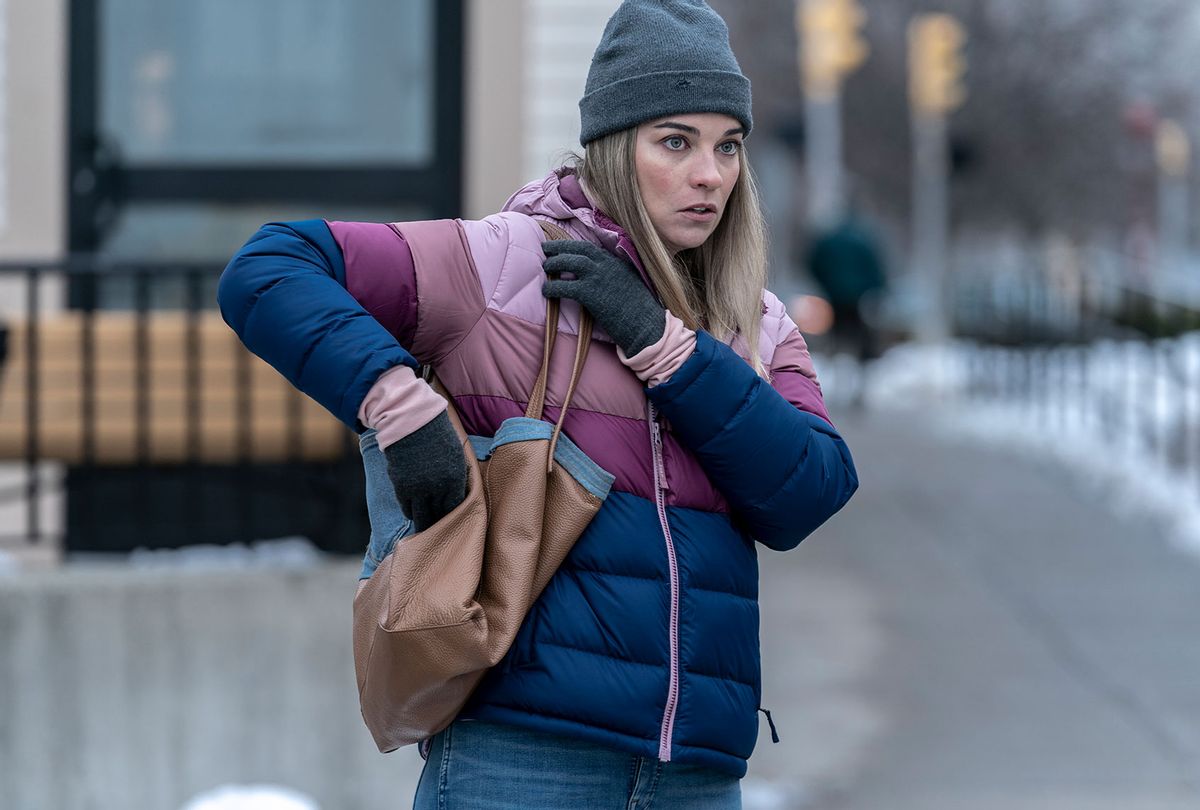 Annie Murphy in "Kevin Can F**k Himself" (Zach Dilgard/AMC)
--

The following contains mild spoilers from the fifth episode of "Kevin Can F**k Himself" titled "New Patty" that aired July 11. If you haven't watched it yet, stop reading now.

Once it sinks in that "Kevin Can F**k Himself" is a moving showcase of trope subversion, Allison McRoberts' (Annie Murphy) odd relationship with Patty O'Connor (Mary Hollis Inboden) makes sense.  Patty is Allison's next-door neighbor, and per the unwritten law of sitcoms, one might assume that the two would automatically be friends, if not best pals.  That has been the way of things since the days of Lucy and Ethel.

But Patty considers herself to be the buddy of Kevin McRoberts (Eric Petersen) Allison's worthless husband, not Allison. In fact, Patty barely hides how much she despises Allison, taking swipes at her optimism, ridiculing the other woman's fashion choices despite her own "phoning it in" sense of style.

Allison has no true-blue girlfriends in her neighborhood, or anywhere in Worchester, Massachusetts. Her former co-worker at the liquor store undermines her self-esteem at every turn. Even the clerks at the fancy cosmetics boutique she likes to visit view her with utter disdain. The only woman who is genuinely nice to her is the wife of her high school friend Sam (Raymond Lee), who currently has no idea that Allison recently had sex with her husband.

If Allison's lack of female support rubs you the wrong way, that speaks to the effectiveness of TV's messaging about women's relationships. "Kevin Can F**k Himself" is swimming against a strong current made up of archetypes that stand the test of time: Mary and Rhoda, Laverne and Shirley, Carrie and Samantha and Miranda and Charlotte, Dorothy and Rose and Blanche and Sophia.

All of these true-blue teams live in comedies, which is not to say that dramas don't have their own sets of bonded women. The strongest of those relationships survive conflict at some point in their stories. Cristina Yang may be Meredith Grey's person on "Grey's Anatomy," but they have plenty of history, which includes falling out as severely as Issa and Molly on "Insecure."

The TV comedy by its nature implies a level of assurance and low stakes, which is why so many of the simpler examples neglect to solidify or concentrate the strength of any relationships beyond those that directly impact the title character.

The cruel joke on Allison is written into the DNA of the sitcom side of "Kevin Can F**k Himself," dictating that the only people Kevin (and the audience by proxy) needs to care about are his family and his bros. How much he considers his wife to be family is also part of the joke since sitcom men are constantly failing their wives or treating them like surrogate mothers, the punchline that launches the show.

Within this ecosystem Patty is an unusual player: one of the guys, never on Allison's team. She's not entirely gender-neutral, which is what the comedy side implies. In the drab, sickly colored drama Patty has a romantic life, demonstrated via glimpses of her beta-male fiancé; she's also a stylist when she isn't using her business as a front for her drug-dealing side hustle.

Only after Allison ropes Patty into a road trip does she tighten the screws on their partnership. During their drive Allison reveals her cockeyed scheme to murder Kevin, and Patty's initial shock isn't at the confession itself but the fact that adorable widdle Allison believes she's capable of cold-blooded homicide.

Events lead to Kevin exiling Patty from the gang once he figures out that the two went to his favorite out-of-town burger spot and didn't bring anything home for him, which happens at the exact time that Patty needs a distraction from her problems, which is all Kevin, Neil and the rest of the gang are to her.

The cops are circling in on Patty's opioid dealing business, especially a particularly inquisitive female detective. Surely she doesn't want to be Patty's friend, right? But this gives Patty an idea that might also solve Allison's problems – they can pin the drug dealing racket on Kevin and off him at the same time.

Dramas have their own double-standard when it comes to women, which we saw in the hatred that erupted toward Skyler White when she dared object to Walter's meth-dealing business on "Breaking Bad." Men can be difficult in prestige dramas; women have a tougher time of it. That's why we remember Edie Falco more as the long-suffering Carmela Soprano than the drug-addicted, tart-tongued title character in "Nurse Jackie."

Then again, "Sex & the City" writer Carrie Bradshaw was no angel to other women either, betraying lovers' wives and judging her friends.  But that doesn't make her terrible, merely flawed – a spiritual role model, of sorts, for characters like "Never Have I Ever" protagonist Devi who, among other mistakes in this new season, obliterates the reputation of another young woman out of envy.

Devi is lovable for a lot of other reasons, of course, and some of them she has in common with Murphy's self-serving but adorable Alexis Rose from "Schitt's Creek." I'm not entirely sure she or "Kevin" creator Valerie Armstrong or showrunner Craig DiGregorio intend for us to like Allison, the traditional expectation of the sitcom audience. Very few other people do aside from the character's high school crush.

That makes her an interesting experiment, doesn't it? The sitcom wife who not only lacks female companionship but in her current state is impossible to befriend. You almost can't blame Patty for keeping Allison close in the way we're supposed to with enemies.

The show's bifurcated nature could make it impossible to fully connect to Allison. Her personality remains constant between the comedy side of the show and the drama, and in both worlds she's a little unstable, the type of person one gleefully watches from a distance without empathy, drinking in the schadenfreude.

She's a creature of catharsis ready to blow with nobody to hold her hair while she vomits up her pain. Maybe that's not an entirely new persona on TV. But if Murphy and the show's creators wanted to build a story around a character that challenges the storied, expectations of how women behave to each other and in the larger TV world, they've hit on something.

"Kevin Can F**k Himself" airs Sundays at 9 p.m. on AMC and streams a week early on AMC+.