"The Lost Leonardo" is a slick, fascinating mystery that uncovers ego and hubris in the art world 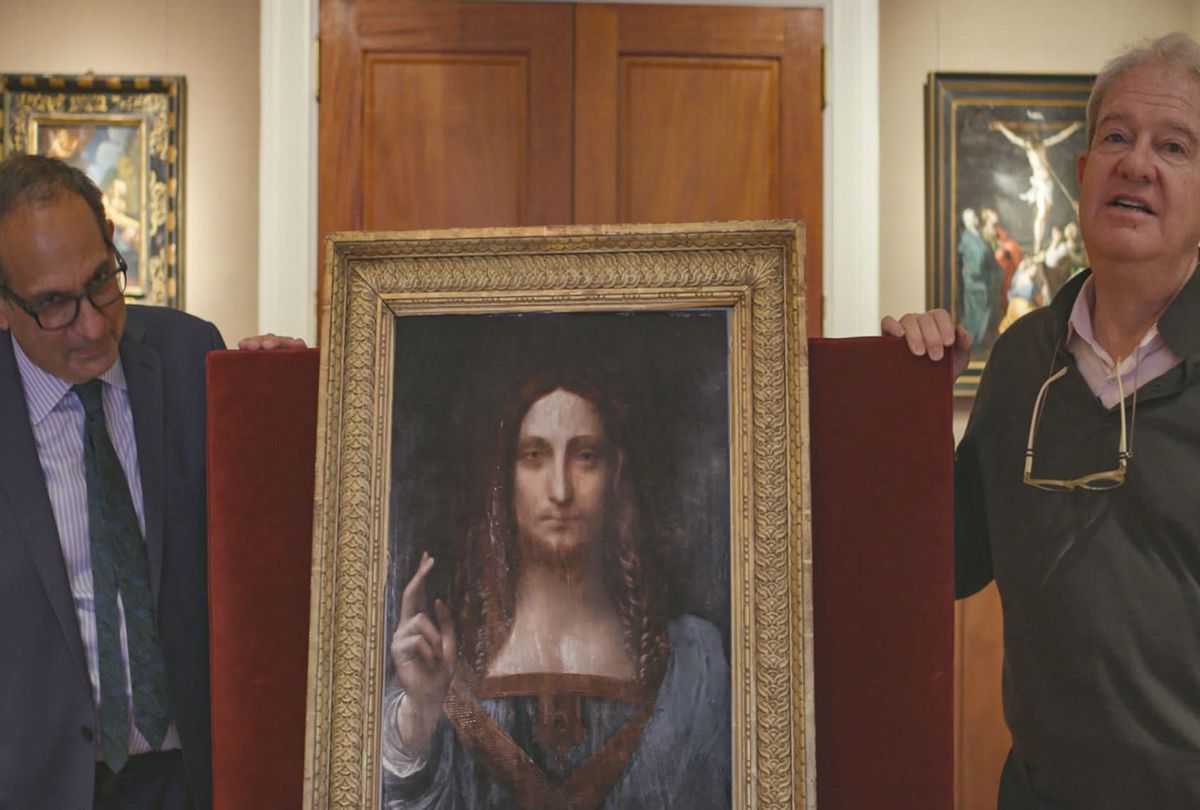 The fleet documentary "The Lost Leonardo" traces the provenance of the "Salvator Mundi," a work of art that some folks believe was painted by the master, Leonardo da Vinci. Other experts, however, suggest it could be from the "workshop of," or even "circle of," or "follower of" da Vinci. One critic declares, "It is not a good painting." What is true may never be known, but director Andreas Koefoed's slick film suggests, its creator is perhaps unimportant in the long run. One lesson this documentary provides is why groupthink — and wanting a fact to be true — is dubious.

What can be verified is that this painting, which has been described as "The Male Mona Lisa," was purchased at auction for $1,175. It was later resold for $83 million, then for $127 million, before Christie's auctioned it off in 2017 for $450 million, making it the highest-priced sale to date.

Koefoed puzzles out the story of how all of this came to be, shrewdly letting viewers absorb all the facts and points of view and deciding what they want to believe.

The cast of characters is a fascinating rogues gallery. Alexander Parish noticed the painting at a New Orleans auction. (How the work of art ended up in the United States — and in New Orleans especially — is frustratingly never addressed.) Parish discusses the work with Robert Simon, an Old Masters art dealer, and after they buy the painting in 2005 for $1,175, they take it to Dianne Modestini, a restorer. She examines it, retouches it, and notices that that upper lip is remarkably similar to the Mona Lisa. Though there is "probability," there is not "provability." As various experts in the art world are asked for and give their opinions, it is declared to be a Leonardo. It even ends up in a National Gallery exhibit in London, credited to Da Vinci.

One person who has no trouble expressing his doubts about the work is art critic Jerry Saltz, whose amusing remarks insist that the emperor has no clothes. Likewise, Kenny Schachter, an art dealer and columnist, also provides a voice of reason, expressing his concerns about how folks are responding to the painting. (They are, without a doubt, the best talking heads in the film).

"The Lost Leonardo," however, soon reveals itself to be a follow-the-money story and about greed and hubris. What is the value we place on art, and by extension, what is the global impact of what a "discovery" like this has? These are the key questions, and where the film is most sure-footed.

Koefoed next introduces Yves Bouvier, a Swiss businessman who owns freeports in Geneva (and elsewhere), where art and other valuables can be stored tax free. He arranged to buy the painting for $83 — and sell it at a fiendishly inflated $127 — to Dmitry Rybolovlev, a Russian oligarch. If nothing else, "The Lost Leonardo" emphasizes that you should "never cross a Russian oligarch." When Rybolovlev gets wind of the price hike, he responds with a nasty backlash.

This action prompts another sale of the painting, which happens at Christie's. Significantly, the auction house creates a marketing campaign that not only deliberately does not show the painting but features another Leonardo — DiCaprio, that is — looking in awe at it. Expecting to fetch a record $180 million for the "Salvator Mundi," Christie's and the world are astonished when the painting sells for $400 million (plus $50 million in fees). Who bought the would-be da Vinci is unknown at the time, but is later revealed. A question is soon raised about if the "Salvator Mundi" will be displayed at the Louvre during their exhibition of Da Vinci's work on the 500th anniversary of his death.

"The Lost Leonardo" nimbly chronicles all this activity. Koefoed keeps viewers engaged in the opacity of the art world with its auctions and high (and sometimes hinky) finance. However, the film covers too much ground. Parish and Simon are practically forgotten after the painting is sold, but Modestini reappears throughout the film, waxing nostalgic, and pooh-poohing the trolls and folks who claim the painting is a fraud. There is commentary from FBI and CIA agents to play up the fraudulent aspects of things, but those leads do not really pay off, except to the extent that the intelligence community knew who spent the $450 million. Various other perspectives are presented over the course of the film in the barrage of talking heads that can be dizzying.

While each narrative strand of the story makes a compelling short film, at times, Koefoed needlessly inserts a close-up of a bunch of worms when an interviewee mentions "worms." And some of the recreated scenes, such as the painting being carried in a trash bag, or the email exchanges where Yves negotiates with Dmitry, seem excessive or filler.

But such indulgences are not a deal-killer in a story as juicy as the "Salvatore Mundi." The questions the film raises about the unhealthy alliance of art and politics — as when the staff at the Louvre negotiate with its ex-anonymous buyer about displaying the art in the da Vinci exhibit — are quite interesting. When the reason for what played out is revealed, it gets back to the initial points the film makes about ego and hubris.

Koefoed's film ultimately considers the paradox of this "problematic" painting and its shadowy provenance. What is the value of a "global trophy" that may not be priceless? "The Lost Leonardo" is sure to be appreciated by the very folks who would want to see the "Salvator Mundi" up close and in person to decide what they think for themselves.

"The Lost Leonardo" releases in theaters on Friday, Aug. 13.