I took a chance on a clinical trial to save me from cancer. The vaccines are far better studied than what I endured 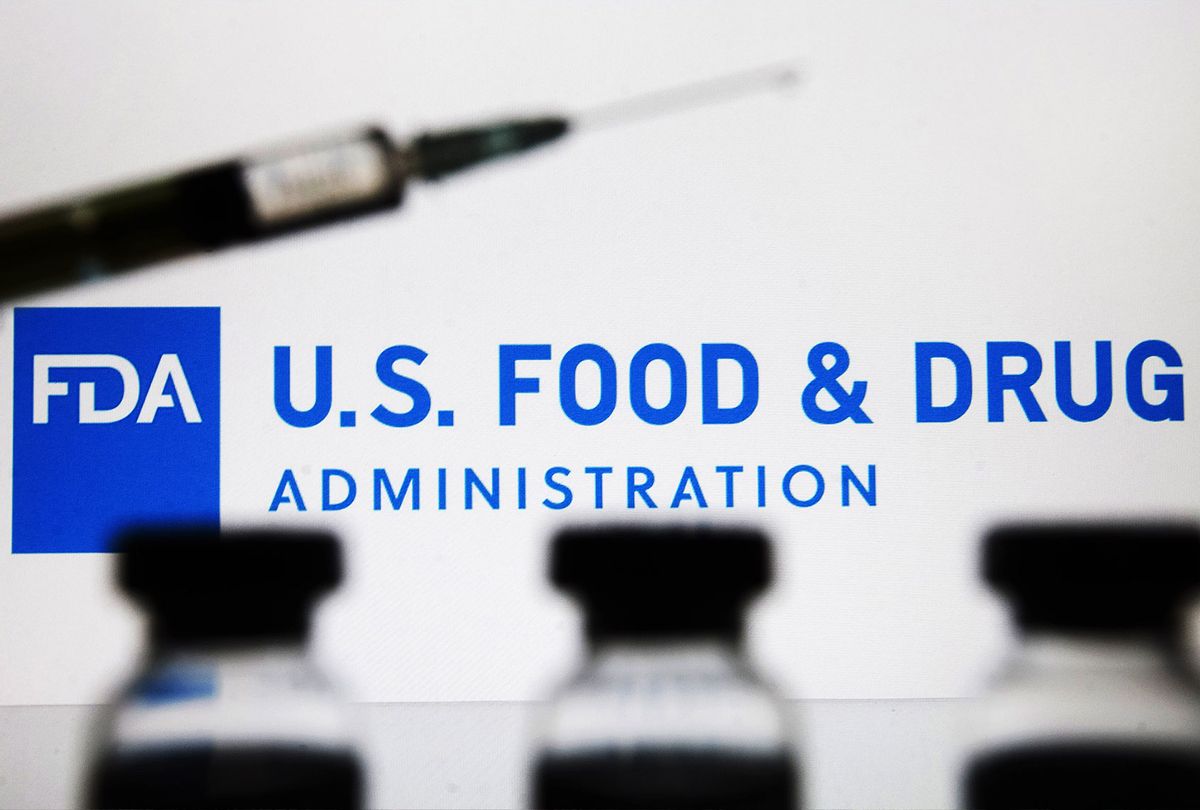 Vials and a medical syringe seen displayed in front of the Food and Drug Administration (FDA) of the United States logo. FDA finds the COVID-19 vaccine. (Photo Illustration by Pavlo Gonchar/SOPA Images/LightRocket via Getty Images)
--

It's been a recurring argument of late — one seen in chilling newspaper stories and all over your extended family's Facebook posts — that the vaccines are too new, too untested; that we don't know the long term effects of these shots that have been authorized for emergency use. You can even now buy t-shirts, perhaps to wear to your next insurrection, that read "I'm not a lab rat" and feature a vaccine vial with a line through it. But may I suggest that an escalating pandemic that has already killed over 600,000 of your fellow Americans is not the best moment to develop such a unique position on bodily autonomy? Instead, take some advice from a real life lab rat: please don't be afraid of being a COVID vaccine lab rat.

Back in April, a CNN poll estimated that 26% of adults said they would not get the COVID vaccine. You'll never believe what happened next! The reasons for vaccine hesitancy are not singular or even entirely partisan. We are facing an onslaught of causes from misinformation to youthful hubris; as FiveThirtyEight reported last month, "the younger the age group, the less likely it is to be vaccinated relative to its share of the population." The are also entirely legitimate historical and contemporary reasons to be skeptical of our healthcare industry. It's not like the track record is so great here.

The US has committed atrocious acts in the name of scientific progress — the notorious Tuskegee syphilis experiments, the early combined contraceptive pill trials in Puerto Rico, the list goes on. Again and again, the most vulnerable have been treated with callous, intentional and often fatal disregard. And while those shameful acts are part of our past, we are living in a present day moment of reckoning over the opioid epidemic havoc wreaked from corporate pharmaceutical fraud.

And yet, you can be cautious and hold authority figures accountable and also minimize your chances of imminent death at the time. Those are all good goals. Urgent crises call for unprecedented measures. The rewards — not dying gasping for breath, unable to even hold a loved one's hand — outweigh the current risks. In extraordinary circumstances, being a so-called lab rat can be a pretty sweet deal.

I've been one for nearly a decade already. In 2011, I was diagnosed with metastatic melanoma and became one of the first ten people in in the world on a combination immunotherapy clinical trial. Of the 52 of us in the initial group, "adverse events of any grade, regardless of whether they were attributed to the therapy, were observed in 98% of patients," while "treatment-related adverse events were observed in 93% of patients." More than half of the patients experienced grade 3 or 4 (severe) treatment related adverse events. My own side effects included dizziness, rash, fatigue and not dying of cancer. Twelve weeks after I began the trial, I had no evidence of disease. Ten years on, analysis of over one hundred similar immunotherapy trials shows an estimated fatality rate "ranging from 0.36% to 1.23%." I'd take those odds.

Over the years, both of my daughters have also participated in trials, one for a mental health study and one for a device for a heart condition. Meanwhile, I have gone back to school to try to crack the code of making clinical trials more accessible and patient-centered. What I can tell you from my own experience and work is that the system is messy as hell and that we have to be able to trust and respect each other if we're going to survive. We cannot get to anything even resembling a new normal while those who have no compelling medical or accessibility excuse continue to, as Amanda Marcotte puts it, "selfishly refuse the shot." And it hurts my heart that there are people with life-threatening conditions right now, while the willfully ignorant are fighting for their right to prolong a pandemic.

My friend Stacey, a yoga instructor in Manhattan, participated in one of the Astra Zeneca trials late last year. "I have a friend who's a nurse and works in drug trials at New York Presbyterian," she recalled recently. "He came to me in November and said, 'We're starting up again for the trial. I figured, if that means I get the vaccine early, that's good. That being said," she adds, "my teenage son wanted to do it and I wouldn't let him. I would've felt terrible if he'd had an adverse reaction."

My friend wound up getting the placebo, and was subsequently unblinded so she could go ahead and get fully vaccinated. Which she — and her son — did. "That's what all these trials are for," she says. "For about a year, people have been doing these trials. The people getting the vaccine now are not the first. Millions of people have gotten it. Some do have adverse reactions. But it's still a protection against something that could kill you, or affect the people around you."

Writing in Vogue last year, Molly Jong-Fast, who participated in the Pfizer trial, expressed a similar sentiment. "As someone who has struggled with health anxiety, being a medical-trial participant wasn't an obvious life choice. But I felt I had to," she said. "I am not a particularly brave person, but in a country with uncontrolled virus spread, I'd much rather take my chances with the vaccine than with the virus." That's a choice, she notes, that reduces the risks for others as well.

Nothing in life is guaranteed. I have to shake my head in amazement when I see commenters disingenuously protesting that we just don't know how these vaccines will affect us in ten or twenty years. There are people dying today. I took a chance on a clinical trial when I likely had a few months to live. Whatever long term effects that experience bought and whatever lifetime of monitoring I signed up for, it gave me these past ten years to raise my children. I went and got the Pfizer vaccine in March, spent a day feeling like hell and accepting that small price to pay for getting more days with my family. This is not abstract; this is the simple calculation that a majority of us can make. If something in my health goes sideways in ten or twenty years because I got vaccinated in 2021, I will consider myself extremely fortunate.

Last month, a neighbor and her entire family got breakthrough cases of the virus. It was a real dumpster fire. Her sister still refuses to get vaccinated. My friend told me a few days ago that she'd tried to explain to her sister that yes, they got vaccinated and they got sick, but nobody had to go the ICU. Nobody died. Your best option isn't always a perfect one. But the choice between making it better and making it worse, for everybody, is very clear. And right now, I'd much prefer to be a lab rat than a name on a headstone. Wouldn't you?