Hey, remember when "Wild Mountain Thyme" pulled off its weird twist? This isn't nearly as good 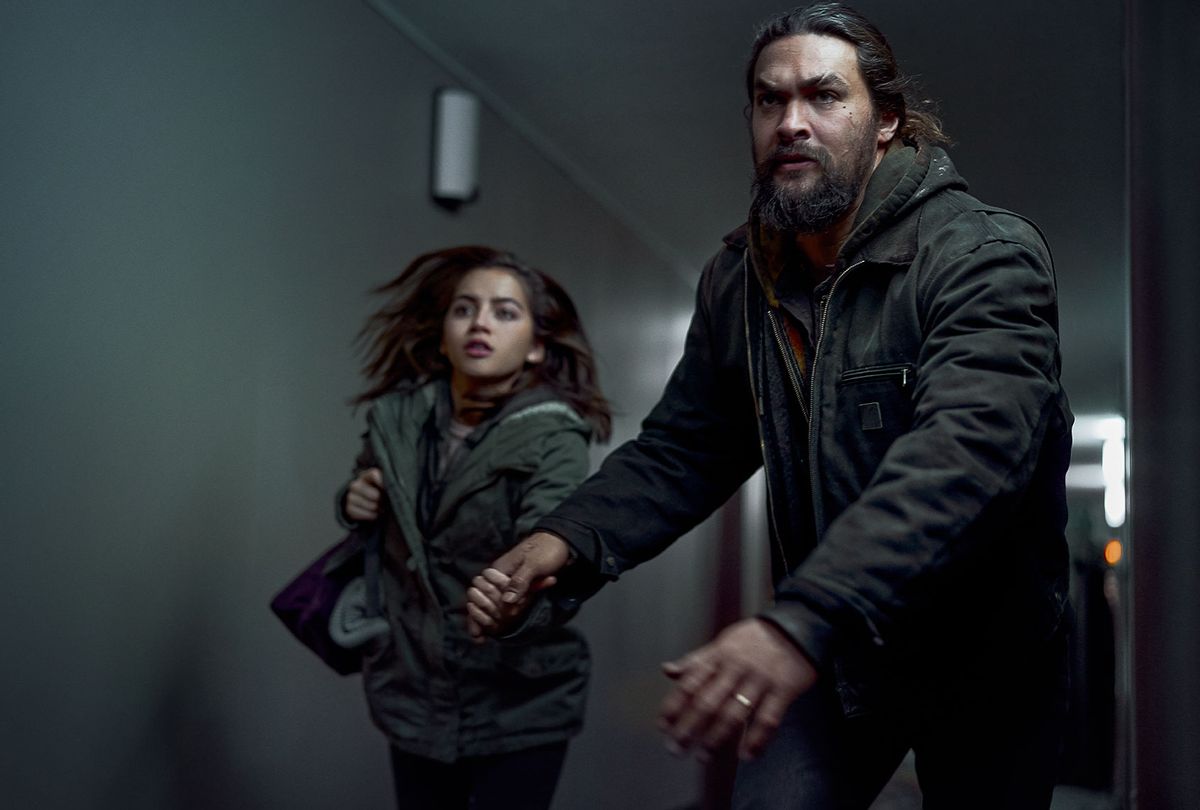 By now, big, muscular and enraged fathers and husbands seeking to exact revenge on the men who harm their daughters or wives comprise a film genre of their own, a la Liam Neeson in "Taken," or Bruce Willis in the right-wing propaganda-imbued "Death Wish." The latest Jason Momoa revenge flick, Netflix's recent release "Sweet Girl," appears to be on par with the aforementioned breed of hypermasculine thrillers — until its shocking, third act twist that changes the entire narrative of what came before.

In "Sweet Girl," Momoa plays Cooper, a devoted husband and father whose life begins to spiral after his wife, Amanda (Adria Arjona), dies of cancer, shortly after an affordable, life-saving medication is pulled off the market by your typical, greedy pharmaceutical company, BioPrime. While the company's sleazy CEO Simon Keeley (Justin Bartha) is on a CNN segment fiercely debating with the adversarial Congresswoman Diana Morgan (Amy Brenneman), Cooper vows to kill Keeley with his bare hands.

"Sweet Girl" subsequently follows Cooper as he works to make good on this threat, carrying out his violent revenge plot while also protecting his 18-year-old daughter Rachel (Isabela Merced), the titular "sweet girl." Throughout much of the movie, Cooper and Rachel trek through Pennsylvania forests, hide out at motels, and are routinely ambushed by hit men who are supposedly involved with BioPrime.

Eventually, a close encounter with an assassin named Santos (Manuel Garcia-Rulfo) leads the father-daughter duo to unlock the truth — that Congresswoman Morgan is actually the big bad behind BioPrime's evils, and the one who's put a hit out on Cooper. Armed with this information, Cooper and Rachel return to Pittsburgh, only to be pursued by FBI agents led by Agent Sarah Meeker (Lex Scott Davis) to the rooftop of a baseball stadium.

But wait! The Congresswoman reveal is just a small twist. Now comes the controversial revelation that changes the entire movie, and — to put things lightly — sheds new light on everything we've witnessed beforehand.

As Agent Meeker tries to talk Cooper down from jumping off the roof of the stadium, it's revealed that this whole time Cooper actually has been dead. He was killed two years earlier, after an assassin followed him and a journalist with dirt on BioPrime to a secret location where they were meeting. Instead, who we've been seeing every time Cooper is onscreen is . . . his daughter.

Rachel was so traumatized by witnessing her father's killing that she's suffered from PTSD ever since, and in her mind, has assumed the form of her father to take out the bad guys responsible for both her parents' deaths. In other words, all those scenes you just watched, of Jason Momoa throwing big, heavily armed men through walls? So, that was actually Rachel, mentally existing in her father's form to repress the trauma of his death.

Predictably, the twist that smacks of the "it was all just a dream" or "none of it was real" sort of nonsense, has been widely criticized for being bizarre and nonsensical. Not only that, but it also embodies the tired type of Hollywood reveal that's done for shock value and nothing more. To the extent that the twist made a trite action flick somehat a topic of conversation works partially in its favor, reminiscent of the buzz afforded from the bizarre bee-related revelation in 2020's demented "Wild Mountain Thyme." That twist did not necessarily negate what came before; rather, it deepened its weirdness.

Yet, there's something to be said about how "Sweet Girl" takes the grating, hypermasculine paternalism of the likes of the "Taken" franchise and flips it on its head, by anointing a petite teenage girl as the bruising avenger, not the big muscular dad. There's clearly an element of fun and surprising feminism here. After all, Rachel is the one who killed the slimy CEO indirectly responsible for her mother's death. She's the one who avenges her father's murder two years earlier. She's the one who took down two big men who came for her life at a motel.

But that feminist element is significantly watered down if not tossed out altogether by the fact that that's not what we got to see. For most of the two-hour duration of "Sweet Girl," what played out onscreen was just another work of violent, masculine rage theater, just another tough guy standing up for his otherwise hapless wife and daughter. Even if the truth is compelling and feminist, the movie is ultimately catered to the male gaze, to male audiences who crave the chance to project themselves onto big strong men beating up other big strong men, male audiences who would likely be entirely disinterested or even threatened by a movie about a small, teenage girl assuming this role, instead.

The execution of "Sweet Girl" is disappointing because there was so much potential for the movie to be bigger than it was. There's almost no conversation more relevant right now than the power of Big Pharma, inaccessible life-saving health care, or corrupt, two-faced politicians. And there's also almost nothing more subversive, thrilling and unique than the idea of a badass teenage girl being the new face of the revenge murder thriller.

Unfortunately, by loading "Sweet Girl" to the brim with lofty and predictable Jason Momoa fight scenes, and consequently scaling back meaningful exploration of hot-button issues, the movie cedes its potential to be more than another "Taken" revenge flick. And by saving its shocking Rachel twist for its final minutes, "Sweet Girl" essentially renders the twist meaningless. So what if Jason Momoa was the mental avatar of a teenage girl the whole time? At the end of the day, does it even matter what's beneath the surface, if the surface was all we got to see?