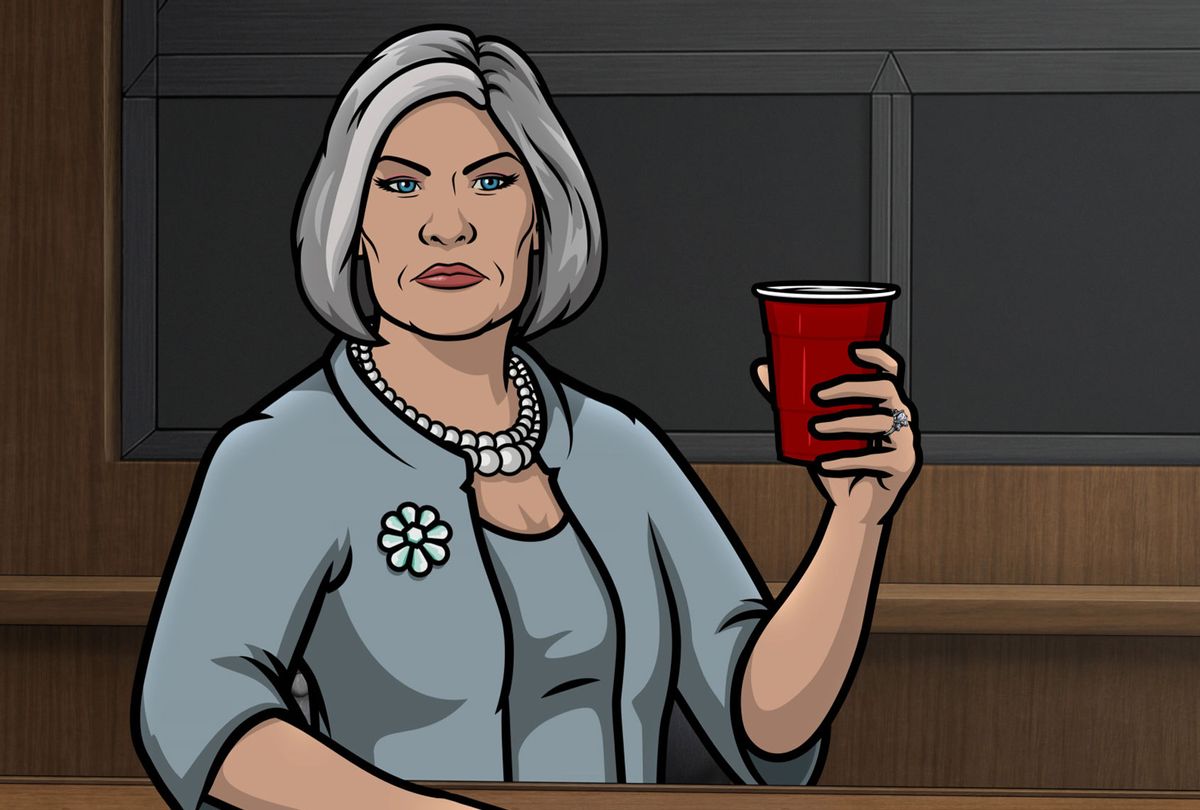 Malory Archer's signature Chanel suit and one-two punch of a double strand of pearls with matching brooch are as synonymous with FXX's "Archer" as her super-agent son Sterling's tailored overconfidence and juvenile obsession with "phrasing."

Sometimes, though, nostalgia for her years in the spy game moves her to trade in her grand dame finery for other costumes. An upcoming episode provides a terrific example of what this means, when she shows up at London's Heathrow airport in a skin-tight number leaving little to the imagination.

"For me? No!" Malory demurs before explaining, "It's more for the public."

"Archer" may be one of the oddest workplace comedies on TV, but in Malory's universe she's an ageless Golden Age cinema vixen, supreme leader and when the situation calls for it, expert puppeteer. She radiates the same big boss energy Dame Judi Dench brought to the James Bond franchise as M, only significantly less sober and more voraciously sexual.

Still, in the same way that we appreciated Dench shaping the staid part of M to fit a queen, fans of "Archer" adore Malory because she is one face of the prism that was Jessica Walter.

Walter died in March, inspiring loving tributes celebrating her work as "Arrested Development" matriarch Lucille Bluth, the role with which she's still mostly closely associated. Malory was introduced to us in 2009, six years after Lucille's initial debut. Spiritually speaking, they're cousins; both are ridiculously dignified and get their exercise by emotionally torturing their children.

Where they diverge has to do the rough grain Walter assigns to Malory, a quality the stubbornly refined but equally soused Lucille rarely demonstrates.  Malory is a harsh whiskey funneled into a cut-crystal decanter next to Lucille's vodka martini. Lucille claims on several occasions to love her children, although she doesn't necessarily enjoy their company.

Malory, in contrast, left boarding school-aged Sterling at the train station when he returned home for the holidays and realized his mother never informed him that she'd moved. Her affection fights its way to the surface when she fears her son may have been killed, or when he hovered near death in a coma for three straight seasons. The moment Archer is awake and upright, however, she falls back into the habit of prioritizing herself and her professional reputation above all else.

In Malory "Archer" creator Adam Reed gives us a woman who doesn't subscribe to the cultural expectation that a mother must nurture and support the child who wants to follow in her footsteps. Her take on parenting takes on a jagged edge of competition. If Sterling is one of the best spies in the world, that's because Malory never let him have anything easily, not even her affection.

Despite all he's accomplished, she always finds a way to imply that she's achieved more and done everything he has better than he did. Glimpses at her espionage missions dating back to World War II bolster that attitude. Walter distills all that knowing jadedness into her voice work.

And yet, Walter's penchant for telling it like it is was part of her sweetheart persona that was unlike either of the terrifying mothers she played. There's a reason the New York Times article in which she revealed Jeffrey Tambor's verbal abusiveness on set effectively derailed his career: she made us love Lucille and Malory because we trust our affection for her.

Her mastery in delineating the nuanced difference between the two characters shows the enjoyment she took in creating each woman. To voice Malory, Walter adopted a slightly raspier timbre, training her tone to effortlessly glide between apoplectic rage fits peppered with aggressive snobbery and disintegrating, frequently offensive put-downs.

Because she manifested Malory's affected classism, racism, xenophobia and casual homophobia with such delirious flair, adoring her is easy. It also helps that nobody – not Sterling nor Lana, nor their team nor the audience – takes anything she says seriously, because most of her prejudiced vitriol is colorfully ridiculous. "Immigrants!" she boozily slurs at one point while soaking in a hot-tub, "Cramming their low-riders full of free health care and . . . snow."

Throughout all of Sterling Archer's adventures Malory has been right in the mix with him. That makes knowing Walter was able to record her tracks for the 12th season a relief while also making us wonder how this world will go on without her.

Missions, alliances and the agency's employment situations constantly shift in the "Archer" universe but through it all Malory's elegantly barbed personality remains unchanged. And Walter's spirit is essential to that immutable stability. We have one more complete season to appreciate what she brings to the show more extensively than we might have before. She's also in the running for a posthumous Emmy in the voiceover category. After that, who knows?

"Archer" probably will figure out a path forward, considering how deftly it recovered from its three-season retreat from its A-plot by setting adventures inside Sterling's comatose brain. The "Dreamland" season gave the show's writers a way of paying tribute to George Coe, who voiced Archer's valet Woodhouse, after he died in 2015. It cast Sterling as a film noir detective investigating Woodhouse's murder, killing him off instead of bringing in another actor to take on the role.

Two more seasons continued that, one adopting a tropical adventure and the other taking the characters into space. In each of these Malory was a different entity with the same personality: a crime boss known as "Mother" in "Dreamland," a seen-it-all hotelier in the "Danger Island" season, and the physical manifestation of a spaceship's artificial intelligence in "Archer: 1999."

The 11th season's return to the primary storyline revitalized "Archer," bringing him out of his coma and into a reality that's moved on without him, and where it slowly dawns on him that maybe the world needs him a bit less than he originally, foolishly believed. He's still as narcissistic as ever, and with a physical limitation to boot (for which compensates with a cane that hides an assortment of state-of-the-art gear).

And it gave the plot precisely what it needed to extend the agency's exploits beyond the missions assigned to (and problems created by) one man. Season 12 maintains this restored momentum throughout the episodes made available to critics, and Walter is central to that. She's also irreplaceable, and that factor lends these episodes a slight sting.

The title of "Archer" refers to Sterling, of course, although Malory has always been the brains and toughened heart of the operation. But sometimes losing an essential presence in a story forces everything around them to transform more quickly than they would have otherwise.  After Archer wakes he's regularly reminded that everyone got on just fine in his absence. Some of the crew even improved. Losing Mother may push the plot beyond that, painfully maturing these childish characters into some version of adult responsibility. For now, fortunately, we can simply enjoy these final larks with Walter and Malory and not contemplate the inevitable final farewell we're barreling toward.