Withholding sex is not the answer to abortion bans: The spectacle of celebrity "pro-choice" activism

From calls for vasectomies to sex strikes, these out-of-touch suggestions reveal more about privilege than reality 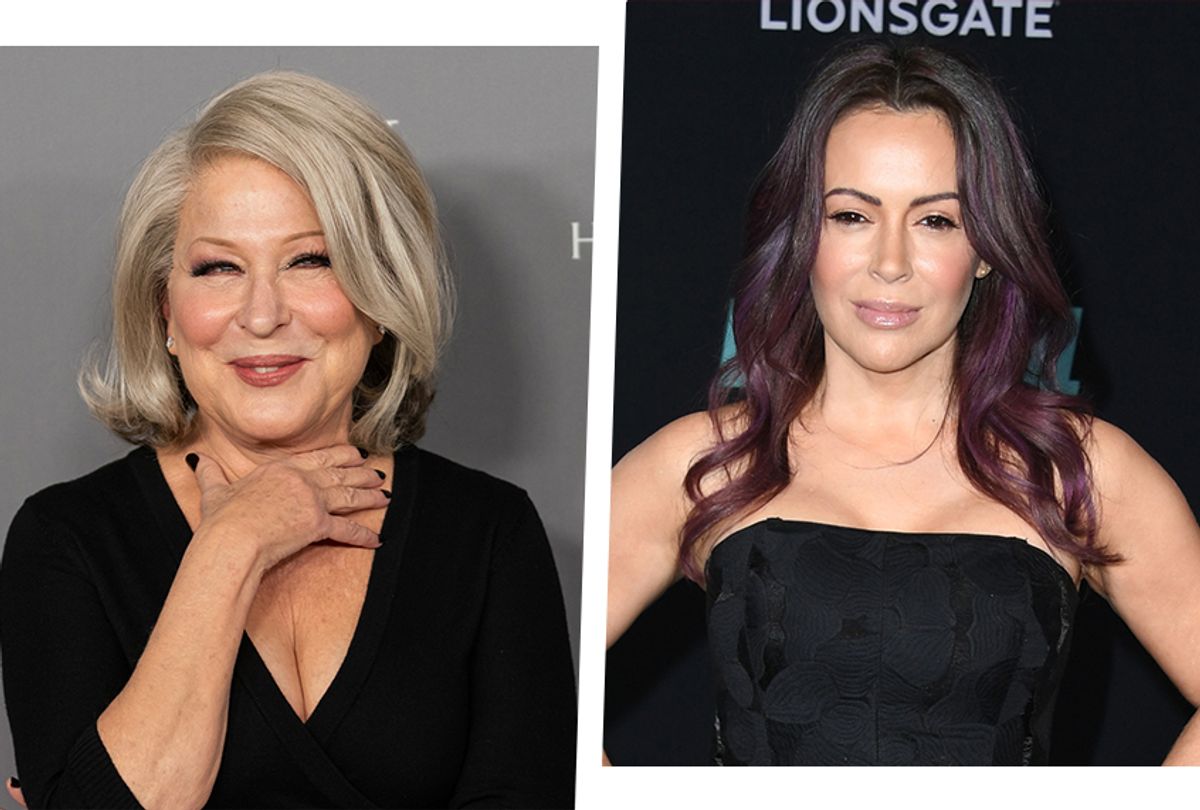 However helpless Texas' near-total abortion ban may make us feel, there are actually a lot of ways to help Texans get care. Unfortunately, there are also a lot of ways to not help. And we can always count on white celebrities to offer their well-meaning but clueless suggestions in their infinite, cringe-inducing predictability.

The day after the abortion ban took effect, beloved singer and actress Bette Midler was fired up with outrage as many of us were. She responded by taking to Twitter with what we can call, well, an idea:

"I suggest that all women refuse to have sex with men until they are guaranteed the right to choose by Congress," Midler wrote.

Apparently, this strategy seemed to appeal to a select group.

The concept of a sex strike isn't new. As Lynch points out, one of the earliest references to women withholding sex as leverage to try and sway men is in Aristophanes' comedy "Lysistrata." In the play, one woman tries to end the years-long Peloponnesian War between Greek city-states by convincing the women to deny sex to all the men of the land, which is supposedly the only thing any of the men truly want.

One could perhaps excuse this sort of reductive, gender-essentialist thinking because a man wrote it in 411 BC, but even this was insultingly limited for its time. After all, we're talking about the ancient Greeks, who had codified same-sex relationships as a sort of rite of passage for its boys and men. But even if everyone abided by such heteronormative definitions, calling for such "strikes" is just embarrassingly out of touch and glib — all the more so when matters are so grave in Texas, and soon, the rest of the country.

On Sept. 1, the Supreme Court allowed Texas' SB8 to take effect, effectively banning and criminalizing abortion in the state before most people are able to know they're pregnant, or get an abortion. SB8 goes the extra mile beyond your typical abortion ban, and deputizes people across the country as a citizen police force to stalk, surveil and sue people who have or help people have abortions, to possibly win at least $10,000 from these lawsuits.

Put simply, SB8 is a nightmare for pregnant people and those who help them, like the abortion clinics that will shutter across the state because of this law. It places people who provide abortions, people who have abortions, and even those who experience miscarriage but are suspected of self-inducing their miscarriage, at risk of criminalization — or, hey, if they're lucky, just exorbitant legal fees. The success of SB8 signals that the Supreme Court will enable similar bans like this in other states, across the country.

And we can expect more "sex strikes" and other ineffectual viral activism attempts from white celebrities to follow suit. After all, Midler isn't the first one to respond to cruel and dehumanizing abortion policymaking with a proposed sex strike.

In 2019, Alyssa Milano, the actor and activist who's long ruffled feathers over problematic, white feminist antics, called for one too, in response to the signing of a Georgia abortion ban. Georgia's law, which banned abortion care at six weeks, was ultimately blocked from taking effect, and Milano's "organizing" stunt faded into a cesspool of rightfully mocking memes, too.

It's not exactly clear why anyone would believe sex strikes challenge abortion bans or help those affected by abortion bans in any way. Perhaps the thinking here is that the strike will somehow work its way up to anti-abortion Texan state legislators or Congress members. And thus deprived, they will suddenly . . . reverse their actions? Obviously not.

For starters, these men will almost certainly never face the consequences of their legislation, simply because the women in their lives won't have to. Abortion bans notoriously only victimize poor people and disproportionately people of color, not rich, white Republican men's wives or mistresses, whose abortions will almost certainly be bankrolled. And plenty of anti-abortion legislators aren't just cishet men, but are also often white women, who are more than happy to participate in controlling the reproduction of low-income people of color.

These "strikes" also notably do nothing to actually help people affected by abortion bans, who need financial assistance and practical support to be able to travel to get abortion care where it's legal, or have medication abortion shipped to them.

On top of being unhelpful, "sex strikes" also raise serious questions about white "feminist" celebrities' understanding of sex as being solely for the enjoyment of straight men and not women. This sort of hollow gesture politicking bizarrely positions sex as a tool to use to please men, or something to withhold from them for bad behavior, rather than an empowering experience that all partners should equally and freely desire and enjoy. Sex, by the terms of white celebrity sex strikers, is a means for feminine manipulation, and the only way for cis women to gain power or basic rights in society.

The radical power of sexual pleasure

These proposed sex strikes should also raise eyebrows about why, exactly, white celebrities seem to assume so many women are having sexual relationships with anti-abortion men who need persuading in the first place. Let's be real: Men who don't think women and pregnant people own their own bodies don't exactly sound like generous, ideal lovers.

That said, there is a pervasive sense of whiteness and white, liberal femininity emitted by these strikes. By ignoring the reality of the people who are disproportionately affected by these bans, this then appears to call on white women, specifically, to make the supposedly great sacrifice of dumping anti-abortion lovers for some surface-level political statement.

The sex strike also elucidates a key difference between liberal, white, celebrity feminism and reproductive justice, a framework originally pioneered by Black women to understand reproductive and sexual health, as well as pregnancy and parenting, from an all-encompassing, intersectional lens. Reproductive justice demands more than the legal right to abortion. Among other rights, resources and supports, this framework also understands sexual pleasure for all as fundamental, rather than a performative bargaining chip. Sex and pleasure for those who enjoy it can cultivate radical joy, which frankly does more to protest and undermine heteronormative, patriarchal power structures than sex strikes.

The conception of a form of "protest" like the sex strike is one of several recurring consequences of celebrity activism that doesn't involve input from those affected by the horrific oppression du jour. Not unlike the blank black squares that flooded Instagram last summer, sex strikes are uniquely, comically out of touch and ineffectual, purporting to make a very public sacrifice that no one really asked for.

The pitfalls of celebrity activism that doesn't listen

What pregnant people in Texas, and the many states with radically anti-abortion legislatures do need is financial support, and organizing for legislative change. Actor Jameela Jamil, for example, might have shared information about the federal Women's Health Protection Act, rather than an inadvertently transphobic tweet about forcing all men to undergo state-mandated vasectomies. After all, contrary to the old adage that abortion politics would be different if men could get abortions, trans men do have abortions, and often face more barriers to get care than cis women face. For what it's worth, forced sterilizations are just as cruel and dehumanizing as forced births, no matter someone's gender.

Speaking of unhelpful, actually quite harmful white feminist slogans and talking points on Texas' abortion ban, Milano has taken to calling Texas the "Texas Taliban."  The insinuation here is that the state's abortion ban — which, again, could very soon spread to dozens of other states — is based on something foreign, that it isn't a product of decades of home-grown, American evangelical extremism. Policing and criminalizing pregnancy has been a pretty distinctly western and eventually American pursuit for generations now, contrary to the racist idea that any and all expressions of patriarchal control necessarily come from supposedly backwards, brown cultures.

Ultimately, the embarrassment and overall harm of sex strikes, or pithy but reductive memes about men controlling women's bodies, could easily be avoided by just asking Texan abortion providers and funds what is (and isn't) helpful. Do they need cash assistance, or signal boosts about the resources they provide? Do they need increased public awareness for a specific bill or upcoming rally? What are the most accurate, inclusive and destigmatizing ways we can talk about abortion?

Believe it or not, Texas abortion funds, who have long worked against tremendous odds to help disproportionately poor, people of color get abortion care, have yet to ask anyone to help out by going celibate. Instead, funds and organizers have been asking the public to pay attention to their work and the barriers they face for years, long before this current crisis was finally deemed worthy of mainstream media attention. To survive the war on bodily autonomy and reproductive freedom that's ramping up all around us, we should take our cues from organizers, rather than, say, Milano, Jamil or Midler.