Abortion funds and beyond: Here are the best ways to help Texans

Inside Texas' devastating, near-total abortion ban and how to support Texans 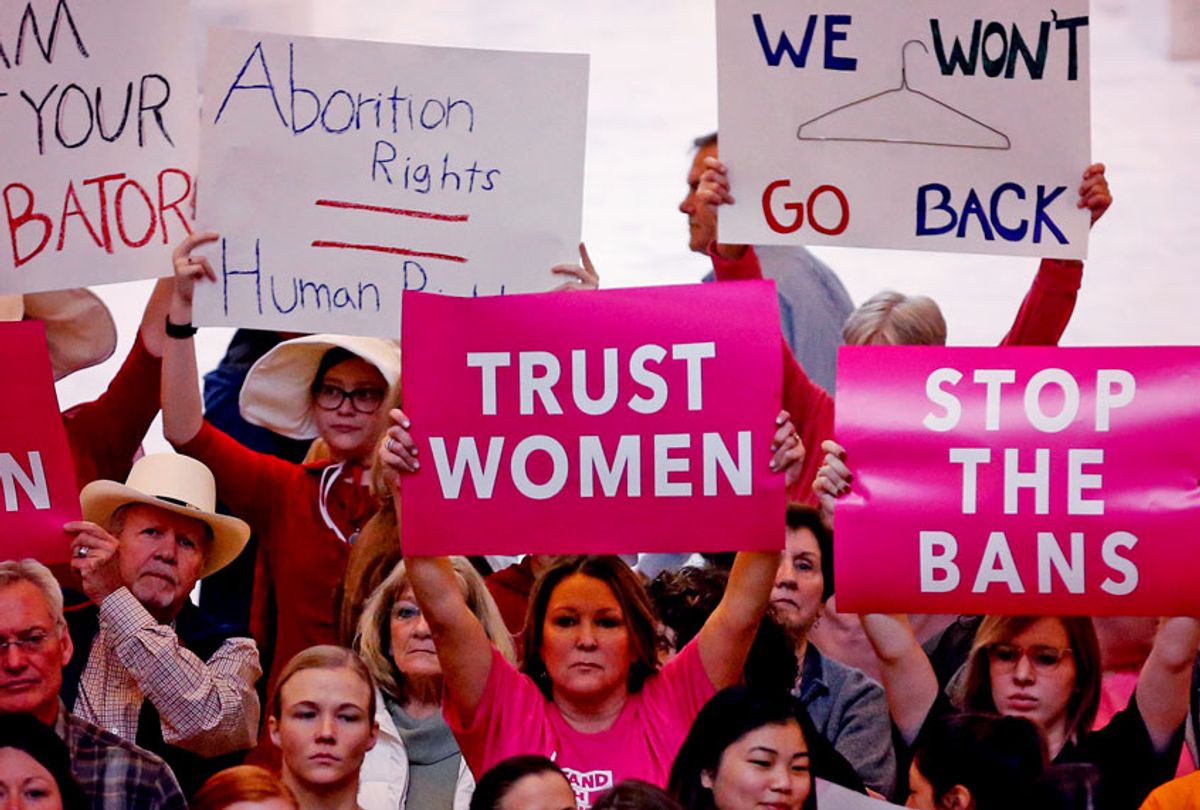 activists gather in the Utah State Capitol Rotunda to protest abortion bans happening in Utah and around the country, in Salt Lake City. About 39,000 people received treatment from Planned Parenthood of Utah in 2018 under a federal family planning program called Title X. The organization this week announced it is pulling out of the program rather than abide by a new Trump administration rule prohibiting clinics from referring women for abortions. (AP Photo/Rick Bowmer)
--

As of midnight on Wednesday, when the Supreme Court allowed a near-total abortion ban in Texas, abortion care at or after six weeks of pregnancy — AKA, before most people know they're pregnant, or are able to have an abortion — is banned in the state of Texas. And the cherry on top of this cake of cruelty and draconian reproductive coercion is that pretty much anyone can enforce it.

The newly enacted law doesn't just grant Gov. Greg Abbott and his Republican majority in the mostly white and male Texas state legislature the power to force people to remain pregnant or give birth without their consent, it also empowers and incentivizes local extremists to sue anyone who they suspect had or helped someone have an abortion.

"This is a dark day for Texans," Neesha Davé, deputy director of Lilith Fund, which provides a wide range of financial and logistical support for abortion access, said in a statement. "Our hearts break for the people who woke up this morning unable to access the essential, time-sensitive healthcare they need... and we will keep fighting for you." Providers in the state reported receiving more than 400 calls from patients seeking abortions by Monday afternoon, and being forced to tell callers they legally wouldn't be able to provide care after Wednesday.

"As a mom, physician, and Texan, I am deeply concerned for the people I care for and for my community," Dr. Ghazaleh Moayedi, OB/GYN and abortion provider, said in a statement. "This law deprives us of our basic humanity... [and] intends to intimidate and harass my colleagues and me, simply for doing what we were trained to do: provide high quality, evidence-based healthcare to our fellow Texans."

The aforementioned citizen policing feature of the new law is arguably the most disturbing part of it. There's a long history of extremist vigilantes policing and targeting their neighbors of color, a trend that's likely to be encouraged with the $10,000 in legal fees they can recuperate if their lawsuit is successful. Texas' latest abortion law will almost certainly be weaponized by vengeful co-workers, abusive exes, or otherwise nosy neighbors to stalk, surveil and harass suspected pregnant people around them.

Already, most states require some form of reporting abortions to the government, and we've seen more and more people arrested and jailed for self-managing abortions or miscarrying. This trend of surveillance and criminalization will only increase with a citizen police force, and a near-total abortion ban that will result in miscarriages being treated as criminally suspect.

Pending who you follow, an overwhelming sense of helplessness and doom has likely ensued on your social media timelines, and these feelings are entirely justified. We live in a country in which nine individuals — two of whom have very publicly been accused of egregious sexual misconduct — can rule on whether Americans have the right to housing in a pandemic, whether refugees are worthy of protection, and now, whether pregnant people have the right to bodily autonomy. And rather than hold public hearings, or at least pretend to listen to all sides, the Supreme Court has increasingly been making these most fundamental and consequential decisions about our bodies and lives in the shadows.

For those of us who don't live in Texas, or anyone who might not be directly impacted by the law, there's no excuse for inaction. Texas abortion providers, community abortion funds, organizers, health care workers, and certainly, pregnant Texans, have been doing the work for years, moving mountains just to help people reach a basic health care service that should be a human right.

In return for their herculean efforts, they've received unending harassment and violence targeting local abortion clinics, and never-ending mutations of the same dehumanizing abortion bans in the legislature each session. Even from so-called "pro-choice" liberals (as if abortion care has ever been as simple to access as a "choice"), Texan abortion advocates have often received condescending reassurances that abortion could never actually be banned, or, from some blue-state voters, snide suggestions to just magically vote these bans away next time.

It's past time for anyone who agrees abortion is a human right to actually do something tangible about this belief, and support the Texans currently standing in the eye of the storm. They can start by understanding first what's been going on in the state for years.

1. Educate yourself about what Texans have been up against.

To learn what's been happening in Texas requires more than following a couple national organizations like Planned Parenthood Action or NARAL on social media.

Across the state of Texas, 96% of counties lack an abortion provider, compared with 90% across the country. The state has some of the most complex and restrictive abortion laws in the nation, and not coincidentally, one of the highest maternal mortality rates in the industrialized world.

Texas has been at the center of the national abortion rights fight before: In 2016, the Supreme Court sided with Whole Woman's Health in Whole Woman's Health v. Hellerstedt on a law that imposed medically unnecessary requirements on state abortion providers, intentionally and successfully shutting down dozens of clinics. Between 2013 and 2016, more than half of the state's original 41 abortion clinics were forced to shut down.

Despite this ruling from the court, abortion care in Texas has remained virtually inaccessible through the years. Patients seeking abortion care in the state were forced to travel an average of 85 miles to their nearest clinic. This travel time, as well as mandated, paternalistic "waiting periods" and other requirements, have made getting an abortion in Texas a costly and exhausting if not impossible undertaking.

2. Instead of telling Texans what their options are, listen.

The majority of people who seek abortion care are people of color, already parents, and often struggling financially or on Medicaid. To have an abortion, they need to be able to afford exorbitant transportation and lodging costs, child care, and also be able to take time off work — not everyone can do that.

You'll hear often that this abortion ban in Texas isn't a huge deal, since pregnant Texans can simply "travel out-of-state" for care. But depending on where in the state they live, this may not be a viable option for them, especially during an ongoing, deadly pandemic.

You might also hear about how banning abortion doesn't stop it from happening, but only makes it less safe. This can certainly be true in some ways, and may have been true before the FDA's approval of medication abortion pills in 2000. But this statement, void of the context that self-managed abortion with medication is highly safe and effective, can be stigmatizing or damaging.

Naturally, in a state like Texas, which is increasingly making an effort to surveil pregnant people and regulate access to abortion medications, access to the medication will come with its own complications. This could even include criminalization, at a time when policing and criminalizing pregnancy outcomes with bogus "fetal endangerment" charges are on the rise. But nonetheless, it's harmful to not acknowledge that medication abortion is a safe option for someone, if they're able to get the pills online or through other means.

In other words, rather than try to prescribe options to Texans, consider educating yourself, and listening to and supporting them instead.

There's no need to reinvent the wheel, or declare on social media that you're moving to Texas to devote your life to facilitating abortion access. People on the ground are already doing this, and we should keep our focus on them.

Lilith Fund, Texas Equal Access Fund, Fund Texas Choice, Jane's Due Process, Frontera Fund, Buckle Bunnies Fund, West Fund, the Bridge Collective and Clinic Access Support Network are all abortion funds in Texas that are run entirely through community support and mutual aid. These funds have been supporting patients seeking care through massive legislative and logistical barriers for years, and they'll continue to find ways to support patients through this crisis, too.

You should be following, donating what you can, and getting those around you to follow and donate what they can to these funds, too. The Texas funds created an ActBlue donation link that allows you to split a donation between all of them at once, here.

4. Donate to and support Texas abortion providers and organizers over national organizations.

Texas' Afiya Center is dedicated to building upon the legacy and tradition of the Black women-led reproductive justice movement, organizing and advocating for comprehensive sexual and reproductive health care from a lens of racial justice. Avow Texas is a team of unapologetic, grassroots organizers dedicated to protecting and expanding abortion access in their state.

Instead of donating to or lifting up high-profile national organizations, consider supporting these Texas-based providers and organizers who have been doing the work in their communities for years.

5. Share resources on how people can safely get abortion care options online.

Educate yourself and share informational resources about the availability of reproductive health care options like medication abortion online. It's helpful to know your options if you're someone who could become pregnant. And it's important to be prepared to help anyone you know who might need abortion care someday.

Websites like Plan C and Abortion On Demand were created by public health researchers and providers, and can help anyone safely and legally find a way to access abortion pills. The doctor-run M+A Hotline is a confidential, private and secure hotline to seek expert advice on self-managing your abortion or miscarriage. If/When/How's Legal Defense Fund is available to offer legal or financial support to anyone who has legal concerns about their pregnancy or using medication abortion. If you or anyone you know is trying to self-manage an abortion, these resources and hotlines are vital to keep on hand.

6. Learn how you can support independent abortion providers near you, no matter where you live.

It's Texas today, but the success of SB8 sets a dangerous precedent for any state to potentially pass copycat legislation, or other extreme abortion laws. Find and support your local abortion fund, and your local clinic if you have one. Familiarize yourself with your state legislators and their voting records on reproductive health issues. Even if they already identify as "pro-choice," press them to take action to protect and expand abortion access. Let them know that this isn't a third rail, "women's" issue — it's a crisis that's already on our doorstep, and has been decades in the making.