Our endless demands on Simone Biles

The young woman has already achieved so much. How many more barriers will we ask her to break? 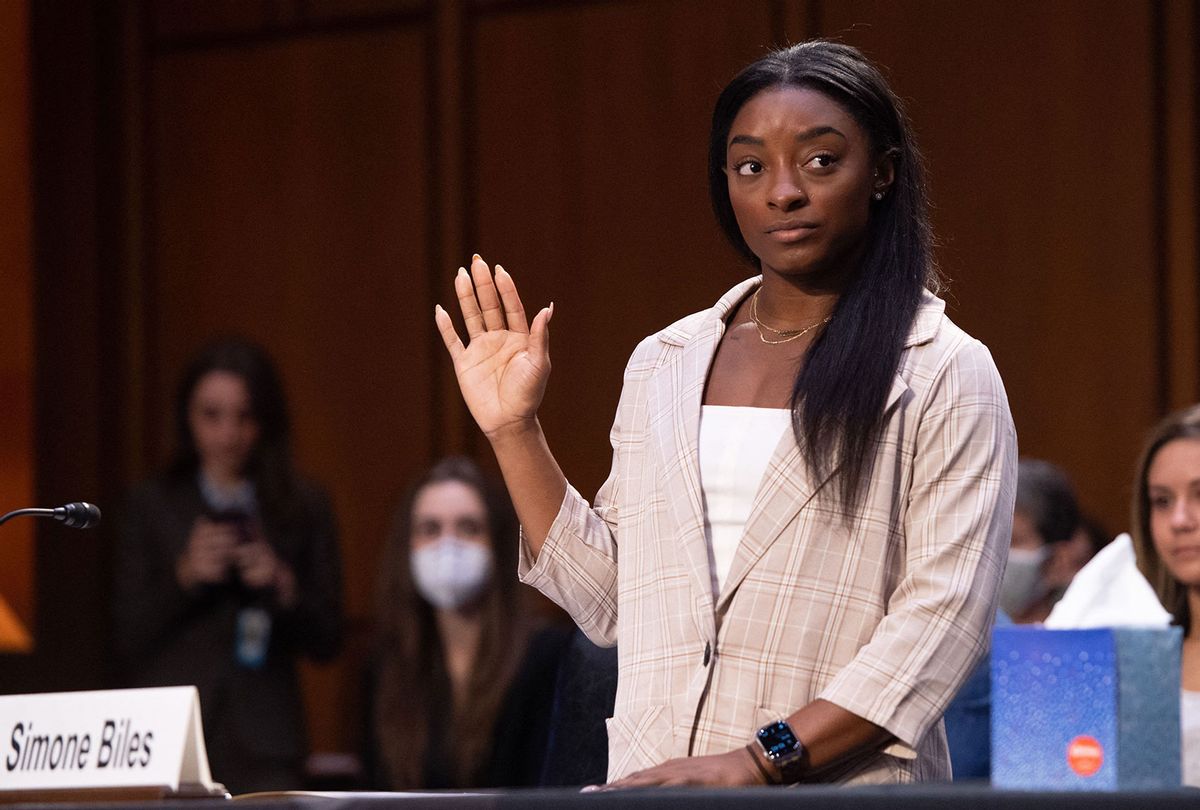 In the span of a week, the first Met Gala in two years took place, TIME revealed this year's class of the 100 most influential people of 2021, and elite gymnasts testified before the U.S. Senate about sexual abuse they survived, and the need for systemic change.

Simone Biles partook in all of these milestones.

She cemented her place as a cultural icon at the Met, and was recognized by TIME as a bonafide "titan." And Biles still had it in her to deliver a a heart-wrenching and widely shared testimony before the Senate on how "an entire system" enabled rampant sexual abuse against women's gymnasts, and the importance of protecting future generations.

Even fresh off of the Tokyo Olympics, Biles remains as active and important as ever. Yet it's clear that beyond being one of the most decorated athletes in history, she's more than just a sports idol to young girls and women.

Biles is remarkable because she's broken so many barriers, achievements that any regular person would be praised for, much less someone who's only 24. But rather than celebrate her, we consistently ask Biles to do more, be more — and every single time she steps up and goes beyond.

By now, most of the world is familiar with Biles' many records broken, medals won and moves pioneered. What she represents is encapsulated in tennis legend Serena Williams' tribute to the gymnast in TIME:

There's something poetic about the way Simone Biles moves. She's a master of precision, grace and dominance, and at the age of just 24, she has cemented herself as one of the most decorated American gymnasts of all time. But when she's not on the mat or competing in front of the world, Simone strikes the powerful balance between humility and confidence . . . Simone's athletic achievements are seen once in a lifetime.

What she embodies truly reflects the endless potential of Black women. I wish I had her to look up to when I was younger and trying to realize my dreams.

The first part nods to Biles physical achievements, but the second points to why those achievements are so often belittled or questioned. Not despite but because of her prowess, Biles has often faced punishment, retaliation, and accusations that she's somehow rigged the game. The new moves she pioneers have been devalued in the points they've received from judges, or even docked points, supposedly to discourage other gymnasts from trying them and hurting themselves. Some critics have suggested her participation in competitions is unfair to other gymnasts, where white, male athletes are often celebrated for having exceptional skills.

The unequal scrutiny given to Black women athletes means that Biles has had to become the face of excellence while simultaneously enduring criticism for it. That has also extended to her recent decision to not perform when others demanded that she do so.

Biles' detractors were at their loudest when she bowed out of some of the competition events at the Tokyo Olympics this summer, in light of mental health struggles, which could have placed her physical safety at risk, if she competed in the wrong headspace and injured herself. Yet, in this decision and in Biles' commitment to her health, wellness and safety, she broke another barrier — and arguably the most important one, yet. She showed us all the power of taking care of ourselves, and taking our mental health seriously.

In a world that makes so many demands of each of us, and has made especially exhausting, heinous demands of Biles in particular, saying "no" and protecting our bodies and minds is a vital survival skill. And it's one that few of us have been taught — at least before Biles' remarkable decision in Tokyo.

Again, Williams points to this important contribution by Biles in her TIME tribute:

Simone's greatest work, however, is what's being done outside of the gym. She is using her mature voice and platform to share her personal journey of self-love, respect and acceptance — Simone is wise beyond her years. By living her truth so loudly and by championing mental health, she is setting new standards of beauty, strength and resilience, breaking down today's image-obsessed stereotypes and encouraging others to do the same. Simone is a shining example of what success looks like when you let go of what the world thinks and gather your strength from yourself . . . from your soul.

Even prior to Biles' prioritization of her mental health and safety this summer, she's been pressured to speak and be vulnerable about a range of deeply personal matters on the world stage. When her medical records were made public in 2016, Biles was all but forced to speak publicly about her struggles with ADHD, and courageously took a stand to destigmatize the mental health condition. She's also spoken publicly about being adopted, and her struggles at a young age in foster care.

But one of the most powerful pieces of Biles' legacy is not mentioned in the TIME piece: her dedication to survivors like her, and the honesty and vulnerability with which she's shared her experiences as a survivor of Larry Nassar. In 2018, Biles shared a statement on social media that read, "Please believe me when I say it was a lot harder to speak those words out loud than it is now to put them on paper. There are many reasons that I have been reluctant to share my story, but I know now that it is not my fault."

She continued, "For too long I've asked myself, 'Was I too naive? Was it my fault?' I now know the answer to those questions. No. No, it was not my fault. No, I will not and should not carry the guilt that belongs to Larry Nassar, USAG and others."

Since coming forward, Biles has testified and spoken publicly about the abuse she suffered on numerous occasions, all in an effort to demand accountability from the systems that harmed her, and create systemic change to protect future generations of athletes.

"I don't want another young gymnast, Olympic athlete or any individual to experience the horror that I and hundreds of others have endured before, during and continuing to this day, in the wake of the Larry Nassar abuse," Biles said before the U.S. Senate on Wednesday.

Following her withdrawal from some Olympic events this summer, Biles admitted that the trauma and "scars" of Nassar's abuse still affect her to this day, and impacted her mental health in Tokyo. Before the Tokyo Olympics, Biles alluded to how the strain of uncertainty throughout the pandemic had made her consider retiring. But she reconsidered for at least one specific reason, revealing on the "Today" show earlier this year that she chose to participate, so that we would have to remember the abuses committed by Nassar and enabled by others. "I feel like if there weren't a remaining survivor in the sport, they would've just brushed it to the side," she said.

Biles told the "Today" show she dedicated her performance at the Tokyo Olympics to sexual assault survivors, and told the New York Times, "At the end of the day, I am not representing USA Gymnastics."

Testifying, speaking out and competing through trauma aren't all she's done to advocate for the health and safety of her fellow athletes. When they were left without a central training center after it became clear that Bela and Marta Karolyi's Ranch created an atmosphere of abuse that led to injuries, mental issues and had enabled Nassar, Biles offered an alternative. Biles and her family built World Champions Centre, a new gym in Texas where Team USA could train in safety and with transparency.

"The Biles family built an observation room overlooking the gym floor and encouraged parents to watch," reports Texas Monthly. "All parts of the gym are clearly visible to observers, making it difficult to hide abusive coaching."

What more can we demand of Simone Biles?

Biles' status as an American legend has often resulted in her name, her decisions, and her traumas being baked into the usual inane and dehumanizing conservative versus liberal culture wars. Liberals who revere Biles have often inadvertently painted over her humanity and susceptibility to human struggles by treating her as a god. Conservatives — whose idea of performing before worldwide audiences is speaking on Ben Shapiro's podcast — have disparaged her as a coddled snowflake for stepping down in Tokyo.

U.S. Senators, political leaders and cultural icons constantly praise Biles' bravery as a survivor and leader for all that she's had to advocate for. But like all survivors, Biles has had no choice but to be brave because of massive systemic failures — failures that have fallen hardest on Black women and Black athletes.

Similarly, Biles has broken so many barriers because she's had no choice but to break them. That may be inspirational and uplifting, but it's also deeply frustrating when we take a step back and question why all of those barriers, abuses, mistreatment and double standards were placed before her, to begin with.

So, how many barriers does Biles have to break? How much do we have to take from the 24-year-old athlete before we listen to her and enact meaningful change?

Biles' testimony before the U.S. Senate this past week was a culmination of all that we've selfishly and unfairly demanded of her through the years. She must be not just great but exceptional, to compete through the weight of unspeakable trauma, to pave the way for entire generations, to weather endless and interwoven racism and misogyny.

Someday, another young, Black, female athlete won't have to weather the same degradation, or overcome the same impossible odds to be great — and it will be because of Biles and her sacrifices.