Democrats have the GOP playbook: They know how to fight back, but just won't do it

There's no more doubt about the threat the Democrats face. They see it clearly — but will they do anything? 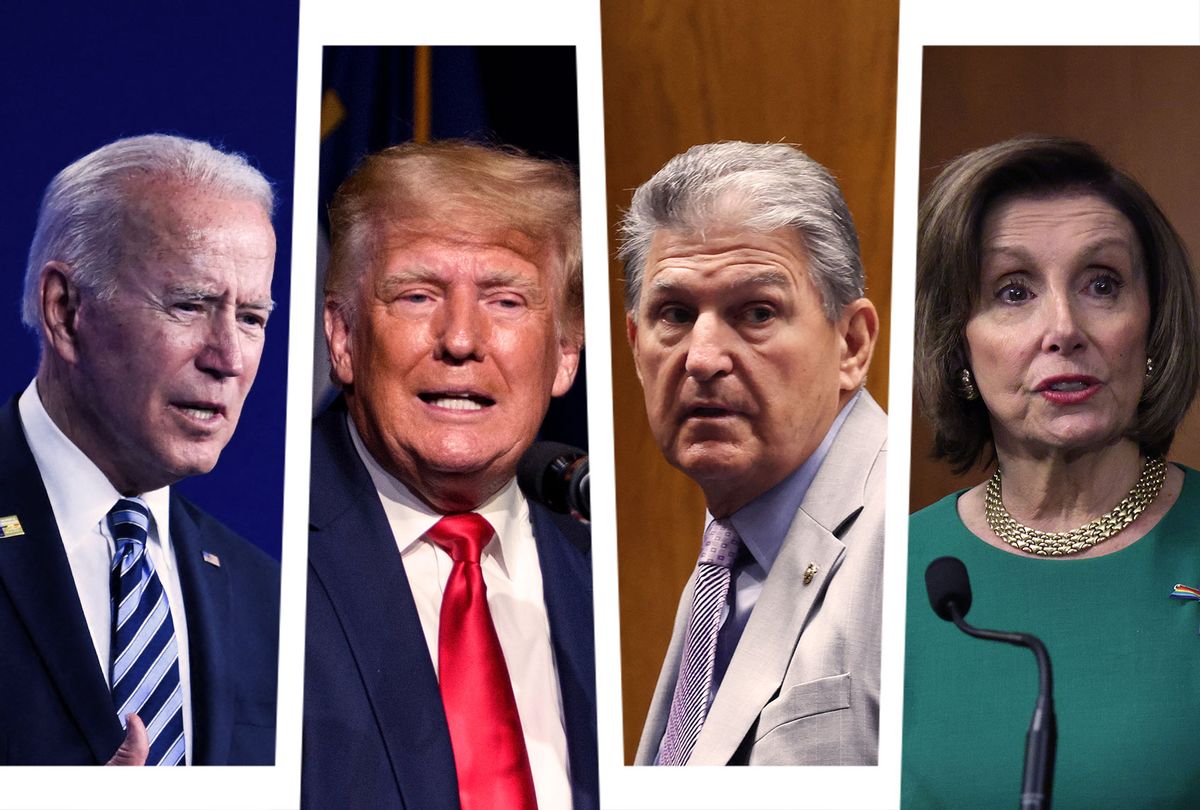 The Republican Party and the larger neofascist movement it represents are boldly, shamelessly and relentlessly attacking American democracy. The campaign is nationwide and multi-spectrum: Almost every aspect of American society is being targeted. This includes basic understandings of reality and the truth, science and expertise, democratic institutions, education, public health, the environment, the economy, the free press and the First Amendment, civil and human rights, pluralism and secularism, and the social contract and the Common Good more generally.

These attacks also involve political violence in its many forms, including the insurrection of Jan. 6 and the slow-rolling coup attempt associated with it, a long history of stochastic terrorism, inspiring and unleashing right-wing street thugs and various other acts of violent intimidation and threats.

At this point, it's unremarkable. Most of us just roll our eyes, & even as we loathe this, accept it as inevitable. We've normalized Chekov's gun — the one in the 1st act — & we continue as if the next act isn't coming....

Many reassure themselves that the rightwing cosplayers with assault rifles aren't "real" soldiers. Neither was Kyle Rittenhouse, who killed two. And, unfortunately, a fair number do have military training. The threat isn't apocalyptic, but it's real.

The Republican-fascist movement's end goal is to reduce American society to rubble in order to rebuild it in their own image. They will not stop until they win — or are comprehensively defeated and vanquished from public life.

There can and will be no compromise: The Republican-fascist movement sees its war against multiracial democracy as an existential struggle to protect "Western civilization" against "white genocide" or "replacement."

That no such thing is happening — white people maintain control and dominance over every aspect of American society is irrelevant. Fascism is not based on the truth or reality; it is a self-contained lifeworld.

The Republican-fascist movement is so confident in its ultimate success that it announces its plans and intentions to the world. Why not? There is very little sustained opposition -- at least to this point. Joe Biden is president and the Democrats technically hold (exceedingly narrow) majorities in the House of Representatives and the U.S. Senate. But the Democrats' tenuous hold on power weakens under the looming shadow of the Age of Trump. When the Republicans in all likelihood regain control of the House next year, that looming shadow may become a lead blanket.

It is a sad thing to see how the Democrats have the Republican-fascist movement's playbook in their possession but are unwilling or incapable of using it themselves.

For at least five years, Donald Trump and his spokespeople repeatedly announced that he would not respect the results of any election if he did not win.

The fake "audit" in Arizona (coming soon to Texas and other states) is part of a much larger strategy of delegitimizing democracy and replacing it with a Republican-fascist autocracy.

For more than five years a chorus of public voices, including mental health professionals, repeatedly warned America and the world that Trump was suffering from mental pathologies, and might be a sociopath or psychopath. They also observed that he feels contempt for democracy, is an instinctive white supremacist, is capable of destroying American society and the world in service to his own narcissism and rage, and that his presidency would lead to national or global disaster. All of that was true.

Democrats and the "resistance" also have access to the many books, articles, policy briefings, videos and other information that detail how for decades the Republican Party, "movement conservatives" and their allies have been planning to overthrow America's multiracial democracy. Too many mainstream liberals and progressives convinced themselves that those plans were idle fantasy. The horrors are real.

Salon executive editor Andrew O'Hehir recently described the perilous position of the Democratic Party as it faces the Republican-fascist movement, first observing the Democrats' repeated pattern of winning electoral majorities and then failing to govern effectively:

More important than any of that, although absolutely related, is how Democrats have responded to the obvious Republican assault on democracy over the last couple of years, in the manner of a truckload of Brookings Institution scholars stuck in cold molasses, determined to consider all sides of the question fairly and not to let anyone accuse them of acting hastily. I'm not suggesting that Joe Biden and Nancy Pelosi and Chuck Schumer haven't expressed genuine alarm or said more or less the right things, because they have. But as you have perhaps observed, they haven't leveraged those words into action: They haven't ditched the filibuster or expanded the Supreme Court or passed any of the bills in front of them that are meant to fortify the right to vote, for the love of Jesus Christ.

This isn't a nice thing to say about a bunch of mostly sane and approximately reasonable people, but here's the truth: If you set out to design a left-center political party that was fated to surrender, little by little, to authoritarianism — because of circumstances beyond its control, because of internal indecision and ideological fuzziness, because it faced an entrenched and deranged opposition party, because of whatever — you could hardly do better than the current version of the Democratic Party….

If Democrats lose conclusively to those people, then they deserve it. That's a dark path, perhaps darker than any of us wants to contemplate. But I think there's no avoiding this date with destiny, for the Democrats or the Trumpers or our entire so-called democratic experiment. If you see another one, light the way.

As O'Hehir describes, the Democratic Party is hunkered down in its own version of the Maginot Line while the Republican-fascist movement has outmaneuvered and encircled them. What can the Democrats do at this point to fight back and defend American democracy? First, they need to reorganize and rally their forces.

They must counter the Republican-fascist movement at every point across the political battle space. Corporeal politics are essential here: Democrats and other pro-democracy forces actually outnumber the fascist-Republican forces, but the latter are better organized, better financed, more clearly focused and possess a clearer understanding of optics and propaganda. As a result, they are able to amplify their power far in excess of their actual level of public support.

At Trump's rallies, when his right-wing street thugs and other followers march and otherwise assert themselves; at public hearings and other political gatherings; and across society more generally, Americans who support democracy must make their presence felt in large numbers.

Corporeal politics in this moment of crisis will also necessitate a nationwide campaign of direct action, including sit-ins, protests, mass marches, a potential nationwide strike and boycotts targeting the companies and individuals who finance the Republican Party, the right-wing propaganda machine and the neofascist movement.

Ultimately, because Joe Biden and the senior leaders of the Democratic Party appear unable, unwilling or unprepared to take the bold actions necessary to save American democracy — for starters, ending the filibuster, expanding the Supreme Court and enacting laws that protect and guarantee the right to vote — the American people must force them to act.

I am not prepared to succumb to defeatism yet. But at this point, we must confront the possibility and perhaps even probability that today's Democratic Party is fundamentally incapable of doing what is necessary to protect American democracy against the Republican-fascist movement.

In boxing and other combat sports there is the truism that "styles make fights." Today's Democratic Party and its leaders may simply not possess the style that is required to defeat the resurgent and highly organized forces of the right. Another lesson may be drawn from boxing as well. Sometimes a once great fighter, perhaps on a subconscious level, wishes that the fight would just end. He is being pummeled by his adversary and convinces himself that being knocked to the canvas and left staring up at the lights will offer a form of dignified relief.

I don't think that the Democratic Party has quite reached that point. But based on its leaders' unwillingness to fight back effectively against the Republican-fascist movement, I worry that sooner or later — and probably sooner — the decision to surrender and negotiate a form of "peace in our time" will be made.