In the limited series, a woman flees an abusive boyfriend, only to repeatedly be forced back to him 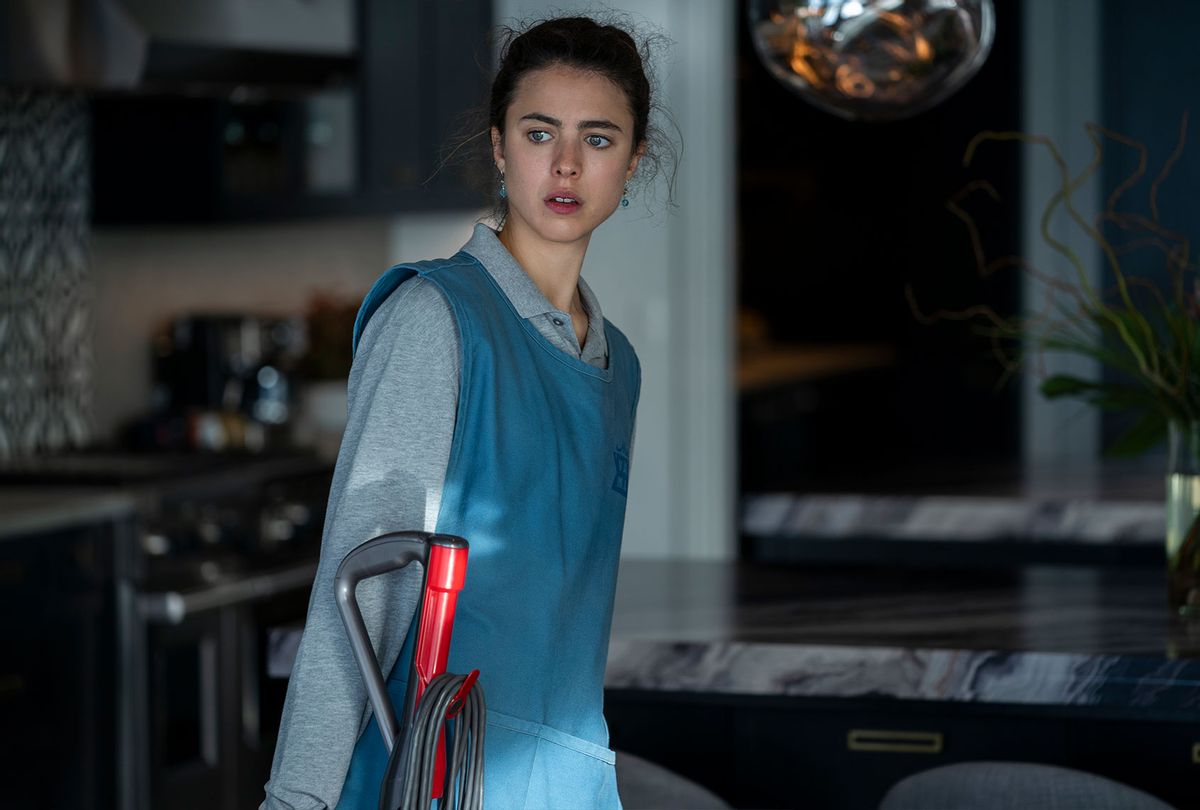 Netflix's new series "Maid," adapted from Stephanie Land's memoir, follows a desperate woman left virtually alone as she tries to free herself and her daughter from an abusive relationship. After fleeing her abusive partner Sean (Nick Robinson), young, single mother Alex (Margaret Qualley) is in and out of shelters and left trying to make ends meet as a house cleaner in order to provide a life free of fear and control for her young daughter Maddy (Rylea Nevaeh Whittet).

Throughout the series, Alex faces the reality that it's not just her boyfriend who's entrapped her, but a range of factors, like the government's lacking support systems, or other men who enable Sean. The limited series' expansive cast of male characters are all uniquely toxic, and even violent on varying levels. Their behaviors expose the many ways women like Maddy can face abuse even when it's not in the form of physical violence.

As the story begins, Alex flees Maddy's alcoholic father after he punches a wall, sending shattered glass into Maddy's hair and almost hurting her. And while it's clear Sean has never physically attacked Alex or Maddy directly, Alex quickly realizes a devastating truth that many victims of domestic abuse have often faced: seeking help and being taken seriously might have been easier for her if her partner had been physically abusive. "Maid" demonstrates how multiple forms of domestic abuse exist, and the illogical barriers and gatekeeping in place that often keep victims like Alex from receiving the help and resources they need.

The government is no help

At different points in "Maid," Sean controls Alex's finances, her access to a car and phone, her access to the outside world and relationships with other people, and even her access to Maddy, their daughter. On top of this, when Alex first leaves Sean, she struggles to even prove to the government that she needs help, because of the lack of physical violence from her abusive relationship with Sean.

When she seeks help from a social worker, she's told to file a police report. "And say what?" Alex asks. "That [Sean] didn't hit me?"

As the series progresses, we're treated to different glimpses into the barriers that prevent Alex from breaking away from her old life. Even crashing at a friend's house is out of the question when Alex learns that Sean had called Alex's friend, and was already on the way over to catch her.

Alex also struggles to get free from this devastating cycle, because of the tangled web that is being a working, single mother in poverty. But she can't apply for subsidized housing without a job, she can't get a job without child care, and she can't apply for daycare without having a job. She's stuck.

Throughout "Maid," we witness the many ways domestic abuse and intimate partner violence can unfold beyond physical attacks. Lacking government programs all but force victims like Alex to remain with their abusers in some capacity, or lose housing for themselves and their children — and even lose access to a phone, an income, food, health care, and other basic needs, too.

At one point, Alex even loses custody of Maddy to Sean, who only gives up full custody when he realizes how taking care of Maddy triggers his alcoholism. This experience isn't rare; many poor mothers with abusive partners are punished for struggling to parent while facing abuse, living below the poverty line, and receiving no help.

The men who enable Sean

Throughout "Maid," Alex is repeatedly denied agency and entrapped in complex, seemingly inescapable webs created or enabled by Sean, the government, and even two other men who are close to her.

The abuse she faces from Sean doesn't happen in a vacuum.

Alex is initially rescued by Nate (Raymond Ablack), a man who is not-so-secretly in love with her and immediately positions himself as her savior. He takes Alex and Maddy in, gives them food and housing, and even provides them with a car. But when Nate eventually seeks to cash in on his support for Alex by asking her out on a date, he's unable to comprehend her clear refusal: "I don't think I can be with anybody right now."

He also doesn't realize that, as Alex points out, he's putting her in a difficult position because of the vastly different power dynamics that underlie their situation.

"You are the only difference between us sleeping in a bed and sleeping in the streets," Alex explains. "It's not equal between us."

Nate just doesn't understand: "I don't really care about that stuff, I think you like me and I know I like you. That's equal, right?"

Of course, if Nate's inability to take no for an answer didn't sufficiently burst his "nice guy" facade, his subsequent actions do. When he finds out Alex had a sexual encounter with Sean, Nate throws her and Maddy out. It's pretty clear he never actually cared about her at all, and that his supposed generosity was merely transactional — once he didn't get what he wanted, he couldn't care less what happened to Alex. Nate's actions force the mother and daughter to move back in with their abuser, and essentially prove Alex's point about the dangers that can come with highly unequal relationships like theirs.

Soon after Alex and Maddy return to Sean's house, it becomes clear he intends to entrap and refuse to let them leave. And even though Nate allowed Alex to keep the car, he's since reclaimed it thanks to Sean, which means she's stuck once again with her abuser.

The series also gradually reveals that the pattern of abuse in Alex's life began with her semi-estranged father Hank (Billy Burke), who is also an alcoholic like Sean. Throughout Alex's upbringing, he at times became abusive toward her, and ends up unsurprisingly enabling Sean in harming Alex and Maddy.

Hank bears witness to Sean's abusive behaviors and his alcoholism, but the two men have bonded and become close friends through attending the same AA meetings together. When Alex's custody of Maddy is on trial once again, Hank refuses to testify against Sean. Instead, he blames Alex for her own situation, a typical manipulative tactic by abusers to force victims to remain victims.

Alex's eventual triumph at the end of "Maid" is even more meaningful in the context of all the men who came together in a real group effort to ruin her life.

Stories of abuse should take a page from "Maid"

"Maid" follows a growing and important trend of more nuanced, survivor-centric media representation of gender-based violence — specifically, as it lacks the typical, gratuitous displays of physical violence against women. For years, on-screen portrayals of domestic and gender-based abuse solely as physical acts have misled audiences into thinking this is the only legitimate form of abuse, and resulted in the toxic judgment and gatekeeping of the experiences of survivors.

But more recently, we've seen important change. The plucky, feminist adult cartoon "Tuca & Bertie," which in one episode explores a main character's ongoing trauma stemming from sexual assault, very deliberately excludes a scene of the assault, to instead center the survivor, and not allow anyone to judge or question the survivor's reaction to her trauma. The 2020 movie "Promising Young Woman," which follows one woman on a quest to avenge her friend who was sexually assaulted, centers almost entirely around the aftermath of the assault, without ever featuring it.

"Maid" furthers this trajectory of improving storytelling around gendered violence, by not only deliberately excluding portrayals of physical violence, like the aforementioned projects, but also impressing upon audiences that domestic violence isn't just physical. Violence can also entail controlling someone's contact with the outside world, taking away their options, forcing them to choose between being with you or sleeping in the streets. As onscreen stories about gender and abuse continue to grow, explore new territories, and challenge long-held narratives, future stories should follow the example of "Maid," and shine light on the experiences and resilience of survivors of all kinds of violence.

"Maid" is currently streaming on Netflix.

[CORRECTION:  A previous detail about Nate reclaiming his car was fixed to indicate that it was returned to him.]