The return of "Tuca & Bertie" sings, while ruffling some patriarchal feathers for the good of us all 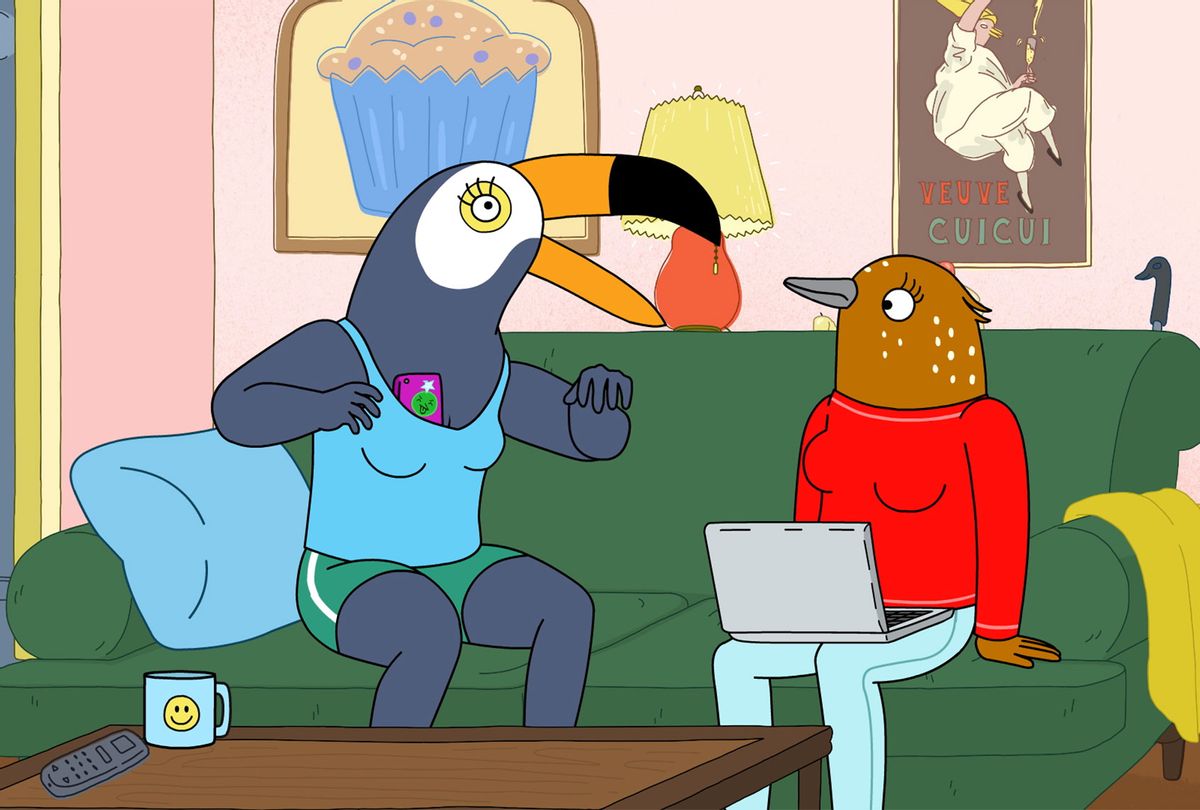 "Tuca & Bertie" marks its second season arrival on Adult Swim politely, but once it dispenses with new arrival niceness it lets loose with where it stands on misogyny by way of a third episode musical statement. "A bro is a schmo who can do anything!" sings a co-worker of Bertie's who is both a rooster and the ruder alternate term for a rooster.

Then a fellow female co-worker pirouettes into frame and offers, "Or you could be a simple sweetie and still uphold the patriarchy!"

Creator Lisa Hanawalt has enough experience in the world of animation to be familiar with all the ways the industry caters to men, along with society at large. Her show is one of the few animated respites from the bro-niverse out there – a sanctuary, but not an exclusive one, and not devoid of contributions from guys.

Still, the fact that this animated series formerly nested on Netflix won a slot on a programming schedule targeting young male viewers is a sign. Two years ago "Tuca & Bertie" landed as a bold animated series about claiming one's agency and surviving trauma, disguised as a fun-loving 'toon about Tuca, a fun-loving toucan (voiced by Tiffany Haddish) trying to find herself and her best friend Bertie, a tightly wound but endlessly lovable song thrush (voiced by comedian Ali Wong).

Bertie works in an office to pay the bills while baking pastries as a side gig. In the first season she lands an apprenticeship with celebrity baker Pastry Pete, who eventually triggers Bertie's long buried memories of being sexually assaulted at camp. Hanawalt's steering of the storyline is revolutionary in a number of respects, foremost being her conveyance of what happened to Bertie without actually showing her assailant or, as my colleague Kylie Cheung points out, the assault itself.

Examinations of this subplot abound, but it's not all there is to this show's magnificence, as that musical interlude demonstrates. That happens in the third episode and by that point it is thoroughly established that "Tuca & Bertie" has settled into its new home. Tuca and Bertie haven't blithely moved on from what's happened before, however.

Instead they're gliding from Bertie's first season disclosure into her next steps, which happen to align with current discussions about the toll the last few years has taken on our collective mental health.

The season premiere finds Bertie flitting between counselors in a desperate search for a therapist who can help her with her crippling anxiety, an exhausting quest that leads her back to her reliable sources of support, Tuca and Bertie's gentle boyfriend Speckle ("Minari" star Steven Yeun).

Tuca is still searching for romantic companionship and purpose, remaining adamantly devoted to her sobriety. Trusting that the title characters never be done with each other is the reliable core of the show.  Now that we're familiar with them, though, the story pushes harder on the individual issues that require tending. Inevitably they fall short of each other's expectations, as is the case during a wild girls trip adventure to the adult playground known as Planteau, a Vegas of sorts, populated by sentient plants.

But this relaxation into the show's next phase also allows the writers to break through the veneer of each individual's colorful cheeriness and bulk up their psychological complexity. The Tuca-centric "Nighttime Friend" provides insight into Tuca's irrepressible confidence by tagging along with her heretofore secretive night-owl adventures.

Certainly a slice of the audience could have related to her sleeplessness back in 2019, but now that pandemic-related insomnia is a common as cicada swarms, the otherworldly quality of the piece holds fresh meaning. In every episode Hanawalt and the rest of the creative team, including fellow executive producer Raphael Bob-Waksberg, with whom she worked on "BoJack Horseman," strike a balance between the loopy lightness of this anthropomorphic animal world and the shadows each character is navigating.

Here we're reminded that Tuca's positivity is genuine, but it's also compensating for some deeply rooted issues. It also highlights Yeun's contributions as Speckle, an even-keeled constant in all these stories for his unwavering faith in his girlfriend and best friend and as unexpected comic relief. He's also one of the means by which "Tuca & Bertie" demonstrates that shows created in and for the female gaze are inclusive and appealing to everybody – which was why there was such as outcry over Netflix's premature cancellation of the show in the first place.

That Adult Swim saved the show speaks to the truth of that statement. While the network is still very much aimed at young men, introducing "Tuca & Bertie" to its lineup speaks to a desire to inspire socially relevant conversations with its programming. Not long ago its lineup was mainly kept alive by the likes of "Squidbillies" or "Robot Chicken" and "Family Guy" repeats leading into late-night anime. Those remain, along with airings of the less aggressive and smarter "Bob's Burgers" reruns. But if "Rick and Morty" lends a dark intellectual legitimacy to its stoner palace, "Tuca & Bertie" smartly perks up the lineup, reminding us of the many ways that animation tells multi-dimensional stories that speak to everybody, not just the guys.