Where other filmmakers tried and failed, Denis Villeneuve has wrestled the dense novel into a cinematic masterpiece 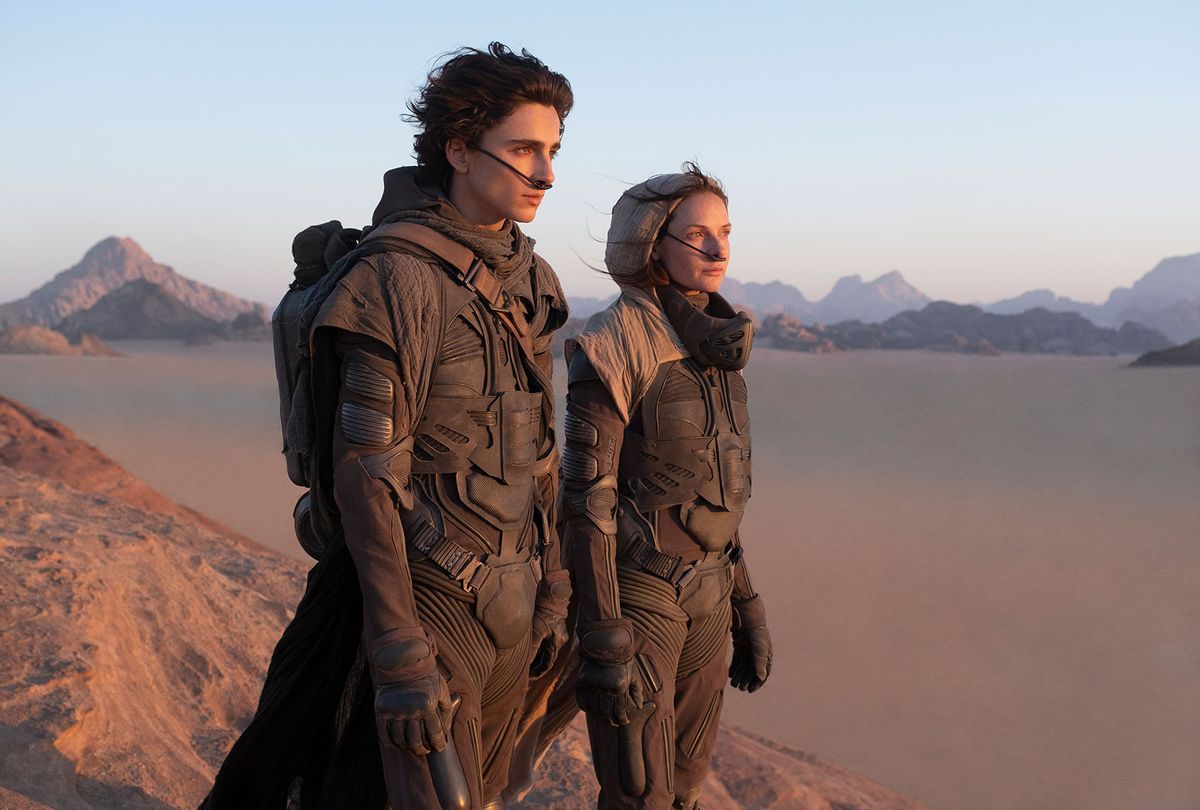 Adapting Frank Herbert's "Dune" for the screen has proven to be somewhat akin to ingesting the potentially fatal sandworm bile known as the Water of Life. Men may not have died in the attempt, but those who tried failed to adequately transmute Herbert's full vision.

That alone is reason enough to appreciate Denis Villeneuve's mesmerizing interpretation of this sci-fi masterpiece, the release of which was delayed due to the pandemic. His take on "Dune" isn't merely fascinating and narratively coherent. It is a gorgeous sensory immersion that holds us in its spell for hours, with an ending that sparks yearning to see what comes next.

The "Blade Runner 2049" fandom likely expects this, given the confidence with which Villeneuve's 2017 sequel honored Ridley Scott's 1982 classic while assuredly evolving its timeline. One might even think of that movie's evocation of a futuristic Las Vegas as a trial run for the filmmaker's version of Arrakis, except his desert planet isn't a ruin but a place of forbidding beauty, dressed in velvety waves of sand and life-sustaining spice.

But any concerns surrounding various "Dune" remakes have less to do with a creator's track record than their ability to successfully wrestle Herbert's dense, extensively branching mythology into a form newcomers can grasp and people conversant with the text can appreciate. "Dune" may have defeated David Lynch in 1984, but it didn't ruin him; time has transformed the convoluted debacle into an oddball classic many view with affection.

Villeneuve mitigates the novel's perilous complexity by presenting it as a two-part journey instead of trying to jam the entire tapestry into a single pass. This approach invites us to consider this movie as the world-building chapter of what could, and should, become a franchise chronicling Timothée Chalamet's youthful Paul Atriedes' maturity from an uncertain youth tossed into the wilderness into a messiah who threatens to rearrange the social order.

The main caveat to this approach is that it bucks the modern cinematic tradition of such stage setters. Moviegoers are used to entering epics on a fast-moving current of explosive clashes and heart-pumping skirmishes leading up to a final battle. Be warned, then, that anyone expecting an equivalent to the Death Star exploding or sword-wielding heroes slicing up goblins and orcs may be disappointed by how heavily "Dune" skews toward establishing the political intrigue at the heart of Herbert's mythos.

Without laying this foundation, no filmmaker could easily navigate the story's merger of religious motifs, environmental degradation, colonial exploitation, and industry-driven politics.

That Villeneuve charts that path as deftly as he has here is a testament to his storytelling skills and his awareness of both the limitations of the standard theatrical format and the audience's patience for detail. Lush and complex as his adaptation is, this "Dune" also strips down the primary plot to the essentials, first by introducing the prodigious rivalry between Houses Harkonnen and Atriedes, the two most prominent families in this futuristic empire.

The Harkonnens are cruel, barbaric overseers of Arrakis who have made an obscene fortune from mining spice, a substance with psychoactive qualities that is at the heart of commerce and technology in the known universe. Their enrichment comes at the expense of the indigenous people of Arrakis, the Fremen, who they've spent generations slaughtering. 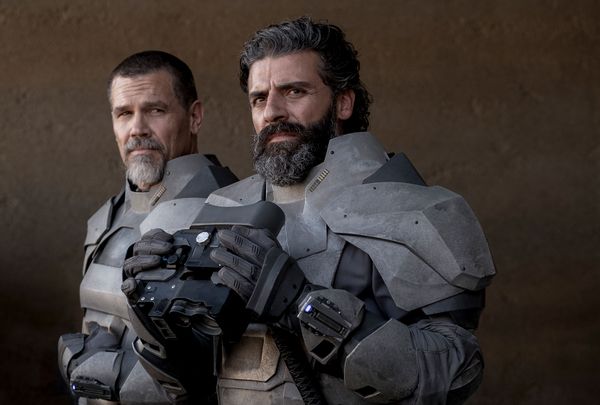 Without warning or explanation, in the year 10191 the Emperor orders Duke Leto Atreides (Oscar Isaac) to take over stewardship of Arrakis from Baron Vladimir Harkonnen (Stellan Skarsgård), decreeing that Harkonnens abandon the planet. Ever the loyal servant, Duke Leto, his son Paul and his concubine Lady Jessica, Paul's mother (Rebecca Ferguson), uproot their household and their house's military strength from their lush, marine home world to the place colloquially known as Dune.

Meanwhile Jessica, a member of a politically influential religious sisterhood known as the Bene Gesserit, receives a message from the imperious and cruel Reverend Mother Gaius Helen Mohiam (Charlotte Rampling) that she and Paul, who has been having prophetic dreams, may have another fate to reckon with.

The noble, charismatic Leto is no simpleton.  He knows the Emperor is jealous of House Atriedes' popularity and deduces his ruler is walking him into a trap. Not content to pick up where the Harkonnens left off, Leto Atreides decides to form an alliance with the Fremen instead of waging war on them.

This is the aspect of Villeneuve's approach that could go some way to transform this story's reputation of being the quintessential sci-fi white savior tale. On the face of it, that's precisely what it is despite Villeneuve's recent insistence during a press event that it is a critique rather than an example. 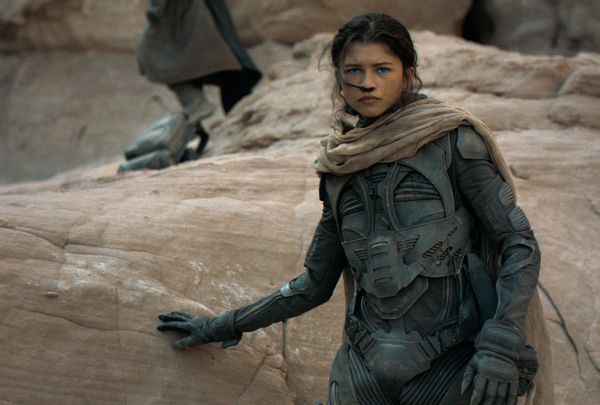 Helping to sell that view is the choice to shift the opening narration from the Emperor's daughter, Princess Irulan, to Chani (Zendaya), a Fremen warrior who recurs in Paul's dreams. The script doesn't place Irulan's dialogue in Chani's mouth, either, charging her to set the terms of this myth from the perspective of her people. She speaks of the spice harvesters ravaging the land, the cruelty that the Harkonnens inflicted on the Fremen. Then she wonders aloud, "Who will our next oppressors be?"

Zendaya and Chalamet's combined magnetism is enough to sell tickets, and along with Ferguson's and Isaac's appeal, their selection to play these roles needs little explaining. This half is mainly Chalamet's showcase, however, and he strikes a credible equilibrium between the guilelessness of a sheltered royal and a eager, curious young man ill-prepared for god-level power and responsibility, let alone leadership of a great house.

As the bloated floating Baron Harkonnen, Skarsgård's presence is shadowed for much of the movie but his menace drips off the screen nevertheless. Dave Bautista's casting as Baron's brutish nephew Glossu Rabban amounts to even more of a preview, which speaks to Villeneuve's implied desire to save the bulk of the desert warfare for a second movie that has yet to be officially greenlit.

Viewed as an origin story, "Dune" delivers on the story elements people may have found lacking in previous versions. Jason Momoa does justice to swordmaster Duncan Idaho, one of the book's most popular characters alongside Gurney Halleck, well-played by Josh Brolin. But as is true of Bautista's casting and the near absence of other major constituencies in this story, Brolin's limited screen time is mostly a tease of what's to come, as is Javier Bardem's, who plays Stilgar.

Without a disciplined script, a gallery of impressive stars can only make a film work to a point. Villeneuve and his writing collaborators Eric Roth and Jon Spaihts demonstrate their awareness of this by emphasizing timeless themes in the story while capitalizing on the cast's ability and the expansive grandeur of each planetary territory to ease exposition into the plot's flow.

Attuning Herbert's fable to forcefully speak to the sentiments of this age, they clearly delineate the divide between the sacred nature of the spice and its industrial value without exoticizing the indigenous characters. If anything it better establishes the arrogance of invading forces and how foolish assumptions of superiority can lead to a land's and a people's undoing.

The script wisely chooses to explain less and show more, relying on the audience's curiosity and imagination as partners to Greig Fraser's wondrous cinematography. Villeneuve's finest work is in scenes that draw us into Paul's hazy dreams, floating on Hans Zimmer's heady score.

An equal portion of the marvel "Dune" inspires must be credited to the props and visual effects teams. Getting the design of sandworms and the life-supporting stillsuits right are a prerequisite to success.

But the less obvious stylistic particulars complete the artistic seduction, like the bonsai in the background in Leto's official chambers on Caladan, or the elegance of the flying transports that resemble dragonflies. Every inch of plot and the screen upon which it unfolds begs to be enjoyed on as large a canvas as possible.

"Dune" is available to HBO Max subscribers for free, but unless you have a superior living room theater set up, you'll be robbing yourself of the absorptive experience a theater offers. Whether you're left astonished or impatient by the ending, knowing this part of the journey is only the beginning is reassuring – and makes us hope we don't have to wait long for the continuation.

"Dune" begins streaming on HBO Max on Thursday, Oct. 21 and will be available for 31 days, and will be in theaters on Oct. 22. Watch a trailer for "Dune" below via YouTube.

More stories related to this title: