Why dramedy "Dad I'm Sorry" speaks to Vietnamese offspring: "They don't dare talk to their parents" 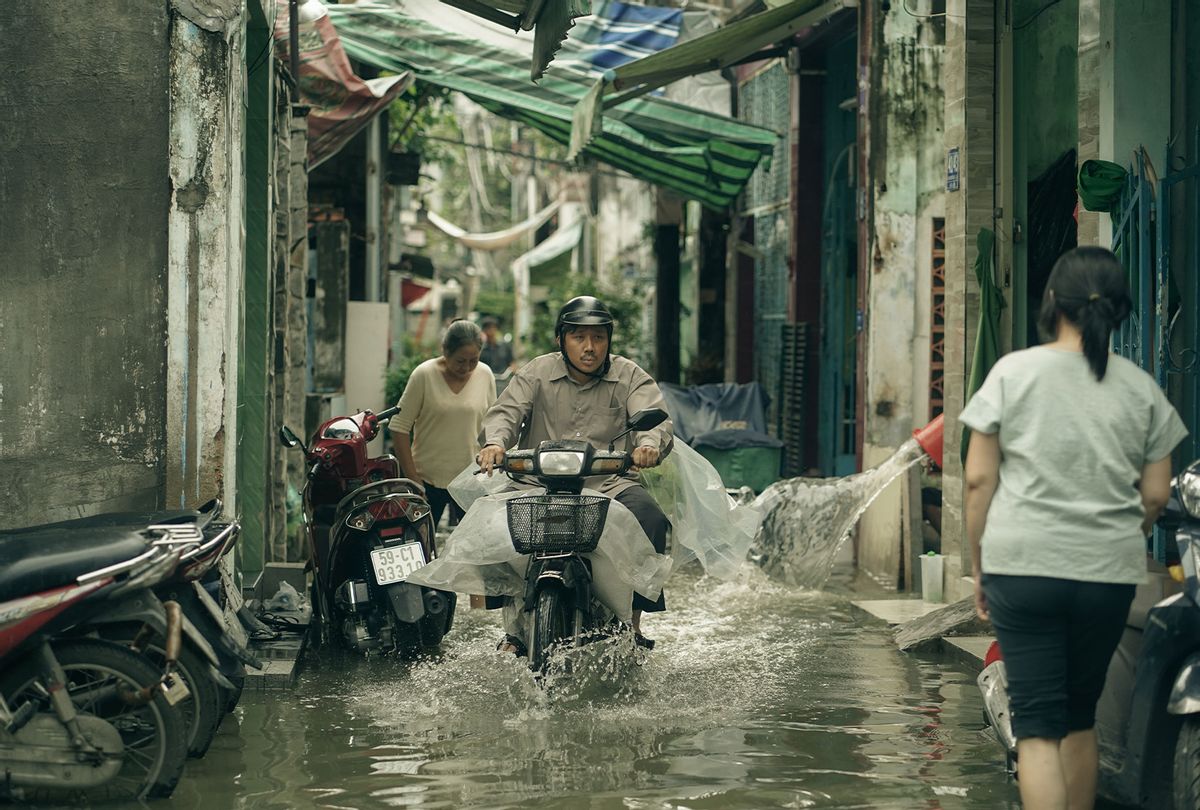 "Dad, I'm Sorry," which screened last weekend at the Viet Film Fest, has been a box office success both in its home country and in the U.S. The film's appeal may be its mix of raucous family comedy and sentimental father/son melodrama. Tran Thanh, who codirected, stars as Ba Sang, who is selfless when it comes to his extended family. However, he comes into constant conflict with his son Woan (Tuan Tran), a materialistic YouTube star. Sang and his numerous relatives, all have money problems, and much of the film's first act chronicles the various reversals of fortune. However, after Woan moves his father and much younger sister, Tot (Ngan Chi) to an apartment, he tells his family what he really thinks of them. It causes Sang heartbreak. When Sang develops a medical condition, it prompts father and son to reevaluate their relationship.

"Dad, I'm Sorry" is a busy but engrossing film as characters fight verbally and physically in almost every scene. Codirectors Thanh and Ngoc Dang Vu keep the film pitched at a high level of energy. The streets are flooded from time to time, there are parties, and everyone gets in everyone else's business. When things get more dramatic, the film slows down to consider the characters' relationships, and it is quite touching.

In his first interview with American media, Thanh spoke to Salon with the assistance of Ysa Le, executive director of the Vietnamese Arts and Letters Association, that produced the fest.

Can you discuss how the film came about? How did you develop the story?

The story is about my childhood. I grew up in a village with small streets. I saw a lot of people who treated their families badly. There are differences between the two generations, which creates problems in the way [children] connect with their parents and how parents communicate with their children. I wanted to make this film so all the Vietnamese people can see it and Americans can learn about Vietnamese culture and see that we have problems with intergenerational communication. I also wanted to make this film for every Asian family; we all have the same story.

READ MORE: The Vietnam War: An interview with Ken Burns and Lynn Novick

Can you give an example of a problem you had with your parents?

Dads don't discuss their feelings. They keep them inside. When they love you, they don't tell you; they do the opposite thing. I can't communicate with my dad. If we have a conversation, after five minutes we start arguing. Does that happen with Western people?

I had a wonderful relationship with my father, and that is why father/son films like "Dad, I'm Sorry," are my Kryptonite. So, I am not the person to ask!

Parents don't teach a child how to say, "I love you," or "Thank you," or "I'm sorry." The children don't know how to react to their parents. Children grow faster than their parents, and do not have the patience to talk to them. The two generations think in different ways. When I want things to go one way, my father wants them to go another. Parents want the best for the children, but what they think is good is often not what the children think or want. So, in my film, the father wants to suffer and bring all the pain and bad things that he can internalize and keep from his son.

There are some very touching themes about sacrifice, especially regarding father/son relationships. Usually, it's the mother who sacrifices in cinema. Can you talk about this idea? Sang is selfless and Woan is selfish.

In my film, the father has to do the mother's functions, and care for his children because his wife left him. There are two kinds of men in real life. The first type is a tough person who doesn't discuss his feelings, the second type suffers everything and keeps things inside. Ba Sang is in between, he's the father and the mother too. He has both characteristics.

This is my story, too. When I was a child, my father worked so hard to send me to the national school to study English. But it was very expensive. He worked hard to earn money to send me to that school. I studied for three years. And I hated my father because he argued and complained about me, and I didn't want to [learn] English. I hated him for that, but when I grew up, I understood him. I saw what he did for me, and how he suffered, how he worked for my education. But he didn't know how to describe it. He forced me to go to that school and didn't tell me why. All Vietnamese families have the same problem. I saw this with my friends, and relatives, and neighbors, all had the same situation. I wanted to give Ba Sang and Woan that situation.

Are you a parent?

I don't have children, but I'm going to! And I don't live with my parents, but they live near me.

Much of the film revolves around money and status. Can you discuss this theme in "Dad, I'm Sorry?"

Young people have crazy thoughts about their dreams. They want to do big things, but the parents only want the safe solution — to have a job, and earn money to feel their own family, and that's it, nothing more. The young people want do things like be famous and take risks to earn big money. Their parents don't want that for their children. That is why they always fight about money, because it can turn you into another person.

In my family too. My mother and her sisters loved each other when they were young, and they all lived together, but when they each got married, they moved out and created their own families. Then the relationship between them became different, because whoever has the money has a higher status than the others. It dictates their relationship as they get older.

"Dad, I'm Sorry," is a very lively, chaotic, funny family film, but then it shifts gears and becomes a melodrama. The comedy is broad, then tears are jerked. Can you talk about the pace and tone?

That's life! We always have happiness and pain mix together every day. I want to make something that has no difference between pain and happiness because they will come together at the same time. I wanted to depict something that is real. Even in the saddest situation, you can have joy inside your heart. But if you are talking and sharing a funny moment, the bad news comes, and you change. That is real. I want to create that tone in that film, so the audience feels the same thing the characters do in the situations. I wanted it to come naturally.

The film has been a box office smash. What observations do you have about why "Dad, I'm Sorry" has been such a success?

I think people love it because they can see their family in this story. Ba Sang is like their father, because most of the men in Vietnam act like this. They suffer, and don't talk about their suffering. Children want to get away from their parents, because they see there is more to life, and think differently from their parents, so they aren't patient with them, or tell them how they think.

In Vietnam, I go to the theater and I see people who cry. They see me, and tell me, "This film is so much like my family." They don't dare talk to their parents, but the main character does; Woan does that for them.

Ysa Le adds: When people in America saw the film — some for the second time — they say how much they relate to the story, "My family is like this!"

The most interesting thing is that you go to the theater, you go with your friends and partners. But this is a film people saw with their parents, and two generations watch the film together. It's strange to sit next to your father to see a film about father and son, and sometimes you can look over and see your father crying, but he tries to hide it. It's funny, but it's lovely. I'm happy I can see that in the theater. Some people over 80 had never been to the theater before, but they heard about this film, and their kids took them. That made me so happy.

How do you think American audiences will respond to your film?

It is my honor to show my film in America because I grew up watching American films. And this is the first time for my films to screen in America. I want people other than just the Vietnamese in America to see it. I want all people nationwide to watch it. Western people love the film. I always want to make something that is real.

In the West, people live independently from parents. It is not the same in Asia, where they live with their parents and often live in the same house. There is a lot of arguing between the two generations. We see each other every day, because we live together, and we do not have enough money to get our own house. How can we be patient and listen to each other, and talk, and communicate? If you see the sadness in the film, you realize you must change your life and thinking before it's too late. You need to sit and talk together. I'm happy that my film can show in America and have some success.

The film promotes respect and kindness, honoring your parents. It's a simple message but it jerks tears. Can you talk about why this theme is so enduring?

We do love our parents, a lot. But there are times when we are so sure about what we have or want that we don't listen to them or acknowledge their feelings. When people get lost, they look back at what they have lost. My message in the film is that we have time, but our parents don't. We always love each other. Parents want to do their best for their children, and children want their parents to enjoy their life, because they spent half their life sacrificing for us. But a lot of Vietnamese parents don't want to do that. They want to live two lives — their life and their children's life. Children want their father and mother to retire and relax and spend money on themselves. Children want their parents to be in love and find another love if they are divorced. But they can't communicate with each other. Even within my family, I want my mom and dad to spend my money and enjoy their life. You earned money for me to grow up, and now I earn money for you to spend. Why do you always have to suffer and sacrifice? Parents don't know how much their children love them. Children don't tell their parents they love them enough, until they get lost. I want the younger generation to watch this film so when the bad things happen to their parents, they can be patient, and let them know how we think, to get them to be positive. Life is short.