GOP gerrymandering will backfire on Republicans 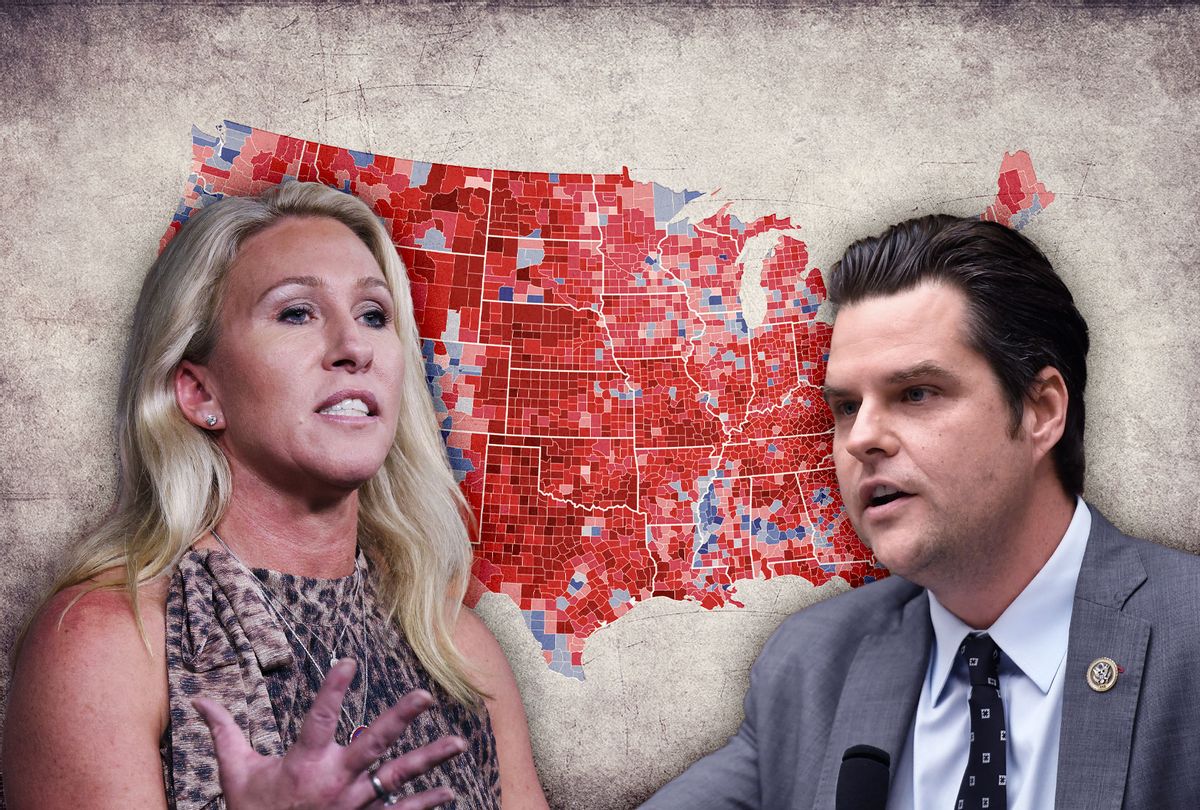 Ron Watkins, the guy most QAnon experts believe is on half of the duo — with his father Jim Watkins — to be the infamous Q of QAnon (He denies it) is now running for Congress.  Watkins has relocated to Arizona from Japan, where he was believed by most QAnon researchers to have written the "Q drops" — along with his father — by pretending to be a high-placed D.C. official in the Donald Trump administration. He's planning to run as a Republican against Democratic incumbent Rep. Tom O'Halleran.

Watkins didn't pick Arizona's 1st district out of any real connection to the area, or even the state. The district has become a hot commodity because, after a robust bout of gerrymandering by the GOP-controlled state legislature, it's believed that that the congressional seat will likely turn over to a Republican. Subsequently, the race is a magnet for a lot of Republicans with congressional dreams and a better base of donors than the denies-he-is-Q guy.

GOP political consultants are quick to downplay the possibility that Watkins could win. Arizona Republican political consultant Stan Barnes told Will Sommer of the Daily Beast that a guy "who's allegedly related to the QAnon phenomenon has no chance of winning." But as Sommer pointed out, "QAnon connections haven't proved disqualifying" for Republicans like Reps. Marjorie Taylor Greene of Georgia and Lauren Boebert of Colorado. Indeed, Donald Trump incited an insurrection on the Capitol that was manned heavily by QAnoners, and he is the current favorite to win the 2024 election. Watkins is squirrelly, will likely be outspent, and his sleazy history includes giving an interview in a brothel — so I wouldn't bet in his favor. Still, he's not crazy to think that he's got a shot.

Across the country, Republicans — who already control the majority of state legislatures — are working swiftly to redraw election maps to marginalize Democratic voters and create as many non-competitive Republican seats as possible. Most of the political coverage of this, for understandable reasons, is focused on how this will further enshrine the Republican power, giving them what could very well be permanent control of the federal government, despite the fact that most voters actually cast their ballots for Democrats.

RELATED: New round of GOP gerrymandering in Southern states could be the most racist yet

But another, less intended consequence of gerrymandering is that it will speed up the Republican race to the bottom.

GOP gerrymandering empowers an ever-larger cast of idiots, conspiracy theorists, con artists, and open white nationalists to win national office. The situation is bad now, with Congress home to characters like Taylor Green, Boebert and Florida's Rep. Matt Gaetz, currently under federal investigation for sex trafficking of minors. But it's about to get much worse. Very soon the clown car will unload its passengers into primary campaigns for all of these newly safe Republican seats created by gerrymandering.

Here's how it happens: In districts with safe seats for one party or another, the election that counts is not the general, but the dominant party's primary election. This lack of general election competition creates all sorts of problems, but it's less of an issue in Democratic districts, where the diversity of the coalition at least creates real ideological debate in primaries. For Republican candidates, however, the incentives are completely skewed.

The kinds of people who vote in Republican primaries are ... well, not America's best. Without having to worry about running candidates who have to compete against Democrats for moderate voters, GOP primary voters can just go with whatever candidate excites them the most. And what speaks to Republican primary voters is sadism, racism, and a deep commitment to wild conspiracy theories. Gerrymandering makes it so that America's worst voters also happen to be the only voters who count at all in an increasing number of districts.

This is how we got Gaetz, who won with nearly 65% of the vote in his staunchly Republican district, Taylor Green, who drew nearly 75% of the vote, and Rep. Paul Gosar, who flaunts his white nationalist yearnings and got nearly 70% of the vote in his deeply conservative Arizona district. Having a heavily Republican district is an open invitation for the worst people to run, secure in the knowledge that as long as they can win over the Newsmax-addled, Facebook-meme-sharing hard right nuts that vote in GOP primaries. After that, it's a red carpet straight to national office.

Gerrymandering is not just a problem on the district level, either.

We can see from statewide offices what happens when Republicans don't feel they need to compete with Democrats in general elections. In both Florida and Texas, the incumbent Republican governors — Ron DeSantis and Greg Abbot, respectively – are running on what can be fairly described as a pro-COVID-19 platform. Both have waged all-out war on any effort to stymie the virus's ability to spread to as many bodies as possible, with a doggedness that is indistinguishable from what they'd do if they were trying to get their own constituents killed.

They aren't doing this to win any popularity contests in their states. On the contrary, polling shows repeatedly that the majority of Americans want leaders to fight the virus, not help it spread. In fact, their actions are causing Abbott and DeSantis to see big dips in their approval numbers. But neither of them cares because both states passed draconian voter suppression laws that shield Republican politicians from having to answer to the majority of their state residents. Having secured what they likely see as an easy GOP win through voter suppression, both Abbott and DeSantis are focused instead on pleasing Republican primary voters. Doing that means maximizing the sadism and the plain old nuttiness. As Adam Serwer wrote in the Atlantic, Abbott is "too afraid of his own base to act responsibly."

Such fear-based governance will only become more and more the norm as Republicans shut Democrats out of the ability to compete in general elections, meaning that Republican primaries loom ever larger as the only elections that count. The only way to win in many Republican primaries is to show you can out-crazy the other candidate.

So it's no wonder the guy who is alleged to be Q is running for office in Arizona. When all the political incentives favor a race to the bottom, the people who are already living in the sewer have a strong advantage.