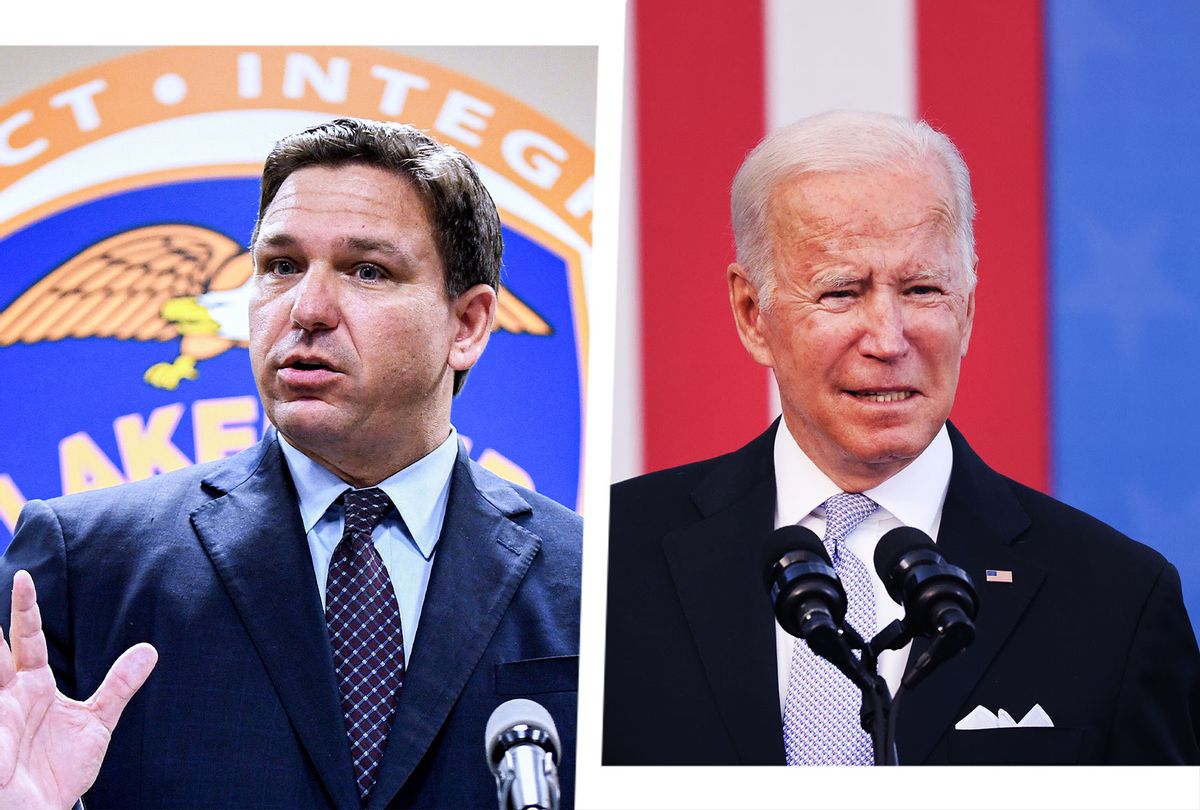 Florida Gov. Ron DeSantis, a Republican who has emerged as one of the most conspicuous anti-science politicians during the COVID-19 pandemic, officially sued President Joe Biden's administration on Thursday in response to its vaccine mandate for federal contractors.

"Because the government's unlawful vaccine requirements seek to interfere with Florida's employment policies and threaten Florida with economic harm and the loss of federal contracts, the State seeks relief from this Court," read the 28-page lawsuit, which was filed in federal court in Tampa. The document singled out Biden's Sept. 9 address announcing vaccine mandates, implying that the administration also believes the government should not mandate vaccines but is ignoring the law because the president's "patience" has been "wearing thin" and he is angry "at those who haven't gotten vaccinated." It also argued that complying with Biden's mandates would cause economic harm to the state.

"Because Florida's employees are generally not required to be vaccinated, the challenged actions threaten Florida with the loss of millions of dollars in future contracting opportunities and put undue pressure on Florida to create new policies and change existing ones, each of which threatens Florida with imminent irreparable harm," the lawsuit contends. It seeks an immediate injunction to the rule, which will otherwise take effect on Dec. 8.

DeSantis himself insisted the mandates were illegal, telling journalists in a statement that "the federal government is exceeding [its] power and it is important for us to take a stand because in Florida we believe these are choices based on individual circumstances."

Salon spoke with a legal scholar who was unimpressed with the legal arguments in the lawsuit.

"I would say this DeSantis lawsuit is between manifestly groundless and utterly frivolous," Harvard law professor Laurence Tribe told Salon by email. "The executive actions DeSantis has sought to depict as lawless are well within the president's statutorily delegated authority."

Although DeSantis has sought and garnered headlines for opposing Biden's policies, banning business from requiring proof of vaccination and prohibiting mask mandates, he is hardly the only Republican governor to politicize COVID-19. From Kay Ivey in Alabama to Greg Abbott in Texas, governors are finding various ways to reverse restrictions and make accusations against the Biden administration. Public health experts expressed concern that these measures were premature as early as spring 2021. Dr. Rochelle Walensky, director of the Centers for Disease Control and Prevention (CDC), told reporters in March that she has a "recurring feeling I have of impending doom. We have so much to look forward to. So much promise and potential of where we are and so much reason for hope. But right now I'm scared."

Her views were echoed by experts who spoke to Salon around that same time. Dr. William Haseltine, a biologist and chair of Access Health International, told Salon in March that at that time "the decision to reduce mask wearing and reopen business anywhere in the US in extremely unwise and in fact dangerous."

The science is unambiguous about the effectiveness of masks and vaccines. Wearing a facemask, like covering your mouth and nose while sneezing, helps limit the spread of infectious respiratory diseases like COVID-19. The COVID-19 vaccines are also both safe and effective, both those that use conventional vaccine platforms (e.g., Johnson & Johnson) and those known as mRNA vaccines, which utilized a revolutionary new technology. Opposition to vaccines, wearing masks and other mundane public health measures has been inextricably linked with right-wing politics, although some individuals also belong to marginalized groups with historically valid reasons to be skeptical of the government and medical institutions. While the race gap in terms of vaccination is closing, the politics gap is not.

"Unfortunately, due to the political dynamics in this country, pushing back against vaccines or vaccine mandates, etc. has become important to a lot of people's sense of themselves," Dr. Saad B. Omer, director of the Yale Institute for Global Health, told Salon earlier this month. "It's become part of their identity."