Farmers try to stop their apples from developing watercore. But a few have realized that consumers will pay extra 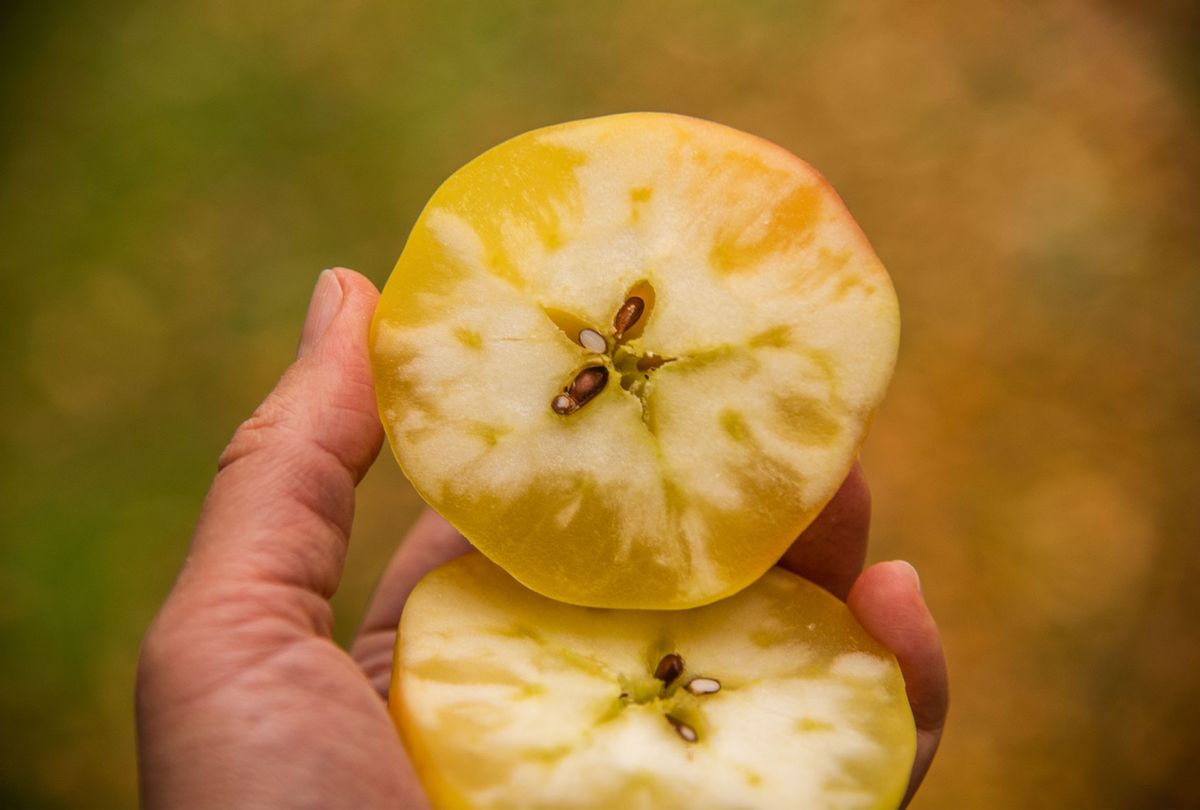 In ancient proverbs and classic folklore, brown apples are a metaphor for misconduct, sin and demise.

Take for example, this old-school idiom: "One bad apple spoils the whole barrel." The phrase likens institutional corruption with a rotten and deceptive version of the fruit — one that looks perfect on the outside but is browning and spoiled inside.

Negative connotations surrounding brown apples have painted these anomalies as undesirable and inedible. But contrary to this stereotype, certain brown apples can actually be a remarkable gustatory experience.

Often, browning, brown-tinged or flesh-tinged apples are the result of a rare physiological disorder known as watercore. And while many farmers work hard to avoid their apples going watercore, a few enterprising ones have found that some consumers actually flock to them for their syrupy, sweet flavor.

The phenomenon of watercore specifically "presents as a translucent appearance at the core and/or flesh of the fruit," according to a 2020 study conducted by scientists from Japan's National Agriculture and Food Research Organization (NARO). Although Fuji apples are the most prevalent cultivar exhibiting watercore, all types of apples are susceptible to this disorder. Watercore is typically found in apples grown in extreme temperatures which in turn accelerates their maturation periods.

Environments with cool temperatures — specifically ranging between a low of 40 degrees to a high of 50 degrees Fahrenheit — are ideal for driving watercore production, explains Dr. James Mattheis, a research leader specializing in tree fruits research at the United States Department of Agriculture (USDA). The cool temperatures, usually seen at night, enhance flesh softening and speed up the apples' ripening process.

"That combination of those types of daytime environments with, then, relatively low nighttime temperatures really is favorable for the development of watercore," Dr. Mattheis reiterates in an interview with Salon.

"Sorbitol goes through the plant, into the fruit and normally, it gets processed inside the cells," says Dr. Mattheis. "What happens when we have watercore is that the process of flooding in the cells doesn't occur like it would normally."

Instead, excess amounts of sorbitol in watercored apples accumulate within the intercellular spaces of their vascular tissue. The resulting fruit flaunts a sweeter taste compared to its non-disordered counterparts. It also changes the way the apple appears when cut into: as visible in the photo above, watercored apples have a slightly odd, brownish and watery pattern inside that is generally symmetrical.

Additional traces of fatty acids — such as ethyl and methyl esters — along with galactaric, erythronic and dehydroascorbic acids also contribute to the apples' sweetness. In Japan, the market for mature watercore apples is especially high, as their flavor is considered desirable. Such apples are often advertised as "aroma-rich and pineapple-like," according to the NARO study. In other Asian countries, watercore apples are frequently bred with popular non-watercored apple varieties to enhance their overall sweetness and flavors.

However, in the United States — where longevity and aesthetics are favored amongst retailers over flavor — the demand for watercore apples still remains low. And in agricultural literature, the condition of watercore is usually described as a problem, not a plus; a 2020 horticulture paper from a Michigan State University researcher calls watercore "a persistent problem" and a "serious… physiological disorder."

"It's a real kind of balance between having the fruit that is, in the opinion of lots of people, just wonderful taste-wise compared to the commercial desire to have a longer storage life," he adds.

But that alone shouldn't discourage anyone who has never experienced the joy of savoring a watercore apple from biting into one right this second. After all, as Dr. Mattheis says, "if you ever tasted a watercore, you would never want to have anything other than that. That's how good they are."

More of our favorite stories on agricultural science: