No one can say if "The Matrix Resurrections" is good or bad. Either way, it makes you think

While the fourth installment of "The Matrix" series isn't a complete success, it is a worthy conversation piece 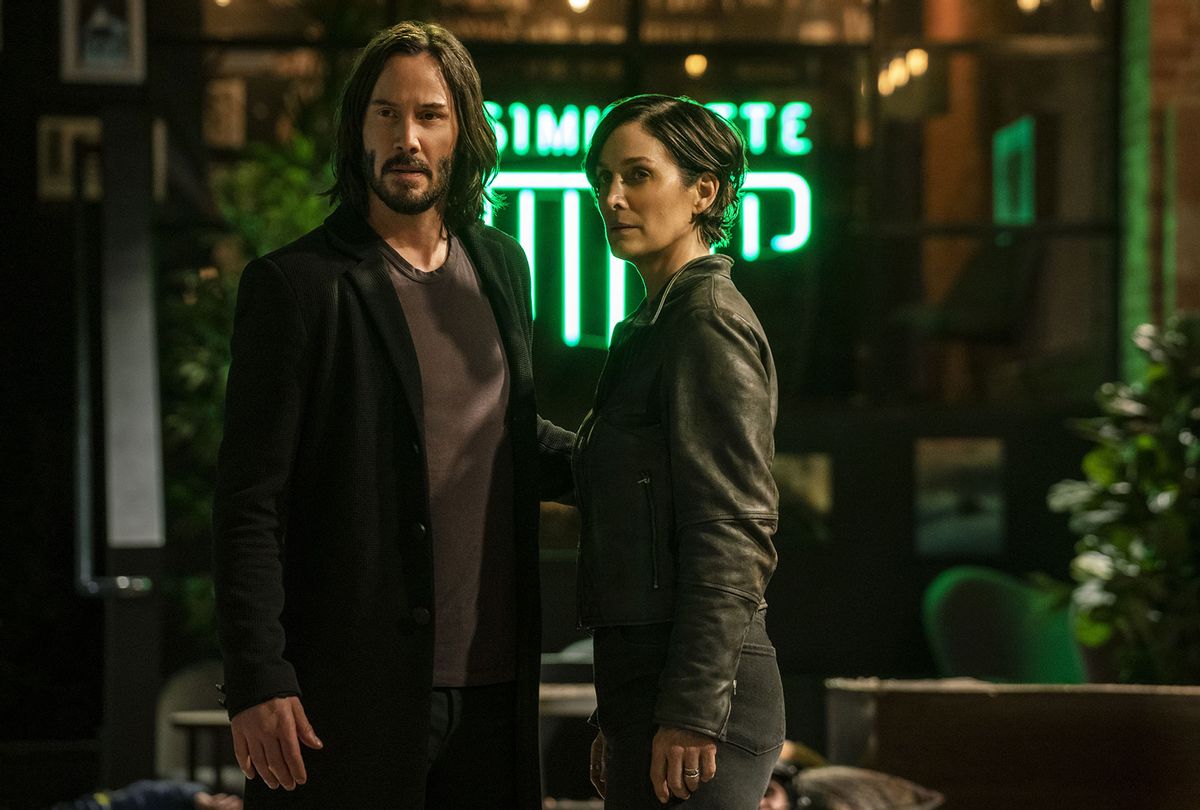 Imagine this reviewer sitting across from you, stretching out her hand to offer the either-or choice that ensnared the imaginations of millions over the past 22 years.

As the scenario applies to "The Matrix Resurrections," the question isn't about a red "truth" pill or a capsule of beautiful blue lies, or whether the movie is good or bad, or whether it demands to be seen or skipped.

The script puts it succinctly: the choice is an illusion. You already know what you're going to do. You may have even committed yourself to a passionate opinion about the film, sight unseen. The "Matrix" franchise has that effect on people.

What can be said is that the film is more successful in some of its aims than others, and feels more essential than 2003's one-two punch of "The Matrix Reloaded" and "The Matrix Revolutions." Eventually, however, it falls prey to the same design flaws that made them lesser works.

The TL;DR version of this review is this: "The Matrix Resurrections" is a better messenger and cultural analyst than a cinematic spectacle — playing with enough lofty concepts to be interesting, while falling short of living up to the hype.

RELATED: Why "The Matrix" is basically a sci-fi "Office Space"

Nevertheless, I appreciate Lana Wachowski's defiance of any inclinations to see "The Matrix's" world, or ours, in binary terms. Existence, in the world of "The Matrix," is rarely defined so simply, which is why my initial distaste for it softened with deeper consideration. It may not deliver the original's thrills, but at the least it'll start some conversations.

It is up to you to decide if that is enough to lure you out to a movie theater in 2021.

When it was released in 1999, "The Matrix" was a stupendous, paradigm-shifting action fable, bringing all the explosiveness and scope of a space opera not merely to Earth, but into our cities and office spaces. It gave us a slick fantasy infused with mysticism, positing that capitalism's toxic corporate system is a massive multiplayer role-playing figment built to enslave us, and that the machinery was built by machines.

Then it brought in the guns — so many guns — wielded by freedom fighters like Trinity (Carrie-Anne Moss) and Morpheus (played in the original trilogy by Laurence Fishburne), for whom the laws of physics no longer entirely applied. Characters preached about freeing the mind, ran up walls, leapt between skyscrapers and pulled off gymnastic feats all while carrying pounds of artillery and wearing heavy leather and latex.

Most importantly, the Wachowskis cast Keanu Reeves as a cubicle-dwelling computer programmer – otherwise known as a nerd – whose journey transforms him into a superhuman. What's not to love?

Strip away the florid tech-speak and the dreamy philosophizing, all the gears and mechanics, and you're left with the simple reminder that this is a perpetual love story — with Neo and Trinity finding and losing each other, time and again.

Since the original film came out, countless newer movies have given us their own versions of moody, destiny-linked romances. Likewise, you've definitely seen other versions of its action sequences. The groundbreaking effects and fight choreography in "The Matrix" created a new entertainment industry standard, pulsing through movies, TV shows and, naturally, video games. Now, even the film technology behind bullet time has become quotidian.

In the second half of "The Matrix Resurrections," these influences become a significance hindrance to its creative momentum. But the movie's giddy metatextual embrace of its legacy has glimmers of greatness.

In the here and now, whenever that is, Neo re-emerges in the limiting everyman identity of Thomas Anderson, a man caught in his own existential wake-work-eat-sleep loop.

Like many of us, Mr. Anderson is over-medicated and insufficiently connected to reality, though substantially better off than most. He's ascended beyond code monkey status to become a programming god at his old company MetaCortex, where he's partnered with a slick suit named Smith (Jonathan Groff, channeling his "Hamilton" ruler-of-all-he-surveys vibe, but with less spit). Still, he's not content, sensing that despite his fame and success, something is off.

And what Thomas Anderson's defining achievement, his "Halo," his "Minecraft"? A game called "The Matrix".

When it comes to durable art, the element that make it universally celebrated also leave it open to endless interpretation. Even though Lana Wachowski and her sister Lilly (who is not involved with this film) designed "The Matrix" as an allegory for embracing one's transgender identity, the filmmakers also knew the dominant cultural mores of 1999 would never allow the story to be overtly about that. The dulling toxicity of tech-enabled corporate hegemony is far more relatable.

But since Neo's awakening to his true self has been claimed by disinformation peddlers and violent misogynists, Lana Wachowski and her co-writers David Mitchell and Aleksandar Hemon are obligated to respond about that. (Lilly already said her piece on Twitter in May 2020, and it gave us life.) That they do, playfully at first before showing their fangs later.

When Neo reconnects with Trinity she's going by Tiffany, a suburban mom saddled with an undermining husband named –  ha! – Chad.

This is the point where I'm obligated to say only as much as you need to know about the story to maintain the surprise of it all. But, seriously. Look at the fact that Neo/Thomas Anderson is back, as if his death didn't end the machine wars in "Revolutions." Or that Morpheus has returned and is now played by Yahya Abdul-Mateen II — but so has Niobe, and she's still being played by Jada Pinkett Smith.

New characters like Jessica Henwick's Bugs freshen up the premise, along with other necessary technological upgrades. Since nobody uses landlines anymore, the rebels have figured out other ways to enter and exit the system, which has evolved to be more efficient about capturing them. Other details intentionally recall the first trilogy, like Priyanka Chopra Jonas' Sati, a role introduced in "Revolutions"; and one of several returning characters, including that portentous black cat that hints at deja vu.

To paraphrase  another property that owes its legacy to this one, the entire purpose of "Resurrections" is to remind the audience to never stop questioning the nature of their reality, including what fictions like this one tell you that it is.

"Resurrections" at its best escalates the urgency of its examinations of corporate control to take on the dangerous commodification of ideas by those in power. And, it critiques the means by which feelings are exploited to destroy the value of facts.

Wachowski and her co-creators acknowledge the role "The Matrix" legend plays in that effort, expressly in an early act sequence splicing scenes from a brainstorming session on Neo's team with frames from his personal life.

As each programmer parrots some Reddit-board interpretation of "The Matrix", Reeves' hero sneeringly bites into a bloody delicious steak of ignorant bliss. Or he glumly takes the medication prescribed to him by his analyst (Neil Patrick Harris); you can probably guess what color those pills are. One dialogue exchange implies the audience is in The Matrix alongside them. All the while they cycle back to the refrain of, "What made 'The Matrix' different? It f***ed with your head."

We get it: The Wachowskis proposed The Matrix. The many-headed monster of capitalism realized its core aspects, and consumers skinned it to represent whatever they needed it to be.

But most filmgoers don't go to the movies to see polemics against disinformation peddlers and neo-fascism. They want to have their mind blown again, and differently, with visuals that step up the original's next-level aesthetics.

That places a gargantuan expectation upon "Resurrections" that it doesn't exceed or adequately meet. In the same way "Reloaded" and Revolutions" are shaped by Agent Smith's greedy credo of more and more, always more, the nitro-boosted battles overwhelm the tail of the story, numbing its mad dash toward a climax that's more satisfying in concept than in its emotional tactility. Once guns are drawn and the fists start flying, this installment falls right back into the franchise's old habit of slipping on its carpet of spent ammo casings.

Overload isn't the only means by which "The Matrix Resurrections" fails to prevent itself from becoming a pop culture ouroboros. Every action sequence hearkens back to a recent movie channeling something from the original trilogy.  When a character marvels, "I've never seeing anything like this before," you should be forgiven for thinking, "Oh, yes I have." Every zombie slaughterfest, every Marvel Cinematic Universe or DC Comics superhero team up, every "John Wick" punch-a-thon has pulled off what "Resurrection" serves up, and with more panache.

That's the challenge of creating a popular mythology, isn't it? Any product emerging after the original is more likely to be the victim of its ubiquity than resetting the bar. Perhaps this chapter is meant to grab the nostalgia we assign to these stories by the shoulders and shake it around, as if to yell, "Wake the hell up."

Then again, since the entire point of the story is that our brains are hooked on what this system has been feeding it for years, disappointment is baked into the game. And what is disappointment, if not a state that shatters the good-bad binary? Like "The Matrix Resurrections," it speaks to that itchy spot out of reach between unqualified success and absolute misfire. Being neither and both makes it worth a good think.

Believe me, or don't. You'll just have to see for yourself.

"The Matrix Resurrections" is now playing in theaters and available stream for a limited time on HBO Max.