The Victorian-era tale gets the grand adaptation it deserves with a hot air balloon ride, trains and so much more 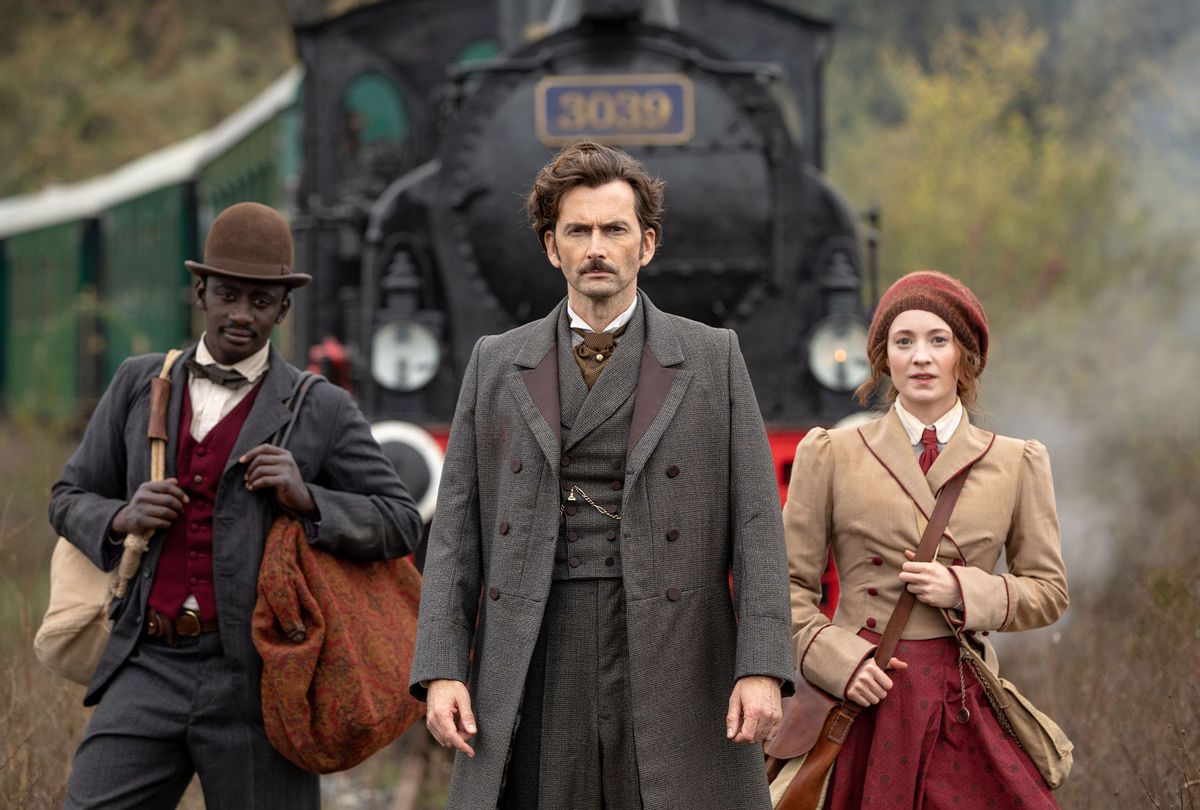 Ibrahim Koa, David Tennant and Leonie Benesch in "Around the World in Eighty Days" (PBS)
--

"Why can't we catch a train like normal people?"

This plea emanates from a hot air balloon as it drifts over Paris in "Around the World in 80 Days," the PBS Masterpiece period adaptation of Jules Verne's famed 1873 novel. But as the audience will soon find, a Victorian-era train ride is not without its dangers either.

By rail or by sea, stagecoach or even camelback, multiple means of transportation are utilized to speed this tale along, even as other challenges beset its compelling travelers. And given its gorgeous photography and a rousing score by Hans Zimmer and Christian Lundberg, this version gives Verne's globe-trotting novel the grandness, the humor and emotional scope it deserves, while tweaking its more problematic aspects. It only took about 150 years.

David Tennant stars as the mustachioed Phileas Fogg, a wealthy Englishman who is convinced of his ability to circumnavigate the globe in 80 days given 1872's latest advances in transportation technology, even wagering 20,000 pounds on his success. Understanding that his creaky butler would not make for the speediest companion, Fogg hires on new manservant Passepartout (Ibrahim Koma). The seemingly foolhardy bet creates a media sensation, and determined journalist Abigail "Fix" Fortescue (Leonie Benesch) tags along in order to chronicle the ambitious trip.

At this point, storytelling license is expected in adapting such a classic work. After all, previous screen versions have alternately imagined Passepartout as Chinese (Jackie Chan in 2004's wretched box-office bomb) or even an anthropomorphic cat (animated in an '80s Spanish-Japanese cartoon). Even the iconic balloon ride that feels canon was never a scene in the original story. Instead, onscreen adaptations have drawn from the author's other adventurous works, inflating an already packed story with more fascinating delights of the era.

Therefore, the addition of a woman breaking up the boys' club of Fogg and Passepartout isn't out of order, and in fact, writers Ashley Pharoah and Caleb Ranson are drawing on two different "Around the World" traditions in creating this character. First, she shares the name Fix with the detective in Verne's novel who is dogging Fogg for most of his journey, mistaking him for a certain gentleman bank robber (which is a device that quickly becomes tiresome). Also, the show's Fix is a nod to the real-life journalist Nellie Bly, who set a record for circumnavigating the globe a la Fogg in 1890.

In any case, the new trio's dynamic works – beginning with Tennant's beleagured version of Fogg, a man of precision and privilege who's also seen as a milksop by his Reform Club peers. It takes a while to warm up to this rather remote enigma, which is not unlike the original incarnation. He's insufferable when he insists on playing the entitled gentleman – like when he's high-handed about Passepartout's valet duties – but becomes more brilliant and human with each challenge overcome. Tennant brings his signature intensity to Fogg, whether he's repressing rage or bursting with bonhomie for a cow in India, and by journey's end he becomes a sort of stand-in for Verne himself – a man who's had earlier disappointments yet comes alive when breaking out of the perceived expectations for him. 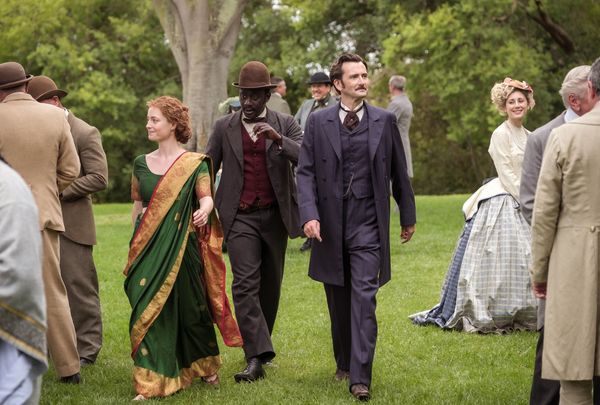 Leonie Benesch, Ibrahim Koma and David Tennant in the Hong Kong leg of "Around the World in 80 Days" (PBS)

Meanwhile, Koma is quite the charmer as Passepartout, a quick-witted polyglot who's traveled extensively. Thankfully he's unlike his novel counterpart; there's nothing servile about his manner for one. That's not to say Passeportout is without humor as Verne clearly couldn't resist punning with that name. But here he's usually in on the joke versus playing the buffoon, and suffers the silliness of his employer with the tolerance of a parent with a bilious child. It's also apparent that Passepartout has far more to his past than a life of service, something that Fix sees through immediately.

"You're very forward for a servant or waiter or whatever you are tonight," she observes with an insight that Fogg lacks.

While Fix is the youngest in the group she provides the steadiest emotional leg to this triangle. Benesch is able to imbue Fix with wisdom and calm fortitude, demonstrating easily why she is able to hold her own while simultaneously reporting on this trip. That she is a Victorian woman and also a reporter provide opportunities for examination of what that means both in that time period and today. When the travelers encounter the notorious libertine Jane Digby (Lindsay Duncan), she challenges Fix to question what she has accepted about men's power over women and the written word. Who knew journalistic ethics and consent would be part of this romp?

Naturally, Passepartout isn't exempt from storylines about his identity either, whether it's as a Frenchman or being Black in the Old West during the Reconstruction era. It's clear that this is written by Brits since Passepartout only experiences racism once he steps upon American soil (although it should be noted that any poor treatment of him earlier is attributed to classism). As production on the show had to shut down temporarily in March 2020 for the early days of COVID, it's possible the series was also informed by the Black Lives Matter protests that came shortly after. Regardless, the series is deft in handling issues of racism in the American leg of the trip dealing with a Black lawman, and wisely eliminates Fogg's run-in with Native people who are portrayed as savages in the book.

Could Fogg have had more meaningful interactions with the people of color? Sure, if the show were longer. As a 19th-century Englishman, Fogg's travels through India and Hong Kong under control of the British Empire is such that in the book he barely interacts with the local people except in an embattled way. The series adds more Asian faces, but the British colonization of both areas is still front and center. As Fogg has a deadline, it's somewhat understandable that he is still portrayed as less involved than a tourist (who nevertheless gets embroiled in several shootouts, an accidental poisoning, a wedding and a jewelry heist).

Instead, the story is firmly focused on the trio and how they grow as their journey strips away their defenses and pretenses – eventually becoming actual friends and acknowledged equals. It's not hard to appreciate how this series also shares DNA with another of Tennant's series, "Doctor Who," which puts a timey-wimey spin on the colorful, family-friendly swashbuckler with conflicts that always comes down to love – love lost, familial bonds, platonic connections and sometimes the romantic. But fear not – there's enough acknowledgement of corruption and malice to add a balancing menace to those sappier aspects.

Director Steve Barron, who helms six of the eight episodes, uses his music video background to great effect in creating a brisk rhythm and visual drama to the series. When the trio land in Paris, a giant "DAY 2" displays on the screen waving blue, white and red like the French flag. It's not just a stylish way to indicate the timeline, but also conveys the theme and tone to the viewer. This early leg of the trip is specifically about the struggle for French liberation.

But the idea of freedom is carried throughout the series. As most of us are staying put to avoid the latest strain of the plague, this version of "Around the World" offers a similar taste of adventure outside our bubble that Verne's serial readers must've craved. Similarly, as Fogg, Passepartout and Fix are the first to take on this particular style of circumnavigation they have liberated themselves from imposed borders and human limitations. They also rid themselves of their personal demons in the process.

By journey's end – which is satisfying even if viewers believe they know what to expect – our affection for the trio has grown. It's no wonder that the studios have already wagered on a second round of more Verne-inspired adventures.

"Around the World in 80 Days" premieres Sunday, Jan. 2 at 8 p.m. on PBS. Watch a trailer for the series below, via YouTube.