Making "Cobra Kai" great again: The series returns with a parable about the peril of bipartisanship

The show remains silly but it tells Americans about who we are, and Robby has become the Steve Bannon of Cobra Kai 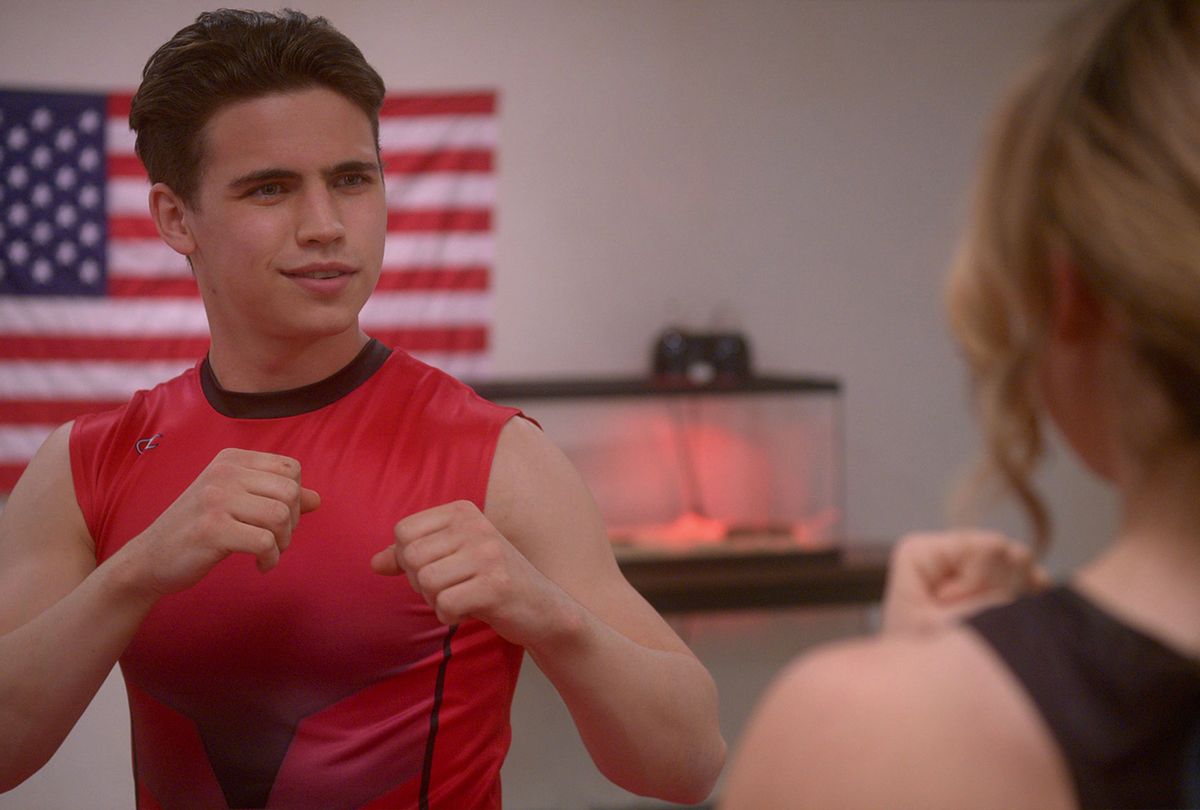 The following discusses key elements from the fourth season of "Cobra Kai." Watch the show first because we will have no mercy about spoilers.

Sometimes we ask too much of the ones we love. We require them to meet our expectations and keep their promises. When they fall short, we explain that we're not angry, just disappointed.

We could be talking about parenting or politicians. Applying these statements to "Cobra Kai" also works, since it's a show about kids and the influential adults they look up to namely Eagle Fang sensei Johnny Lawrence (William Zabka), Miyagi-Do sensei Daniel LaRusso (Ralph Macchio), and Cobra Kai usurper John Kreese (Martin Kove).

That makes "Cobra Kai" a teen soap opera, albeit one where the kids and their elders attain existential clarity after beating one another to a pulp in a variety of settings including and not limited to: Daniel's home; a prom after-party; a hockey game; an Applebees; and the library. It's like  "Degrassi," see, only with hand-to-hand combat.

Daniel and Johnny's fight club adventures also have doubled as a cautionary parable about toxic masculinity, and the deleterious effects of nostalgia addiction, among other things. Laced throughout the rivalry between Miyagi-Do and Cobra Kai are warnings about what can result from tribalism and an extremist devotion to domination.

But if the third season suffered because it seemed pointless, that may be because it was setting up season 4's warning about the perils of trusting in bipartisanship. You know, that vaunted virtue of politicians negotiating compromise in good faith. The current president swears it's possible. Everybody else has had their eyes open for the last two decades.

Bipartisanship only works when each side is willing to show their cards enough to make trades that strengthen everyone's hand. Otherwise, it's just one guy extending a hand to another ready to cut it off.

RELATED: Unless "Cobra Kai" learns new moves, it may be time for Netflix to sweep the leg

The new season of "Cobra Kai" plays this out under the rubric of honor and remaining true to traditions that have succeeded in the good old days, and showing how foolish it is to count on your rival adhering to either when their goal is to destroy you.

Johnny, reintroduced to us as a prime Trump-era hero, pounds out a win in the 2018 Under-18 All-Valley Karate Tournament through Cobra Kai's star pupil and surrogate son Miguel (Xolo Maridueña). Never is Johnny portrayed as a villain, just a misunderstood middle-aged man desperate to reclaim his lost glory.

He and Daniel can be furious with each other and find enough common ground to share a beer, although their occasional steps toward detente are forced by Danny's mentoring of Johnny's estranged son Robby (Tanner Buchanan), who eventually begins dating Daniel's daughter Sam (Mary Mouser).

Then came the Kreese-centered third season, when the show's momentum was nearly choked out by the writers' fealty to the original movies which, in the way of many franchises, diminished in quality with each new outing. Kove makes Kreese an impressive, cigar-chomping villain, but one whose motivation was never adequately established and failed to ground the season in fresh territory.

Instead, series creators' Josh Heald, Jon Hurwitz, and Hayden Schlossberg end with Kreese's determination that all scores would be settled, once again, at yet another All-Valley Karate Tournament. The same place where Daniel defeated Johnny in 1984 and Kreese in 1985 . . . and where Miguel triumphs in 2018.

The danger of history repeating is a central theme of "Cobra Kai," but at the end of a comparatively shallow run this redux was less in keeping with that idea than evincing a creative death spiral.

But that season dropped before the Jan. 6 insurrection, prior to the installation of a new Democratic-majority Congress and a president calling for Democrats and Republicans to work together for the common good despite the GOP's complete lack of interest in doing so.

The fourth season's storylines may have been mapped out well before all of this given that it was picked up before the third debuted. Nevertheless, the parallels between the three-way rivalry of Daniel's Miyagi-Do, Johnny's Eagle Fang and Cobra Kai, led by Kreese and his returning partner Terry Silver (Thomas Ian Griffith) and the messy partisanship threatening democracy, are plain enough to restore the show's metaphorical relevance, whether that is intentional or accidental.

By now, Cobra Kai, Miyagi-Do and Eagle Fang have students who have studied each school's styles. Of course, Cobra Kai as it is now isn't the version Johnny resurrected after Miguel's influence on him transformed "Strike First, Strike Hard, No Mercy" into a positive philosophy based in confidence and assertiveness.

Kreese, on the other hand, is a charismatic despot who teaches strength through violence, an approach embraced by Peyton List's Tory, a young woman ruled by her anger (and one of this season's standouts).

To defeat Kreese, Johnny and Daniel call a truce and combine dojos. But each is still set in his ways. Daniel is an adherent to Mr. Miyagi's teachings and too trusting that those who've learned from him share his sense of honor. Johnny's Way of the Fist aggression chafes against Miyagi's defensive style. Daniel is an '80s soft rock fan, Johnny worships Reagan-era metal. Their longstanding enmity was always going to prevent them from forging a partnership of equals.

Still, it may be strange to think of Johnny as the progressive wing of their shared party, but . . . there he is. He knows how ruthless the enemy can be, which is why his scrappy bunch trains inside a tetanus-trap of a warehouse. That way they can be ready for anything. Daniel trusts in the standard way of doing things, and is so sure that Miyagi-Do has the tournament in the bag that he forbids his students from learning Johnny's "strike first" style.

While this rift splits the good guys' forces, Daniel's former student Robby becomes the Steve Bannon of Cobra Kai, sharing theMiyagi-Do playbook with fellow students so they can defeat them at the competition. Sam knows what Robby is doing, as do Miguel and Hawk (Jacob Bertrand), another reformed Cobra. But Daniel, trusting in Robby's nonexistent honor, is unmoved.

If one were to view this season's All-Valley Karate tournament as an election – which it might as well be, since the agreement stipulates the losers close their dojos and never teach again – then what transpires there and the outcome should be viewed as a lesson and a warning.

Cobra Kai's students may waver at times, but never break ranks with their teachers or each other. Led by Tory and Robby, they fall behind Kreese and Silver and don't push back, even when they're directed to destroy their friends.

And thanks to the ostentatiously wealthy Silver, the dojo has deep pockets. Silver buys the Cobras the flashiest gear and equipment, attracting the best athletes in the area and offering picked-upon kids like Robby's mentee Kenny Payne (Dallas Dupree Young) training to subjugate their tormentors. Beyond a dojo, it's a snake den that makes evil look cool.

At the tournament, Miyagi-Do ekes out a key win only when Daniel and Johnny realize they must team up to defeat Cobra Kai's autocrats, men determined to train children to be monsters. But they arrive at that realization too late to beat an enemy that's been solidly united for weeks.

Make no mistake, "Cobra Kai" remains ridiculous. Never mind the fact that the central conflict concerns a karate studio in a strip mall run by a couple of old guys; this is a show in which adults have serious conversations that include the phrase "karate war."

Even so, Zabka's superb performance is unassailable, and Maridueña and Buchanan have each leveled up as actors. Among the younger cast those two, along with Bertrand, List (whose Tory receives an empathy-expanding backstory this season) and Young coax us to remain invested through its fatuity.

Griffiths' arrival ensures there's plenty of that to go around, although the script eventually justifies Silver's dogged fidelity to Kreese in the many moments where it simply doesn't make sense. Kreese is a cult leader, a dictator. But Silver is a smoother politician capable of saying the right things and persuading anyone that they be winners as long as they do as he does. He's proof that this apparently slight movie expansion understands the stealth with which corruption asserts itself.

Season 4 ends with Daniel renewing his vow to keep fighting, enlisting yet another star character from a past "Karate Kid" sequel to help. Said figure may be one of the last known franchise faces before the writers are forced to put out a call to "The Next Karate Kid," Hilary Swank. If that happens, let it be for deeper reasons than simply keeping the '80s alive.

Seeing "Cobra Kai" regain its form in the fourth round, however, has been a delight. This season reminds us that the show is at its best when it is about more than archive footage and karate kiais. Whenever it tells Americans about who we are and where we currently stand, it vaults from being another teenage entertainment to a fable with punch that lets us know we shouldn't count it out too soon.

All four seasons of "Cobra Kai" are currently streaming on Netflix.