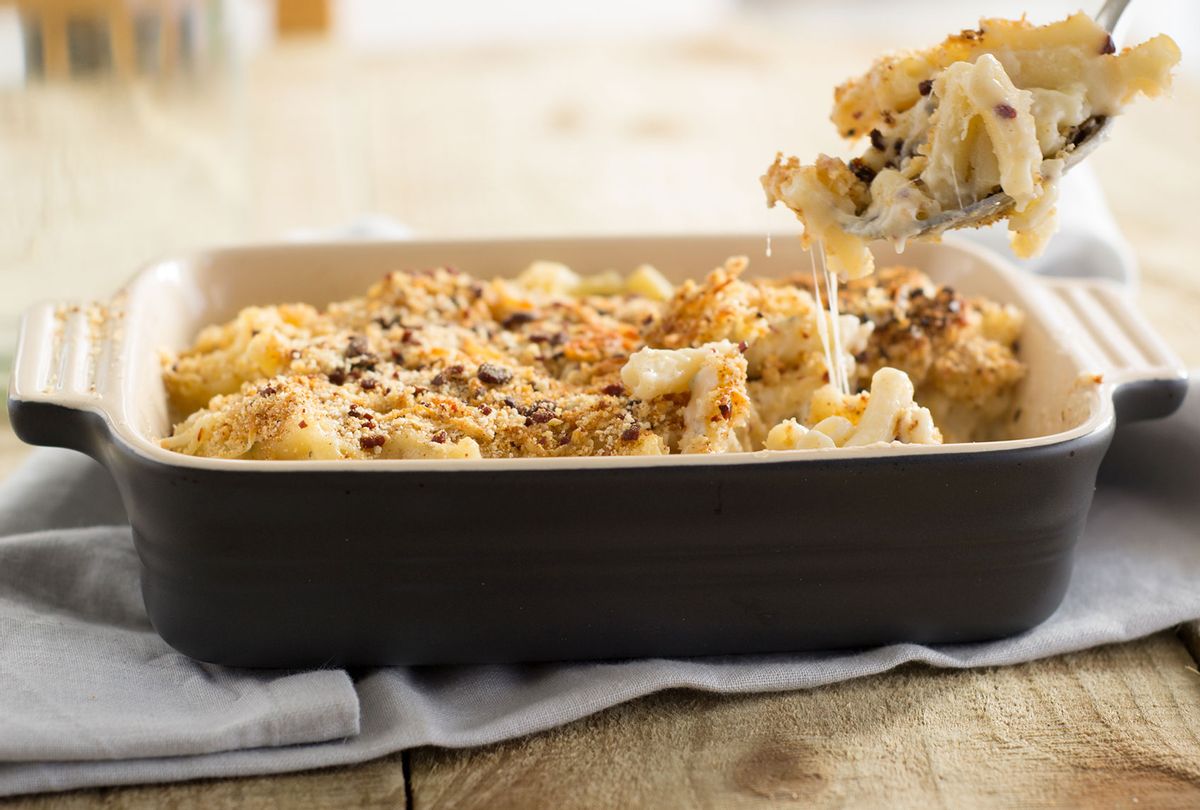 Memories are funny things. There was a neighborhood kid with whom I played when I lived in the Chicago suburbs. I can't remember her name for the life of me, but I do remember her dog's name (he was a chocolate lab named Caesar) and her mom's chicken and noodle casserole.

Looking back, it was likely one of those recipes that came printed on the back of a Campbell's cream-of-whatever can (and thus called for a can or two of soup as a base). From there, it included all the requisite old-school casserole ingredients: pliable egg noodles, a bag of frozen vegetables, shredded cheddar cheese, milk and (in this case) a Ritz cracker topping.

RELATED: Trying to recreate Hamburger Helper was the best thing for my cooking in 2021

To eight-year-old me, it was a kaleidoscopic explosion of comfort — buttery, carb-filled, cheesy and creamy. The beige-on-beige bites were dotted with the occasional errant pea or minced piece of carrot. God bless my own mother, an insanely talented cook who relishes in using fresh ingredients but eventually indulged my request to make something that was almost anathematic to her own style of cooking. It was equally good; while it didn't stay in the weekly rotation, the memory of it lingered.

I'm not sure if it's cooking fatigue or simply the start of a new year, but I've recently been on a bit of a nostalgia trip when it comes to making dinner. I've chronicled my monthslong process to create a copycat Hamburger Helper, and I'm currently fiddling with an orzo and mini-meatball recipe that has shades of Spaghetti-O's.

Earlier this week, as the forecast called for snow and below-freezing windchill, I began to reminisce about that chicken and noodle casserole. I decided to take the elements I loved about it the most and develop a version that was more in line with how I cook at home today. Let's break it down piece by piece:

I'm not at all opposed to cooking from cans, but some creamy soup bases take on a tinny flavor (and, frankly, kind of a gloppy texture) after being canned. You can definitely do better at home. We'll start by sautéing fresh garlic, mushrooms, onion and some spices in a knob or two of butter and then folding that mixture into a luxurious béchamel sauce.

Shred some rotisserie chicken. It's just as convenient as the tinned variety, but it tastes a whole lot fresher.

Alright, I'll admit that I initially got too cute with this step. I created a chicken, mushroom, ricotta and white cheddar filling, which I stuffed into manicotti. I covered them in béchamel, more cheese and a crispy-crumb topping. It was delicious, but — and this is said in my best Carrie Bradshaw voice — I had to wonder when does a casserole stop being a casserole? I didn't come up with a concrete answer, but this definitely felt a little too far afield.

I reigned it in, and after experimenting with radiatori and wagon wheels, I settled on rigatoni. They're readily available and stand up to time in the oven a little bit better than the standard egg noodle.

Go with the classic peas and carrots combo! Though frozen is great here, you can definitely get fresh. (If you go this route, be sure to mince the carrot finely. You can do this using a food processor.)

Again, it was easy to go overboard here. I tried a nutty gruyère and pecorino, but I eventually found my way back to a good old cheddar and a tablespoon of grated parmesan. I'm partial to white cheddar, but yellow is just fine, too.

We're going with a double-whammy of crispiness for the topping by mixing fried shallots and toasted, buttery panko breadcrumbs.

1. In a large pot, melt 1 tablespoon of butter. Add the garlic, mushrooms and onion. Season with salt and pepper and sauté until the mixture begins to brown and become fragrant, about 8 minutes. Remove the mushroom mixture and set aside.

2. Add 2 more tablespoons of butter to the pot, and after it has melted, whisk in the flour. Once the mixture forms a thick, cohesive paste, continue to stir until it takes on a toasty color. While continuing to whisk, add the dried thyme, oregano, heavy cream and chicken stock. The mixture should become thick and velvety.

3. Add the grated parmesan cheese to the sauce and allow it to simmer, stirring occasionally, until it has reduced and thickened slightly, about 5 minutes.

4. Fold in the frozen carrots and peas, rotisserie chicken and mushroom mixture, followed by the pasta. Once it has all combined, add in the cup of white cheddar cheese.

5. Transfer the casserole filling to a prepared baking dish and set aside. Preheat the oven to 350 degrees.

6. While the oven is heating, sauté your panko breadcrumbs in the remaining tablespoon of butter until browned. Season with salt and pepper and toss with the fried shallots. Sprinkle this topping over the casserole.

7. Bake the casserole for 35 minutes. Remove from the oven and allow to stand for 5 minutes before garnishing with chopped fresh parsley.