Biden must make clear what Republicans know: The fight for democracy is a struggle over racism

As Biden honors MLK and campaigns for voting rights, the right doubles down on racist hysterics 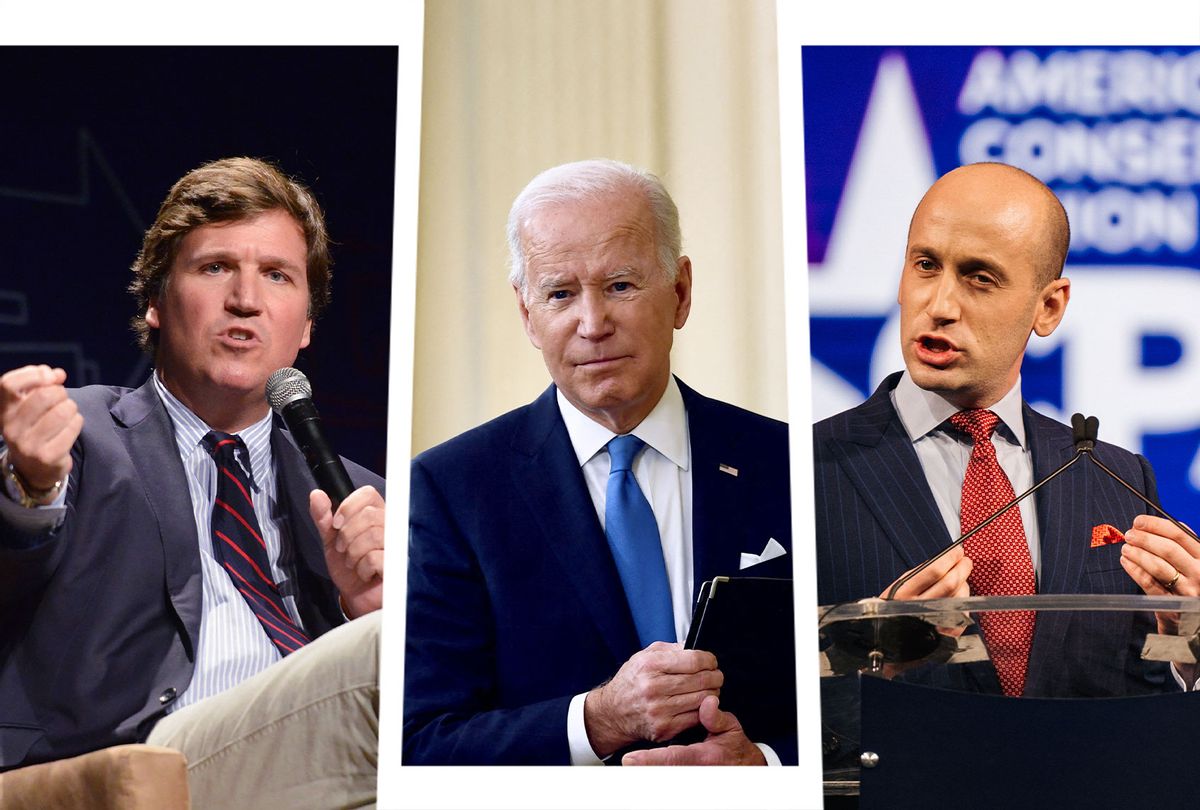 President Joe Biden and congressional Democrats are focusing heavily on the racial justice angle for their refreshed pro-democracy campaign.

They've kicked off the new year with what is likely a doomed bid to convince corruption-poisoned Democratic holdouts Sens. Joe Manchin of West Virginia and Kyrsten Sinema of Arizona to allow a voting rights bill to pass. On Tuesday, Biden made the trip to Atlanta, Georgia, to explicitly tie the current bid to pass voting rights protections to the 20th century struggle for civil rights. The schedule was first to lay a wreath on the grave of Martin Luther King Jr. and then give a speech about the importance of continuing the work by passing voting rights legislation this year.

The racial angle isn't merely a historical matter. The racist impetus the fueled the Jim Crow laws of the past are motivating the current Republican assault on both voting rights and electoral integrity today. And it isn't even particularly subtle. In 2019, the state wrongfully purged about 200,000 voters from the rolls in a move that the ACLU Georgia describes as predominantly affecting "young voters, voters of lower income, and citizens of racial groups that have been denied their sacred right to vote in the past." In 2021, "Gov. Brian Kemp signed into law an omnibus bill that targets Black voters with uncanny accuracy," the Brennan Center explains, with provisions designed to make it harder to vote in predominantly Black neighborhoods. Georgia Republicans have also been using newly written anti-democracy laws to oust Black elections officials and replace them with Donald Trump loyalists.

Coverage of the new Jim Crow reliably sets the talking heads of Fox News and other Republican propagandists into fits of faux outrage, on the grounds that it's unfair to call them "racist" just because they keep wanting to block Black people from participating in democracy. But despite all the whining about the word "racist," Republicans show no interest in actually acting less racist in response to these accusations. On the contrary, they're kicking off 2022 by dropping the masks and the dogwhistles, and getting ever blunter about their white nationalist yearnings.

Last week, Republican state senator Scott Baldwin of Indiana drew outrage when he argued that teachers should be "impartial" on the subject of Nazism. His remarks came during a public hearing on his bill that is clearly meant to suppress any discussion of racism in schools, all under the guise of (you guessed it!) "critical race theory." The bill requires teachers to "remain impartial in teaching curricular materials or conducting educational activities," language clearly meant to make sure teachers don't say things like "slavery was bad" or "the civil rights movement was good."

One history teacher, Matt Bockenfeld, protested that he can't teach about "the rise of fascism and the rise of Nazism" without noting that Nazis were super-duper-bad, what with the massive genocide and attempts at world domination. Baldwin, however, disagreed. "I have no problem with the education system providing instruction on the existence of those isms," he argued, but insisted, "We need to be impartial" on whether or not Nazism was actually bad or good.

The Indianapolis Star later ran a headline claiming Baldwin "walked back" his remarks, but that is not true in any meaningful sense. He insisted that he personally believes "Nazism, Marxism and fascism are a stain on our world history," but did not say that this supposed belief should have any place in schools. As Judd Legum of Popular Info pointed out, nor did Baldwin say "he would make any specific change to his proposed legislation." Also, equating Nazism and Marxism is a rather unsubtle rhetorical trick to minimize Nazism, by equating it with a political philosophy that has inspired quite a bit of good work (like the labor movement), even as dictators like Stalin misappropriated it for self-justification.

But Baldwin's behavior shouldn't be any surprise, as he lives in a right-wing bubble ruled by Fox News, where neo-Nazi rhetoric is now standard issue. As Media Matters documented last month, "While Tucker Carlson has been flirting with white nationalism for years, 2021 was the year he went full-tilt and repeatedly said the quiet part aloud, explicitly referencing the white supremacist "great replacement" conspiracy theory." Other prime time hosts have been joining in.

On Monday night alone, Fox News was in a full boil over conspiracy theories claiming white people are the new American underclass, one supposedly being denied health care so that people of color can hoard it all. Carlson rolled out the conspiracy theory with claims that the CDC "made it official policy to withhold life-saving medical treatment from" white people by supposedly prioritizing young people of color over "older Americans," who Carlson claims were targeted for death by being "too white."

It's basically the neo-Nazi notion that racial diversity is "white genocide," and in line with Carlson's drumbeat of programming mainstreaming neo-Nazi ideas. The irony here is he is using the early days of the COVID-19 vaccine, when essential workers and people over 65 were prioritized, as the basis for his pretzel-like logic of an anti-white government conspiracy. In reality, Carlson is the one preventing old white people from getting vaccinated — by telling them likes like it's useless, it's poison, and Viagra works better. Meanwhile, the government vaccine programs he is complaining about were more effective at getting shots in the arms of white people than people of color throughout much of 2021, leading to months where the former had much higher vaccination rates than the latter, though that racial gap has finally closed.

But facts never get in the way of a white supremacist narrative. Sure enough, former Trump advisor Stephen Miller was on an hour later, on Laura Ingraham's show, claiming Democrats want to "take money and power from one group based on race and give it to another group based on race," with the former being white people and the latter being people of color. To stop this, he argued, white people need to "push back and reclaim our heritage as a nation of legal equality, equal justice." Of course, the actual history of slavery and Jim Crow shows that this "heritage" he speaks of is not one of equality and justice. In typical gaslighting fashion of the right, Miller is using those words to mean their opposite.

The racist subtext of Trump's attempted coup, which led to what must be understood as a white supremacist riot at the Capitol, was generally ignored by the media, even as it was stunningly unsubtle. Trump continued to single out cities like Philadelphia and Detroit, which have sizeable Black populations, for accusations of "voter fraud." While mainstream journalists played dumb and pretended to believe the facile excuse that Trump was talking about literal fraud, his supporters picked up on his implication: voters of color are inherently un-American.

That truth is seen in Democratic rhetoric, which is openly and correctly tying the need for democracy reform to the country's long history of suppressing voters of color. But it's also true in the reactionary rhetoric of the right, where the old and more subtle dogwhistles of racism are giving way to this blunter language. That there's a softening of GOP attitudes towards Nazism shouldn't be any surprise. The Fox News claims that white people are the "real" victims and that Black people are the "real" oppressors are directly descended from the Protocols of the Elders of Zion and other anti-Semitic conspiracy theories that Nazis employed to justify the Holocaust. They're fascists. They don't even try to hide it much any more.

If Democrats fail to pass a democracy reform bill — which Manchin and Sinema seem determined to make sure happens — then there's a very real chance that the fascists will win. Biden's speeches are nice, but they're being met by belligerent and unapologetically white supremacist rhetoric on the right. Words aren't enough to save us — without real legislative action.