5 Popes who formed a holy bond with their animal companions, from cats and dogs to even an elephant

Maybe Pope Francis doesn't see pet parenthood worthy, but many of his predecessors would not agree 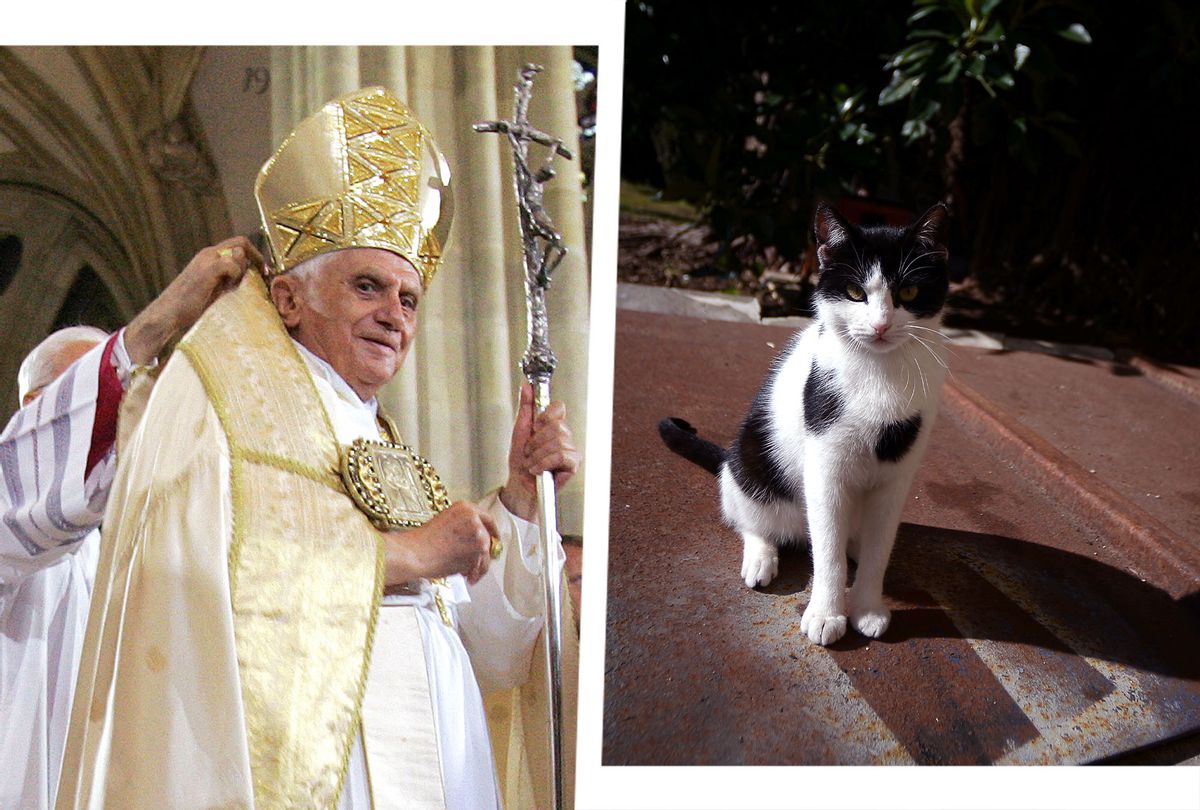 Pope Benedict XVI arrives inside the cathedral on September 12, 2006 in Bavaria | Contessina, one of Pope Benedict XVI's cats at the convent of Mater Ecclesiae inside the Vatican (Photo illustration by Salon/Fabrice Coffrini/Filippo Monteforte/AFP/Getty Images)
--

Pope Francis has really strong opinions about pets and children, of which he has neither. But that didn't stop him from weighing in on their unimportance and the character of their caretakers.

In early January, the supposedly progressive pontiff proclaimed that pet ownership (over parenthood) is selfish and "takes away our humanity," according to the New York Times.

"And in this way civilization becomes aged and without humanity, because it loses the richness of fatherhood and motherhood," he continued. "And our homeland suffers, as it does not have children."

His Holiness doesn't have any pets of his own, staying true to his preachings. But his stance is not one shared by many of his predecessors, ranging from the Renaissance to the modern era, who adopted animals. Even the fictional Pope Pius XIII, played by Jude Law on HBO's "The Young Pope," had a bond with his kangaroo, presented to him by the Australian foreign minister. Whether the animals were exotic gifts or chosen domestic companions, a veritable menagerie has been wholeheartedly embraced by their rightful Holy Fathers over the centuries.

Not only that, but caring for animals is considered a power move where popes are concerned. According to the New York Times, Italian historian and author Agostino Paravicini Bagliani, author of the 1994 novel "Il corpo del papa" ("The Pope's Body"), animals were used "to create and confirm the authority and sovereignty" of the papacy. In short, pets were symbols of great power and dominance.

Let's take a look at some of the most famous pet-loving popes and their companions.

Pope Benedict XVI and his cats

Pope Emeritus Benedict XVI (2005 – 2013), who is widely known for his fondness of cats, is the proud owner of several. There's Chico — a black-and-white domestic short hair — Contessina and the many other stray felines that used to meander around the Pope's former Vatican residence. In 2008, Chico was even featured in the children's "autobiography" titled, "Joseph and Chico: The Life of Pope Benedict XVI as Told by a Cat," which was authorized by Pope Benedict and the Vatican Press.

"Every time he met a cat, he would talk to it, sometimes for a long time . . . The cat would follow him," said Cardinal Tarcisio Bertone in a 2005 Daily Telegraph article. "Once about 10 cats followed him into the Vatican,and one of the Swiss Guards intervened, saying 'Look, your eminence, the cats are invading the Holy See.'"

Pope Pius XII and his goldfinch

Pope Pius XII (1939–1958) and his beloved goldfinch, Gretel, became an inseparable duo after the Pope rescued her from the Vatican Gardens. The miniscule bird, who suffered from a wing injury, joined the Pope for dinners following her recovery and provided him company while he worked late into the evening. She was oftentimes seen resting on the tip of Pope Pius' finger or on his shoulders — her two favorite spots.

The Pope also housed a flock of canary companions, and was known to even treat the insects of the Vatican Gardens with nothing but care and compassion.

Pope Leo XIII and his collection of creatures

During his papacy, Pope Leo XIII (1878 – 1903) kept ostriches, deer, goats and African gazelles in the Vatican Gardens. He allowed the gazelles to roam freely, which was a risky decision considering that one gazelle managed to leap onto the Pope. Even in the face of danger, Pope Leo maintained his cool and joked, "Did you really think that a gazelle could defeat a lion?"

Sadly, the pope's successor, Pope Pius X, did not share his love for animals or the gardens and put an end to the papal menagerie traditions.

Pope Leo's elephant, Hanno, could perform an assortment of tricks and dances on command. Although elephants are an unconventional choice for a pet in today's day and age, Hanno was revered as a spectacle and became a symbol of grandeur. The elephant, who was gifted to Pope Leo X (1513–1521) by King Manuel I of Portugal, was featured in paintings, sculptures, poems, fountains, ceramics and other works of art.

Pope Pius II and his dog

During his stay in Siena, Tuscany, the Renaissance pope (1458 – 1464) wrote about the beautiful countryside landscapes and natural spectacles of his hometown. He also wrote stories about his pooch, Musetta.

More stories about the Catholic Church: