Meat Loaf taught me it's OK to have big dreams 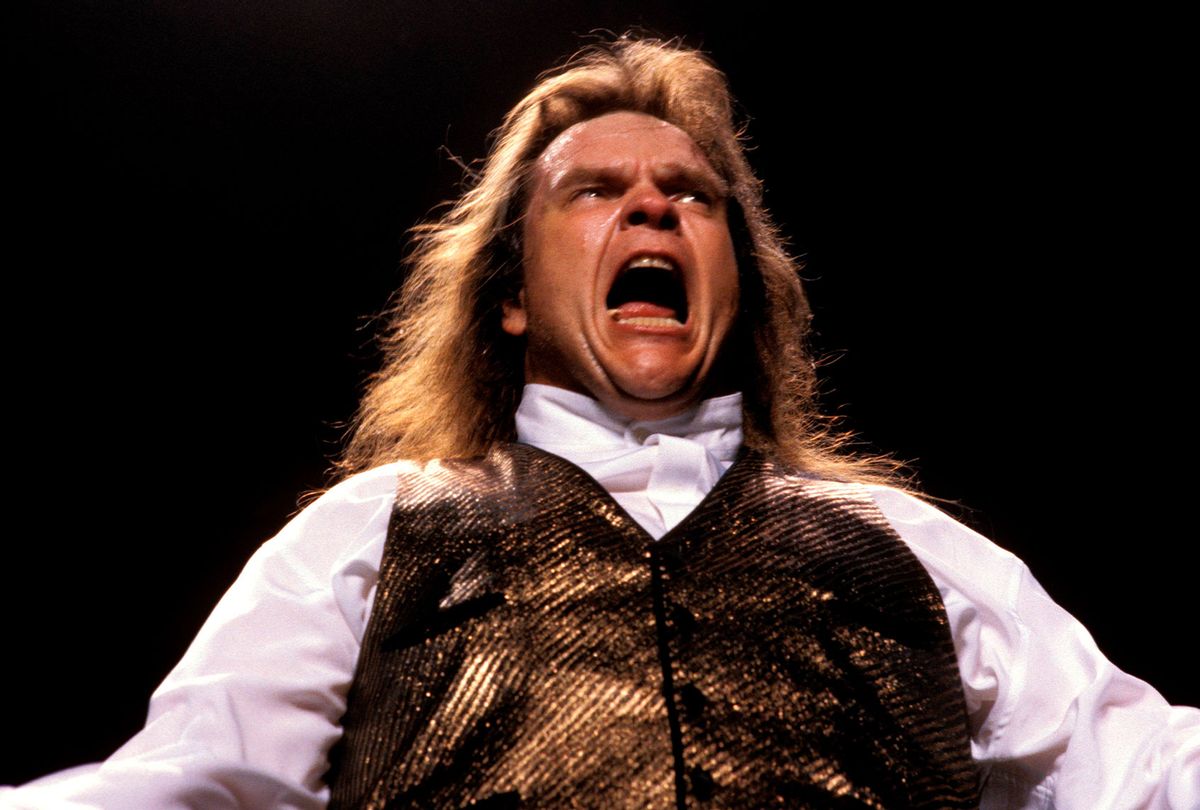 Meat Loaf, the singer and actor, died Thursday at age 74, his manager Michael Greene confirmed, as reported by the New York Times. No cause of death has been officially released, but Meat Loaf was with his friends and family when he died, including his wife of 15 years, Deborah Gillespie, and his two daughters, singer Pearl Aday and actor Amanda Lee Aday. Meat Loaf was previously married to Leslie (Edmonds) Aday.

Meat Loaf had a career that spanned decades and mediums. He trained to be a Broadway singer and met his longtime collaborator and devoted friend, songwriter Jim Steinman, at an audition for the Steinman co-written musical "More Than You Deserve" at the Public Theatre in New York in 1973. Steinman would go on to compose all the songs for Meat Loaf's first album "Bat Out of Hell" in 1977, which the New York Times called "one of the most successful records of all time." The album was born out of a futuristic "Peter Pan" musical that Steinman had written and was trying to stage more widely, with several of the songs from the musical reinterpreted for the album.

The Todd Rundgren-produced "Bat Out of Hell" showcased the musical theatre prowess of Meat Loaf, his dramatic flair. His extraordinary voice soars in songs that became big hits, like the title song, "Paradise by the Dashboard Light" and "Two Out of Three Ain't Bad."

But Meat Loaf, Steinman and the band initially struggled to get a record company to sign them. The musician who would go on to sell 100 million albums worldwide was rejected for two and a half years straight, and even Epic Records, the parent company of Cleveland International Records, which eventually released "Bat Out of Hell," wasn't thrilled with it. Underpromoted, the album found its audience first in the UK and in Canada, where in 1978, Meat Loaf brought the house down at El Mocambo in Toronto. The same year, he performed for America on "Saturday Night Live," where host Christopher Lee jokingly introduced him as "Loaf."

With power rock chords, crescendoing piano, and operatic heights, "Bat Out of Hell" wasn't like anything anyone had heard before. It still isn't. It was like Meat Loaf had flung, fully formed, from hell himself. The album art, conceptualized by Steinman, added to the mythology with its image of a shirtless, long-haired motorcyclist blasting out of a grave, orange fire and a winged demon in the background.

But after "Bat Out of Hell," which has sold over 40 million copies worldwide, Meat Loaf struggled. He lost his voice, perhaps unsurprising given the rugged everything he devoted to his live performances (he broke his leg during a concert in 1978). He struggled with addiction and depression, the quick and fickle rise to fame, and was entangled in lawsuits, including being sued by Steinman (and vice versa). In the 1980s, Meat Loaf filed for bankruptcy.

In 1993, he was back and — surprisingly, given their public fights — back with Steinman for the album "Bat Out of Hell II: Back into Hell." His sixth studio album reached No. 1 in multiple countries. It reached me in Ohio.

My first introduction to Meat Loaf was "Bat Out of Hell II," which I bought in cassette form. I'm certain I bought it at the mall, where I spent hours with my friend, waiting for her older brother, who had a license, to pick us up.

So much of my childhood was waiting, longing for more and other. We would leave this town, my friends and I swore. Leave the cornfields stretching on endlessly in the distance. Leave far behind the high school where on the last day, a classmate drove his John Deere tractor; where, when we performed show choir songs for other schools, the audiences would moo at us.

Meat Loaf struck a nerve with me — with millions of others, it turned out — because here was teenage angst given serious attention and empathy, given powerful anthems, given belief. He was bombastic, but achingly sincere. The joke about his 1994 Grammy Award-winning hit "I Would Do Anything For Love (But I Won't Do That)," penned by Steinman and featuring Lorraine Crosby, was . . . well, what's that?  What won't he do?

That's a joke from people who weren't paying attention. He won't cheat. That's what the narrator of the song — a Phantom of the Opera-type character, on the run from the law, in the popular music video — won't do to the person he loves. He's going to get her "right out of this Godforsaken town" but he'll be faithful. He won't be "screwing around."

Meat Loaf was an unlikely sex symbol. His stage name was a childhood nickname (maybe; like multiple details of his life, he spun myths about it). He was born Marvin Lee Aday in Dallas in 1947, and later legally changed his first name to Michael. Critics mocked his weight throughout his career. As Steinman said, "He looks like every kid who thinks he's a misfit."

Meat Loaf looked different from me, but my physical disability kept me firmly in the outcasts corner too. And here was a large man confident enough, when asked by a duet partner if he will love her forever, to sing "let me sleep on it." He somehow managed, despite songs like "Two Out of Three Ain't Bad," when he sings about sleeping with someone but not loving them, to seem nontoxic, supportive and faithful with the earnest heart of a child.

His stage persona was shameless, prone to drama, big promises and bigger dreams. Passionate, intense, with a vocal range worthy of opera, he wore ruffled poet blouses, tuxedo pants he sometimes split on stage. He kept his hair long. Off stage, he proposed to his first wife Leslie by giving her a salmon. He adopted her daughter. Despite never registering for either major political party, he supported Mitt Romney's 2012 failed presidential run and sang at an Ohio rally for him in a performance many called "bizarre."

And then there was Steinman, the beating heart behind his songs. Steinman wrote all of Meat Loaf's hits, and the two had a lifelong, contentious friendship, as intense and sprawling as any of the pair's ballads. Steinman, who died last year at age 73, was the definition of an artist, but as the Washington Post wrote, "It was Meat Loaf who was the vehicle for the music, delivering energetic, emotionally earnest performances with an almost heroic sincerity." Meat Loaf was more than a muse, but the art made flesh.

In an emotional interview Meat Loaf gave to Rolling Stone after Steinman's death (where Meat Loaf also contradicts the stories of the pair suing each other, saying simply it was their managers suing), he said, "I became the song and he saw the ability for me to become the song." Sometimes, artistic pairings work, work with the devotion of a marriage forged in hell and tested by fire. "We belonged heart and soul to each other," Meat Loaf said.

Meat Loaf was the son of a former police officer and an English teacher, and grew up in Texas. He spent a good deal of his childhood with his grandmother, possibly due, as he theorized in his 1999 memoir "To Hell and Back," to the drinking of his father. He released 12 studio albums; 2016's "Braver Than We Are" was the last. At the time of his death, he had been in the studio recording seven new songs.

As an actor, Meat Loaf's big break came with the 1975 cult classic "The Rocky Horror Picture Show" where he appeared as bad boy delivery boy Eddy, roaring onscreen in a motorcycle, like an alternate version of his first album cover. Modern audiences may recognize him best from his sensitive turn as Robert Paulson in "Fight Club" (1999). He also appeared in movies like "Wayne's World" (1992) and in TV shows like "The Outer Limits" (2000).

In recent years, Meat Loaf had dealt with health problems. In 2013, he was diagnosed with Wolff-Parkinson-White syndrome; he had collapsed while performing several times in the 2000s. He also had asthma, and had undergone back surgeries which made it difficult for him to move and, he feared in 2018, sing.

In the Rolling Stone interview after Steinman's 2021 death, Meat Loaf related how Steinman's nurse had reached out to him: "She left me a message saying how much [Steinman] loved me. She said I was the one person he needed more than anyone else in his life. I don't want to die, but I may die this year because of Jim. I'm always with him and he's right here with me now."

When I'm drunk on one and a half beers on Friday nights in this unending pandemic, it's Steinman and Meat Loaf's songs I sing alone in the kitchen. Meat Loaf's operatic voice was the one that first allowed me to dream of other places, another life I might make for myself with the kind of love that lasts beyond death, the kind of dreams that are rock and roll dreams, and as such, they live forever.

In a statement posted on Facebook, Meat Loaf's family wrote: "From his heart to your souls . . . don't ever stop rocking." And as the title screen of the "I Would Do Anything for Love (But I Won't Do That)" video says, for the unabashed king of earnestness: "Sometimes going all the way is just a start . . ."