Biden can't save us from Trump's Big Lie: Why the fight for democracy has to be a grassroots effort 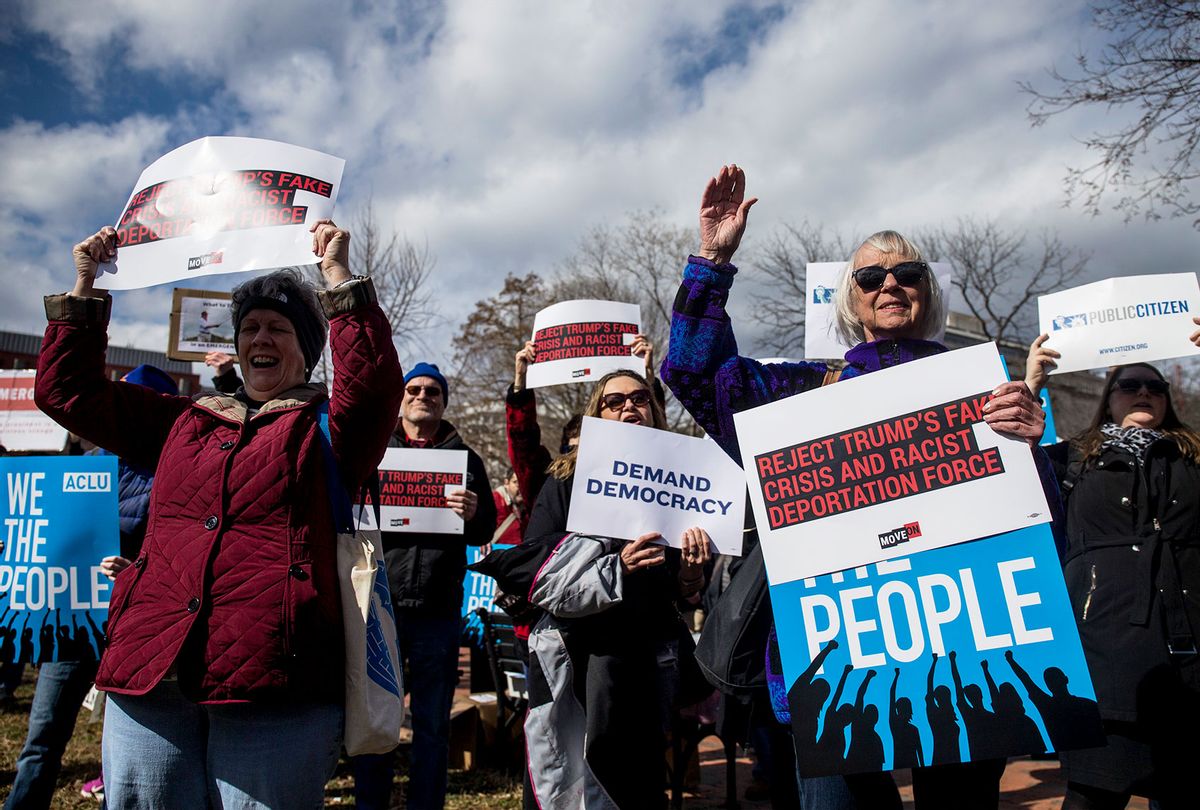 On Friday, the Republican party completed its journey from a normal conservative party into an outright fascist organization intent on overthrowing democracy. In censuring Republicans Rep. Adam Kinzinger and Rep. Liz Cheney for participating in the January 6 investigation, the Republican National Committee declared that the Capitol insurrection — which led to the deaths of four rioters and five police officers, as well as injuries to another 140 officers — is "legitimate political discourse." This affirms what close observers have been pointing out for a year now: Republican officials across the country are using Donald Trump's Big Lie as an excuse to rig the 2024 election, by rewriting laws to make it easier to throw out election results they don't like and running Big Lie proponents who are campaigning on unsubtle promises to steal the next election for Trump.

Democrats currently control Congress and the White House, but so far their efforts to stop the slow-moving coup have amounted to very little. To be certain, both President Joe Biden and the vast majority of congressional Democrats support legislation meant to block these Republican attacks on democracy, but their efforts to pass such bills through the narrow majority in the Senate have been blocked by two centrist Democrats, Joe Manchin of West Virginia and Arizona's Kyrsten Sinema. Without a bigger majority in the Senate, Biden and other federal Democratic leaders have little power to stop the GOP's coup train.

RELATED: At last the Republican Party comes clean: It stands for terrorism and Trump, against democracy

The situation is bleak, but it is not over. There are still people out there who have the power to save democracy. They may be mocked as "wine moms" and ignored by media outlets more interested in chatting in diners wtih Trump supporters, but these people are the last real hope that democracy can be pulled back from the brink.

Yes, I'm talking about the #Resistance: Ordinary Americans shocked out of political complacency by Trump's election in 2016 who then became heavily involved in politics. The people who showed up for the Women's March even if they'd never been to a protest before. The people who organized, donated and knocked on doors, first electing a Democratic majority to Congress and then turning out a record 81 million votes for Biden in 2020. Those folks, more than anyone, have the ability to block Republican efforts to steal the election from the ground up. Despite the demoralizing year we've had, a lot of them are still up for the fight.

"We have 50 state elections [coming up] and then 3,000 county elections, and thousands more town and city elections," Amanda Litman of Run For Something told Salon. "And especially when you're thinking about democracy reform or democracy protection, that's where the f**kery is going to come from."

As Litman explained, the next coup will likely not look like the violence we saw on January 6, 2021. It will come in the form of "a county clerk in Michigan who refuses to certify the election" or other such local official action. Trump and his allies are also pressuring Republicans who control state legislatures to reject Biden wins and send their own slate of electors for Trump. But, as Litman said, if Democrats can "reorient ourselves away from the idea that the only places and races that matter are in presidential battlegrounds" and fight for those seats, they can put a stop to these efforts.

That's where the Resistance comes in. The grassroots are better situated than anyone else to put up a real fight to control local and state offices in order to keep Republicans from throwing the election to Trump. And over the past five years, they've learned a lot about how to do it.

During the Trump years, many folks "got out of their comfort zones" and learned to do things that they'd never done before, Alsúin Creighton-Preis of Henrico County, Virginia, told Salon. They knocked on doors, learned how to talk to and register voters. They threw postcard-writing parties to encourage voters in other states and towns.

Creighton-Preis first spoke to Salon in 2017, when she was a newly naturalized citizen motivated by Trump's election to get more deeply involved in politics. She and other activists helped oust Trumpy Rep. Dave Brat from office and elect Rep. Abigail Spanberger, helping give Democrats the House majority. Since then, Creighton-Preis been elected to the chair of the Henrico Democrats.

"There are so many people for whom Trump was a wake-up call, and they're not going back to this kind of apathetic, apolitical existence," said Julia Gayduk-Healey, a teacher who helped form Rockland United and elect progressive New York Democrat Rep. Mondaire Jones to Congress in 2020.

As Gayduk-Healey pointed out, the activists energized by Trump's election in New York were instrumental in replacing the Independent Democratic Conference — a group of conservative Democrats who aligned with Republicans to block progressive legislation in the state legislature — with progressive representatives. If Democrats retain the House majority in the 2022 midterms, it will be due to this work, because it set the New York legislature up to draw election maps friendly to Democrats. That, in turn, will shut down a major avenue Trump is eyeballing to steal the 2024 election.

Both Creighton-Preis and Gayduk-Healey agreed that there's been a loss of energy and excitement on the Democratic side since Biden's election — far too many voters have been lulled into complacency. But, they argue, the people who got deeply involved in organizing after Trump's election are still in it, and still fighting.

The problem, Creighton-Preis argued, is that Democratic leadership is failing to "tap into this massive resource" of grassroots activists who learned so much about organizing in the Trump years. She partially blamed Terry McAuliffe's loss to Glenn Youngkin in the 2021 gubernatorial election in Virginia on this oversight. She hopes the party learns that the reversion to top-down politics after Biden's win was a mistake, and that it must do more to tap into the massive grassroots infrastructure that grew up during the Trump years.

Litman said one good sign the grassroots are still growing is that her organization, which helps interested Democrats run for office, has "seen a surge of people stepping up to run for office in a way that I don't think we could have expected." Despite all the reports of Democratic complacency, her organization had its best year yet in candidate recruitment in 2021 and, in January 2022 alone, "quite nearly doubled our best recruitment month of last year."

RELATED: A day to celebrate our power: The Women's March provides the first moments of solidarity and happiness since Trump's election

Litman attributes the surge to "winning Georgia and seeing what was possible and then the insurrection, seeing what we were up against" in 2021, as well as the realization among ordinary voters that "the federal government is not going to solve our problem and we have to look locally" to fix things.

These grassroots efforts are the best and last remaining hope for democracy. It matters on the extremely local level, with county clerks and other offices that oversee elections. It matters when it comes to state legislative offices. But it also matters for statewide races. A number of swing states Biden won in 2020 — Wisconsin, Pennsylvania, Michigan — have gubernatorial elections in 2022. If Democrats win it will be much harder, if not impossible, for Republican-controlled state legislatures to invalidate a Biden win in 2024. In addition, there are a number of Republican-held Senate seats that could be flipped blue in 2022. Pennsylvania, Wisconsin and North Carolina are the biggest contenders. If that happens, Democrats in the Senate would have enough of a majority to pass democracy reform legislation without Manchin and Sinema.

Creighton-Preis wants the party to understand that the only reason Democrats gained power in the last four years was through the grassroots effort. "Pay attention to them, respect them," she said. Ignore them "at your peril."

They are the only thing that will stop Trump and his coup efforts, especially as voting rights bills are stalled in the Senate and the Department of Justice seems uninterested in arresting Trump for one of his many crimes. It's frustrating and unfair that saving American democracy falls on the shoulders of ordinary people, who have lives and jobs and very little time for this crap, but it is what it is. We need the Resistance to step up in 2022, even more than when Trump was president.