Why can't Hollywood sci-fi and fantasy imagine alternatives to capitalism or feudalism? 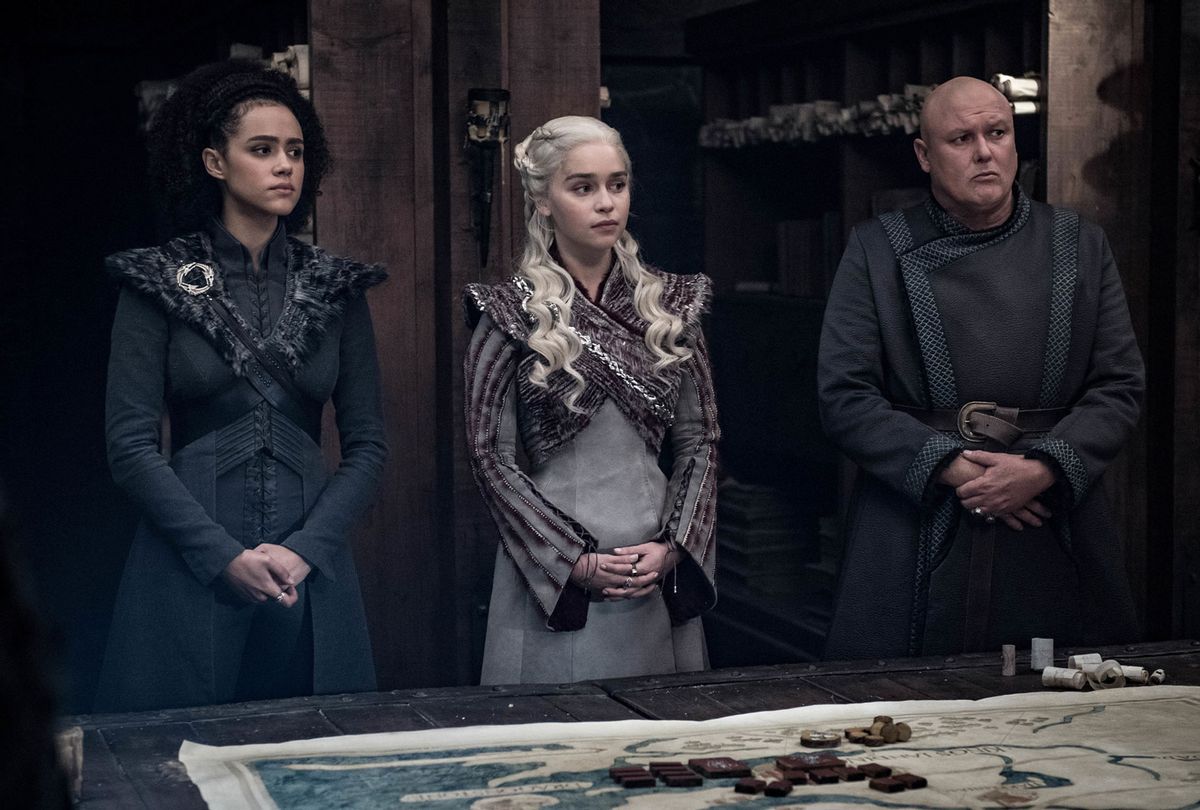 Whether it's through fire-breathing dragons, time travel, psychic powers, or spaceships that sail effortlessly between distant stars, there's never been a shortage of tropes in fantasy or science fiction stories that challenge our belief of what's possible. Yet while these genres are great at imagining new forms of magic and technology, the most popular sci-fi and fantasy works tend to be politically unimaginative. Indeed, a survey of best-sellers and Hollywood-produced works in the genre reveals a tendency to fall back on the same old political or economic systems: for fantasy, we have our usual monarchies and empires, kings and queens, nobles and commoners. For sci-fi, the future is often bleak, dominated by hyper-capitalist corporate galactic warfare or techno-bureaucratic empires clinging to power on their newly-annexed planets.

As a fantasy author myself, I'm intrigued as to how writers' imagination hit a wall when imagining political alternatives. I am reminded of the oft-quoted remark from literary theorist Frederic Jameson, who quipped that it is easier to imagine the end of the world than it is to imagine the end of capitalism. Accordingly, the authors who are adept at imagining the end of capitalism are, more often than not, at the fringes.

In my first novel, an epic fantasy story entitled "The Spirit of a Rising Sun," I tried to challenge this myopia around political and economic systems in fantasy; in doing so, I spent a lot of time pondering the politics and economics that feature so heavily in some of our most cherished stories, and trying to understand why it's so hard for writers to think outside the political box.

Certainly, there are key works in science fiction that push us to consider non-capitalist futures. Ursula K. LeGuin's 1974 book, "The Dispossessed: An Ambiguous Utopia," is exemplary in this regard. In the book, we travel alongside our hero and physicist Shevek, who hails from a planet governed by anarcho-syndicalist principles: political and economic equality, working-class self-management, equality between genders, and a voluntarist orientation toward social life. Although his is a planet of relative material poverty, we nonetheless see how these principles inform his own worldview, including his disdain for inequality in all its guises. Shevek travels to rival system Urras, where inhabitants practice a form of state capitalism that is rife with the usual inequities.

Class conflict, income inequality, and the recurring question of how society ought to be organized are at the heart of not only "The Dispossessed," but much of LeGuin's corpus.

LeGuin's work is far from the only example: one might include (most of) Star Trek or the speculative works of Kim Stanley Robinson or China Miéville. Other more recent works abound.

Unfortunately, this tradition is neglected in much of our most recent and beloved popular films and TV shows, which fail to fulfill the promise set out by fantasy and science fiction to imagine different worlds.

More recently, the popular sci-fi novel series turned Amazon show "The Expanse" pushes the politics of sci-fi in critical directions. In the not so distant future, the solar system is divided into three opposed camps: Earth, Mars, and the Belters. The Belters are those who are confined to mining asteroids in the Asteroid Belt for precious resources that support the populations of Earth and Mars. While the Belters in recent seasons pursue their own freedom through extraordinarily violent means aimed at destroying countless civilian lives on Earth, their inclusion in the story nevertheless points towards the willingness in science fiction to explicitly represent the working classes. It's an interesting contrast to, say, "Star Wars," where the question of what is produced, by whom, and how it is distributed is not discussed at all. Where did Luke and Leia get their food from? Whose labor-time was expended while mining the minerals for not one but two Death Stars? How did the Rebel Alliance obtain the energy to power their X-wings? Though such questions are often addressed in the deeper roots of lore, I typically find myself asking these sorts of questions at the outset.

RELATED: On its final run, "The Expanse" serves a last supper for we who continue fighting for our humanity

While the futuristic orientation of science fiction lends the genre an easy ability to reimagine the politics and economics of tomorrow, major works in recent popular fantasy shows rarely seem to challenge the social systems of the path. "Game of Thrones," for example, only ever flirts with alternative forms of political organization — notably, with the Brotherhood without Banners, whom we see only in glimpses.

The Brotherhood was essentially a guerrilla group that opposed kings on all sides of the ongoing conflict, claiming to fight instead for the common people. Elsewhere, a poor religious leader called the High Sparrow challenges Olenna Tyrell, the matriarch of the rich and powerful House Tyrell that rules over Highgarden, by insisting the law applies equally to both low and high-born alike. He then pointedly asks her if she has ever performed manual labor before, before then posing to her the question of what should happen if the many cease to fear the few. This was a rare moment for "Game of Thrones," in that this bit of dialogue hinted at deeply-buried class divisions between manual laborers and aristocrats in the GoT universe.

Likewise, in one humorous scene of "Game of Thrones," the poor wildling woman Osha, whose home was with the Free Folk, or who recognize none of the kings or kingdoms of Westeros, challenges and annoys the noble-born Theon Greyjoy when he demands she address him with honorifics. Her brief moment of questioning threatens the ideological foundations of the entire feudal order, something the show did not take up in more depth.

Yet the heroes of this universe show time and time again that they are incapable of fully imagining an alternative world to their feudal order. In perhaps the story's gravest misfire, even our hero-turned-villain Daenerys Targaryen, for all her efforts in breaking the chains of the old world to usher in the new, can still only ever envision a world in she is installed atop the Iron Throne, rather than a world without monarchs at all. In the show's final episode, as those who survived Dany's burning of King's Landing aim to rebuild society, Sam's meek suggestion of extending democracy to everyone regardless of noble birth is laughed out of consideration.

Given that so much of our recent popular fantasy and science fiction shows (but certainly not all—I can't read and watch everything!) rarely seem to introduce new political or economic systems, I wanted in my own story to showcase a different sort of arrangement. The story's hero, a young woman named Oyza Serazar, is indeed drawn to the possibility of such a world. Captured when she was young after her city is attacked by gun-wielding overseas invaders from a place called Hafrir, she was forced into a life of servitude before being thrown indefinitely into prison. But there, she reads a forbidden book she managed to smuggle in, one that calls into the question the divine authority of monarchs and the power the nobility, claiming the commoners ought to instead collectively manage society's productive tools in their own interests. At the same time, she's heard rumors of a mysterious new collectivity  calling themselves Ungoverned, deep in the swamps outside the ruins of her old city. Trapped in prison, Oyza can thus only ponder if the Ungoverned are real, if they practice the teachings of the book she loves, and if she might one day break free to find them.

Whether I succeeded or not remains an open question, but I do think there is much more room for fantasy and science fiction to conjure up worlds that defy the politics and economics of our own world. Socialist writers, anarchist writers, and communist writers are well-positioned to think differently about some of the most basic and everyday practices of life under capitalism. Why, in the science fictional future, is there always banking, money, markets, finance, wage-labor, corporations, inequality? Why, in the fantastical past, can we not see beyond monarchs, emperors, and kingdoms? Is it possible, furthermore, to not just imagine fictional worlds differently, but the very world we ourselves live in?

If there is anything that fantasy and science fiction writers can contribute to popular discussions about how to remedy the ills of our present historical conjuncture, it ought to be through the constant reminder that the new problems we face may never find their solutions within the confines of the old. Does capitalism, for example, provide us with the tools to solve a complex problem like climate change? If the history of capitalism is any indication about its future, the answer is resoundingly no. I thus recently find myself thinking more and more about an old slogan on the left that nonetheless remains powerful to this day: "another world is possible."

Kyle Galindez lives in Santa Cruz, California, where he is pursuing a PhD in sociology at the University of California, Santa Cruz. He's also gaming, hiking, and trying to stay active in DSA. His first novel, "The Spirit of a Rising Sun," was published in September 2021. Visit him at his author website: www.krgalindez.com.