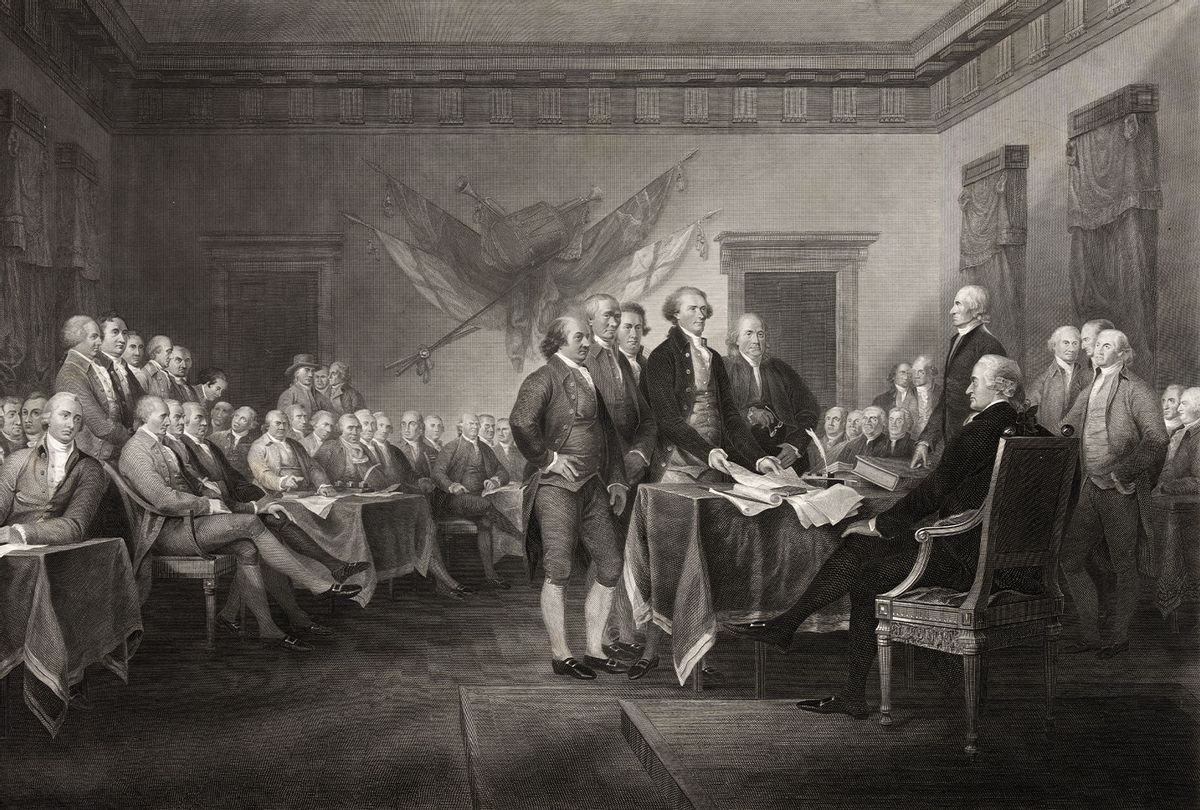 Signing of the Declaration of Independence (Getty Images/Keith Lance)
--

No sooner had Benjamin Franklin signed the Declaration of Independence than he was off, secretly, to France, on what seemed, in the winter of 1776, to be an impossible mission: to secure loans and arms from King Louis XVI.

Why would France — only a dozen years after its complete thrashing by the British in the Seven Years War and the loss of all North American colonies, in defiance of the Treaty of Paris and international law — risk helping revolutionaries? To exact revenge for their humiliating defeat? To rekindle an ancient rivalry between two royal families? And how, whether or not they succeeded, could the Americans ever repay any loans? The embryonic United States had no money, no banks and no credit.

Franklin, after decades of living in England as a colonial lobbyist, and as a noted man of science and inveterate traveler, knew Europe, its culture, its customs and its habits probably better than any other American. He was undoubtedly well aware of the highly popular fad of using costly cured, scented and finely pulverized tobacco called snuff.

Tobacco had first entered Europe at the end of the sixteenth century on Columbus's return to Spain from his second voyage of discovery. His crews had observed native Caribs smoking it. The Portuguese similarly brought the weed home from their base in Brazil.

In 1611, John Rolfe, Pocahontas's husband, introduced sweet tobacco from the Caribbean to Virginia. Planters soon grew nothing else, sending off their crops to England to be to dried and crushed to a fine powder called snuff.

The costly new commodity became a hallmark of the elite. Commoners couldn't afford it; they smoked their tobacco in pipes. Snuff inhalers were rewarded with a powerful charge of nicotine.

Snuff became a court favorite for men and women. In England, Queen Charlotte, wife of King George III and mother of 14, kept a well-stocked room full of her favorite varieties under lock and key in Windsor Castle. In France's elegant court at Versailles, Queen Marie Antoinette demurely took a pinch of snuff between the tip of her thumb and her index finger and inhaled it, considerately sneezing it into a scented handkerchief.

Aristocratic diplomats and businessmen competed by exchanging elaborately decorated snuffboxes, often of painted porcelain, sometimes of gold. Preferring the use of silver spoons to dip a bit of the powder, they kept their hands clean. Gentlemen carried small snap-top cases of snuff in their vest pockets.

France, having no tobacco-growing colonies, had to pay a premium to England to import fine flavored powder. The English forbade their colonies to sell tobacco outside the British empire. Extracting a fortune from the red soil of the Chesapeake colonies, English colonists grew rich from the backbreaking labor of ever-growing numbers of enslaved Africans, shipping half-ton barrels of leaves to London for processing.

Franklin and his colleagues on the Continental Congress's Secret Committee on Trade knew of France's snuff dependency on England. A full year before declaring American independence, Congress, in defiance of British law, declared their ports open for foreign trade.

French diplomats had been watching the growing American resistance movement. On a secret mission, the French foreign minister sent playwright Beaumarchais to London with a million livre (pound) gift from the King.

They took up rent-free residence in the suburban palace of the foreign minister's brother-in-law and set about arranging cargoes of munitions to be sent to French ports in the Caribbean for transshipment to American forces.

By the end of 1776, French arms dealers were meeting with George Washington at his headquarters to take orders for weapons, tents and uniforms.

American financiers funded construction and rounded up crews for hundreds of heavily-armed merchant ships to transport cargoes of crops to the French and capture British prizes.

RELATED: America's violent birth: Why we shouldn't be surprised that U.S. politics is a blood sport now

By the summer of 1777, shiploads of French cannons arrived in America just in time to defeat a British army at the pivotal battle of Saratoga. Convinced that the Americans could succeed, Louis XVI signed a treaty of trade and military alliance with Benjamin Franklin and his fellow emissaries.

Whenever an American diplomat came home, he went to Versailles to say adieu and receive the gift of a snuff box adorned with a flattering portrait of the king and a sprinkling of jewels. Benjamin Franklin was the king's favorite. He gave the foreign minister special instructions: Franklin received a gilded snuff box, the royal effigy surrounded by 401 diamonds!

The final battle of the American Revolution was a double victory for the French. Their cannon and their fleet had boxed in the British at Yorktown. Not only had they helped their American compatriots win independence, but France had secured the monopoly on American tobacco. No longer would they depend on England for every sniff and sneeze.

More stories on the Founding Fathers and American history:

Willard Sterne Randall is the author of "The Founders' Fortunes: How Money Shaped the Birth of America" and "Unshackling America: How the War of 1812 Truly Ended the American Revolution," as well as biographies of several of the Founding Fathers. He is a distinguished scholar in history and professor emeritus at Champlain College who specializes in the history of the Founding Era. Prior to academia, he worked for 17 years as an investigative reporter, during which he garnered the National Magazine Award, the Hillman Prize, the Loeb Award, and the John Hancock Prize.