Why Midge and Lenny are the Carrie and Big of “The Marvelous Mrs. Maisel” 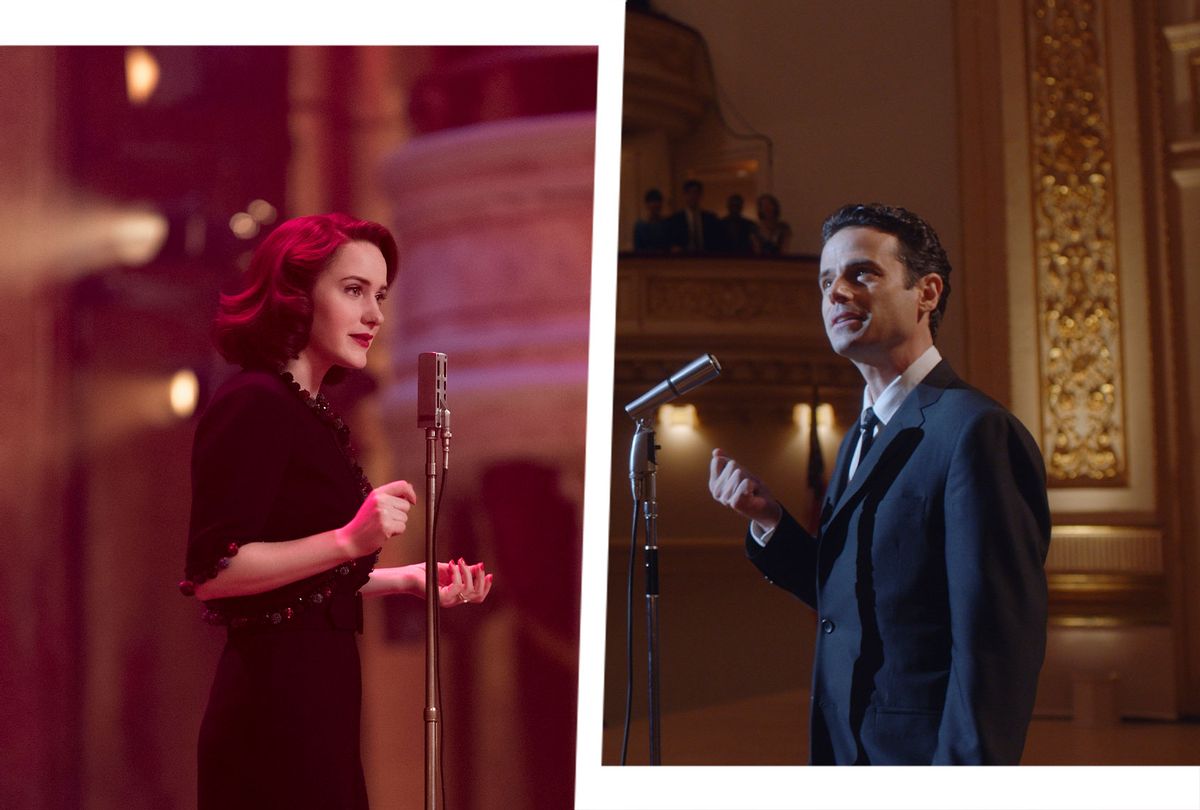 It was when Midge, the comedian of "The Marvelous Mrs. Maisel," began talking to her shoes that the resemblance really hit home.

Who was Midge recalling as she perched on the arm of a hotel room chair, a high heel in each hand, saying to them, "I'm so sorry, girls. It wasn't supposed to end like this"? Then it hit like the snowstorm that had dumped on Midge, drenching her, causing her to apologize to her soggy footwear: Carrie Bradshaw.

It's not just the shoes, and the fact she has a new outfit, bag to match, in almost every scene. Midge, the late '50s/early '60s housewife-turned-stage-sensation in the Amazon Prime show, has a lot in common with Carrie, the relationship-columnist-turned-podcaster in present-day New York's "Sex and the City" and its sequel "And Just Like That."

Midge is an obviously talented writer, like Carrie. She's bound to Manhattan. And Midge is entangled with a man — a man, in some ways, a lot like Carrie's Mr. Big, their history together just as complicated and their future, uncertain.

One way that "Mrs. Maisel" veers drastically from "Sex and the City"? Midge hasn't dated much since being left by her husband, Joel. Who has the time between trying to maintain a career in standup, handling her parents, who live with her now, and occasionally seeing her young children?

But Midge has had a man consistently in her life as a friend, confidant and sometimes mentor: Lenny Bruce. Yes, that Lenny Bruce.

Lenny Bruce was a Jewish comedian, critic and screenwriter. Born Leonard Alfred Schneider, Bruce was a stage name. He rose to fame in the late '50s and early '60s with freewheeling standup, which included a lot of sex, politics and biting social commentary. That got him often blacklisted from appearing on television, barred from Britain and landed him in legal trouble, including multiple arrests for obscenity.

Midge's tough and tiny manager with a heart of gold, Susie, reigns supreme as the best part of the show for many viewers, but Lenny (Luke Kirby) is definitely in the running. The inclusion of his based on real-life character is inventive, a kind of alternative history. It helps that Kirby virtually channels Lenny in a moving, transformative performance (which Lenny's daughter Kitty Bruce approves of). Kirby keeps opening up layers of the character with every tossed-aside cigarette and pacing routine.

Lenny of "Maisel" has commonalities with Mr. Big — the most enduring of Carrie's love interests and the one she ends up with — in the comic's presence, reputation and the way he drops in and out of Midge's life, always reappearing right when she needs him like some kind of standup fairy godmother.

Lenny is much more established than Midge. He's famous when they meet, thrown together in the same cop car. While that "meet cute" doesn't have quite the same romance as Carrie meeting Big (when he stops to help her pick up her fallen purse on the street), it's certainly memorable. So is the way the show films it: with the stranger in the back of the cruiser, cigarette hanging from his lips as if glued there, turning around to slowly reveal the already renowned comic.

When Carrie meets Big, she's a struggling writer and he's a successful and mysterious businessman; his nickname emerges from how he's predicted to be the next big thing, perhaps "the next Donald Trump" (a line that didn't age well). They keep bumping into each other on the street or in bars, just as Midge and Lenny do, a planned randomness which makes more sense since the two comics orbit the same general circuit. There are only so many clubs in New York.

Lenny's appearance is always welcome for Midge and for the viewers. Someone she knows. Someone who gets what's she doing late at night in whatever dim and smoky club she's in. Whether a strange man is hitting on her in a Florida bar — or, fresh from the hospital, she's just given an emotional performance at her resident strip club — Lenny appears like an island she can row to. "I never picture you living anywhere," she says to him. "You just exist."

But Lenny, like Big, has a reputation as a cad. Part of that is his vulgar, bad boy act and persona, and part of that is just the character. At the end of the fifth episode this season, Midge looks out a cab window to see him passed out in a gutter, like Edgar Allen Poe, in an unusually dark moment for the show.

She brings him to her (parent and child-filled) apartment to let him sleep it off, and when he wakes, he's raving, upset that she's given him a glimpse of her domestic life, something he says he wants nothing to do with, despite being a father himself. That's the first Midge has heard of his parenthood.

Much of "Sex and the City" was this kind of dance between Carrie and Big, the one who got away; and yet, at the same time, the one who was always there. The reveal in "And Just Like That" that Carrie and Big stayed married until his odd death felt like a kind of inevitable surprise. Not necessarily a pleasant one. Big was never a good man, nor great for her specifically. He cheated, including on his first wife with Carrie, and seemed to only be interested in Carrie when she was happy with someone else. He left Carrie at the altar their first go-round.

Still, Carrie and Big matched in many ways — certainly in their desires for success and comfort, in their love of New York. And intellectually: both Carrie and Big are smart, witty characters. That wasn't the case with everyone Carrie dated, and it has to be lonely for a woman to be with a man who can't keep up with her.

Midge and Lenny have always matched in the same way. When Lenny takes her on live TV with no warning, she doesn't miss a beat. When he does a bit, she follows and vice versa. While Big bails Carrie out financially, Lenny does it literally for Midge, and she for him, as the two find themselves arrested off and on.

How Lenny diverges, dramatically and fortunately, from the character of Big is in his heart. He's an extremely vulnerable character, exuding a fragility we have seen more and more this season, as if pulling back the curtain on the price an artist pays. Much of the trash talk is just that — talk.

In the final episode of the show, which dramatizes Lenny's real performance at Carnegie Hall (which did take place in a blizzard, a gorgeous opportunity for "Maisel" to showcase 1960s New York in evocative, snow-lit splendor and for poor Midge to ruin more shoes), the audience braces for the worst as Lenny begins to riff on stage about women. Midge is there, at the back of the crowd, with the hopeful glow of someone who may be at the beginning of something big.

But he doesn't exactly kiss and tell. And he doesn't talk about Midge, rejecting a page from her playbook to use very fresh personal life experiences for painful fodder. Life is painful enough for Lenny's character; indeed, this episode also hints at the drug addiction which took the real Lenny Bruce from the world.

Lenny also differs from Big in that Lenny is good for Midge. Unlike most of the men she's been with, Lenny actually wants Midge to perform. In fact, he says she will break his heart—not if she rejects him romantically, but if she keeps turning down opportunities due to her stubborn, self-righteousness. He lacks the professional jealousy of Joel and the professional comedy world cluelessness of Benjamin, Midge's left-in-the-dust doctor ex-fiancé.

Lenny is in the spotlight. But crucially, he wants Midge to be there too, knowing it's central to her happiness — and important for the art form — and knowing there is room for her.

When stories from "Friends" to "The Mindy Project" finally cracked the tension between platonic friends who might feel attraction, even love, for each other, they often lost some of the magic. Lenny Bruce has never followed the rules, though. And Midge loves to break them.

If "Mrs. Maisel" follows the script of history, we're headed for tragedy. But the greatest comedy always is.