Why I'm going to Ukraine: We deserve the truth — and that's my job

Reporters are risking their lives to tell the truth about Putin's war. Some have already died. It's worth it 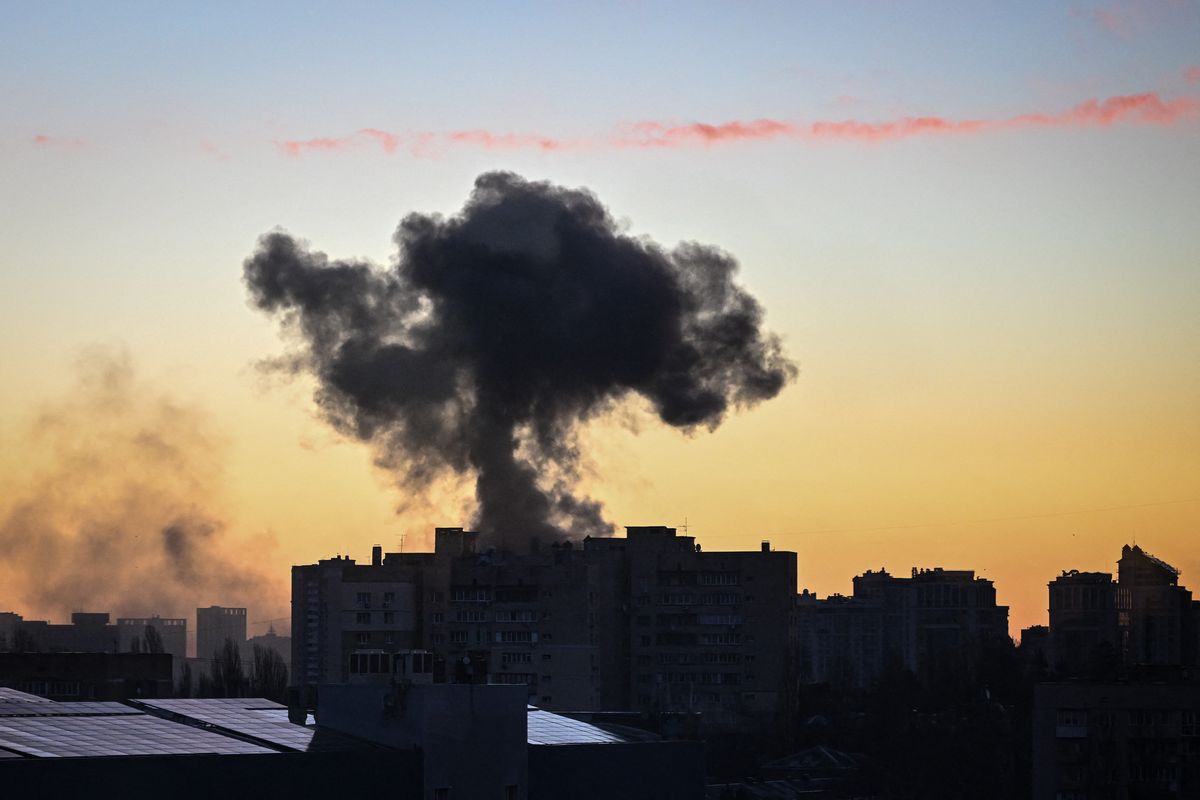 Several explosions rocked Kyiv early on March 16, according to AFP journalists in the city, with emergency services saying two residential buildings were damaged and two people wounded. The blasts came as Russia intensifies attacks on the Ukrainian capital, which was placed under curfew late March 15. (Aris Messinis/AFP via Getty Images)
--

It turned out to be just another Monday at the White House circus. The clowns came and went. The trapeze artists did their high-wire act. The elephants crapped all over the place and someone forgot to clean up after them.

Under Donald Trump, such apt descriptions were used to define the administration. Today I use it to define the White House press corps. While the world is on fire, we're critiquing the wallpaper.

It's not like that everywhere, but if you're looking for reporters to push the envelope to get a story, best steer clear of the White House. I heard a reporter complain on Monday about losing money in the candy machine.

To tell the truth, there is still a lot of decent reporting going on, and people are literally dying for it.

At least three of those have died since Russia invaded three weeks ago.

Camera operator Yevhenii Sakun died when Russian military forces shelled a television tower in Kyiv about three weeks ago. Then documentary filmmaker Brent Renaud, a well-respected veteran of many conflict zones who has worked for Vice and the New York Times, was shot and killed on March 13 in the Ukrainian city of Irpin, outside Kyiv.

And the latest casualty is Fox News cameraman Pierre Zakrzewski, a conflict-zone veteran who was killed while news-gathering outside Kyiv on Monday,

"I don't know what to say. Pierre was as good as they come. Selfless. Brave. Passionate. I'm so sorry this happened to you," Fox reporter and former White House correspondent Trey Yingst tweeted Tuesday. Yingst is himself in Kyiv as I write this, trying to report the news while coming under sporadic fire and in constant danger.

All  these people represent the best of what reporters do for us, and even so they are often unappreciated. Everyone who dislikes Fox News paints the entire network with the brush that Tucker Carlson gives them because of his disingenuous, monotonous and Putin-happy rants. Zakrewski was an experienced and ethical combat photographer, who was trying to show people the horrors of war. The criticism of Fox as a network should no way extend to Zakrewski, who died trying to do his job.

You cannot compare what we do in the White House briefing room, even if it is done well, to what is done in a conflict zone. One is reporting, and the other is acting as a mere stenographer.

I asked during Monday's briefing with press secretary Jen Psaki whether Russian hit squads were roaming the countryside in Ukraine looking for reporters. It makes sense that Putin would target us in the field. He doesn't want anyone to know what he's doing. He's responsible for the deaths of many reporters during his career, and he'll be responsible for many more if we let him.

So as the briefing ended and no one had asked the question, I spoke up:

Q: Jen, can you confirm or deny the rumors that there are Russian hit squads in Kyiv going after journalists?

Psaki:  I don't have any details on that for you.

Psaki: I can see if there's more.

On Tuesday another reporter asked a similar question. This time Psaki was better prepared:

Q: Is there any reason to conclude that the Russians are deliberately targeting them [journalists]?

Psaki: We have seen from the beginning that they have targeted hospitals, they've targeted journalists. In terms of these individual cases, I can't make an assessment of that from here. But certainly, we've seen, you know, barbaric and horrific actions by the military on the ground, and this is consistent with that.

Putin is a tyrant. He's been a danger on the international scene since he emerged as the leader of Russia. He wants to re-establish the Soviet Union, he's tried to undermine democracies and destroy NATO. He is the most dangerous irritant on the planet today.

His regime has murdered reporters while sowing seeds of distrust worldwide — and Donald Trump wanted to be just like him.

We in the United States barely escaped that noose. It was reporters who pushed back against Trump — sometimes in the briefing room — and it was reporting that, despite all the threats and intimidation, helped to break the back of our American oppressor.

You want the truth? You can't lump everyone at Fox News into the same basket, any more than Trump could call us all "fake news" or the "enemy of the people." You can't toss everyone in the White House press corps in the garbage bin either. There are individuals who know what has to be done and are determined to do it. We need to encourage more of that.

RELATED: Is America really disintegrating? If so, it's been coming for a long time

H.L. Mencken noted the problems in modern journalism nearly a century ago. There is a career in journalism, he wrote, for the young person "of original mind and forceful personality — a career leading to power and even to a sort of wealth. In point of fact, it has always attracted" such people, Mencken noted. "It would attract a great many more of them if its public opinion were more favorable to them — if they were less harassed by the commands of professional superiors of no dignity, and the dislike of fellows of no sense. Every time two of them are drawn in they draw another. The problem is to keep them. That is the central problem of journalism in the United States today."

The three journalists who recently lost their lives in Ukraine were not the highly-paid and expensively styled anchors, or the pundits who get wads of cash to offer expert advice on information they've learned second-hand. They aren't sitting in panel discussions on cable news pontificating on things they know little about. They died while trying to inform the rest of us what is going on in Putin's chosen war.

Through these efforts, we can frame the narrative and come to understand Putin's motives. We can see the war crimes on video and through reporting. We understand the desperate nature of the conflict and understand how Ukrainian President Zelenskyy is holding out, and why he gave a live video address to Congress while rallying his people to their cause. Seeing the destruction, hearing the cries of Ukrainian children and other desperate people may be an assault on the senses. But it must be done so we can be informed. Social media is aiding in the exposition of Putin's cruelty and propaganda, but trusted, disinterested third-party observers, (i.e., reporters) can dispassionately frame the narrative while also dispelling rumors, myths and fiction by being eyewitnesses.

When I was a young reporter working in Laredo, Texas, I had a city editor, Peter Lee, who told me that most people run away from a burning building. First responders and reporters, he reminded me, run toward them. "And nobody wants the reporter there," he said with a smile.

It's not a new sentiment and it has stuck with me over the years. Some will appreciate the reporter's sacrifice, many will disparage it and many more won't understand it.

Most war correspondents are not remembered through history, although the history they record is often remembered by everyone. Yates McDaniel comes to mind. Jack Torry, in his recent book "The Last One Out," writes about McDaniel, a young reporter who took astonishing chances to provide credible eyewitness news to the public during World War II.

At a time when journalism is under siege by the right and the left for reasons both real and imagined, it would do us all well to remember that there are still those in this profession who take the view that a wealth of knowledge is more important than a wealth in currency, and that being an eyewitness to history and informing our fellow citizens is among the highest callings we can answer.

If that sounds like dreck to you, so be it.

But many of these people are truly selfless. I've known photographers and reporters who willingly put their lives on the line for no other reason than to show and tell everyone what they see — with no pretense, no prejudice and no ulterior motive. The cynics among us often see bias where none exists — unable to accept the facts as presented to them, they question the motives of those who risk their lives to provide the information rather than question their own predetermined mindset.

As long as humankind continues its inhumanity against itself, reporters will be there to chronicle the events. It is inevitable. They will be unarmed. They will carry notepads, pens, cameras, laptops, cellphones and microphones. They will continue to put themselves in harm's way for one simple reason: We need to know.

That's why I'm going to Ukraine.

Read more from Brian Karem on politics and the Biden White House: