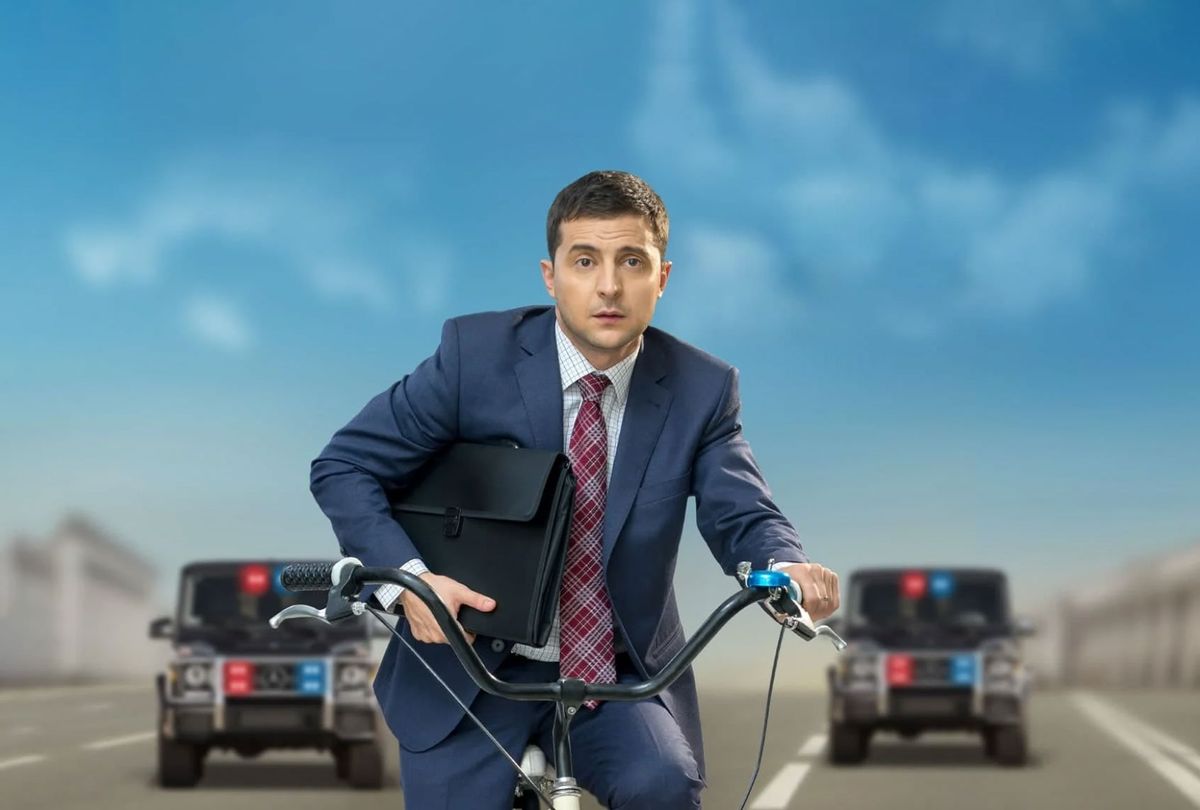 Volodymr Zelenskyy in "Servant of the People" (ECCHO)
--

War has placed "Servant of the People" in the unique position of making Ukrainian president Volodymyr Zelenskyy more sincere than his wartime videos already made him out to be. That is no easy feat to pull off in in television, a medium that politicians famously exploit in nefarious, corrosive ways.

Americans know this, or we should, having survived the debacle of Donald Trump's presidency, which he won by bamboozling voters into believing that he's a successful mogul. But Trump lacks the brains and creativity to edit his persona into an intelligible TV character, let alone that of a level-headed leader. He's simple wearing out a pattern created by reality TV producer Mark Burnett.

Zelenskyy, in contrast, forged his high school history educator Vasyl Petrovych Goloborodko. He wrote him as a patient, learned man who falls asleep with his nose buried in "Plutarch's Lives," humbled by a divorce and deflated by a paltry paycheck.

His rise to power in "Servant of the People" is completely accidental, the result of a rant about political corruption that one of his students surreptitiously films and posts online. Everything he says about the false choice of most modern democracies reflects a common frustration among Ukraine's working class, down to the expletives: "It's always the lesser of two a**holes and it's been that way for 25 years!" he fumes, later adding, "If I could have just one week in office, if it all possible, I would show them...Have a simple teacher live like a president and a president live like a teacher!"

RELATED: Politics & performance: Why Zelenskyy succeeds where others fail

Goloborodko's bold words get his candidacy crowdfunded and his name on the ballot. His victory surprises everyone, including the trio of  "deep state" oligarchs who assumed one of the stooges they purchased would win. Initially they view the political outsider as an entertainment. This changes when they discover he can't be bought.

Until now, many fewer Americans have seen "Servant of the People" than "The Apprentice," which is a pity given the remarkable contrast between these two shows and the leaders they produced. It was always available on YouTube, but its Netflix placement moves it into the mainstream at an opportune moment.

"Servant of the People" streamed on Netflix between 2017 to 2021 before it was removed. The streaming service resumed running the first 23 episodes of the satire on the same day Zelenskyy addressed members of Congress to make an appeal for more military aid, making him even more top-of-mind this week than he already was.

For Netflix, adding the comedy is an easy demonstration of corporate goodwill, especially after suspending its service in Russia along with halting future projects and acquisitions from that country. But to the typical viewer, its wider availability provides another window into Zelenskyy's identity, and Ukraine's, beyond what we see in brief clips.

Importantly, "Servant of the People" is a clever, mordant, earnestly positive comedy. It has its dark corners, but always finds it way out with hope, and without making fools of its ordinary folks.  American viewers wary of being left cold by another culture's style of humor needn't be. It only takes a few minutes to recognize how similar Goloborodko's home life is to what we'd see in a typical working-class sitcom – only a shade goofier, somewhere on the smarter side of the scale between a Norman Lear classic and "Married with Children."

Then the "West Wing" meets "Dave" arm of the show kicks in, along with the show's jabs at the political class. The president-elect is marched through a ridiculous image makeover, introduced to a miles-long parade of assistants and assistants to assistants, and whisked off to a palace he neither wants nor needs, all of which show how the wealth of Ukraine's taxpayers is being wasted. 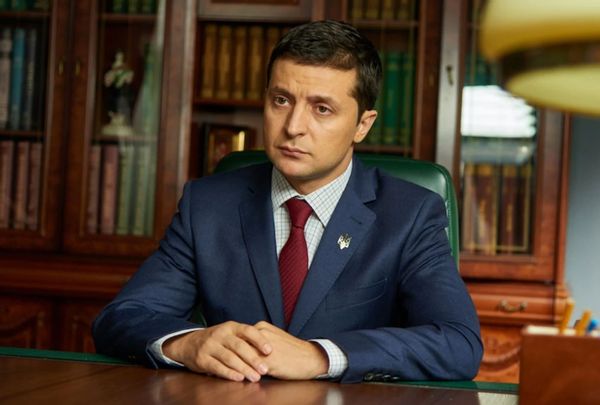 Volodymr Zelenskyy in "Servant of the People" (ECCHO)Once power is officially transferred into his hands, he uses it to enact sensible bureaucratic reforms such as centralizing the government's offices into a single set of buildings to relieve traffic in the capital. These frugal moves seem radical. Other decisions play as comical even to the voters, including Goloborodko's dismissal of his personal security and insistence upon taking public transportation instead of commanding a motorcade.

In his inauguration address he refuses to make promises he can't keep, mainly because he admits he's out of his depth.

"I do know one thing," Goloborodko says in summary. "One should act in a way that doesn't evoke shame when looking into children's eyes. Nor their parents'. Nor your eyes, of course. This is what I promise you, the people of Ukraine."

Zelenskyy and his history teacher are unalike enough for the man to argue that he is not his creation. Prior to winning office Zelenskyy was already a very famous and successful comedian known across Europe who built a career on braiding his comedy with political critique.

He did not need to live with his parents and niece in a crowded flat as his hero continues to do. Of course, this subplot serves the larger comedy, since the elder Goloborodko's first act upon hearing his son is the nation's new leader is to kit out his home with gaudy masterpieces and a "razor thin" TV – all obtained at a handy 100% discount.

Beyond this, however, we've seen enough of how Ukraine's leader performs under pressure and threat of death to understand whence his schoolteacher president's principles originate. Great leaders visit Goloborodko in his daydreams and when his back is up against the wall. In the same way Zelenskyy paraphrased Winston Churchill while making his case before Britain's Parliament, his TV president channels Abraham Lincoln's wisdom and speechcraft.

In another episode, Che Guevara goads him into indulging power's vilest impulses. Much later in the season, at the lowest point in his presidency, Louis XVI sidles up to Goloborodko to warn him that his reward for enacting much needed government reforms might be to lose his head.

Still, he presses on, insisting he's doing his best by Ukraine, a declaration its citizens believe until they don't. That's the reality of politics.

"Servant of the People" debuted in 2015 and ran for three years, five months and 51 episodes, including a movie. One day it may be considered one of the most successful long-game TV campaigns in history. It was beloved enough for journalists to be skeptical of Zelenskyy's declared anti-corruption platform, which sounded nebulous . . . unless a person was already convinced by his history teacher president's firm sense of ethics.

In the first season we do not see Goloborodko in wartime, although if we did it would be easy to picture him lobbying other world leaders for aid wearing drab t-shirts and fatigues. Men in suits are not men who roll up their sleeves and get their hands dirty; besides, he's a man who clips closed his pants cuffs with a clothespin to make his bike ride safer.

But its broader usefulness, along with elevating Zelenskyy's profile in Eastern Europe, is to inspire people to demand something other than business-as-usual in their leadership. The show's comedy walks the line between arch and broad, but the unifying message is one of earnest sincerity – the same version the world appreciates and has praised in his viral videos.

We also can't ignore that watching "Servant of the People" in the current circumstances casts a pall over the optimistic pragmatism with which it was written. Every day that the Russian war rages on increases the possibility of the show serving as a memorial for a leader who saw an opening on the world stage for himself and his people and leapt in to fill that role.

Its existence and additional exposure also emphasizes how badly Vladimir Putin has lost the propaganda side of the war, something Zelenskyy ensured by making the Russian president the butt of several jokes in the show. A recurring bit involves Goloborodko stopping fights by yelling "Putin's been deposed!"

The fact that this is universally hilarious says much about how much the world despises Russia's leader and, at the same time, what an unlikely miracle most of us presume that to be. A healthy fear of that shirtless autocrat riding horseback is ingrained into that culture, but that two-dimensional figure has nothing on Ukraine's satirist.

Most actors aren't capable of doing the jobs they play on TV, but Zelenskyy's frontline video messages and appeals to government bodies prove how ably he's leading his people in the direst of circumstances. Seen in the wake of those scenes "Servant of the People" reveals itself as a sort of leadership blueprint and a view into Zelenskyy's raw character. As far as we can tell that part is very real. It also happens to play well on the show.

The first season of "Servant of the People" is currently streaming on Netflix. Watch a promo for it, courtesy of Eccho Rights: