Politics & performance: Why Zelenskyy succeeds where others fail 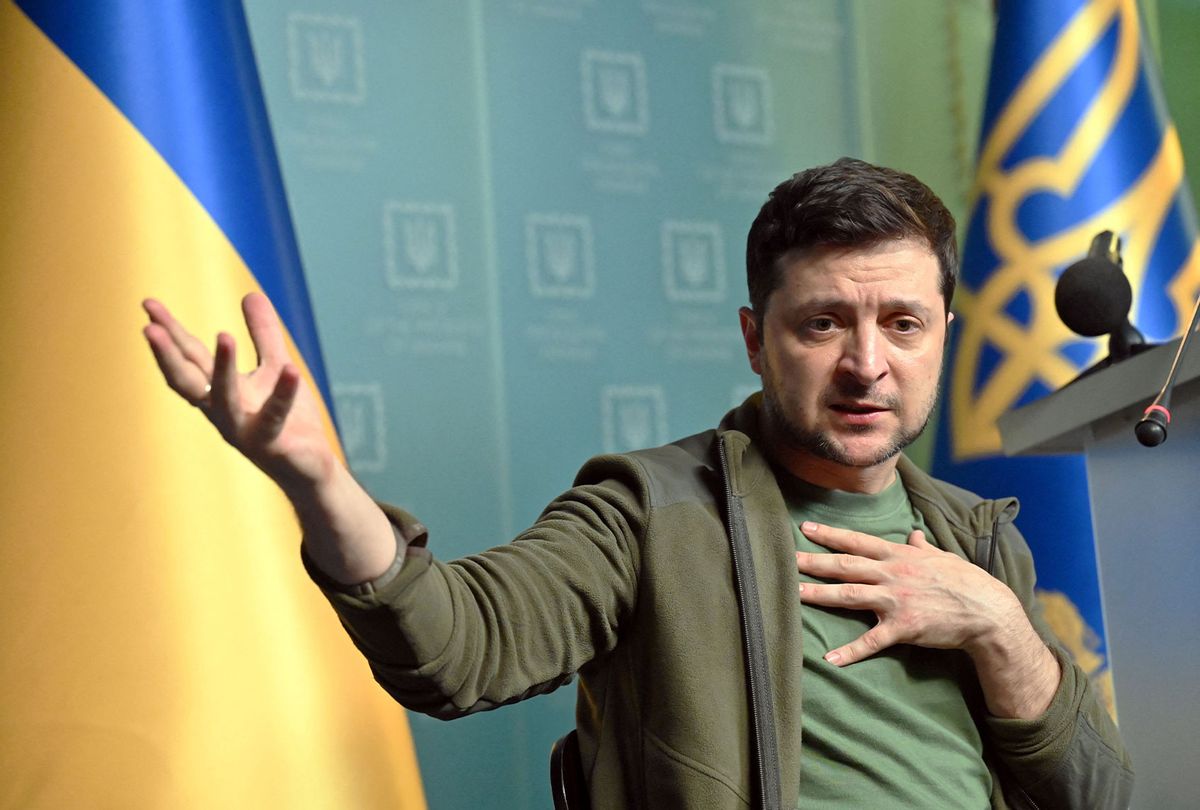 Ukrainian President Volodymyr Zelenskyy gestures as he speaks during a press conference in Kyiv on March 3, 2022. - Ukraine President Volodymyr Zelenskyy called on the West on March 3, 2022, to increase military aid to Ukraine, saying Russia would advance on the rest of Europe otherwise. "If you do not have the power to close the skies, then give me planes!" Zelenskyy said at a press conference. "If we are no more then, God forbid, Latvia, Lithuania, Estonia will be next," he said, adding: "Believe me." (SERGEI SUPINSKY/AFP via Getty Images)
--

One emergent piece of trivia about Ukraine president Volodymyr Zelenskyy that may have conquered more hearts and minds than any video propaganda ever could is that he provided the voice for Ukraine's versions of 2014's "Paddington" and 2017's "Paddington 2."

Politicians playing roles in movies stopped being novel decades go, but this is something else. Paddington Bear is a children's literature institution, a soft-spoken, polite character who disarms adversaries with kindness. He's also a talking bear, pure fiction, and Zelenskyy isn't channeling him in the role he's playing right now.

However, in each of his persuasive speeches to world leaders and conversations with journalists, Zelenskyy conveys the deportment of a rational, determined man. In the viral video he filmed in a studio and others taken in the streets, using his own mobile device, he's personable and calm. Reassuring.

Vox's Emily VanDerWerff wrote a defining piece about the ways in which Zelenskyy is using his stagecraft to successfully dominate the propaganda space, analyzing his expert staging of backgrounds and angles, even breaking down the importance of where he stands in each frame.

Another element I hope people also appreciate is that this world leader standing up to a savage, unprovoked attack by Vladimir Putin is a comedian. There are many ways to misinterpret my pointing that out, so let me be clear – this is not an identifier Zelenskyy is overcoming on the world's stage, but another asset he's using to resist Russian president Vladimir Putin's tyranny.

RELATED: Not every star should speak to a crisis

Zelenskyy's comedy and his filmmaking skills are hand-in-hand endeavors. A veteran of comedy troupes, including one called Kvartal 95, which he co-founded, Zelenskyy cultivated his popularity as a TV personality. In addition to starring in several movies, he won the first Ukrainian edition of "Dancing with the Stars" in 2006 and hosted a number of live shows, including the variety sketch series "League of Laughter."

Kvartal 95 morphed into a production studio responsible for a number of popular shows, including the comedy "Servant of the People," in which Zelenskyy stars as a high school teacher named Vasyl Petrovych Goloborodko who becomes president.

"Our ambitious objective," he says in a quote attributed to him on the Kvartal 95 website, "is to make the world a better place, a kinder and more joyful place with help of those tools that we have, that is humor and creativity. We are moving towards this goal, trying to conquer the whole world, of course ;)"

Cut to his quick turnaround to responding to Russia's claim in the opening hours of the invasion that Zelenskyy and his leadership had fled the country. Standing in the streets with his mobile phone, he filmed a concise statement to the Ukrainian people, and the world, to debunk that lie. It's also very carefully set up to show all of the leadership in the shot, whether shoulder-to-shoulder with him or at his back.

"Good evening, everyone," he says in that Feb. 25 video. "The leader of the faction is here. The head of the presidential office is here." He goes on to list the names and positions of the four men standing with him before saying, "We are all here. Our soldiers are here. The citizens are here and we are here. We defend our independence. That's how it'll go."

He doesn't say this with pumping fists, a raised voice, grim solemnity or worse, no emotion whatsoever. He is solid. He is explaining how it is to an audience hanging on his every word, offering them a firm hand to hold. The message is a simple curtain-dropper on a fallacy.

Then he comes his battlefield version of "Thank you, and goodnight": "Glory to our defenders, both male and female. Glory to Ukraine."

Rightly or unwisely, we look to comedians in stressful times because we trust them to make sense of madness. We see them as our truth tellers, our guides for taking power over despair or relieving tension with laughter. The best are also improvisational specialists, a skill Zelenskyy calls upon in his interviews with international press, in his speeches to the world leaders and his viral video offensives.

The comedian wins the audience by making people feel good, or better, by being honest even when they tell tall tales. They bring us to their side with empathy. But in most sets there's a point where the noise is meant to die down and the folks in the seats are meant to listen to the point of the night's exercise, to take in the truth of it all. This is a sunburst through a cloud of deception, one last invigorating eye-opener before the "thank you and good night."

This cannot help but read as trite in a hellish conflict where hundreds of civilians have been killed and more than a million people have been displaced. Putin's attack and his reasons for it are anything but funny, but they are entirely absurd.

Since exceptional comedians know how to navigate such surreality, that also equips them to handle drama. In America we constantly claim surprise when a slapstick MVP like Jim Carrey or Adam Sandler tears into a dramatic performance that skeptics assume to be beyond them.

In truth, the comedian's facility with heightened personas gives them an edge when they're asked to navigate the subtleties of human emotion. We love Bill Hader as Stefon, and we also believe the stabbing pathos he brings to "Barry." Both parts capitalize on empathy, comedy's foundation.

Empathy brings fan bases together around a common cause or a personality championing that cause. This can take a dark turn, of course, as we've seen in recent examples provided by Dave Chappelle, Joe Rogan or other popular comics who use their platform to lash out instead of punching up.

Their fanbases may not have much grace for those designated as members of an outgroup, which is why they attack those who aren't part of their tribe.

Politicians exploit our urge to empathize with heroic performers all the time; witness the rise and fall of the "Cuomo-sexual" weirdness that arose about former New York governor Andrew Cuomo's made-for-TV displays of transparency and competency at the height of the pandemic.

In the United States we're still living with the consequences born from the more egregious merger of a showbiz personality with politics; the difference is that our 45th president is not an actor or even a comedian. He's not even the business success he played on TV.

Hence, in 2017 when North Korean dictator Kim Jong-Un engaged in some antagonistic chest-thumping, the former host of "The Apprentice" responded, unimaginatively with assurances of raining down "fire and fury and frankly power, the likes of which this world has never seen before." The dictator responded with a heckling that briefly make the term "dotard" the world of the day.

Real danger was never on our nation's doorstep, not in the way Zelenskyy is facing it down, and the growing direness of the situation in Ukraine requires the type of level-headed leadership he's modeling.

Zelenskyy is plugged into a more potent version of empathy, however, and this is what we're seeing play out.

Zelenskyy's establishment-upending election in 2019 walked a similar path to that of his fictional character. In "Servant of the People," Vasyl arrives at his inauguration ceremony in a taxi. Zelenskyy nixed the usual motorcar parade to walk among the throng that elected him, taking selfies with people along the way.

This wasn't merely about living up to his show's title, or the political party named for it, which claimed a majority of seats in the nation's parliament following the snap election Zelenskyy called as his first act of office. (That consolidation of power is reason enough to be wary of the Ukrainian leader's newfound fame, regardless of people casting him as the comic delivering an unexpectedly strong performance in the toughest part any human can play.)

Zelenskyy knew the value of playing the civil servant his voters imagined him to be. Now he's simply doing what many actors who play presidents on TV have done, which is to be the leader his people need.

The "Paddington" line in his filmography only makes people like him more, adding to the story of a vicious authoritarian who misjudged how tough Zelenskyy,  a man who gave a gentle bear a voice his people could believe in, would prove to be.

More stories related to this: