Dear Hollywood: In times of international crisis, speechlessness is always preferable to stupidity

Stars: they're scared, just like us. Very few are equipped to speak to crisis, as we were reminded this week 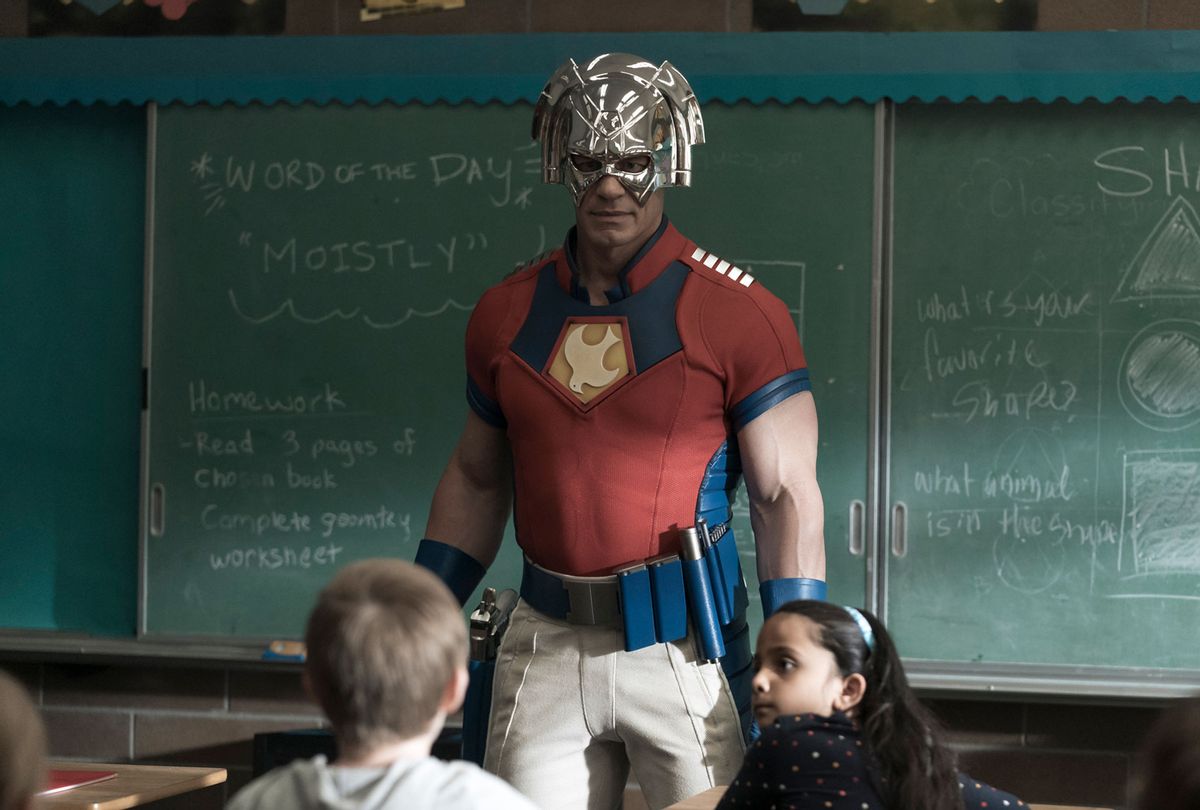 Crisis and its twin, tragedy, remind us of our frailty. One cannot fairly call them great levelers, since each of us is affected and reacts differently according to our resources. But they also engender a common feeling of not quite knowing what to do.

That was not the case for marginally famous actor AnnaLynne McCord though. Apparently the news of Russia invading Ukraine moved her read an open letter directed toward…the violent despot responsible for starting this war. Cringe-inducing as that description is by itself, the product is so much worse.

"Dear President Vladimir Putin," McCord says, gazing into the camera, her blonde waves tousled just so, "I'm so sorry that I was not your mother."

You read right. McCord, best known for playing the heel on the "90210" reboot, is chalking up the Russian strongman's impulse to take over a neighboring nation by military force to poor parenting. Then, compounding horror upon horror, we soon realize she's not reading a letter but performing a poem.

"If I was your mother, you would have been so loved/Held in the arms of joyous light/ Never would this story's plight /The world unfurled before our eyes/A pure demise of a nation sitting peaceful under a night sky…"

Throughout the ages, war has moved artists to create works that speak to the moment. But this is as far from Pablo Picasso's "Guernica" as a person can get. And sure, who among us hasn't wondered whether the right intervention could have prevented Adolph Hitler from becoming a genocidal fascist? Still, this is also a far cry from that famous "Doctor Who" episode that played witih such a scenario. McCord's two minute and 20 second word drool is so godawful, in fact, that one can almost picture Amanda McKittrick Ros crying out for mercy.

But the worst novelist ever did not have followers on Twitter, Instagram and TikTok feeding her ego with likes, retweets and replies. On normal days such followers and fans instill in celebrities a duty to keep their purported lines of communication open and parasocial relationship tanks topped off. So when disaster strikes they may feel obligated respond to enormity with rhyming couplets – or, like action star John Cena, a wish that the superhero he plays on TV were real.

"If I could somehow summon the powers of a real life #Peacemaker I think this would be a great time to do so," he tweeted on Thursday – and sure, there's nothing wrong with calling for peace.

But at best, Cena's tweet was interpreted as using breaking news about a potentially catastrophic incursion to promote his HBO Max show. At worst, he's wishing that a fictional vigilante who vows to kill men, women and children for peace were real at a time when Russian soldiers are actually threatening the lives of men, women and children, and have killed at least 130 of them.

McCord's idiocy follows in the grand tradition of Gal Gadot's tone-deaf "Imagine" video, offered in the spirit of helping the world feel better as the pandemic first peaked in 2020 and tens of thousands of people were dying, by gathering other famous folks to join her in crooning a song that opens with, "Imagine there's no heaven."

This was followed by the famous "I Take Responsibility" video submitted by white celebrities apologizing en masse for not doing enough to speak up against racism over the years. Two years later we can see how very helpful that was.

What we are witnessing is another chronic flare-up of celebrity foot-in-mouth disease in the social media age. Unfortunately, there is not a cream for that, nor a cure. Be it pandemic, environmental disaster, a righteous protest or the outbreak of a conflict, you can count on at least one famous person to meet the moment with utter stupidity.

This condition is not necessarily limited to stars running wild on TikTok, Twitter or Instagram, either, although slices captured in other media inevitably go viral. Take this moment from a recent episode of "The View," in which co-host Sunny Hostin presented statistics intended to stress the ramifications of Putin's actions.

"Estimates are 50,000 Ukrainians will be dead or wounded, and that this is going to start a humanitarian crisis, a refugee crisis, in Europe," Hostin says. "We're talking about 5 million people that that are going to be displaced."

To which fellow host Joy Behar replied, "Well, I'm scared of what's going to happen in Western Europe too. You know, you just, you plan a trip, you want to go there, I want to go to Italy for four years, I haven't been able to make it because of the pandemic. And now this, you know?"

The singularly dire meaning of this moment is being experienced around the world, either in real time or close to the moment of occurrence, through our social media feeds. Unedited video of air strikes, bombings and ground confrontations is readily accessible via multiple online sources. Firefights and other combat footage are being uploaded to Reddit. Updates stream on Instagram live.

It was entirely possible to encounter Cena's Peacemaker wish an entry or two removed from the video capturing the bold last words from the 13 Ukrainian soldiers killed on Snake Island for defying a Russian warship's order to surrender. Mixing such urgent media with indulgent platitudes only sharpens the level of cognitive dissonance we're collectively experiencing as we witness these escalating hostilities from afar. Tens of thousands of people are expected to die or be wounded. Millions will become refugees. But yes, let's not forget that luxury vacations are likely to be further delayed.

Not all stars fall victim to their half-baked concepts. Some are acting in ways that are on brand while being of service. Sean Penn is in Kyiv to film footage of invasion for a documentary he's producing, which is a very Sean Penn move. He's also directly bearing witness to what Ukrainian civilians are enduring.

While Bravo reality producer Andy Cohen spelled out PEACE in Wordle tiles, took a screenshot of that image for an Instagram story and called it good, former "Real Housewives of New York" star Bethenny Frankel mobilized millions in supplies and funds to directly assist refugees crossing the border into Poland.

Does this burnish Frankel's image? Of course. But she's on the ground in Europe with her charity's team members.

Then there are those who cannot help but be personally invested because they have ties there, whether distant – as singer songwriter Regina Spektor shared in a personal note coupled with a family photo on Instagram – or direct.

While McCord was sharing her rainbows, "Dancing with the Stars" professional dancer Maksim Chmerkovskiy, who hails from Ukraine, has been sharing his experiences of being trapped in Kyiv as a civilian.

Chmerkovskiy was participating in the production of Ukraine's version of "World of Dance" as a judge. In an Instagram video shared as the assault began, he is candid about being scared and confesses guilt at knowing he has the privilege of being able to escape while so many of his fellow countrymen cannot, including friends and loved ones.

"Dear Russians, I know you know me," he says. "…I am not at this point someone who is pleading, you know, for someone else's safety from a far distance, from a safe distance. I'm somebody who's about to go into a bomb shelter because sh*t's going down, right?"

He continues, "So I think that in 2022 civilized world, this is not the way we do things. And I think that as a powerful, forward-thinking nation… I think the Russians need to get up and actually say something because no one's opinion is being heard. This is all one man's ambition of just … something.  However it sounds, however convenient it sounds in Moscow, however comfortable you are, where you are in Russia, I just, I just don't think that this is this is the right thing, that these are the right steps and this is the correct action."

Chmerkovskiy goes on to unintentionally contradict himself by saying he doesn't know what words to use, unaware of the bravery it takes to defy the very human instinct to lapse into speechlessness in the face of terror. The clarity of his unscripted message may even move at least one Russian citizen among 890,000 Instagram followers to answer his call.

Other widely known figures might amplify that message as well, along with links to relief agencies or other resources for Ukrainians seeking escape or assistance.

And there are artists who have crafted the right sentiments for this moment, whether they were written years ago by poets like Ilya Kaminsky or created recently, like this verse Amanda Gorman shared on Thursday.

There is no such thing as gentle war.
There is no peace
That can't be flung aside.
Our only enemy is that which would
Make us enemies to each other.

Gorman's words are meant to comfort and inspire. They might even prompt another famous person to generate something. In these dark times of escalating conflict and literary censorship, I would never tell any well-intentioned person to shut up.

However, based on recent displays, let's cross our fingers that the next star aspiring to show how much they care workshops said concept before posting it. If the world's dictators have no use for terrible poetry or juvenile wishes, assume the rest of us don't either. Silence may not be an option, but retweeting the wisdom of more adept thinkers is free.