Why "Law & Order" has returned, even if you didn't ask for it

What is the role crime shows play in lionizing the police? The O.G.'s return proves that TV hasn't learned much 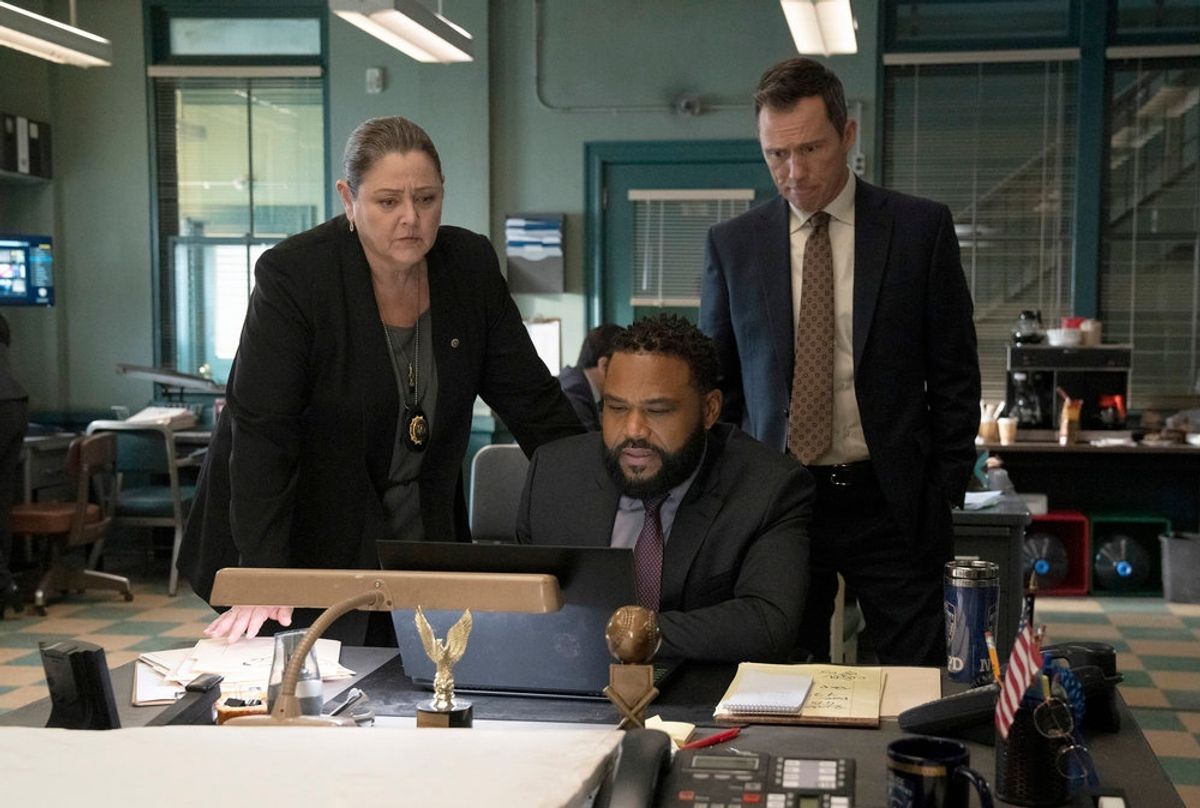 "Law & Order: Original Flavor" is back, baby! Its return arrives 12 years after its 20th and presumed final season aired, but still. You missed it, right?

Probably not, since "Law & Order: Special Victims Unit" has been carrying the franchise torch following NBC's retirement of the O.G. Now 23 seasons old and counting, "SVU" realized the goal franchise creator Dick Wolf had for the eldest child in his law enforcement family, beating "Gunsmoke" for the title of longest-running live-action scripted series in America.

But Wolf and the executive-level necromancers at NBC may be correct in wagering that people will want to witness the copaganda flagship's resurrection.

After all, Wolf's ripped-from-the-headlines methods are audience catnip, especially ones as ludicrously on the nose as Thursday night's homicide, featuring a celebrity who has much in common with former NBC star Bill Cosby.

Henry King (Norm Lewis) is a singer who drugged and raped 40 women, who, like Cosby, was released from prison on a technicality. (Cosby has repeatedly denied sexually assaulting any of his more than 60 accusers.) And since no murder drama can resist channeling O.J.,  King vows in a morning show interview to make sure "those responsible for this travesty of justice are held accountable."

But this PR smokescreen is abruptly blown aside by . . . his murder. Dun-DUN!

Remember all the hand-wringing over the role cop shows play in molding the public's perception of police as unquestionable heroes? Plenty of people wondered whether network TV would pivot after millions of people around the world took to the streets to protest police brutality and systemic racism in the summer of 2020. Prior to that, civil rights organization Color of Change released an analytic breakdown of the types of violations fictional polices engage in to get their jobs done. This was a clear, honest call for transformation.

Predictably, the networks viewed all that mainly as a media exercise.

You've probably seen the polls showing a decrease in support for Black Lives Matter a year after convicted former Minneapolis cop Derek Chauvin murdered George Floyd in plain view of bystanders recording the crime. Even if you haven't, the real answer as to why "Law & Order" is back is in Nielsen's ratings estimates.

The most recent season-to-date rankings by total viewers re-confirm the perennial popularity of one-and-done crimetime TV.  Nine entries in the Top 20 are cop shows – 11, if you count law-enforcement adjacent vigilante thrillers like "The Equalizer" and "Magnum P.I."

None of those are NBC shows, and on this same chart, "SVU" sits at No. 34 while the Christopher Meloni vehicle "Law & Order: Organized Crime" is No. 44.

What matters more is that "SVU" is a stronger performer among adults 18-49, the demographic advertisers chase, ranking just behind "FBI" at No. 18. In this demo, Wolf has five shows in the Top 20.

The numbers don't lie, which is why NBC wants more of Wolf's magic working for it. Hence, the return of that signature bass voice explaining that "in the criminal justice system, the people are represented by two separate yet equally important groups: The police, who investigate crime, and the district attorneys, who prosecute the offenders."

That narration never promised that the investigators or prosecutors would do their jobs ethically.

Then again, that's why Sam Waterston's return as District Attorney Jack McCoy is key. (This ties Waterston with S. Epatha Merkerson for the record of longest tenured cast member with what is now 17 seasons under his belt.) 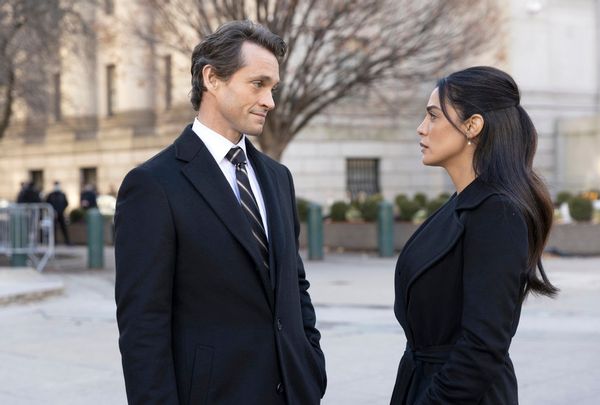 Together, mainly due to Donovan, they bring a distinct "Murderville" energy to their partnership.

"I know we haven't been working together for very long –" Cosgrove growls, before Bernard interrupts him with an expository tally of just how long it's been: "Two months, which makes you the longest relationship I've had in the last six years."

"Yeah, well, if we're going to keep this thing going, you got to know something," Cosgrove continues. "I speak my mind. Probably about things I shouldn't speak my mind about. But it's just how I'm wired."

This comes after Cosgrove gruffly steps up to a Black man simply minding his own business, resulting in bystanders pulling out their phones to film the interaction. "These damn phones – they ruin everything!" the hot-headed Cosgrove complains, to which Bernard counters that they hold them accountable.

Let's take a bet to acknowledge how abysmal this character establishing dialogue is – these guys have been working together for two months before this? But to know the "Law & Order" universe is to realize none of this matters. Cases trump character development here, leaving such mythology expansion to the likes of "SVU" and its methodical construction of the work marriage shared by Mariska Hargitay's Olivia Benson and Meloni's Elliot Stabler.

As with all of TV shows of this ilk, the return of "Law & Order" two years after Floyd's murder (and a week after former cop Kim Potter was sentenced to two years in prison for fatally shooting Daunte Wright in April 2021 in a Minneapolis-area neighborhood) doesn't mean it has modified its methods to portray policing more responsibly.

Meloni left "SVU" in 2011 only to return as Stabler last season, reintroducing the popular character as a broken man with a short fuse in "Law & Order: Organized Crime." Donovan's Cosgrove fits that mold, which is to say he's a cop who isn't above lying and bulldozing people's dignity if it means he closes a case. "Law & Order" has always taken pains to humanize such men, explaining why their unethical actions are simply part of doing their job. These are their stories, each episode reminds us, but it's also evidence of the story being out of touch with regard to current debates about policing.

If there is a shift, and I can only base this on the single episode provided for review, it may be in how we're meant to interpret justice and morality.

Oddly the Cosby-inspired case of this week likely distracts from deeper consideration of that angle; its main purpose, beyond its means of reminding us that our justice system isn't necessarily fair, is to reveal an unrealistic nobility in Dancy's Assistant District Attorney Nolan Price, and the stoic determination of his fellow prosecutor Samantha Maroun (Odelya Halevi).

Halevi is the only actor in this version of the "Law & Order" troupe whom we don't know, but she's in the company of veterans with whom we're primed to connect. This is certainly true of Anderson's detective, but I've no doubt that viewers will come to view Donovan's cop as a hero who only bends the law for the greater good. "Law & Order" diehards have excused all of their favorite detectives reaching out to Chris Noth's power-abusing Mike Logan. That may be one of the many reasons why real-world reforms to policing continue to face an uphill battle.

No profession could ask for a better public relationship machine than the one Wolf and fellow procedural creators and producers provide to law enforcement, free of charge. They know most viewers probably aren't prone to reflecting upon what their shows' open-and-shut, one-and-done cases teach the public about how the justice system realistically works.

But for one episode, it gives us something different to discuss in the ongoing talk about Cosby.