Contrary to what our TV binge-focused era might say, this drama's superiority is best appreciated with pauses 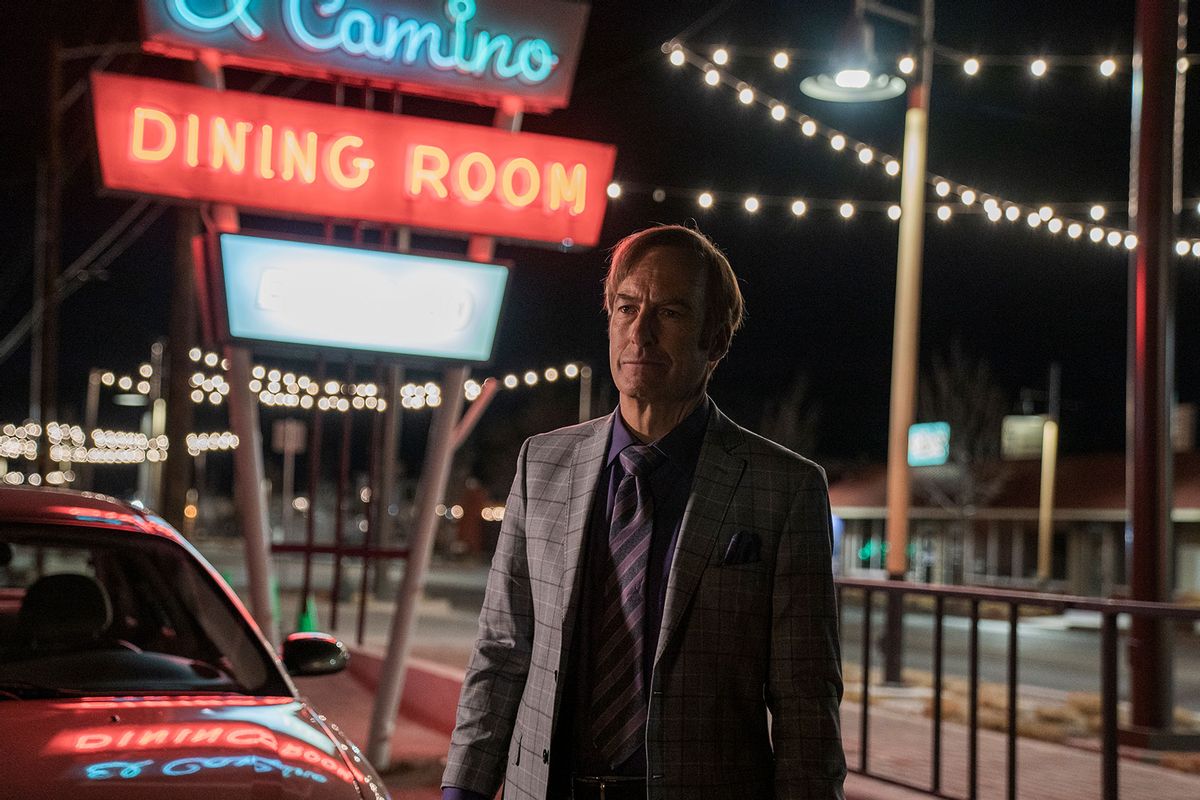 Every few years the so-called "slow movement" cycles back into vogue on some front. Maybe you've encountered a version of it – remember when "slow food" was all the rage? To explain it in layman's terms, this was and is a culinary practice defined by preparing dishes in a traditional manner using locally sourced ingredients, emphasizing food quality and the prevention of waste.

A noble practice that, like anything else of its kind, can be taken to bourgeois extremes. Its television equivalent is case in point:  Before people came up with a term for shows like "Better Call Saul"  there was a short-lived effort to attach the "Slow TV" label to any show that emphasized marinating the audience in character development and mood. Multiple episodes might pass before "anything happens" – which is to say the writers might wait for several installments to turn up the flames, whether that heat takes the form of scandal, betrayal, swift reversals of fortune or the reliable trigger of violence.

Nowadays when we consider shows like that, they fall under the label of Prestige TV. Mentioning that term undoubtedly recalls the Divine Quartet of "The Wire," "The Sopranos," "Mad Men" and "Breaking Bad," the show that originated Bob Odenkirk's Saul Goodman.

All these shows set the standard for capitalizing on audacious cinematography and conscientiously economic writing to evoke tonal details, inviting audiences to contemplate the smallest flourishes that go into the grand payoffs. Other series tried channeling this slow-burn approach but we mention them far less frequently, in the same way that some "slow food" recipes are in fact examples of entirely average cooking.

(Slow TV is an actual genre, by the way, and separate from the "prestige" designation. It was innovated by Norwegians who put a live broadcast of a seven-hour train journey on TV and discovered there was a hygge audience for it.)

Earlier prestige dramas also enjoyed a common coming of age somewhat before what I'll call the Age of Provocation, defined by short attention spans and fiery sentiment churned by the whitewater rush of social media. That means "Better Call Saul," having debuted in 2015, never could entirely rely upon the same level of patience from its audience that its forerunner enjoyed.

But the fact that Vince Gilligan and Peter Gould haven't let that deter them from steadily and meticulously setting each paving stone between the introduction of Odenkirk's Jimmy McGill and the rise of Saul Goodman remains the story's strongest asset.

In part I'm pointing this out as a reaction, but not necessarily a rebuttal, to a popular piece that published in The Atlantic in which the writer took issue with what he views as the show's overall tendency toward tediousness: "Frequent-depictions-of-tooth-brushing tedious," he says. "Multiseason-subplot-about-retirement-home-billing tedious. Slow-and-repetitive-commentary-on-the-human-condition tedious. I-stopped-watching-after-three-years tedious."

It makes a stronger case for consuming the greatest TV shows one episode at a time.

Only rarely do I refute someone's opinion on a show; that won't be happening here. Instead, I'll point out a part about of this viewer's observation that struck me in a "one person's trash is another treasure" kind of way, which is the fact that he landed on this notion during a catch-up binge.

"Better Call Saul" was never meant to be viewed that way.  And while that makes it Exhibit A for strengthening the headline's case – "Have We Lost Patience for Prestige TV?" – I think it makes a stronger case for consuming the greatest TV shows one episode at a time, two at most, and on a weekly basis.

Some streamers (mainly HBO Max, Disney+ and Hulu) are coming around to the benefits of slower consumption, releasing episodes of comedies and dramas weekly in single servings or sometimes in drops of two or three installments, as opposed to pushing out full seasons in one pass.

Amazon may have learned this the hard way by thrusting every episode of "The Underground Railroad" onto its platform in one fell swoop only to discover that, for all its overall magnificence, it was too hefty for the average person to swallow in a single pass.

The Peak TV era was already defined by too much choice and too little time before the pandemic whittled away at our willingness to take on the additional psychic weight of devastating fictions.

"Better Call Saul" could never be called one of those, although it has vacillated between a rolling anxiety boil and a low simmer with less frequency as the story has progressed. Arriving at its sixth and final season means we're asked to appreciate Odenkirk's character trajectory, both in terms of what leads up to his chapters with "Breaking Bad" antihero Walter White and the colorless, paranoid life at the Midwest Cinnabon coming afterward.

But it's equally worthy to grasp the extent of the perverse trickle-down effect corruption has in this world, and for some of us, that takes a pause for discussion and a hard think. Letting it sit for a week is fine by me. Even a day is enough.

Since this is about the joy of drawing out a quality show's pleasure, and in acknowledgement of our TL;DR culture, I'll confirm what this show's devoted viewers probably want to know about "Better Call Saul's" first steps to its finish: It's still the most extraordinary, riveting drama on TV, substantially because of its emphasis on showing and implying before scripting what it's thinking.

It's still the most extraordinary, riveting drama on TV.

Don't get this wrong – Odenkirk is at his funniest when Saul Goodman turns on his fast-talking flimflam. But the drama's power as a parable shows best in its wordless sequences. The premiere's opening scenes externalize this by showing the material beginning of Saul Goodman's finish, starting with a black and white cascade of ties that fade into color. This introduces a sequence showing every opulent item Jimmy's scammed for being seized, all of it set to Henry Mancini's "Days of Wine and Roses.

Cinematically viewing how many details went into the house that Saul built tells its own magnificent, potent story. But the consistent ferocity of "Better Call Saul"  has always been its performances – Odenkirk's, of course, but also and always Giancarlo Esposito's terrifyingly frigid Gus Fring, who incorporates more uncertainty and subtle fear into his performance than we saw in "Breaking Bad," when he was already the cartel's top dog. That type of noticeable evolution plays into a few characters whose survival is assured like Jonathan Banks' Mike Ehrmantraut, in whom we've seen more vulnerability and humanity in this prequel. 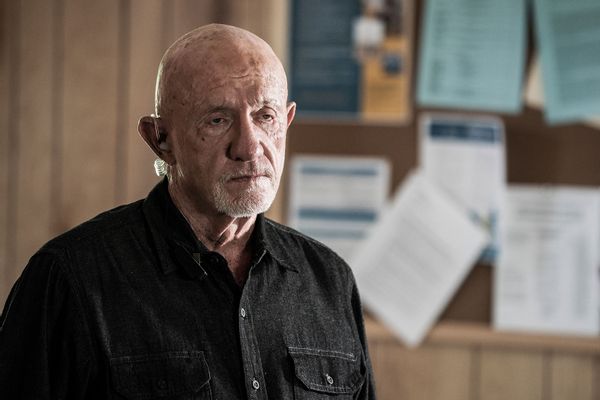 Jonathan Bands in Better Call Saul (Greg Lewis/AMC/Sony Pictures Television)Like Odenkirk's shady lawyer, the torturous question at the center of Mike's story isn't about knowing whether he lives or dies but what parts of him decay – and who he loses on his downward slide into pure criminality. The fifth season ended with Nacho (Michael Mando) on the losing end of a wager he makes with Mike, who assured his family's safety in exchange for working for Gus to bring down rival kingpin Lalo (Tony Dalton). For Jimmy/Saul that question concerns Kim Wexler (Rhea Seehorn), his constant ally and now, his wife – and increasingly, his partner in corrupt tricks to settle scores.

I've previously described this show as a tragedy that likes to hide from time to time inside of a clown suit. The sixth season affirms this, with the clown's despair and regret more frequently showing through his theatrics.

But Odenkirk is at his most moving when his character reacts to Kim's demonstrative willingness to toss ethics out the window for her own ends. In compiling our list of what we'll miss about this show, his work with Seehorn tops it. Witnessing Seehorn sink into the venal side of Kim is jolting – especially if you have walked slowly with her and the rest of the ensemble through previous seasons.

This speaks to the question of whether someone who has never seen "Better Call Saul" can catch up with the show before it ends. Sure you can. Millions of folks are discovering or re-discovering it as we speak; as of this article's writing, it is the sixth most popular TV show on Netflix.

That also says plenty of viewers are fine with gulping down episodes as fast as they can, which I get. Such is the case with many parts of life these days. Although we'd like to think more of us value slower lives, a lot of our ability to gear down relies on obtaining the accoutrements of relaxation as quickly as possible.  But I hope fewer people feel that way about the final season. Where's the joy in rushing through a good thing?

The sixth season of "Better Call Saul" premieres at 9 p.m. Monday. April 18 on AMC and AMC+. Watch a trailer for it below, via YouTube: