The "Better Call Saul" point of no return: Jimmy McGill is dead, and Saul Goodman rises 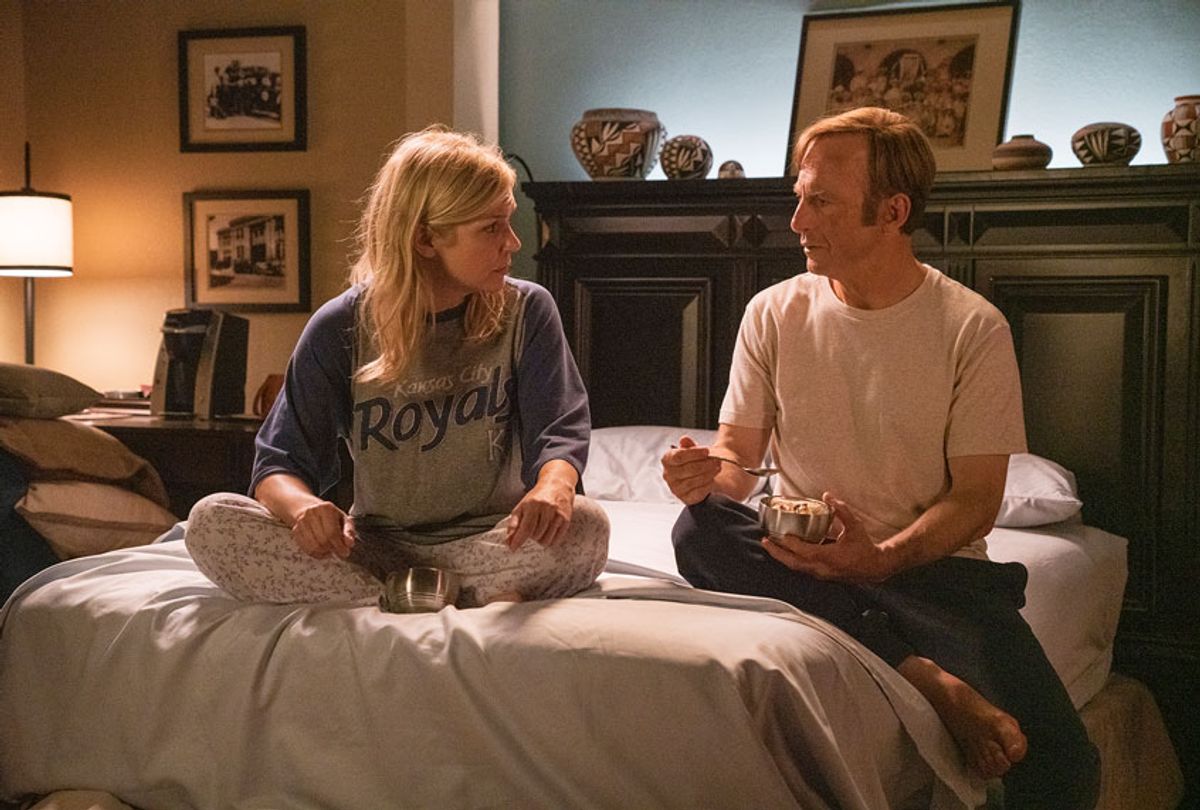 Life-altering horrors happen in the arid, open desert. Among our ecosystems, deserts may be the least forgiving; at least in the more frigid areas of the tundra a person might access water.

In the "Better Call Saul" and "Breaking Bad" universe, the desert also happens to be where bad men are made and unmade. Both series open with their protagonists facing pivotal moments in their moral development out in the middle of nowhere. Picture Walter White standing in front of his broken-down trailer in his tighty whities, ready to face his fate, his feet on stony ground and surrounded by brush.

Now picture Jimmy McGill (Bob Odenkirk) doing business as Saul Goodman, trudging through the desert. (For our purposes, we'll refer to Odenkirk's character Jimmy when he's off the clock, and Saul when he's working.)

On each of his shoulders Saul has a duffel bag heavy with cash — more than $7 million. But he's ill-prepared for the journey, even with the help of his unlikely guardian angel Mike Ehrmantraut (Jonathan Banks). He's carrying a fortune on his back, but no water, no sunblock. The desert can be ironic and cruel. At his lowest point Saul, the temporary millionaire, is forced to drink his own urine.

A few scenes before this Saul thought he was doing a simple favor for his client, the murderous kingpin known as Lalo (Tony Dalton), and acting as a so-called "Friend of the Cartel." Lalo tasks Saul with meeting up with allies in the Mexican desert (the notorious twin hitmen known as "The Cousins"), grabbing Lalo's bail money and heading back to Albuquerque. Easy enough.

Jimmy, being a gringo driving the most unassuming of cars — a beaten-down Suzuki Esteem — shouldn't have had any problems. Except, that is, for being waylaid by an opposing gang of armed men who would have killed him if not for Mike's intervention.

Jimmy stays alive but his car and his self-esteem are shot to bits in the crossfire. Mike's engine block also takes a bullet. The subsequent hike that follows nearly kills both men and is Saul Goodman's baptism by fire, his initiation into darkness. The desert is a place where people disappear, either by choice or by force. For our attorney, it's where the last vestiges of Jimmy begin to die off and Saul is fully realized as his true identity.

Two episodes later, in Monday night's fifth season's finale, the desert's evil takes the form of Lalo's wrath. And he's on the march. The crime boss has survived an assassination team that kills everyone else in his compound deep in Chihuahua, including revered and harmless elders. He realizes the inside man must be his trusted up-and-comer Nacho (Michael Mando), a lieutenant he puts up for a promotion without realizing that Nacho is also working for Gus Fring (Giancarlo Esposito), the man who orders the hit.

And Nacho never intends for any of this to happen. Lalo springs the drive into the Mexican wilderness and into his inner sanctum on Nacho in what seems to be a whim. Nacho is unaware of the hit until the team contacts him and forces him to aid their doomed mission.

Nacho wants out, and Mike assures him that Fring will release him once he's helped depose Lalo. But if you've seen "Breaking Bad" you know that Fring survives this chapter of war, as do Mike and Saul. We don't see Nacho in the series, or Lalo … or Jimmy's faithful wife Kim (Rhea Seehorn) who watches her partner's transformation with dismay and horror at first but eventually, and concerningly, with acceptance.

All we know now is that a vicious, seething Lalo is on the march, and likely to head straight for the "friend" he knows.

AMC's "Better Call Saul" begins as a character profile, enabling creators Vince Gilligan and Peter Gould and Odenkirk to examine with humor, fright and tragedy how their creation becomes the shamelessly amoral lawyer we know from Walter White's chapter. It's been a profound, gripping journey through each of its seasons, and I would even posit that the series achieves the rare feat of meeting and in some ways exceeding "Breaking Bad" in the evenness of its plot development and storytelling.

Now that Season 5 has set up the game pieces for the sixth and final run of episodes, it has become a parable of the inescapable collision of fate and choice. And this is underscored in this season's penultimate episode, "Bad Choice Road," in which Mike spells out the price for the life he and Saul have chosen. They make good choices and bad, and there's a price for each of them. But, Mike said, he makes these choices to help the people he loves, and knows that what happens to him doesn't matter as long as his loved ones are cared for.

Jimmy is not so wise. Kim is known to Lalo, and shows her mettle by standing up to him in a tense standoff in the condo Jimmy and Kim share when Lalo, doubting his lawyer's account of the desert journey, shows up unannounced with a gun. (Jimmy leaves out the part about Mike's assistance and the shoot-out, at Mike's direction; Lalo later finds his lawyer's supposedly abandoned, bullet-riddled vehicle pushed off the road in a ditch.) Instead of making her angry at Jimmy for endangering their lives, the encounter emboldens Kim.

And in a clever, sobering bookend to the Season 4 finale, Kim jokes about how she would destroy their former boss and current adversary Howard Hamlin (Patrick Fabian) only to respond to Jimmy's worried question as to whether she's kidding by firing back with his signature finger guns, pew pew!

You know, the ones he used to punctuate, It's all good, man when he wallops her with his name change.

Meaning no, she's not kidding — and worse, she's no longer solely devoted to goodness. Because, as we've seen in her own faith struggle this season, what does it mean to be a great lawyer if the only clients who can afford her, and the only bosses who want her, are bad people? And what if the only way to exact justice is to antagonize the fat cats, take their money and use it to scheme against them?

Jimmy is a man twisted by his brother Chuck's inability to forgive him for misdeeds committed in their youth and forces neither of them could control, namely their mother's preference for Jimmy despite Chuck's strivings to make her proud.

When Chuck dies and gives Jimmy a giant middle finger from beyond the grave, Jimmy takes out his rage on Howard but, more importantly, he decides to embrace the destiny Chuck painted for him in life. He marries con artistry with the legal profession, even though, as it turns out, Jimmy is quite a resourceful and smart lawyer.

Prior to this season much of the audience's interest had to do with the signposts of when Saul Goodman would manifest — when his name is first used and the context in which he uses it, the situations in which the Saul character shows up and what he symbolizes.

Now that Saul is officially on the scene, those fan-bait details matter less than the toll exacted on everyone around him as part of crossing this bridge between the character's past and his desolate future. Saul is a tainted soul who unwittingly corrodes everyone around him including, and most miserably of all, the woman he loves.

And hardworking, forthright Kim willingly breaks her moral compass; if not for him then at least because of his example. Nacho, in a parallel story, plunges deeper into the hell of cartel life in order, he hopes, to save his father, only to place him – quite unintentionally – in the crosshairs of a madman.

In the seventh episode of this fifth season, when Saul agrees to the devil's bargain Lalo offers, he believes that falling in with the drug underworld simply means easy riches with few questions asked. Now he knows better, and the audience sees this moment for what it is: the true point of no return.

And to think that this happens despite the warning Jimmy receives when the series began, another gruesome scene where he talks Tuco, a Juarez cartel sociopath, out of murdering him and two young aspiring fraudsters who cross the gangster. Jimmy negotiates the murder down to a teachable moment in which Tuco breaks one leg on each of them. The desert does not forgive.

Even here, however, Jimmy falls back on his con man skill of persuasion, sharpened by years of seeing easy marks at a distance and taking advantage his target's weaknesses. Mixing with hardened criminals who survive by omerta and the need-to-know sharing of information defeats the con man in him. This brings us to our current moment, and the beginning of the end. Jimmy McGill, con-man attorney, is now Saul Goodman, criminal attorney — as in an attorney who is also a criminal.

If we didn't know what Jesse Pinkman means by that term when he first utters it in "Breaking Bad," surely we do now.