The reason may have to do with a parasite that moves between cats, rodents, and sometimes humans 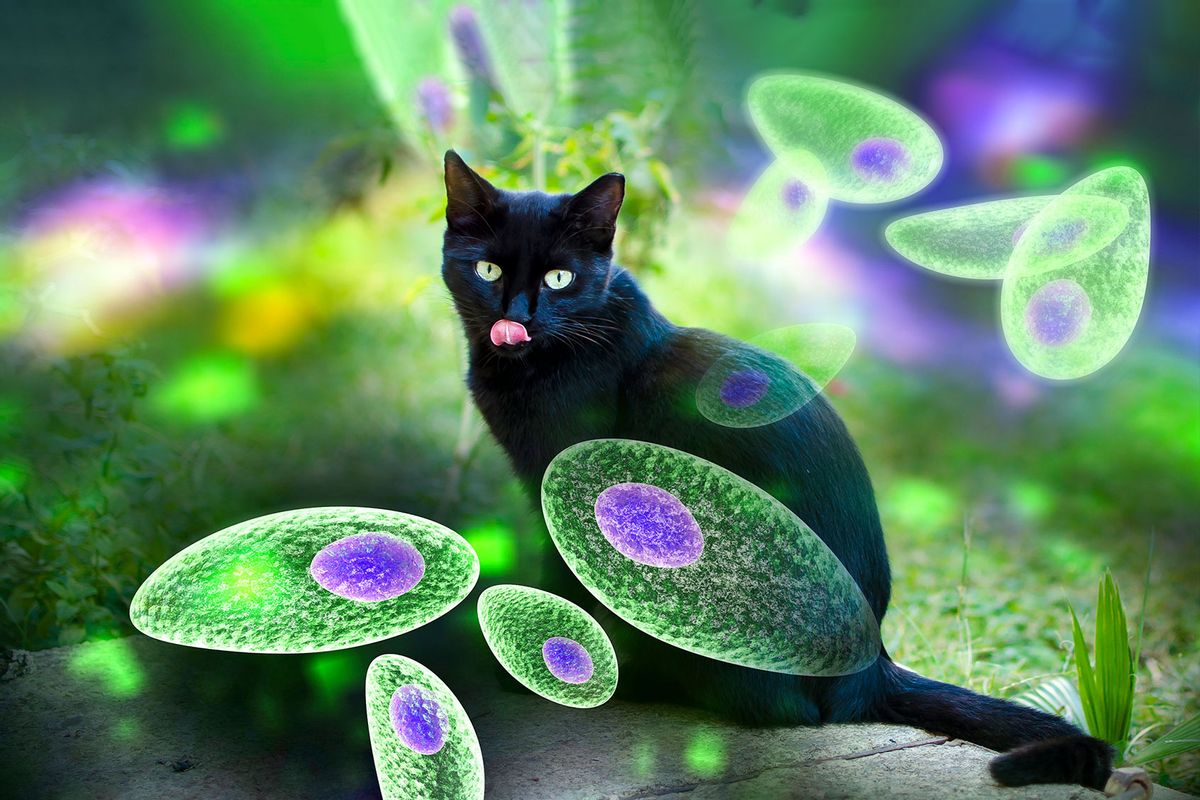 Toxoplasma gondii tachyzoites and the cat which is the definitive host of parasites, concept (Getty Images/Dr_Microbe)
--

Typically, pet ownership has positive psychological effects on children. But according to a new study, physical effects — particularly on the brain — may not always be positive.

Specifically, a new research paper finds that owning a cat as a child is linked to psychosis in adulthood — but only among men, curiously. Psychosis is a condition in which its sufferers lose touch with reality, and often hallucinate things that aren't there or see things that are not real.

"Ownership of cats in childhood has been inconsistently associated with psychosis in adulthood," the authors explained in their study, which was published in the Journal of Psychiatric Research. "Parasitic exposure, the putative mechanism of this association, may be more common with rodent-hunting cats, and its association with psychosis may depend on other environmental exposures."

In other words, male children whose families owned outdoor cats were more likely to experience psychotic episodes as adults than those who either did not own a cat or whose cats stayed indoors. The statistical difference was small, but still significant.

Why would rodent-hunting cats be more likely to cause psychotic experiences? The complicated reason may relate to a type of parasite that is found in cats and rats, and sometimes humans.

RELATED: A "talking" cat is giving scientists insight into how felines think

It's called Toxoplasma gondii (T. gondii), and it is a nasty protozoan best known for causing the disease toxoplasmosis. It is commonly found on rodents and therefore, not surprisingly, in cat feces. The parasite has a complex life cycle, and in terms of their relationship with people often begins when a cat will develop an infection after eating raw meat, rodents or wild birds. Because the parasites live in feline feces, people who make any kind of contact with the feces and then touch their own orifices can ingest the parasite themselves. From there, mental health issues can ensue.

Though the idea of a mind-altering protozoan transmitted via cats is alarming, it is not necessarily harmful: roughly 30 percent of the human population is infected with the T gondii parasite.

From feline feces, scientists believe it can enter the bodies of humans, and is suspected to be linked to the mental health problems that often arise during their adulthoods if they had cats as children. Exposure to the parasite has been previously linked to disorders like schizophrenia and other cognitive impairments. The disease toxoplasmosis itself causes symptoms including fever, fatigue, muscle ache and inflammation. It can be fatal in both people and animals with weaker immune systems, and scientists have long suspected a link between the parasite and a plethora of mental health ailments.

"These are small pieces of evidence but it's interesting to consider that there might be combinations of risk factors at play," McGill University psychiatry resident Vincent Paquin, MD, the lead author on the paper, told Medscape Medical News.

He added, "And even if the magnitude of the risk is small at the individual level, cats and Toxoplasma gondii are so present in our society that if we add up all these small potential effects then it becomes a potential public health question."

Though the idea of a mind-altering protozoan transmitted via cats is alarming, it is not necessarily harmful: roughly 30 percent of the human population is infected with the T gondii parasite. In addition, as the study noted, there were other factors associated with a higher risk of adult psychosis such as a history of smoking, past head trauma and moving houses more than three times as a child. Additionally, the study had design limitations, such as relying on self-reporting for assessing psychosis diagnoses, and other studies have yielded different conclusions on the subject. The authors themselves acknowledge that their findings will need to be replicated by other scientists before they can be considered definitive.

"If you're generally healthy, not pregnant, and have been diagnosed with toxoplasmosis, you probably won't need any treatment other than conservative management," the Mayo Clinic explains on its website about toxoplasmosis. "If you're pregnant or have lowered immunity, you may need medical management to avoid severe complications. The best approach, though, is prevention."

The study also leaves at least one big question unanswered: Why did cat ownership as a child seem to have an effect on human males, but not human females?

"One possible explanation based on the animal model literature is that the neurobiological effects of parasitic exposure may be greater with male sex," senior author and psychiatry professor Suzanne King, PhD told Medscape Medical News.

This is not the first study to draw attention to the dreaded parasite and its ability to wreak havoc through cat feces. In 2019, Salon reported on how there had been 11 Hawaiian monk seal deaths linked to the T gondii parasite. As Hawaii has a large feral cat population, feral cats' feces infected the Hawaiian monk seals with the parasite. It can be fatal in the pinnipeds, hence the large death toll.

"We have 11 that have died, eight of which are female — and that is the scariest aspect of it, because they are the contributors to increasing the population," Angela Amlia, Hawaiian Monk Seal Recovery Coordinator at NOAA Fisheries Pacific Islands Regional Office, told Salon at the time. She added that "there may have been other[s] that have died" and that "it is possible — and we don't know for certain — that it has to due with immunosuppression due to reproduction."

Read more on cats and psychology: