Bidding farewell to "Grace and Frankie": "We wanted people to cry at least at one point"

On "Salon Talks," "Friends" creator Marta Kauffman discusses how to wrap up a show and how Netflix changed the game 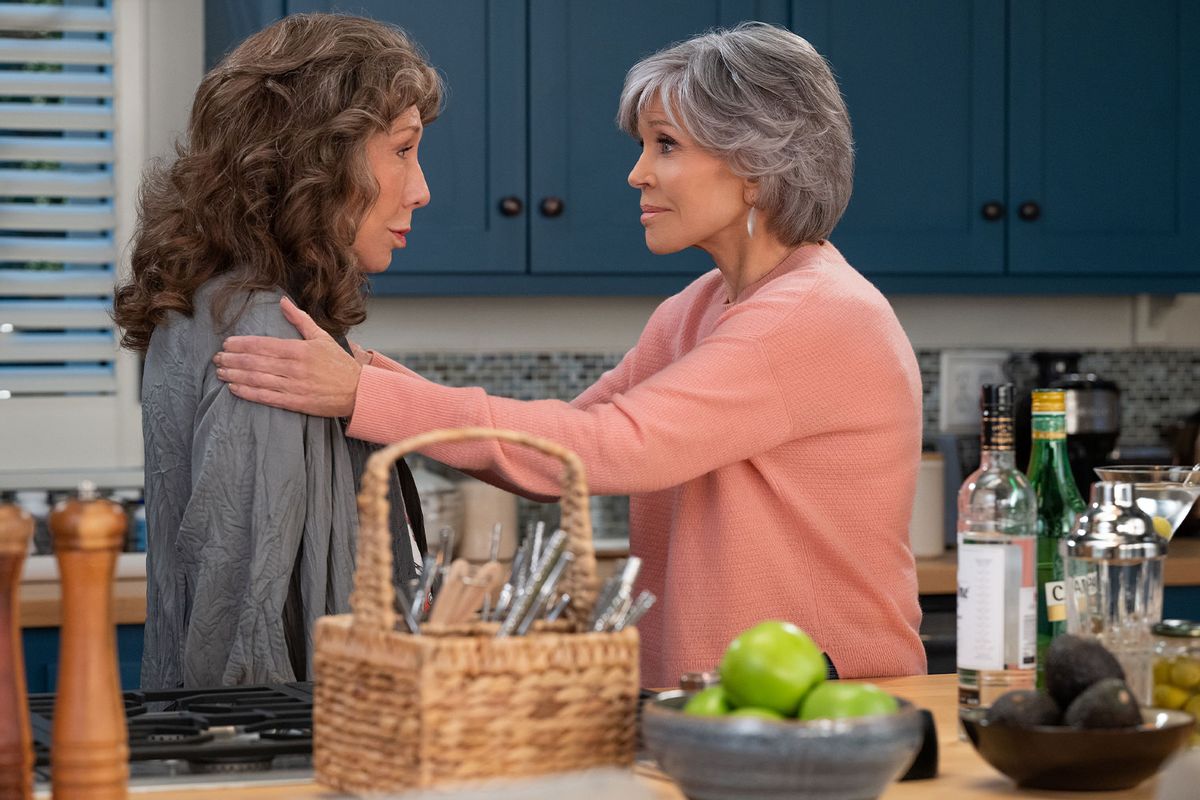 Long before she and Howard J. Morris created "Grace and Frankie," Kauffman brought us "Dream On," "Veronica's Closet" and one of the most popular comedies of our time, "Friends." That series finale holds the record as the most-watched TV episode of the aughts and the fifth-most-watched in television history. It's also one of the increasingly rare series farewells that satisfied most viewers.

That's what Kauffman wanted to do as she brought "Grace and Frankie" to a close after seven seasons, following the lessons lived and learned by Jane Fonda's Grace Hanson and Lily Tomlin's Frankie Bergstein. Together we watched these best friends discover time and again that there is no such thing as a universal standard for perfection. That's also true of series finales.

"You're never going to make everybody happy. Sorry," Kauffman told during our recent "Salon Talks" episode. "For me, I want to write a show that I would like to watch, where I would feel satisfied. I can't write for the world. We write for us, and hope that it translates."

Few TV industry creatives have an informed perspective on par with Kauffman. She was part of HBO's leap into original programming thanks to "Dream On" and kept NBC's Must-See TV banner aloft with "Friends." "Grace and Frankie" debuted in 2015, placing her at Netflix near the beginning of its original programming expansion – granting her a unique window into how the streaming service has changed since then.

"Grace and Frankie" also marks the first time that Fonda and Tomlin played leads in a TV series, which is astonishing to realize. These are two revered performers who had never been tapped to star in a show, and when it began Fonda was 77 and Tomlin, 75. That adds an extra layer of triumph to the show's multi-generational popularity in a development landscape that perennially favors youth and a male point of view.

"People aren't watching 'Grace and Frankie' just because it's about two older women. It's a comfort show."

Surprisingly, Kauffman revealed that she encountered a similar bias against the other end of the age spectrum when she and her "Dream On" co-creator David Crane were shopping around "Friends" in the 1990s. "Who's going to watch a show about a bunch of 20-somethings?" became the doubting development executives' refrain, she recalled.

"My theory is, if you have characters that you want to spend time with, that you care about, characters who you're invested in, then people will watch," she said. "People aren't watching 'Grace and Frankie' just because it's about two older women. It's a comfort show. They do it because it makes them feel good, and feel comfortable. They're inviting these friends into their homes, and people always talk about, 'Are you a Grace or a Frankie?' Clearly, these characters have resonated."

During our conversation Kauffman discusses bringing the series to a close while also explaining how the approach that Netflix and other streaming services have taken to content creation has changed. We cover this in greater depth in the full length "Salon Talks" episode, a highly recommended watch for anyone who loves "Grace and Frankie" and seeks a fuller understanding of what's happening in the streaming industry from a veteran creator's point of view.

The following interview transcript has been edited for length and clarity.

It is amazing that "Grace and Frankie" went for seven seasons and about, what, 94 episodes? That is so impressive. That makes it the longest-running original on Netflix too, right?

I've spoken to a lot of folks over the years who say, "If we get past one season, I'll feel like we hit the lottery." But why did you think that three years was going to be your limit?

I think at the time it was, "We don't know what Netflix is going to be . . . We don't know how it's going to do." But also, Netflix, their primary investment isn't in longevity of their TV series. They want to keep bringing in with new things and new things. So we didn't know.

Were you amazed by that when you first pitched them this show?

Yes. It's funny. The way it happened was, I was having lunch with the woman who was the then head of television at Skydance, and that's our studio. She said that she had heard that Jane Fonda and Lily Tomlin both wanted to do TV. I thought she meant together. I ran back to my office. I called my agent and I said, "Is it true that Jane Fonda and Lily Tomlin want to do a TV show together?" She said, "I don't know. I'll call you back." Twenty minutes later, she calls me back and she says, "They do now." We started with our two leads before we really had a solid sense of what the show was going to be.

Did they sit down with you and bounce ideas off of you? Or did you have a firm idea of what you wanted to tell with the story?

I'll tell you one story from there. We were talking about men and Cialis. Jane said, "You know, that's not the only way to help a man get an erection. There's a pump and there's a needle. There's a shot you can get in the penis." Lily Tomlin says, "You have got to get younger boyfriends."

Howard and I looked at each other and said, "That's our show right there. That's the show."

I know there was a time when this show probably could not have gotten made. Now there are so many shows, none right now that show women at this age in life, but we're seeing women over 40 and their stories more frequently.

Yes. It was obviously an under-served market. But what do you think has changed?

It's funny. I think the change is niche TV. Everybody's saying, "The audience that went to this show, we want that same kind of audience, so we have to do the same kind of show." What happened with "Grace and Frankie" is it proved to not be true, that it was watched by multiple generations, and not only women. I think that was a surprise to them.

But I think that's one of the issues, is everybody's being pushed into this tiny little box. . . . There have always been rules, even for the networks as well.

. . . The business itself, the industry is becoming more and more corporate. There are more and more guidelines that are being sent from above. It makes it harder and harder to sell.

It's interesting that you bring up that it makes it harder to sell. But the fact that it is more corporate, I would think that would work against a show like "Grace and Frankie." Did it make it particularly tough to sell?

Well, honestly, it wasn't when we started. We did a lot of years with the Netflix that was just starting to do shows. We got incredible support. We always got really fantastic notes from them that kept us true to our vision. They were fantastic. When things started to change at Netflix, we were already established. We were not their problem child. In that sense, we haven't experienced it. But it's more in a lot of the other places, that algorithms and corporations are changing the craft and the storytelling.

Do you feel like streaming has had an impact, either positively or negatively, on the quality of television shows? I know that's tough to answer as a creator. But you're right in it, so I'm just curious to hear from you.

Honestly, I don't think it's had a negative impact. It's a very interesting process, at least, it was when we did "Grace and Frankie," where you write the first episode, and then you go in and start shooting your 13. As opposed to a lot of other models, where you do a pilot, they test the pilot, they take the pilot apart, but you learn a lot from that process, so when you start the series, you've got all this information.

With streaming, at least for us at Netflix, we had to learn as we went along. You're right in production.You're writing episodes that are six episodes down the line. We really had to learn on our feet how to walk the line between comedy and drama.

"The bottom line, core of the show is you can start your life over at any point."

Let's talk specifically about this final season. You had the challenge of the pandemic halting production.

Yes. It took us almost two years to shoot one episode.

We stopped in the middle of an episode.

How did that impact coming back to that episode? Things physically happen to people over two years.

I know. We had one actor, and we're shooting it, and we realize as we're shooting it, after the pandemic, "He didn't have a beard two years ago." No one knew. We're watching it, and it was just a sudden thing. We're like, "Oh, s**t. It's too late. We can't change it now." We had to use special effects to get rid of his beard.

Yeah, stuff like that did happen. People changed. They lose weight, they gain weight, their hair is different, and everybody's older. Including me.

Going into the finale season, what were the stories that you wanted to tell about bringing these characters' lives to a close? And what were some of the things that you wanted to avoid, specifically? Not just with Grace and Frankie, but also with Sam Waterston's Sol, and with Martin Sheen's Robert?

The bottom line, core of the show is you can start your life over at any point. We knew that we wanted Grace and Frankie to be OK. We wanted everybody to be OK. We wanted people to feel satisfied and happy for the characters. It's a comedy. We weren't looking to do a musical, or make something completely different. We wanted to stay true to the show, but find ways to finish our characters that seemed satisfying. We wanted to avoid any dramatic pitfalls that would feel like it put the brakes on the show if we did anything too sad or too heartbreaking. But we did know that we wanted people to cry at least at one point. That, we wanted.

Did you know the point that you were going for the tears, or you're just saying overall?

One of the things that I read is that you knew how you wanted the show to end for quite some time.

Well, we knew certain things. We knew what we wanted the last image to be. We knew what we wanted the last line to be. We had no idea how we were going to get there.  We were starting to break the last two episodes right before the pandemic, and it was really difficult. Probably the hardest two episodes we've ever done to write, to make them feel like, "Yeah, this is where we're supposed to land. This feels right."

You've had seven seasons, you have said before that this was Netflix's choice to end the series, not necessarily yours. Do you feel like you've told all the stories that you wanted to tell?

All episodes of "Grace and Frankie" are now streaming on Netflix.