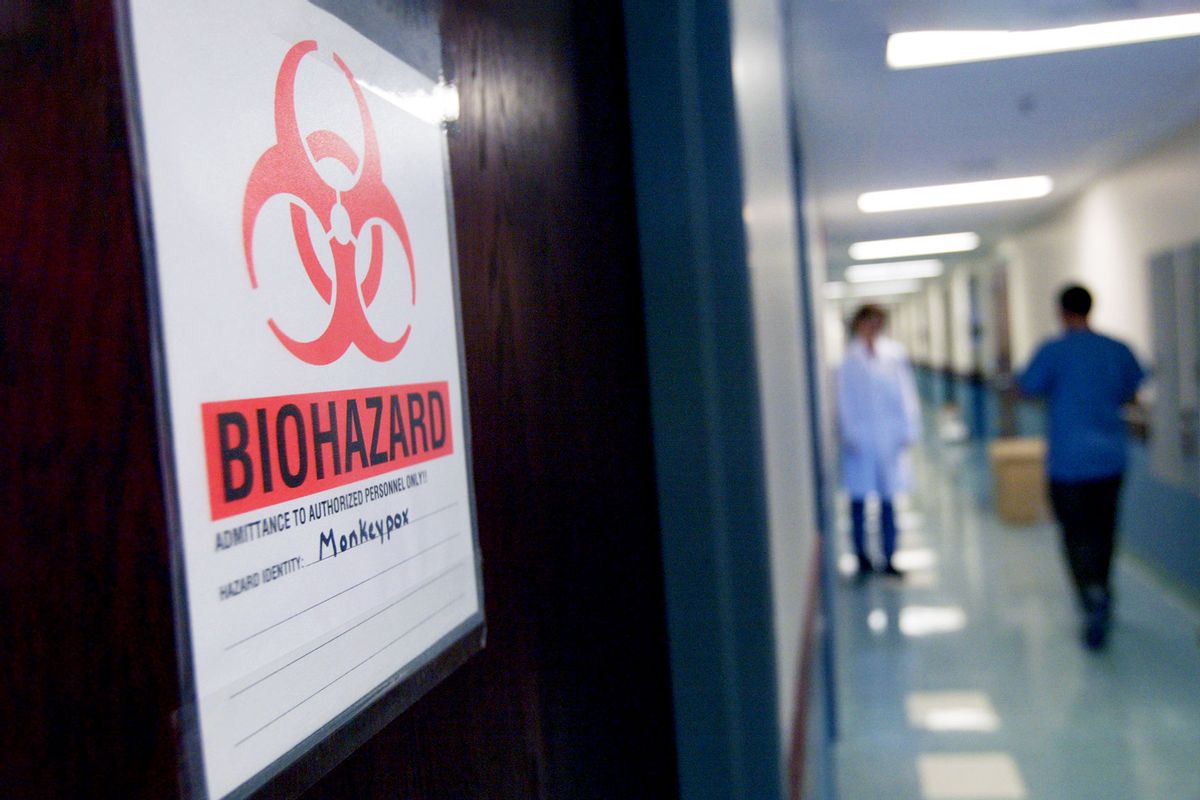 At the University of Minnesota's Veterinary Diagnostic Laboratory, the door to the lab where the first step is taken in the testing of samples for the monkeypox virus has a warning sign to let others know not to enter. (JUDY GRIESEDIECK/Star Tribune via Getty Images)
--

If there is one point on which most Americans will almost certainly agree, it is that we have had more than our fill of pandemics. Though COVID-19 was the first pandemic in the U.S. in about a hundred years, the nation's history is littered with examples of pandemics and epidemics long before COVID-19: A 1793 yellow fever outbreak that forced President George Washington to flee Philadelphia and a 1918 influenza pandemic that kicked the United States while it was still down from World War I are just two of the most prominent examples.

Yet not all pandemics — or epidemics, even — are the same. That's why public health officials strike a balance between keeping an eye on potential outbreaks and avoiding alarmist language. This is the situation Americans now face with monkeypox: According to the Centers for Disease Control and Prevention (CDC), the exotic-sounding ailment can cause symptoms like painful rashes that can appear all over your body, swollen lymph nodes, muscle aches, backaches, headaches, fever, fatigue and chills. Eventually lesions form and progress through a number of stages before falling off. Most people will recover within two to four weeks after developing symptoms, although it can be fatal for as many as one out of 10 people. Current data from this strain suggests a 3.6% fatality rate, according to the European Centre for Disease Prevention and Control.

And, as of Wednesday, it is confirmed that a man in the United States who recently visited Canada was infected with monkeypox.

RELATED: How the Philadelphia pandemic of 1793 foreshadowed the social problems of the COVID-19 era

Before you prepare for another lockdown, however, bear in mind that Massachusetts' health department has issued a public statement explaining that the case "poses no risk to the public," although they add that the public should familiarize themselves with monkeypox symptoms.

Notably, this is also not the first time that monkeypox has reached America's shores; 47 people in six states had confirmed or probable cases in 2003. Usually Americans who fear monkeypox could take comfort in the fact that the disease originates in West Africa, where it is endemic, and is therefore more likely to have infected individuals who visited that region of the world.

Yet experts are now concerned because they are seeing monkeypox cases among people who did not travel to Africa, which was once highly unusual. Infections have been reported throughout Europe: Italy, Portugal, Spain, the United Kingdom, Sweden. Canadian authorities believe there may be a cluster of outbreaks in Montreal. All of the patients so far have been men who had sex with other men, yet it is unclear whether the disease can be spread through sex. Traditionally humans have been known to catch monkeypox either through respiratory transmission (e.g.,, an infected person sneezes or coughs on someone else) or by being exposed to an infected animals such as by eating its meat or getting bitten.

"By nature, sexual activity involves intimate contact, which one would expect to increase the likelihood of transmission, whatever a person's sexual orientation and irrespective of the mode of transmission," Michael Skinner, a virologist at Imperial College London, told ABC News. The United Kingdom Health Security Agency (UKHSA) summed up the scientific concerns about the new wave of monkeypox outbreaks through a series of tweets.

"The high proportion of cases in the current outbreak in England that are gay or bisexual (4/7, 57%) is highly suggestive of spread in sexual networks," tweeted UKHSA epidemiologist Mateo Prochazka. "This is further suggested by the fact that common contacts have been identified for only 2 of the 4 latest cases."

Prochazka later added, "More to come and lots of work going on, especially focused on rapidly protecting the health of people [and] health care workers, implementing a response working closely with sexual health services, as well as tackling discourses that reinforce inequalities and stigma."

American health officials already had their eye on monkeypox — and have made it clear that, while there is certainly no reason to fear another COVID-19 pandemic, it could still infect many Americans and hurt a lot of people in the process.

"Given that we have seen now confirmed cases out of Portugal, suspected cases out of Spain, we're seeing this expansion of confirmed and suspect cases globally, we have a sense that no one has their arms around this to know how large and expansive it might be," Jennifer McQuiston, deputy director of the CDC's division of high consequence pathogens and pathology, told STAT News. "And given how much travel there is between the United States and Europe, I am very confident we're going to see cases in the United States."

For more Salon articles on diseases: