"Saturday Night Live" will be trash without Aidy Bryant 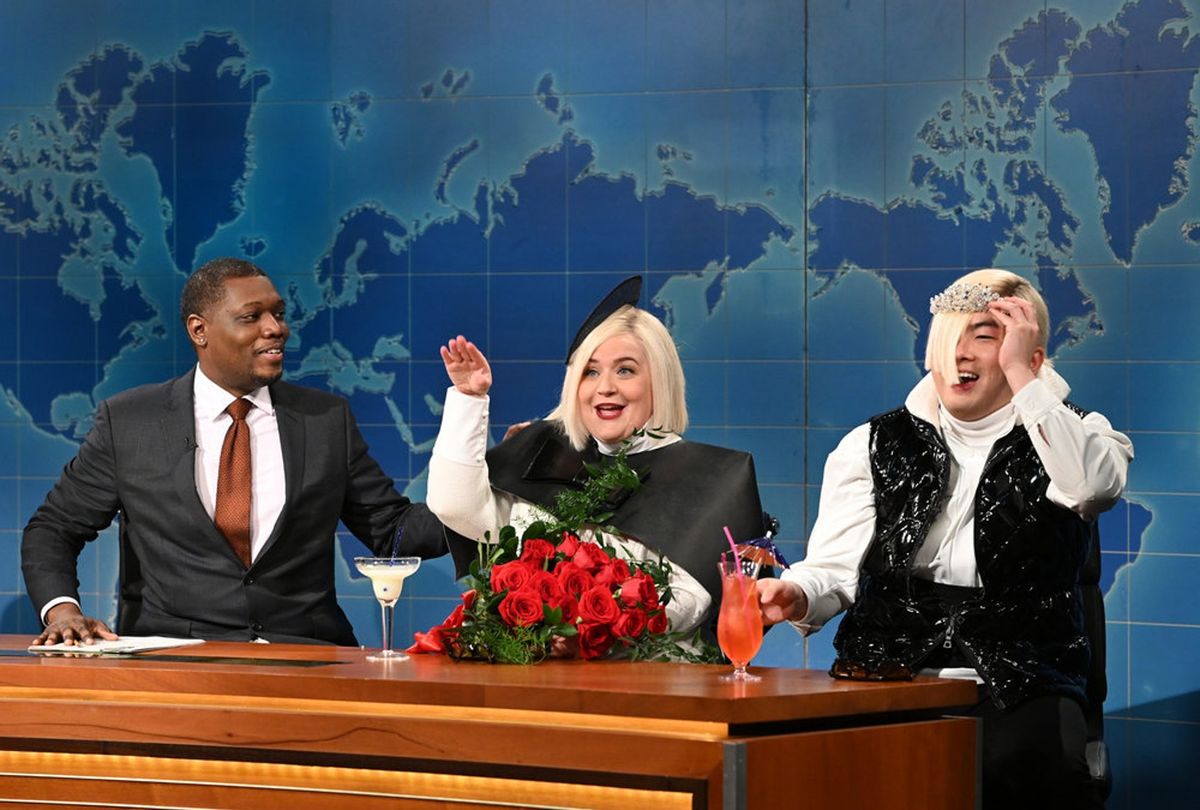 Anchor Michael Che, with Aidy Bryant and Bowen Yang as Trend Forecasters during SNL Weekend Update on Saturday, May 21, 2022 (Will Heath/NBC)
--

While there have been rumblings for years now of Davidson's desire to part with the show that, along with his dating history, made him a household name; Bryant and McKinnon came as a surprise. Mooney, who joined "SNL" in 2013, remained somewhat in the background for the finale, appearing alongside Bryant and McKinnon in a closing sketch about grey adult ponytails, which is either an indicator of his decision to allow more obvious stars to shine, or further proof that "SNL" is notorious for playing favorites. Host Lyonne, star of the current Netflix series "Russian Doll," also seemed to bow to Bryant, McKinnon and Davidson, allowing them their big night in a setting that would otherwise likely be overtaken by Lyonne's big personality. Out of all of the take-aways from the finale, however, one thing is certain. "Saturday Night Live" is going to be pure trash without Aidy Bryant.

Bryant, originally from Arizona, was a member of Chicago's Second City Touring Company prior to joining "SNL" in 2012. Once there her talent led to her jumping rank quickly her second season, similar to friend and castmate Bowen Yang who went from being a writer for "SNL" in 2018 to being promoted to part of the main cast just prior to the start of season 47.

Only 25 when she joined the show, Bryant stole every sketch she was in. Even if she was only intended to be a background player, Bryant's energy, vocal delivery, and perfect timing made her impossible to look away from; unlike Davidson who always kinda looked like he was doing someone a favor by being there, exhibiting the energy of a guy doing a TikTok bit at the request of his girlfriend.

In Bryant's curtain call sketch, performed alongside Yang, the two went wild as influencers reporting on what's currently hot, or not, culturally.

"Naval orange, go to bed, b***h!" Bryant and Yang yell in unison. "What's next, honeydew with c-section scars?!" Bryant asks. The kind of perfectly odd and funny material signature to Bryant that's kept Etsy t-shirt screenprinters in business for years. What will they put on shirts and stickers now that she's off the show? Lines from old "Seinfeld" episodes? Give me a break.

After leading three seasons of her fantastic Hulu series "Shrill," as well as making notable appearances in other shows like "Girls," "Portlandia," and "Unbreakable Kimmy Schmidt," there are surely big things ahead for Bryant, but that doesn't mean it won't sting to not have her to look forward to every week on "SNL."

McKinnon, who embraced Bryant and shed tears with her during the show's credits, said her goodbyes early during the finale's cold open. In a final appearance as beloved character Colleen Rafferty, she unraveled one last hilarious alien abduction story before walking onto a spaceship to leave with them forever.

"I always kind of felt like an alien on this planet anyway,"  McKinnon said in character before tearing up and turning away.

"Saturday Night Live" has been on air since 1975 and after all of their 47 seasons only a handful of cast members truly stood out. You've got the heavy hitters from the early seasons like Gilda Radner, Bill Murray, John Belushi, Jane Curtin and Laraine Newman. And then you've got the greats from more recent years such as Tina Fey, Amy Poehler, Maya Rudolph and Kristen Wiig. McKinnon and Bryant are now forever cemented in that "glory days" "SNL" bubble. With them gone, especially Bryant, it's hard to not feel like that bubble has irreparably popped.