In Hulu's adaptation of Sally Rooney's novel, Frances' menstrual pain is a key problem tied to her relationships 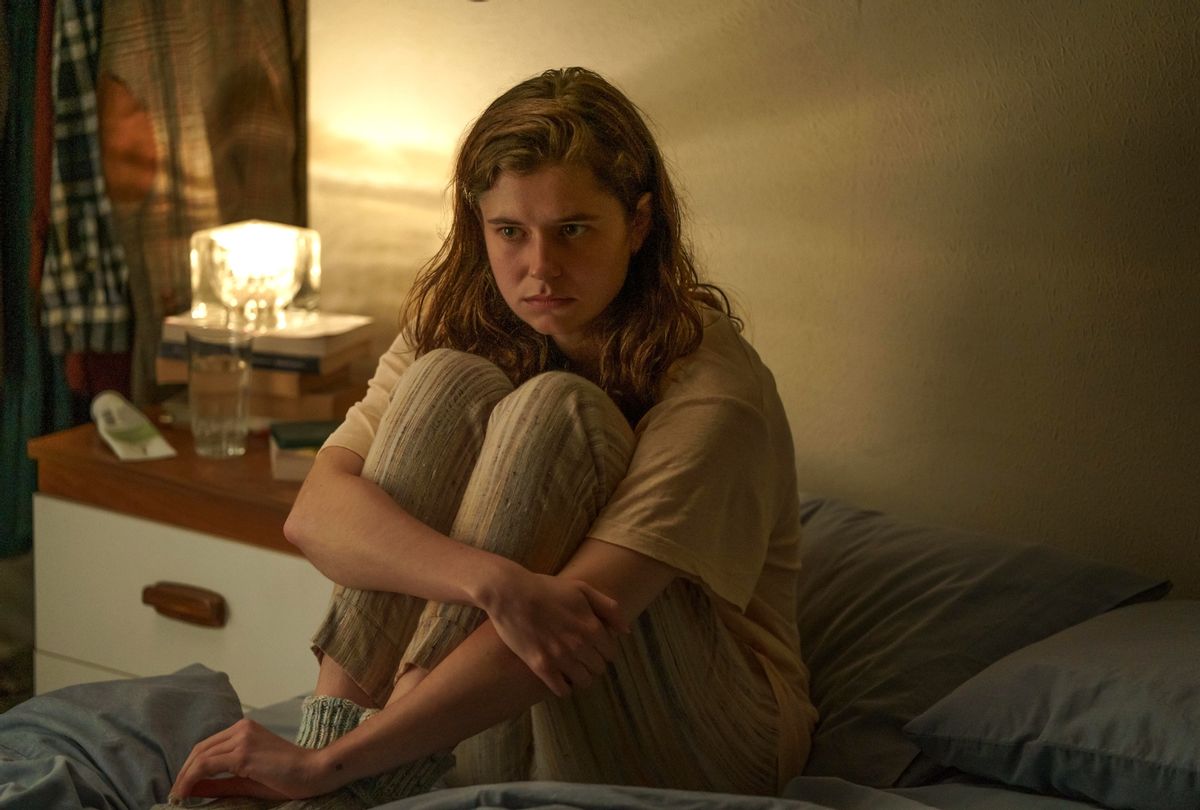 Alison Oliver as Frances in "Conversations With Friends" (Enda Bowe/Hulu)
--

Near the end of the first episode of "Conversations with Friends," we see Frances (Alison Oliver), the main character, curled into the fetal position on the bathroom floor with a sheet of painkillers nearby. When Frances' best friend Bobbi (Sasha Lane) finds her like this, she remarks: "You suffer." Frances does.

The series goes to great lengths to show the extent to which Frances' period pain determines the course of her friendships and romances.

The new Hulu adaptation of Sally Rooney's 2017 novel is startling in its unflinching portrayal of the specific, mundane agony of menstrual pain. This early scene of Frances' misery establishes a pattern that the rest of the series plays out: this particular wretched night passes, but the thing about menstrual pain is that it's only ever a matter of time until it's back. Frances' periods mark time across the 12 episodes, measuring intervals underneath the flurry of going on holiday, resuming the school term, breaking up, making up. Her pain is brutal and regular, breathtaking and predictable, devastating and perfectly ordinary.

"Conversations with Friends" is not primarily about conversation, nor friends. It is about female pain. This is not to say that pain is inevitably more important than either conversation or friendship. But the series goes to great lengths to show the extent to which Frances' period pain determines the course of her friendships and romances.

Ostensibly, the plot follows the ménage-à-quatre between Frances; her best friend and former lover Bobbi (Sasha Lane); their new friend Melissa (Jemima Kirke), a glamorous 30-something writer; and Melissa's husband Nick (Joe Alwyn), a shy, peripherally famous actor. Frances and Nick fall into an intense affair, while Bobbi and Melissa are drawn to each other. The two college students theorize everything; their wide-ranging conversations take on the ambitious task of deconstructing conventional social categories and relationship schemas — the wife, the mistress, the friend, the older man, etc. Through them, the series asks: What happens when you think outside these typecast roles? What relationships are possible when you let go of these tropes?

The preliminary answer is: You might find yourself around the dinner table with your best friend/ex-girlfriend/current roommate, your boyfriend, and his wife. This polyamorous intrigue occupies the attention of most of the series' critics, but in addition to the roles of ex-girlfriend, other woman, and younger mistress, Frances fits the mold of another stock character: the suffering woman.

Leslie Jamison has written brilliantly about this trope and its perilous balance of accuracy and fantasy. The wounded woman figure is iconic, embedded in cultural discourse from Greek mythology to the Virgin Mary to contemporary pop music. "We may have turned the wounded woman into a kind of goddess, romanticized her illness and idealized her suffering," Jamison writes. But, she continues, "that doesn't mean she doesn't happen" — we can critique how she's been idealized, but that in itself doesn't make her pain less real.

The series, like Rooney's novel, explicitly threads together Frances' menstrual pain with her romantic distress. "Female pain" as it is culturally construed supposedly encompasses both the difficulty of falling in love with a married man and the experience of being wracked by cramps on a monthly basis. As Jamison puts it, the ubiquity of this trope suggests the possibility that "being a woman requires being in pain, that pain is the unending glue and prerequisite of female consciousness." Though Frances works hard to hide her obliterating menstrual agony from Nick and Bobbi, her pain thrusts her into a trope that shapes the terms by which she can relate to others. 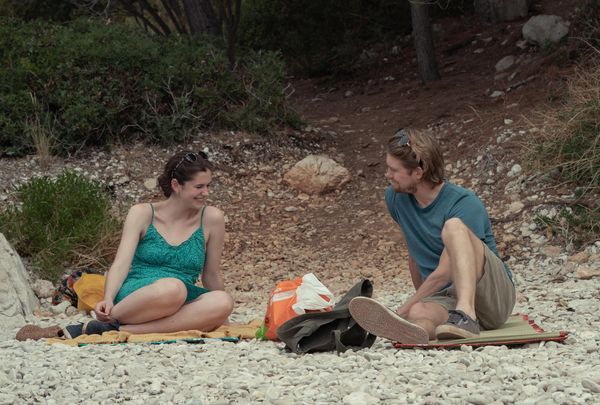 Alison Oliver as Frances and Joe Alywin as Nick in "Conversations With Friends" (Enda Bowe/Hulu)"Conversations with Friends" explores this idea of an integral link between feminine sexuality and misery. Repeatedly, we see Frances in bed, gasping with the pain of her cramps as she reads a text from Nick, typing out and deleting a reply. In Episode 6, Frances' period arrives immediately after a blissful interval with Nick in Croatia. Back home, the camera lingers on her blood-stained, wadded-up jeans on the bathroom floor. This time, the pain is so intense that she goes to the hospital, fearing a miscarriage; although that fear proves false, it floats the spectral explanation that Frances's suffering is the direct result of the affair.

"Is it just my period, or . . . ?" Frances asks the gynecologist in the hospital after the harrowing miscarriage scare. This question contains several others: Is this normal? Am I supposed to hurt this much? Do all women feel like this, or is something really wrong?

"Have you heard of endometriosis, Frances?" her doctor asks once her ultrasound results have come back. The medical explanation initially serves to shut down any speculations about direct causality, or any attempt to interpret Frances' pain as some cosmic punishment for violating the norms of heterosexual monogamy. But, at the same time, the diagnosis itself can't resolve the ineffable illogic of the experience of pain itself. Frances has a name for her condition, but she still suffers. Establishing Frances' menstrual pain as the necessary counterpoint to the various interpersonal dramas, the series insists that we understand her pain at once embodied and laden with symbolism. These are not mutually exclusive.

Through Frances, "Conversations with Friends" probes the trope of the suffering woman, exploring its limits as well as the intimacies it makes possible. Consider the scene in which Nick finally witnesses her suffering directly, tipped off by Bobbi about a particularly bad episode since Frances cannot bring herself to confide in him on her own. Nick enters her bedroom and sees a perfect tableau of feminine fragility: Frances, on the bed, legs drawn up, hair loose, weary, shy. "I was worried about you," he said. "Are you in pain?" She answers indirectly, almost sheepishly: "It's nearly gone now."

In this scene, Nick seems drawn to her pain like a moth to light — this is a vulnerable Frances, not the opaque, sharp-tongued woman whose silence so often disturbs and intimidates him. It's only now, when he sees her body in pain for the first time, that he confesses his feelings: "I love you, Frances. I should have said that earlier, but I didn't know if you wanted to hear it or not." Now, though, he knows that she does; her pain has made her transparent to him. A beatific smile breaks across her face.

RELATED: The pain gap: Women (still) aren't taken seriously by doctors — and it's killing us

"Let's just be happy from now on," Nick says, wrapping her up in a blanket, caressing her cheek. Pain prompts intimacy — this care is precisely what Frances craved but could not bring herself to ask for outright. Her pain solicits his love; when he offers his affection and concern, her suffering becomes justified, even redeemed. This is the logic within which the Woman in Pain trope operates. 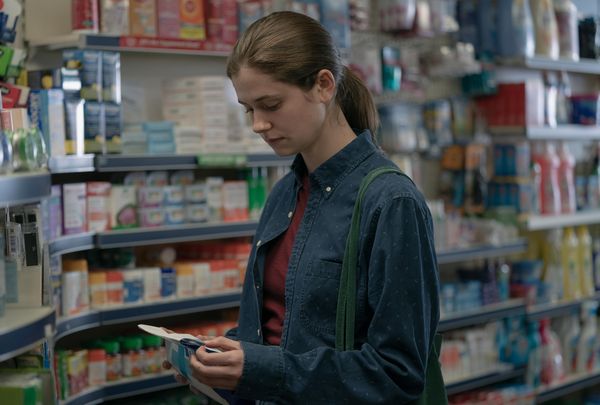 Alison Oliver as Frances in "Conversations With Friends" (Enda Bowe/Hulu)That Nick's declaration of love is enabled by her suffering does not necessarily undermine its authenticity, but it does require us to understand the Woman in Pain as a trope of sexual desire, much like "the older man," "the other woman," "the ex-girlfriend." In the final moments of the series, Nick asks why she didn't tell him about her diagnosis sooner, to which she replies: "I think I was worried that you would treat me like a sick person, and I didn't want that."

"Sick person" is an identity category Frances finds herself uneasily inhabiting, much like "younger mistress" or "child of a broken home." The problem of Frances' pain is the core preoccupation of "Conversations with Friends": how can I exist as a woman in pain, a "sick person," without being read as needy, weak, desperate? How can I share my pain with others without reducing it to relational currency, a token to garner sympathy or affection, a shortcut to accessing intimacy or care that otherwise seems impossible? Outside of the familiar tropes and stock roles, what other conversations could we have about pain?

"Conversations with Friends" is currently streaming on Hulu. Watch a trailer for it, via YouTube:

Ann Marie Jakubowski is a writer and a PhD candidate in English at Washington University in St. Louis. Follow her on Twitter @AMJakubowski