With a stellar new album, "The Tipping Point," and a tour, the band is deserving of this honor 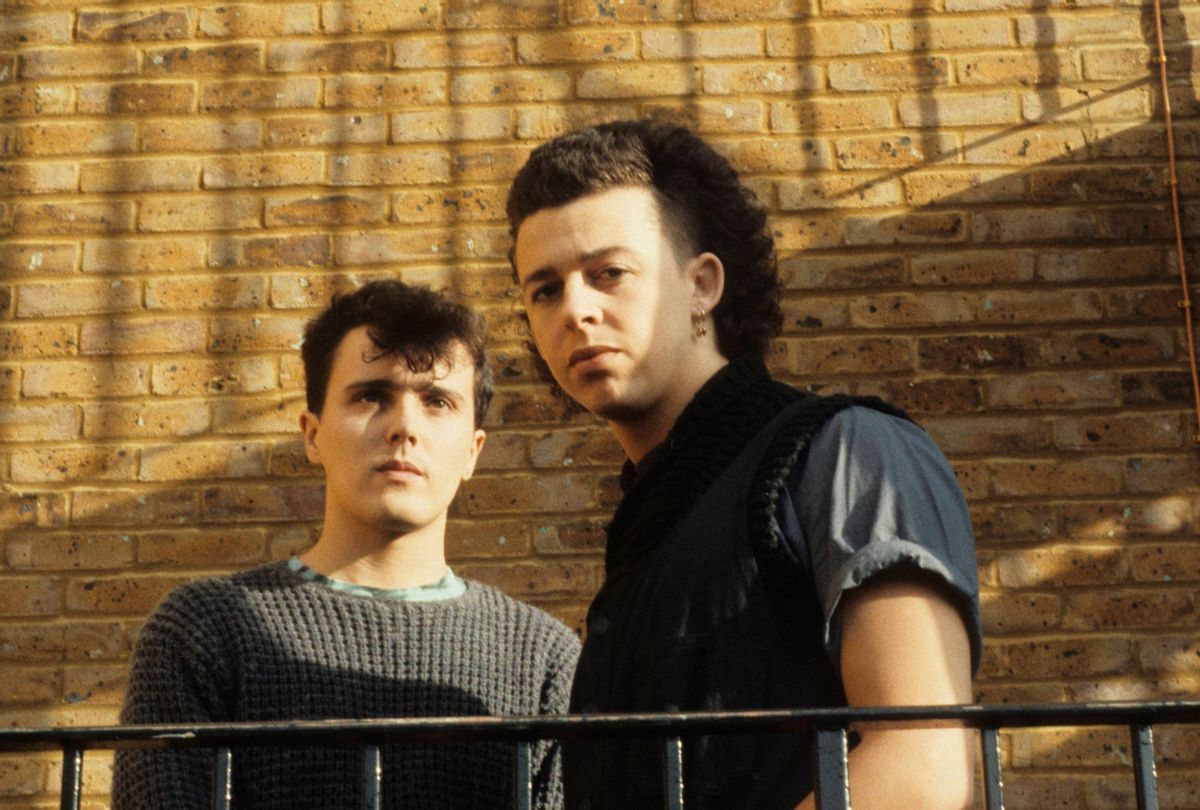 Curt Smith and Roland Orzabal of Tears for Fears, circa 1984 (Peter Noble/Redferns)
--

Last week, Tears for Fears kicked off a North American tour with openers Garbage. The British band was in fine form from the start, with co-founders Roland Orzabal and Curt Smith spinning through a setlist full of hits that showed off their range. "Shout" emerged as a prog-inflected slow burn; "Change" was a sizzling dance break; and the "Head Over Heels" was as majestic as a royal ceremony. For good measure, the setlist included deeper cuts (including "Suffer the Children") and Tears for Fears songs released when Smith wasn't in the band, namely 1993's post-psychedelic cascade "Break It Down Again."

The tour is pegged to Tears For Fears' latest album, 2022's "The Tipping Point," a dense album shaped by personal, social and cultural earthquakes. Atmospheric synths, warm electronic production, skyscraping chorus hooks, and keening lead vocals and harmonies abound, led by the stunning "Rivers of Mercy" and the turbulent title track. Sacha Skarbek, who co-wrote James Blunt's "You're Beautiful" and songs for Adele and Jason Mraz, adds an aggressive touch on the electro-prog standout "My Demons," while long-time Tears for Fears band member/songwriter collaborator Charlton Pettus adds flourishes throughout, tying together the contributions from Orzabal and Smith.

"The Tipping Point" has subtle links to past Tears for Fears eras. The album's moody synth textures and introspection certain point to 1983's "The Hurting," and its arrangements are a piece with the ambitious pop panoramas of 1985's "Songs From the Big Chair" and 1989's "The Seeds of Love." However, the dramatic dynamics of certain songs point to the Smith-less 1995 Tears for Fears album "Raoul and the Kings of Spain," while more electronic-heavy moments even echo Orzabal's 2001 solo album "Tomcats Screaming Outside."

RELATED: Tears for Fears' new greatest hits album is a hello – and a farewell

With all that being said, "The Tipping Point" emphasizes the group's singularity. The songs are immediately recognizable as being by Tears For Fears, largely due to Orzabal's rich baritone and Smith's empathetic croon. But it's difficult to pinpoint the album's antecedents and the band's influences. That's a hallmark of Tears for Fears' entire catalog; they've never made the same album twice, and each LP has its own sonic contours and approach. What they perhaps lack in quantity — "The Tipping Point" is the band's first album since 2004 — they more than make up for with quality. Tears for Fears sound only like themselves.

Despite this sterling track record for uniqueness, Tears for Fears has never been nominated for the Rock & Roll Hall of Fame. Curiously, the band also isn't often mentioned in conversations focused on overlooked or snubbed artists, even though they've been eligible since 2007. But with the Rock Hall's concerted push toward inducting bands that revolutionized the 1980s — and then kept on influencing subsequent generations — it's overdue for Tears for Fears to be in the potential inductee mix.

"The Hurting" especially continues to resonate with younger generations, judging by the abundance of TikTok videos using songs from the album as a backdrop.

Criteria for induction includes influence, and it's safe to say Tears For Fears have that in spades. Smith and Orzabal were childhood friends who grew up in Bath and played together in a two-tone-ska-inspired Graduate prior to forming Tears for Fears. Their 1983 debut, "The Hurting," is muted-tones synth-pop that topped the charts in the UK and spawned three Top 5 singles. The multiplatinum "Songs from the Big Chair," meanwhile, sold better in America, thanks to two No. 1 hits, "Shout" and "Everybody Wants to Rule the World." The ambitious "Seeds of Love," meanwhile, was a success in both places, closing out the decade with splashes of colorful, dense psychedelic rock.

Like many of their '80s peers, Tears for Fears weathered lineup and label changes after their imperial phase. However, the duo weathered this personal and creative turbulence better than most. They continued to tour, honing a live show that helped their songs evolve and expand in scope while staying fresh and modern. Tears for Fears' songs aren't crystallized in amber.

RELATED: From the Beatles' influence to personal strife, revisiting Tears for Fears' "Seeds of Love"

However, "The Hurting" especially continues to resonate with younger generations, judging by the abundance of TikTok videos using songs from the album as a backdrop. Part of this enduring adoration stems from the music, of course; the moody, intimate production and keyboard textures are similar to the approach of many modern bands. "The Hurting" doesn't necessarily sound like it comes from 1983.

Today, vulnerability is valuable pop currency; Tears for Fears created a blueprint for that nearly 40 years ago.

Lyrically, the LP was also ahead of its time in the way it centered emotional honesty and adolescent confusion, with the kind of directness and sincerity not heard on many '80s new wave albums. Today, vulnerability is valuable pop currency; Tears for Fears created a blueprint for that nearly 40 years ago.

"We wrote and made 'The Hurting' when we were still adolescents," Orzabal told me earlier this year. "We were struggling in that passage from childhood to adulthood, leaving your parents behind and becoming more self-sufficient, becoming an individual. That's a universal period of turmoil." Added Smith: "People that are around the age that we were when we made those records and wrote those records certainly are going to relate to them. They're going through the same things now that we were then." 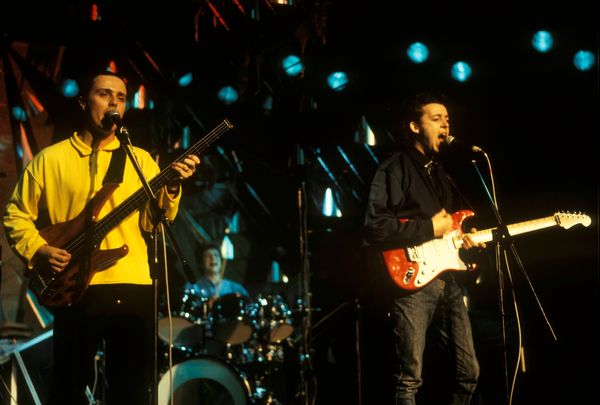 Curt Smith and Roland Orzabal of Tears for Fears performing, circa 1985 (David Redfern/Redferns)The band's songs have become rich source material for rap, hip-hop and pop samples. Most notably, Kanye West sampled "Memories Fade" on his 2008 song "Coldest Winter," while The Weeknd updated the shuffling riff of "Pale Shelter" on 2016's "Secrets." The propulsive "Shout," meanwhile, has been incorporated by Busta Rhymes, Ghostface Killah and Kirk Franklin. Tracking down other samples and interpolations is a challenge, as there are simply so many.

Tears for Fears covers also abound: The hard rock band Disturbed tackled "Shout," while Miley Cyrus crooned elements of "Everybody Wants to Rule the World" on a remix of West's "Black Skinhead. Perhaps the most famous Tears for Fears cover is a spare, spectral version of "Mad World" by Gary Jules and Michael Andrews that appeared in 2001's "Donnie Darko." Jules and Andrews tap into the song's despair ("I find it kind of funny/I find it kind of sad/That dreams in which I'm dying are the best I've ever had") and imbue these lyrics with gravitas and reverence. Such dark moods can be difficult to express or feel taboo to say out loud; "Mad World" does the heavy lifting and provides catharsis.

MTV-era bands with keyboards aren't necessarily treated with the same respect as, say, guitar-bass-drum rock bands from the 1960s.

This cover most of all has kept Tears for Fears in the pop culture conversation even when the band was dormant. It reached No. 1 in the UK in 2003, while American Idol contestant-turned-Queen frontman Adam Lambert also did a somber version of it. The song also surfaced in Australia in 2020 thanks to a well-received "Masked Singer" performance.

In addition to extending Tears for Fears' relevance, these placements and covers have helped establish credibility for 1980s-era songwriters. Although this presumption has been disproven many (many) times, MTV-era bands with keyboards aren't necessarily treated with the same respect as, say, guitar-bass-drum rock bands from the 1960s. That's partly because many of these new wave acts appealed to teenage girls — a group whose tastes are routinely dismissed or considered less serious or worth examining — or the presence of modern synthesizers was like Kryptonite to rock purists.

But hearing "Mad World" and other Tears for Fears songs in different contexts illuminates the music's sturdy bones. Tears for Fears tapped into primal feelings of joy, desperation, yearning and optimism. Regardless of the sonic dressing, these universal emotions ring true.

In recent years, the Rock Hall has begun to recognize the impact of (for lack of better terms) the post-punk, synth-pop and new wave artists that shook up music in the 1980s — the artists that built on the punk foundation of Blondie, Sex Pistols and Talking Heads. That includes Depeche Mode, The Cure, The Go-Go's and now 2022 inductees Duran Duran and Eurythmics. (Nine Inch Nails, who started touring and recording at the very end of the '80s, could arguably qualify.)

Tears for Fears certainly fit right in on a retro playlist featuring those acts, and have a comparable musical impact and loyal fanbase. But apart from Eurythmics, all of those recent inductees are continuing to at least tour, if not make new music, and push their legacy forward into new directions. "The Tipping Point" certainly qualifies as yet another move forward — and it's also one more mark in the column arguing for Tears for Fears to start to earn serious consideration for Rock Hall induction.

More stories about rock and or roll: