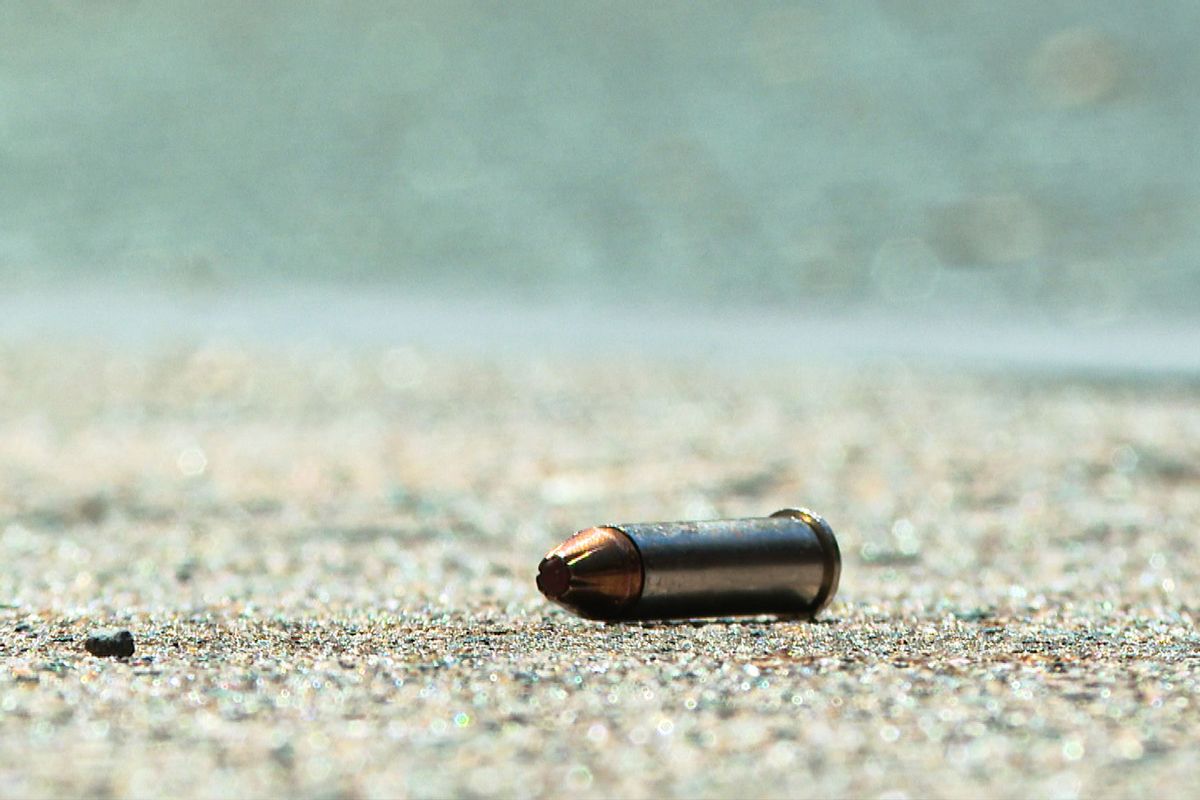 Bullet casing is seen at the crime scene after at least three people were killed and 11 injured in the shooting in the busy South Street area of Philadelphia, United States on June 5, 2022. According to the initial reports, multiple people opened fire on the crowd on Saturday. (Lokman Vural Elibol/Anadolu Agency via Getty Images)
--

After reassuring multiple people by text that my partner and I had been tucked safely in bed at 11:30 on Saturday night, I finally cracked and posted a general reassurance on Facebook. No, we had not been near the shooting on South Street in Philadelphia, where we live, that resulted in 3 deaths and 11 major injuries. But people's concerns weren't misplaced. We had been at a party in that neighborhood just the night before. Saturday's was the ninth mass shooting in the city this year alone, according to the Gun Violence Archive. There have been shootings at train stations and house parties. One group of victims was going to the prom. These things really are a matter of luck in a society that's swimming in as much gun violence as ours.

What made the South Street shooting particularly nerve-rattling was how unhinged the situation seems to have been. Current reports suggest it started as a fight between two young men, but at least three other civilians and a police officer whipped out guns and sent bullets flying everywhere. There's a very Wild West quality to the whole thing, except, you know, it happened in a 21st-century crowded city, with advanced gun tech, making the body count much higher than someone like Billy the Kid would have experienced.

This is all by design.

As Melissa Ryan wrote Monday morning in the Ctrl Alt Right Delete newsletter, "For the Right, mass shootings are a feature, not a bug." And as I have been arguing for at Salon, mass shootings are effective for Republicans at demoralizing their opposition and training their base to unlearn any lingering sense of empathy. Historian Ruth Ben-Shiat argued in October in the Washington Post, that gun violence "fosters political, social and psychological conditions that are propitious for autocracy." A major GOP campaign message going into the midterms is that "woke" Democrats are letting criminals run amok in the cities. Dramatic gun violence really helps sell this message, which is why Republicans are guaranteed to block any bill that would make it even slightly harder for violent and unhinged people to get guns.

This is how Republicans operate: Break things and then blame Democrats for the damage.

The price we're paying for the GOP's political propaganda is being paid, every day, in blood.

It was true of the 2008 economic crash. The misery was largely the fault of Republicans, due to lax regulation under George W. Bush and the GOP's unwillingness to support more robust recovery efforts when Barack Obama became president. Republicans didn't hide, however, that they planned to obstruct Obama's attempts to fix the problems. In Senate Minority Leader Mitch McConnell's infamous words, it was his mission to make Obama a "one-term president." We saw a similar strategy deployed against President Joe Biden. First, Republicans make the pandemic worse by convincing their voters not to vaccinate. Now they blame Biden because the pandemic is still a problem.

RELATED: Why Republicans will always ignore the red flags of mass shootings

Gun violence in Philadelphia is bad, just like in the rest of the country. The reasons aren't mysterious. Gun sales surged during the pandemic because decades of propaganda caused people to think they needed them to be "safe." (In reality, having a gun in the house increases your chances of injury or death.) More guns lead to more violence. Research shows that was especially true of this gun buying surge, as the percentage of newly purchased guns being used in crime surged. Things only promise to get worse because, no matter how much research says otherwise, people still have this asinine idea that the way to protect themselves from gun violence is to buy more guns. So this vicious cycle is perpetuated. People buy guns, which leads to more gun violence, which leads to more gun sales, and so on and so forth. Next thing you know, there are shootouts on South Street because everyone thinks they're in some goddamn action movie.

Republicans back policies that lead to violence that harms people of color, then they blame people of color in order to get votes from racist white people.

This works out great for the gun companies, who are booking record profits. It's also working out for Republicans, who happily exploit all this gun violence to sell paranoid, racist voters a story about how it's all the fault of Democrats, "wokeism" and Black people. Sometimes this gets very explicitly white nationalist. As Roger Sollenberger of Daily Beast reported over the weekend, Blake Masters, the Donald Trump-endorsed GOP candidate for Senate in Arizona, gave an interview in April in which he summed up what he thought was the cause of gun violence: "Black people, frankly."

The racism looks even uglier in the aftermath of the Buffalo, New York shooting, in which a white 18-year-old is alleged to have murdered a bunch of elderly Black grocery shoppers because he bought into the "great replacement" conspiracy theory Masters is peddling. It also notably ignores actually links shootings across the country, whether its's gang violence, fights, or mass shootings: Angry young men, regardless of race, who have way too easy access to weapons. Masters isn't stupid, and while I have no doubt his racism is entirely sincere, he is also a cynical propagandist. He's feeding directly into this vicious cycle. Whip up his conservatives into thinking they're in danger from people of different races, so that they buy more guns and support lax gun laws that then leads to more crime. Then use the crime to whip up more racist paranoia.

Of course, other Republican propagandists are a bit more subtle — though only a little bit — in their race-baiting, blaming "woke" prosecutors for crime instead of evoking racist stereotypes directly. Fox News is, of course, blaming Philadelphia's progressive district attorney, Larry Krasner, for the shooting. Right-wing media has also been hyping a recall election focused on similarly progressive San Francisco District Attorney Chesa Boudin. As the Washington Post notes, violent crime "remains at some of the lowest levels it has been in four decades" in San Francisco, but that hasn't slowed down the GOP narrative one bit.

"It is nothing more than a new version of the Southern strategy," Krasner told Business Insider. "They're saying 'big cities, lawless,' except all the big cities they're talking about are very Democratic and have huge Black and brown populations."

This race-baiting is especially gross when one considers that, despite the paranoia of the white GOP, racial minorities are more likely to be victims of gun violence. But that underscores just how nasty and cynical the Republican strategy here is. They back policies that lead to violence that harms people of color, then they blame people of color in order to get votes from racist white people. For Republicans, it's all political upside. For the rest of us, however, it comes at the price of living in a society where any of us, at any time, could find ourselves the victim of the latest angry young man with a gun taking his grievances out on strangers.

The price we're paying for the GOP's political propaganda is being paid, every day, in blood. And it's likely to get worse as the summer heats up and people's nerves remain frayed after all the stress of the past few years.