Celebrating the casual bisexuality in "Hacks"

With the fate of the HBO Max show uncertain, will we lose Ava, a nuanced and desperately needed bi character? 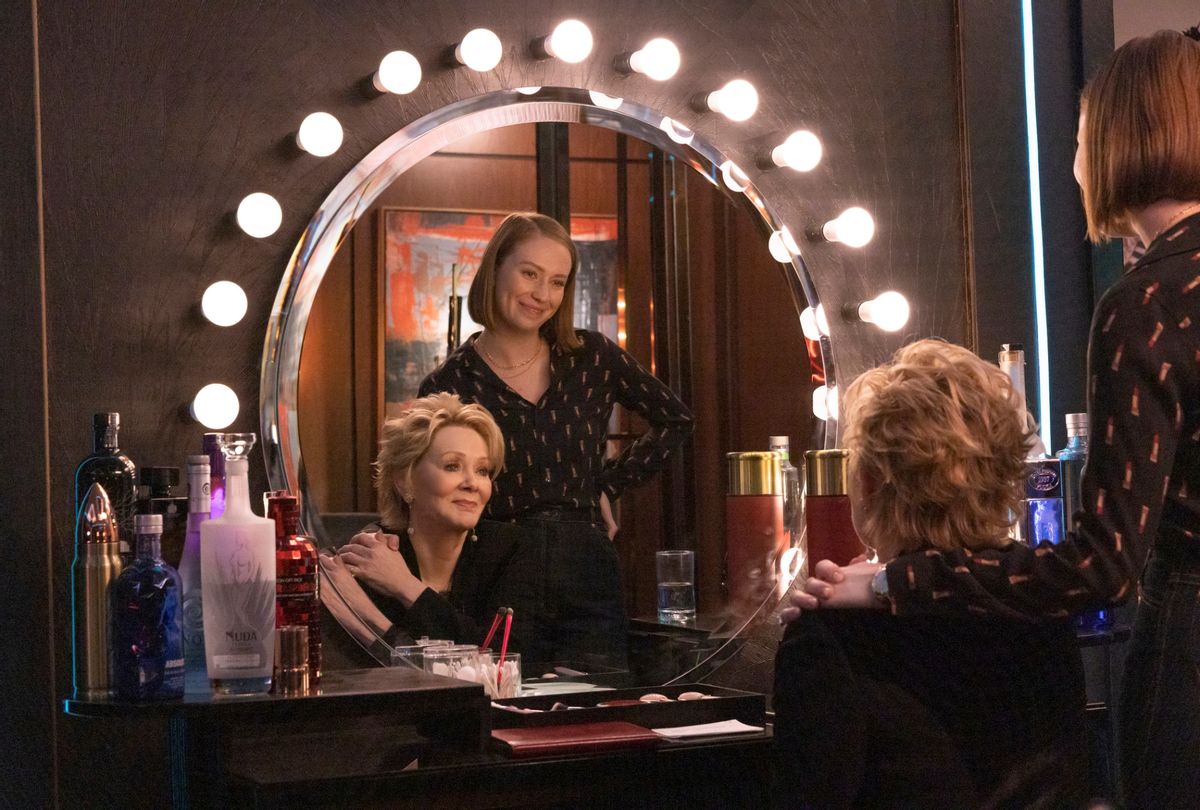 Shortly after "Fire Island" premiered, a tweet took off about the Hulu film, critiquing the lack of women in the story centering queer Asian men. Viewers were quick to defend the film, and the woman who criticized it became that thing you never want to be: the character of the day on Twitter. Stories about white women are rarely in short supply. But stories about certain kinds of queer experiences are often missing, including bisexuality.

RELATED: 2021 was an extraordinary year of making the nonbinary ordinary

The feelings often resurface this time of year, as some people feel ostracized or unwelcome at Pride events, which are supposed to be welcoming to all. Those who are bi, particularly bi women in relationships with men, can feel judged and isolated. Relationships don't define your identity or the core of who you are inside, but judgment by members of your own community, who are supposed to be accepting, can lead to feelings of being invisible — and worse. Who can forget the victim-blaming Ikea bisexual couch? (I prefer my grasping, bodiless hands in Jim Henson's "Labyrinth," thank you.)

Terrible furniture aside, biphobia is a real issue, as is bi erasure, despite bi people actually making up the largest group within the LGBTQI community. Receiving the message, even from other queer people, that you don't exist or that your identity doesn't matter, can lead to poor health outcomes, depression and abuse.

TV has made some strides when it comes to presenting bi stories and characters. The role of Callie (Sara Ramirez) on "Grey's Anatomy" is a good example. First married to George (whoops), Callie has a relationship with Erica, marries Arizona, then ends up with Penny (it is "Grey's Anatomy," after all). One of her character's typically no-nonsense quotes? "So, I'm bisexual. So what? It's a thing and it's real. I mean, it's called LGBTQ for a reason. There's a 'b' in there and it doesn't mean 'badass'. Okay, it kind of does, but it also means 'bi.'"

Other notable TV bisexuals include Rosa in "Brooklyn Nine-Nine." Played by Stephanie Beatriz, the actor's bisexuality was written into the show. Tara on "True Blood" has a relationship history with mostly no-good men, then has a relationship with Pam, who is also bisexual (and also awesome).

While TV bisexuality tends to focus on women, likely for their palatableness to a straight male audience, "Crazy Ex-Girlfriend" has the gold standard of a bi dude: Darryl Whitefeather (Pete Gardner), king of Dad jokes, supportive friend and singer of the banging tune "Gettin' Bi." Married to a woman, he gets divorced and at an older age, realizes he's bi and dates a wonderful man (I stan Darryl and White Josh). When that ends, he has a relationship with a woman. That's just life!

More consistently, however, if bisexuals are on TV, they're sexily dangerous and untrustworthy, from Eleanor in "The Good Place" to Dennis on "It's Always Sunny in Philadelphia."

Bisexuality is sometimes a stand-in in TV and films for evil (Scylla in "Motherland: Fort Salem"), sometimes a stand-in for promiscuity or indecisiveness and confusion (Alice on "The L Word"), and sometimes presented as not real (again with "The L Word" and whatever happened with Willow on "Buffy"). Fictional bisexuals are not uncommonly punished with death (Bill on "Killing Eve")

Engaging, realistic bi characters are still an endangered species. "Crazy Ex-Girlfriend" is over (why?!). Ramirez left "Grey's Anatomy," to terrorize us with the role of Che in "And Just Like That." And one lead in the heartwarming YA series "Heartstopper" is bi. Is there anywhere to turn for real and really good bi stories this Pride? 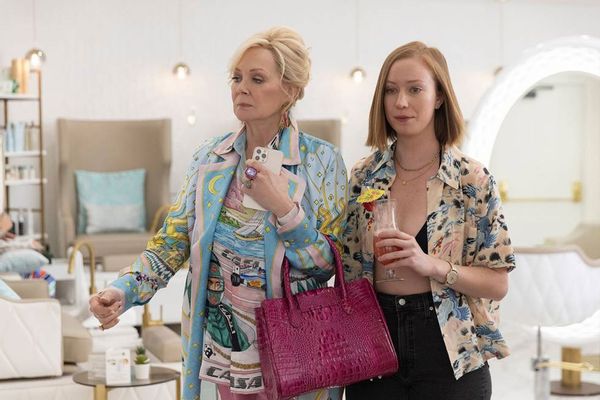 Jean Smart and Hannah Einbinder in "Hacks" (Karen Ballard/HBO Max)The HBO Max series, which just wrapped its second and possibly final season, tells the story of Deborah Vance (Jean Smart), a comedian who broke into the biz at a time when women were more likely to be the jokes than to tell them onstage, and who is trying desperately to hold on to her career as she commits that unforgivable sin for women in Hollywood: she ages. The Cagney to Deborah's Lacey (or, maybe they're both Cagney) is Ava (Hannah Einbinder), a young comedy writer who thinks her career is over before it begins. Her manager (Paul W. Downs), who handles both Deborah and Ava, convinces her to take a job in Las Vegas writing jokes for the comedian.

It's part of her. It's not the whole of the character. It just is.

Einbinder is openly bi and so is Ava. The character says so to Deborah early in their meeting, as Deborah comments on her outfit. Deborah critiquing Ava's androgynous dressing is a theme of the show, as is Deborah criticizing Ava in general.

Ava has an ex-girlfriend she sometimes misses too much, but importantly — and uniquely: in the show, she has hookups with multiple genders. Not a ton — this not the sordid, sexually depraved bisexual trope — but enough that her bisexuality is present. It's part of her. It's not the whole of the character. It just is. The show doesn't present it as shocking when Ava spends the night with a man she meets in a Vegas casino, or when she makes out with a couple on a lesbian cruise Deborah is inadvertently booked on.

In an interview with The Advocate, Einbinder said "I have at times, especially in my early days of attempting to accept myself, felt really out of place. I was never fully one thing, so I never fully belonged anywhere."

Ava is similarly adrift, struggling to make a living, to be a good daughter and to make it as a writer. Her relationships don't work out (so far), but at least she tries them, and the show gives her the space to try with multiple genders. Ava also finds community in Deborah's circle, with Marcus, a queer character in the show played by non-binary actor Carl Clemons-Hopkins, and eventually even with Deborah.

The two form an unexpected friendship. They're several generations apart (and miles apart, class-wise). Deborah is bitter, brilliant and hurting, at times borderline abusive to her staff, and Ava is just doing the best she can, occasionally making massive mistakes along the way. A drunken email at the end of Season 1 almost ended her work with Deborah — and maybe her work in general — forever.

It's not only that bisexuals feel invisible, but are often and increasingly the target of violence.

But these are just mistakes. This is not the tricksy bisexual cliché. Deborah certainly makes her mistakes too. And importantly, Ava owns up to her errors. She remedies them the best she can: ditching her smart phone for a flip phone so she can't email drunkenly, and giving up drinking (at least when she's not on a cruise).

This is a complex, engaging characterization of a person who just happens to be bi. It's a fact of her but not the only fact. But by even dramatizing it at all, "Hacks" is rare. 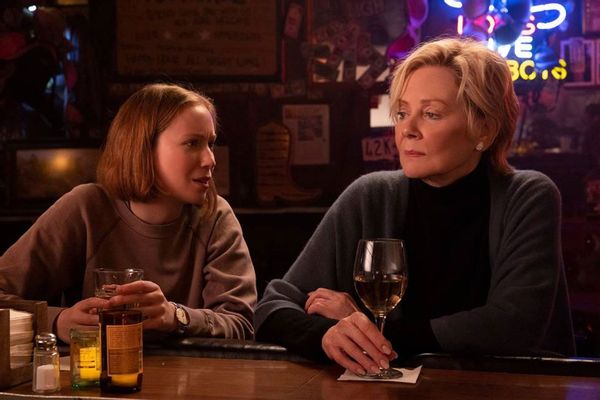 Jean Smart and Hannah Einbinder in "Hacks" (Karen Ballard/HBO Max)In Season 2, while her boss is painting her nails before she goes out, Ava talks candidly about being bi, and asks Deborah, after she's been disappointed by yet another man, if she ever questioned her own sexuality.  Deborah says she sometimes wished she was gay because it would have been easier than being with men. But Ava grows thoughtful and says, "But it wouldn't have actually been, right? To be queer when you grew up?"

Deborah, who survived decades of sexual harassment and saw many of her female contemporaries leave the art forever, says: "In my day, there were two options. You liked one, or you liked the other."

But Ava quietly persists: "I just think there's room for more nuance. Like, not every queer person feels like they arrive into existence with an attraction to like, a specific type of person, and that's OK too. Your sexuality isn't a choice but whether or not you examine it, I think, is."

The scene is long, intimate and real – and possibly the best explanation of sexuality since David Rose discussed his sexuality with Stevie Budd on "Schitt's Creek" using varietals of wine: "I like the wine, and not the label."

With the fate of a third season of "Hacks," uncertain, will we lose another accurate, nuanced and desperately needed bi character on TV? It's an urgent question. It's not only that bisexuals feel invisible, but are often and increasingly the target of violence. According to CDC, 60% of bisexual women have experienced rape, physical violence or intimate partner stalking. That's much higher than the rates of violence faced by straight women, lesbians, or straight or queer men.

We need Ava more than ever. As Einbinder told The Advocate: "I think if I had seen more images of bisexual characters, it would have been easier. It would have been more clear. My journey wouldn't have taken me so long."