Thomas Haden Church on his offbeat new "Acidman" role: "There is clearly something wrong with Lloyd" 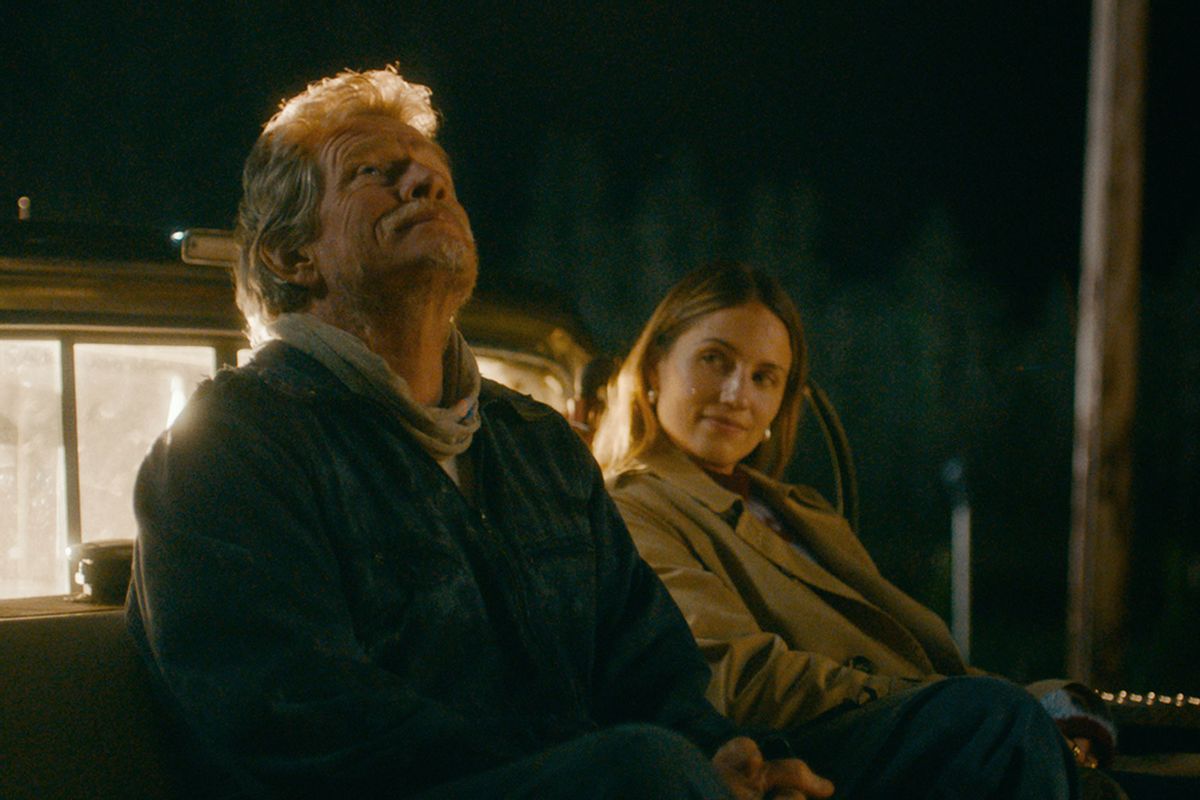 Thomas Haden Church is perfectly cast as Lloyd, the title character in "Acidman," a guy living largely off the grid in Oregon. In this poignant two-hander, directed and cowritten by Alex Lehmann ("Blue Jay,") Lloyd's daughter Maggie (Dianna Agron) shows up unannounced to do a wellness check on her father, whom she has not seen in a more than a decade. She finds Lloyd living in a messy home with his dog, Migo, and leaving at odd hours of the night to go on "searches" — where he communicates with IFOs, "identified flying objects" using morse code.

Church, who broke out as the oddball mechanic in "Wings," was Oscar-nominated for his role as the randy, engaged friend in "Sideways," and played the villain in "Spider-Man 3," is entirely convincing as Lloyd. He is both offbeat, enigmatic, and charismatic. What is great about his performance here is that neither Maggie nor viewers can anticipate what he might do or say next. Lloyd has moments of real clarity, but he also slips into "trances" from time to time. In one of the best scenes, Lloyd has a heart-to-heart with Maggie, while getting stoned in the back of his truck. But as father and daughter get reacquainted with one another, questions arise: Is Lloyd mentally ill? And what prompted Maggie to travel 2000 miles to see her father after all this time?

"Acidman" is an absorbing drama that addresses themes of family, trust, truth, and reality. Church spoke with Salon about his new film, which just premiered at the Tribeca Film Festival.

As an actor, you project a sly sense of humor, and have an offbeat delivery – it is both forceful and playful. Those qualities are very much in evidence with Lloyd. It is easy to write him off as a burnout case, but he marches to the beat of his own drum. How did you connect with the character?

I have to give a significant measure of credit to writer/director Alex Lehmann. Alex, Dianna [Agron] and I started having conversations about "Acidman" in the summer of 2020, but we did not shoot the picture until about a year ago. What I brought to the table was a story about this man who lived in Alabama that was a presence in my writing partner's life when he was growing up. The guy was a WWII-decorated veteran who existed in this rural community. My writing partner, David, told me about this guy over the last 30-plus years — his name was Lloyd. I started telling Alex the stories that David had being relayed to me. And Alex said, "I think we have a keyhole to how we can ground the character for you." We started weaving that tapestry together — things I knew about this person, but also how Alex saw the character of Lloyd. It is a personal story for Alex as well.

Lloyd goes into "trances," but he is also often very lucid. He speaks wisdom when stoned, but he also gets angry and depressed. How do you think the film portrays Lloyd's need to be off the grid, and disassociated from society? There are issues of mental illness raised here too.

He suffers from an emotional dissociative behavior — that whatever is in front of him is a very stark reality for him. What he believes, with his dog, for example, is that Migo will robotically obey commands with a snap of a finger and doesn't need to be on a leash. But at the same time, the dog roams freely, and Lloyd believes he has control over that. It's shocking to him, more than it is to [Maggie], who just bonds with the dog. Lloyd has dissociated from himself from needing to protect the dog, even though there are hunters in the area. And it is sort of the same with the [alien] presence. She's obviously skeptical of it, but he has a stark affirmation that whatever he sees and perceives. There is no other definition of what that is.

Lloyd's relationship with his daughter Maggie is really touching in the film; she is largely accepting of his behavior, even if she questions it or is concerned. She is trying to understand him, and I like that she lets him just be. He sizes her up pretty quickly and rightly. Can you discuss the dynamic of their relationship?

He was supposed to attend her college graduation and did not. She's now in early to mid-30s, so it's been 12, maybe 14 years, and Maggie is a completely different human as anyone would be from 22 to 35. Lloyd assumes she is exactly the same, but she is nowhere near the person Lloyd thinks she still is, but Lloyd's assessment of her emotionally is different. Again, it is a bit dissociative. He sees her for who she is, and he knows why she's there, but he is reverting a lot of the interaction to the way she was. It's antagonistic, but it is also kind of diametric in that she is insisting, "This is my presence," and he knows she is not being honest with herself.

There is a line in the film "The truth is more important than the facts." What do you think of that? I keep chewing on it. It is the choice between the heart and the head, what you think and what you feel.

His appearance, for one, is something Alex and I had talked about early on. Lloyd goes through life, and there's a real good chance that the only difference between Lloyd asleep and Lloyd awake has nothing to do with his appearance. Whenever and wherever he wakes up, and as soon as he is conscious, he just starts his march again, whether it is about music, nurturing the garden he has, which is kind of like a rainforest for lack of a better description, going off on treks with the dog. His head never enters into it; it's always his heart — it just dictates everything about him. In his mind, he's constantly going forward. When Maggie pulls back or presents any kind of defiance, he is: "You're either with me or against me." If she says, "This is what happened," he is only looking forward. Any of his musings about the past are playful ruminations. It's never too serious, except when he talks about his father dying. Those are lapses that happen when he goes into these silent seizures. It's like a vapor lock for his brain. He doesn't even know it happened.

I remember Michael London, the producer of "Sideways," told someone, "Thomas is very indecisive because his head and his heart are always in conflict," [laughs] which is a very interesting assessment. A lot of people in my life would agree with that. I try to be practical, because I'm a father. At times I try to be practical with my older daughter, who is about to start college in the fall — but it's emotional. I want her to be happy and I want her to feel empowered, and I want all the things a good dad wants for his soon to be 18-year-old daughter. It's a balance.

Do you think "Acidman" is about the sins of the father? That Lloyd left his family, thinking they would be better off?

I'm not sure he ever reflects on it like that. When she shows up, he has this, "Take me or leave me. Whatever you do that's your business" [attitude]. They do glacially move forward. There are many unspoken emotions. Maggie is hopeful. There is something ethereal about it. But there is clearly something wrong with Lloyd.

I was oddly moved by the scene where Lloyd confronts hunters on his property, and he is vulnerable. Yet, Lloyd rails against cynics, skeptics, and traitors, and obstacles in his path (war, the environment, etc.) He fires warning shots at teens who trash his house. Can you talk about what pushes his buttons?

You always put something, as an actor or a writer, of yourself into a performance, and there are some stark similarities whenever I reflect on myself. What Lloyd responds to and what he is so defiant about is the possibility that somebody is forcing him to do something that he doesn't want to do. All the clichés — bullying, or intimidation, or aggressive management, all the phraseology that is synonymous. He is so completely free and independent, and he has thrown off all of the battle chains of society. When Maggie shows up, here's a responsibility that he left behind. That scene [with the hunters] we put in late. There was never violent confrontation, but I thought he has to physically confront them. The way we staged it was hard to do, going through the creek was physically difficult, but I loved that. Alex wanted there to be a significant obstruction for Lloyd.

You are an executive producer on "Acidman." Are you looking to work more behind the camera?

I did another picture in the fall that I produced, and I'm writing a script now. I'm not moving away from acting; I did three pictures last year, including "Spider-Man: No Way Home," which was huge. But it's always been something that has been there. I started out writing before I was an actor. It's been a part of my life even back to the mid-1990s. I was a de facto producer and writer on "Ned and Stacy" for both seasons, and that really inspired my writing partner and I to work more. I directed and we cowrote a film that was at Sundance in 2003, ["Rolling Kansas"] and, I was going to direct a picture for Fox, then the "Sideways" script showed up. I knew Alexander Payne and met with him on "Election" and "About Schmidt." Destiny took the reins.