We'll always have Geneva: A tale of two sauces

Picture it: Geneva, Switzerland, 1979. Me on bended knee, with a ring I’d emptied my bank account to buy. 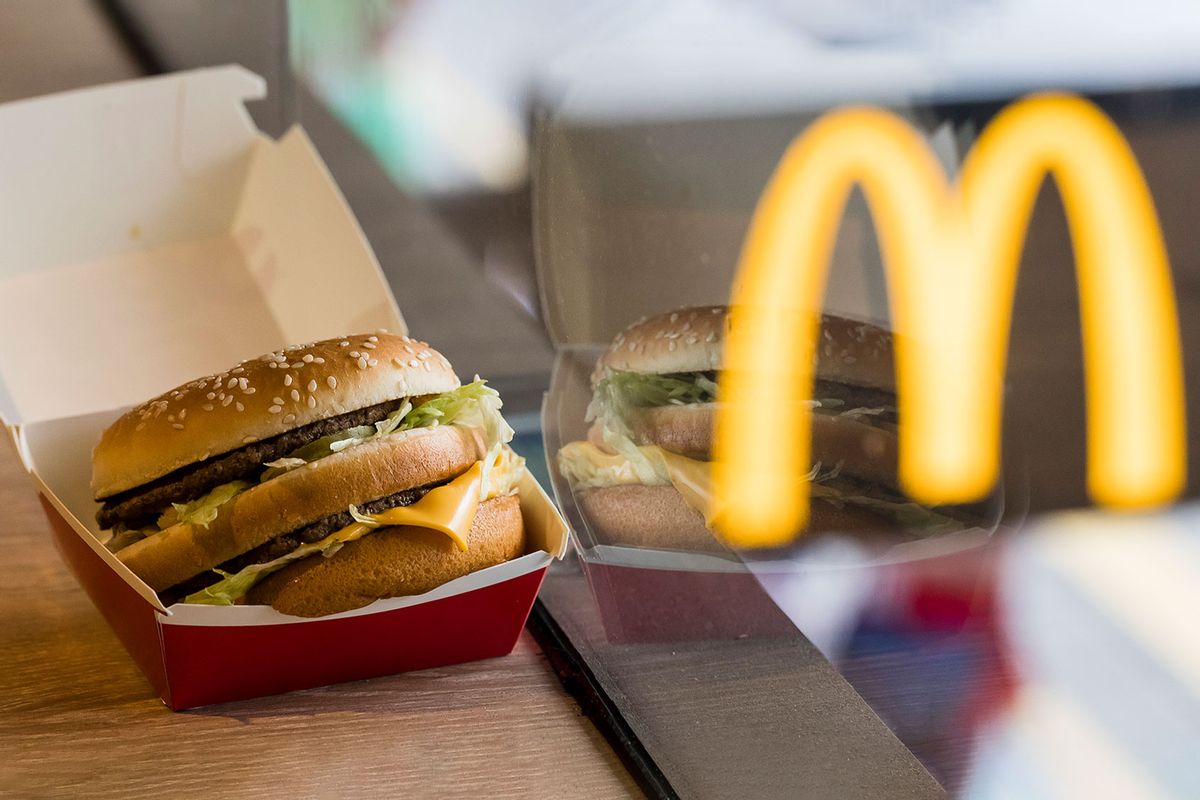 Picture it: Geneva, Switzerland, 1979. Me on bended knee, with a ring I'd emptied my bank account to buy.

She can't answer, because her mouth is full. We're at a McDonald's and she's eating a Big Mac. I'd planned to propose at Les Ambassadeurs, in Paris, where we ate a few days earlier.  I was enjoying my Sole Meunier and gearing up to make my move when Val sent back her lobster, claiming it was over salted, and there was a scene, and I held my fire.  "Yes," says Val when she's swallowed her food.

God knows, Val loves Big Macs. I sometimes think, instead of the dishes I prepare for  her, she'd be happier if I just gave her a Big Mac. In fact, she's said so, on more than one  occasion.

"What's so special about a Big Mac?" I asked one time.

Related: The key to better burgers: make your own special sauce at home

She got a dreamy look in her eyes.

"It's nothing but ketchup and mayo with pepper and garlic."

"I highly doubt that," Val said. "And anyway, it's the whole thing I like." "The meat is frozen! If you must eat burgers from McDonald's, at least get the quarter  pounder with cheese. It's made with fresh beef."

As for my children, I wish I could feed them Big Macs, but no –– they insist on my  preparing scratch-cooked meals and then they complain.

"Is this off the bone?" says my daughter, Mona, when I cook a whole chicken and serve her slices.

"That's a little too real."

"Why don't you ever make vegan dishes?" says my son, Jimmy, when I serve him bouillabaisse.

In all fairness, Val has praised more than a few of my dishes. She's a fan of my beef  bourguignon. She approves of my dorade in wine sauce. And she gave my Wiener schnitzel a  thumbs up. My fried chicken is another story. I once tried making a batch from a reliable  cooking Web site.

"The coating is like glue," said Val as she spit it out. "It's falling off the chicken." "I followed the recipe exactly."

"You're banned from making fried chicken."

"Give me another chance."

"You're just trying to get back at me because I banned you."

Years ago, after she burned one too many dishes, I asked Val to turn in her plaque –– literally: she'd hung a plaque over the stove that read, "Val's Kitchen."

In truth, I should have banned Val after the first meal she cooked for me. It was on our  second date, at my studio apartment on West 87th Street. Val breezed in with a bag of jumbo shrimp and a bottle of olive oil. Now, shrimp holds a special meaning for me. Growing up on Long  Island, my parents would occasionally take the family for a splurge at the local Chinese  restaurant. We didn't have a lot of money and I knew not to ask for any of the more expensive  dishes, to save my parents from having to say no. I'd sneak longing looks at people at other  tables, eating shrimp. The only fish I ever had was the flounder my father caught from his  Bayliner in the Great South Bay, which my poor mother –– who hated fish –– had to clean and  filet. When asked what I wanted, I'd say Chicken Chow Mein –– secretly vowing that, if I ever  had the money, I would buy shrimp. And so I did. But I rarely bought jumbo shrimp –– that seemed extravagant. So, when Val came over with jumbo shrimp that night, I was doubly  excited: first, by the sight of Val and, second, by the sight of jumbo shrimp. I sat on my Murphy  bed and watched in high anticipation as Val prepared the meal.

She served it to me and I took a bite.

It was not fine; it was way oily. Turned out, Val hadn't heated the oil, and never brought  it up to heat. As for seasoning, she claimed to have salted it, but I couldn't taste any salt, much  less any spices. To be polite, I forced down four or five shrimp before a defeated Val tossed the  rest in the trash.

After Val's banning, a certain cynicism about serious cooking has sometimes surfaced.  For example, some time ago, she served Celeste lasagna to my boss and his wife, passed it off as  her own, and claimed to be vindicated because our guests professed to like it.

When all is said and done, I think Val is happy I'm doing the cooking. She knows how much pleasure it gives me to prepare a dish she enjoys. I only wish I could have pleased her this  past Valentine's Day, when I made crispy orange beef. I'd never made it before and I lost sleep  the night before, worrying about how best to prepare it. I got started first thing in the morning, using recipes from America's Test Kitchen and The Sun Lee Cookbook. In order to tenderize the  meat (I used flank steak, which can be a little tough), I followed Shun Lee's direction to coat the  pieces in baking soda first, then rest them in the fridge for four hours, and finally, dredge them in  flour. For the sauce, I used fresh-squeezed orange juice, per America's Test Kitchen; and Grand  Marnier, per Shun Lee.

The children had come over for the occasion and, while they watched TV in the family  room, I prepared the meal. We have an open floor plan, so I could see the others while I cooked.  Mona had brought her Chihuahua, Harry, with her and he was stationed nearby, the better to get  a taste, if he could. I tossed him a morsel and he ate it with relish. Now that I had Harry's  approval, I served Val, presenting the dish on a China plate and calling it Orange Beef Royale.  From back in the kitchen, I watched Val take her first bite. Looking furtively at the kids, she  rolled her eyes and seemed as if she would spit the food out.

I could see her calculating how to spare my feelings.

I went over and tasted a piece of the meat. It was definitely not chewy.

"What about the sauce?" I asked.

In fact, it was delicious. I was crushed. It was unfair. But if Jean-Georges could take Val's criticism without complaint, so could I.

"I'm sorry you don't like it." I said, taking the plate back to the kitchen.

I prepared a plate for Mona.

She gave Harry a few pieces and he gobbled them up.

Jimmy, who was hungry at this point, tried the dish as well.

I tasted a piece of Jimmy's beef. It was too crispy: I'd over cooked it. I was going to make him something else, but he'd already cleaned his plate.

"You've been working all morning," said Val, now in full apology mode. "Take a rest." "I could use some fresh air. I won't be long."

I walked in no particular direction, talking things over with Harry.

That meat was not chewy, I told him. You tasted it. Was it chewy?

I thought it was good, but Val found it chewy, I imagined Harry to answer. What does she know?

She knows what she likes.

She likes Big Macs, I scoffed.

She was eating one when you proposed to her. She loves them.

This gives me pause.

It's Valentine's Day, and your wife is hungry. What are you going to do?

I had to make things right. I walked toward Broadway. Returning home, I slipped into the  kitchen, hiding the bag I'd brought back. I quickly removed the item from the bag, unwrapped it,  set it on a plate and served it to Val.

"Eat it while it's still warm."

She proceeded to eat her burger with relish –– or, to be precise, with special sauce.