Language is flexible, unlike Bette Midler and Jordan Peterson

Midler joins Peterson as the latest in toxic transphobia as she panic tweets: "They don’t call us 'women' anymore" 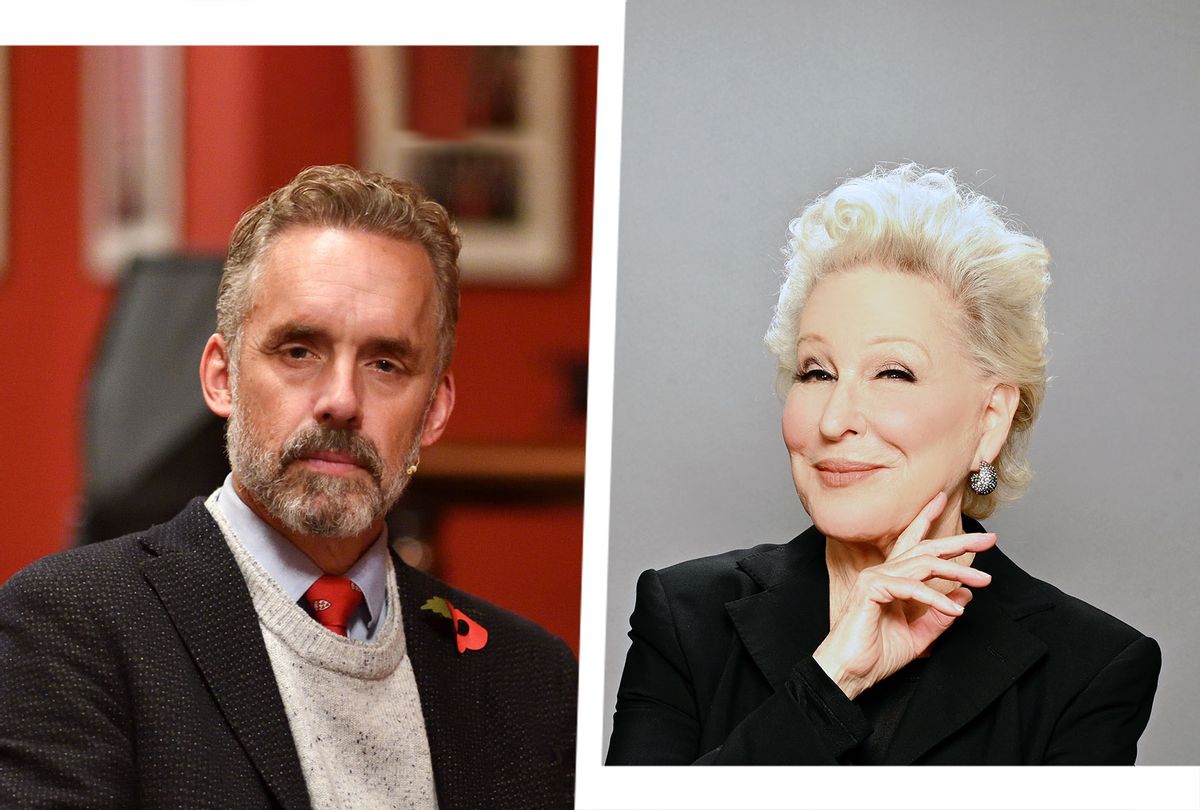 A hot 4th of July weekend, which saw yet another deadly mass shooting, brought out the worst in some people. On the holiday, singer, actor and environmental activist Bette Midler tweeted that inclusive language eradicates women. A few days previously, Twitter suspended psychologist Jordan Peterson for tweeting derogatory remarks about "Umbrella Academy" actor Elliot Page, who is trans.

Peterson reminisced about when Pride was a "sin," referenced a "criminal physician" who performed surgery on Page and deadnamed the actor. (Deadnaming is referring to a person by a name they have asked to no longer be called.)

"The Rubin Report" host Dave Rubin was then also suspended by Twitter for sharing a screenshot of Peterson's inflammatory tweet, a tweet conservative commentator Ben Shapiro shared as well, along with adding his own derogatory comments. Twitter stated that Peterson could have his account restored if he deleted the offending tweet. Peterson said he "would rather die" than delete it. Then, he deleted it.

Finally, on July 4, musician Macy Gray also made transphobic remarks on Fox Nation's "Piers Morgan Uncensored," where she said: "Just because you go change your parts, doesn't make you a woman, sorry."

All this was in the span of only a few days, and only a few weeks after the monumental decision by the Supreme Court that reversed Roe v. Wade, leading many to fear that marriage equality and other rights for queer people may be next. It's unclear why celebrities continually feel the need to comment, but the remarks of the aging Midler, Gray, Peterson and others fail to take into account a key facet of language: it's flexible. Throughout time, language changes and will continue to change whether or not public figures acknowledge it.

RELATED: Stevie Nicks' abortion and the freedom to choose you

The sudden rash in derogatory comments regarding trans people is in response to the push to use inclusive language when talking or writing about reproductive rights, which are urgently in the spotlight again. The media is reporting story after story — and Americans are writing social media post after social media post — about abortion. But some of the stories and many of these posts leave out key people in the debate.

Not only women are impacted by the Roe v. Wade reversal. Not only women need abortions or are affected by issues around abortion, including infertility.

Girls need abortions. Children do. Trans people, intersex people, nonbinary people and a whole host of people do. People is the operative word here — a simple word, yet one some feel uncomfortable using. As the American Civil Liberties Union (ACLU) writes, "When conversations about abortion reduce it to a 'women's issue' or an issue only for people who can carry pregnancies, we exclude a wide swath of people."

Yet that's exactly what Midler did, writing in her tweet: "We are being stripped of our rights over our bodies, our lives and even of our name! They don't call us 'women' anymore; they call us 'birthing people' or 'menstruators,' and even 'people with vaginas'! Don't let them erase you!"

The only people in danger of being erased in Midler's tweet are the very people she runs over. As writer Roxanne Gay responded: "No one is trying to erase women with inclusive language about people who need abortion care. No one is calling you anything but what you prefer. You should extend that courtesy in return."

Excluding people from the conversation is another way to make things harder for them, to make people forget about them and stop seeing them as human, deserving of care — or of rights.

That's triggering for conservative pundits like Shapiro, who have long made Page a target in tantrum-y videos. But the Midler tweet has been especially disappointing for some fans, given how the actor-singer has historically been a very vocal supporter of gay rights. With her tweet, Midler, like writer J.K. Rowling before her, takes a stance that aligns with that of trans-exclusionary radical feminists (TERFS), who exclude the rights of trans women in their women's rights advocacy.

According to the ACLU, "The fight for abortion rights and LGBTQ+ rights go hand in hand because they are both ultimately about protecting our bodily autonomy. But they're also intertwined because lesbians, bisexuals, trans people, queer people and yes, some trans gay men, can experience pregnancy and deserve control over if, when, and how we become pregnant, and whether or not we stay pregnant."

What's the big issue with leaving out people in the abortion debate? It's already very difficult for trans people, queer people and others to receive medical care. It's already difficult for children to receive life-saving abortions. Excluding people from the conversation is another way to make things harder for them, to make people forget about them and stop seeing them as human, deserving of care — or of rights.

If we can say phrases like "vibes" and "cringe," we can certainly say "people" when we talk about abortion.

Calling someone what they want to be called, including them in conversations that do concern and impact them, is a simple thing and one people have had no problem with for generations. No one raises a fuss when a woman goes by a different name after marriage (though some still raise antiquated eyebrows at people going by a wife's last name or not changing names at all after marriage). No one protests immigrants who sometimes use American-ized versions of their names. No one throws a pundit-level fit about a nickname.

Language is fluid. It's ever-shifting and growing as we grow as people. We learn some words are hateful and stop using them. We add new words into our usage all the time; so does the Oxford English Dictionary, which has recently added words like "unvaxxed," and Merriam-Webster, which last year added "deplatform" and "super-spreader," among others. If we can say phrases like "vibes" and "cringe," we can certainly say "people" when we talk about abortion. We can certainly call trans and all people by their names.

Inclusive language does just that: it includes. It doesn't push people out or negate them: it simply makes room for those who have been shoved aside, ignored and abused for generations. It doesn't hurt to use. It hurts to leave out.