In an emotional essay published for Esquire, Page reflects on his coming out journey and the hardships he endured 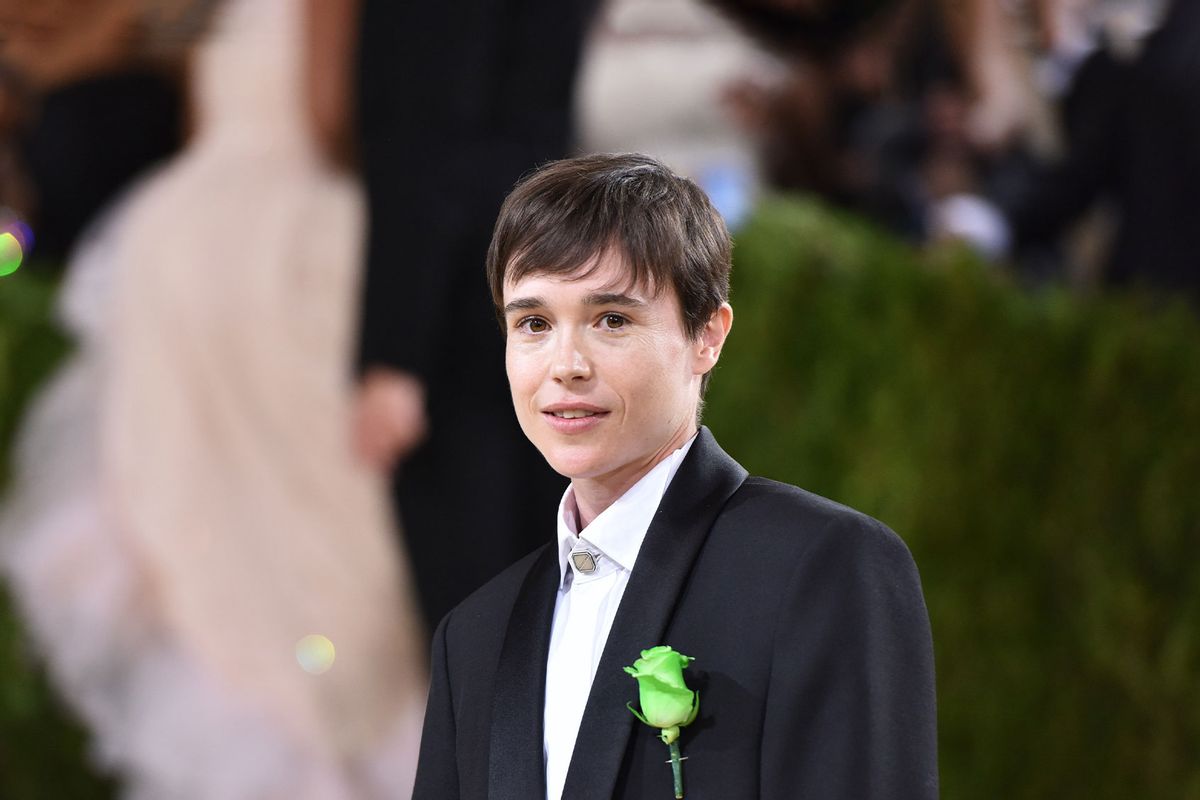 Elliot Page attends 2021 Costume Institute Benefit - In America: A Lexicon of Fashion at the Metropolitan Museum of Art on September 13, 2021 in New York City. (Sean Zanni/Patrick McMullan via Getty Images)
--

In a guest column for Esquire published on Wednesday, Elliot Page penned an emotional, freeform essay reflecting on coming out as transgender, the state of the world, and what makes him happy now. "I can't overstate the biggest joy, which is really seeing yourself. I know I look different to others, but to me I'm just starting to look like myself," he states.

Looking back, however, he recalls the mental hardships he experienced doing press for "Juno," the Diablo Cody-penned film that won an Oscar for its original screenplay and was nominated for best picture. Page — who was just 20 at the time — made history for debut in Jason Reitman's coming-of-age abortion drama, for which he earned an Oscar nomination for his performance as the film's titular protagonist Juno MacGuff. The acclaim and publicity, however, proved to be difficult for Page as he struggled with "intense depression, anxiety, and severe panic attacks" while having to suppress his own identity.

"When 'Juno' was at the height of its popularity, during awards-season time, I was closeted, dressed in heels and the whole look — I wasn't OK and I didn't know how to talk about that with anyone," Page wrote.

There was one person who he could confide in, though: actor Catherine Keener. "I was living in a hotel by myself, and she came and got me," he writes. "I lived with her. For my 21st birthday, she had a surprise party for me."

In gratitude, Page tattooed "c keens" – his nickname for Keener – on his body. It was the first of nine tattoos that predominantly honor his friends and relationships. The actor officially came out as transgender 13 years later, in 2020.

RELATED: With Elliot Page, increased visibility of transmasculine identity can be "both great & awful"

Page also revealed that during the "Juno" premiere, the film's distributor, Fox Searchlight, demanded that Page wear a dress on the red carpet, even though he had wanted to wear a suit, but was ultimately denied.

"I think of times when people actively were like, 'No, you need to wear a dress' in very, very, very pivotal moments. I remember the premiere of 'Juno' at the Toronto International Film Festival," he recalled. "I said I wanted to wear a suit, and Fox Searchlight was basically like, 'No, you need to wear a dress.' And they took me in a big rush to one of those fancy stores on Bloor Street. They had me wear a dress, and… that was that. And then all the 'Juno' press, all the photo shoots — [co-star] Michael Cera was in slacks and sneakers. I look back at the photos, and I'm like . . .?"

Page continued, "I've had to have plenty of devil's-advocate conversations with cis people who were like, 'Well, I'm not trans and I could wear a skirt!' And it's like, cool. OK. Great. So yeah, in my early to mid-20s, I didn't know how to tell people how unwell I was. I would berate myself for it. I was living the life and my dreams were coming true, and all that was happening."

He stresses how traumatizing the whole experience was, especially when others continued to belittle his struggles and dismiss them as insignificant.

"But when 'Juno' was blowing up — this sounds strange to people, and I get that people don't understand," Page explained. "Oh, f**k you, you're famous, and you have money, and you had to wear a dress, boo-hoo. I don't not understand that reaction. But that's mixed with: I wish people would understand that that shit literally did almost kill me."

"That was really extremely, extremely f**ked up," he added. "I shouldn't have to treat it like just this thing that happened — this somewhat normal thing. It's like: No. Regardless of me being trans! I've had people who've apologized about things: 'Sorry, I didn't know, I didn't know at the time.' It doesn't matter! It doesn't matter if I'm trans or cis. Lots of cis women dress how I dress. That has nothing to f**king do with it."

Page also called out the transphobia that's been so prevalent in comedy, especially most recently.

"Jokes have an impact that hurts people. I understand that people might think it doesn't. I understand that they're not meaning to. But: It's not a joke. It's not a joke," he said. "You believe what you're saying. You believe it. It's not a joke. They believe it. It's clearly not a joke. And all we're saying is: Can you just please listen and understand the harm that it causes? That's all we're trying to say. That is literally all we are trying to say. And then we get inundated with hatred for saying it. But I'm sorry: You are the ones who don't want to have the conversation. You are the ones who are so sensitive, who can't handle people saying, Hey, can you not do that?"

Page stars in the third season of Netflix's hit superhero series "The Umbrella Academy," which returns on June 22. Back in March, the actor announced on Twitter that his character, named Viktor Hargreeves, will come out as transgender and use he/him/his pronouns, in line with the actor's own transition.

"I love making 'The Umbrella Academy,'" he wrote. "I've learned how special it is to play one character for so long, to evolve with a family of characters. All of us have gone through a lot. Years have gone by, and we've changed and grown in our own ways. I love watching the growth happen alongside the show, our personalities interweaving and all of us having our own moments. I'm just learning to love the whole journey of it."