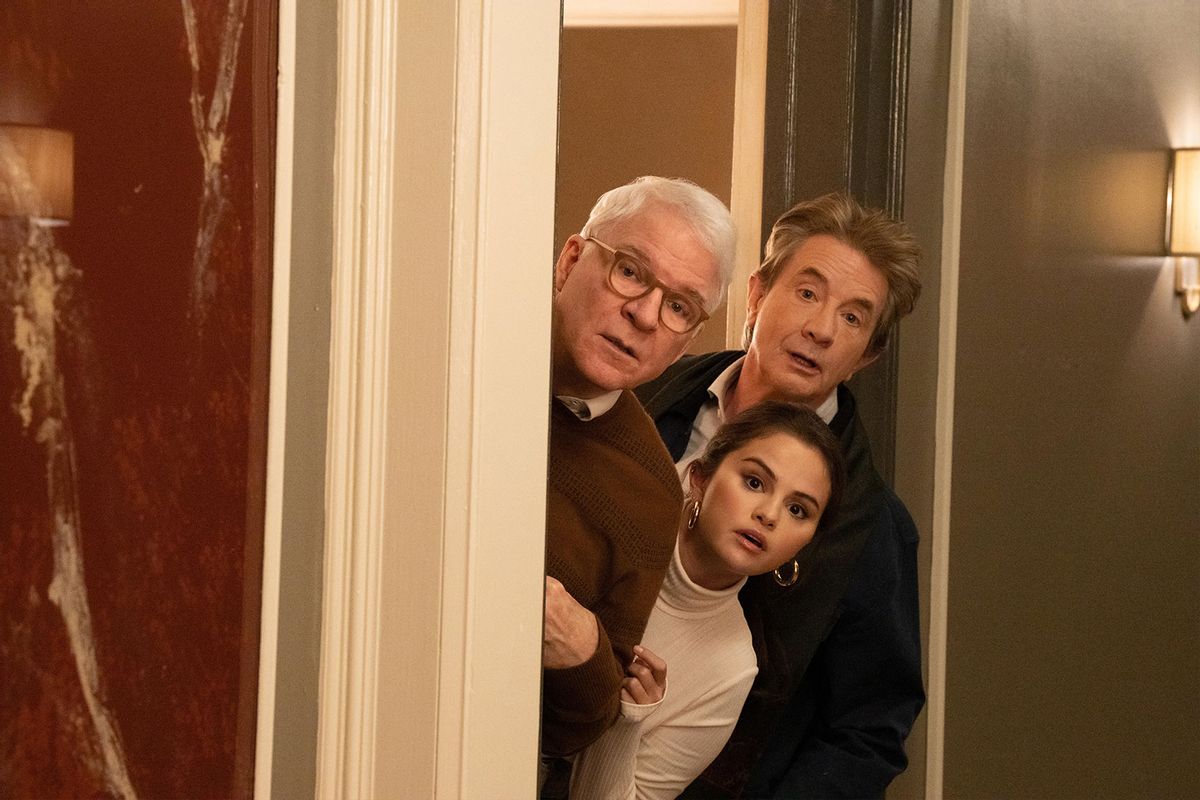 The following contains minor spoilers from Season 2, Episode 4 of "Only Murders in the Building," titled "Here's Looking at You."

A reccurring nightmare from my childhood was that there was someone — a man — living in our attic, spying through the air conditioning vent above my bed. It's easy to trace where that nightmare came from: everywhere.

These were the years of Wes Craven's "The People Under the Stairs," with hurt children kept, you guessed it, under the stairs of a large, creepy house, and a beloved novel "Behind the Attic Wall" where a neglected girl befriends talking dolls in a secret attic room, a sort of "Flowers in the Attic" for tweens. And there was V.C. Andrews' book itself, where children are forced to grow up in an attic, hidden from the rest of the house (and world).

In every house we lived in, my siblings and I desperately searched for a hidden closet, a dumbwaiter, a passageway, anything — something to deliver us out of our lives and into another life, an adventure of cobwebs and creeping around. In "Only Murders in the Building," Lucy gets that wish, and her sort-of, almost stepfather Charles, along with Oliver and Mabel, are treated to her knowledge of their tony apartment building's inner mysteries.

If you thought the Arconia was lovely, wait until you see inside . . .  deep inside.

RELATED: "Only Murders in the Building" returns with a lovable stab at familiarity

The second season of the Hulu show treats us to Lucy (Zoe Margaret Colletti), the daughter of a woman with whom Charles (Steve Martin) had a long-term relationship. Lucy and her mom moved in with Charles, and he established a bond with the child, only to have it severed when the relationship ended. Now Lucy's a teen and she's run away from home after fighting with her mother. Where else to go but her old home the Arconia?

After news broke about the secret rooms, all the mirrors in the building were swiftly bolted down.

She knows it well, well enough she hides out in its walls when she's not able to connect with Charles right away. The Arconia, like any historic building, has its secrets. It also has tunnels running through the walls. Ever the know-it-all, Charles theorizes the tunnels were "used during Prohibition, for moving contraband;" Mabel more astutely guesses "perving" and Oliver describes the passageways as "the killer's secret lair."

They're likely each right. 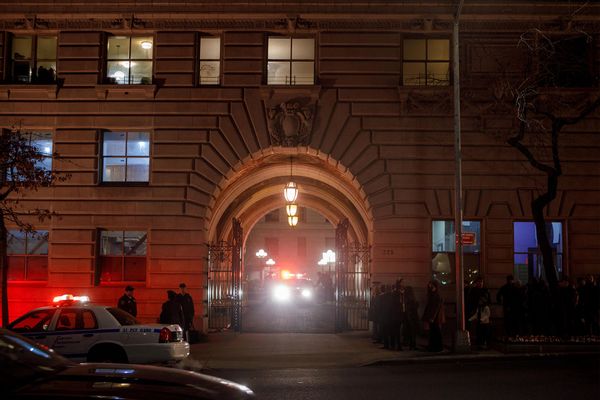 Only Murders In The Building (Craig Blankenhorn/Hulu)Secret passageways exist in buildings due to a variety of reasons. They were used as escape routes; for staff to move about a great house or building; for smuggling, speakeasies or bootlegging. Sometimes new construction or additions will simply create a false door or bricked-in window in older buildings, or make a pocket of space sealed off by new walls.

The Arconia, the stately — and older  — apartment building where all the main characters live and where murders keep happening, is based on several real apartment buildings in New York. Martin and series co-creator John Hoffman interviewed residents of those apartments and pored over plans. Hoffman told Thrillist: "Steve loves blueprints."

And while they didn't find any peepholes in the buildings they studied, they did find some hidden stairs. They had plenty of inspiration too. Hoffman said: "During the pandemic, there were a lot of those great stories. There was a video of a woman who found an entire apartment behind her bathroom mirror."

What was a person to do in the early, isolating days of COVID except get around to long-delayed home projects, including investigating mysterious cold drafts? And if those drafts led into a secret room — well, you went in.

It's not exactly clear why and how the secret apartment existed, hidden behind the bathroom, accessible via crawling through a mirror, "Alice Through the Looking Glass"-style. The woman said in an interview that "even management" did not have an answer. The six-building Roosevelt Island apartment complex used to be part of the Mitchell-Lama affordable-housing program, and after news broke about the secret rooms, all the mirrors in the building were swiftly bolted down.

Is there anything scarier than someone inside the house?

Less "Candyman" and more H. H. Holmes, the passageways in the Arconia seemingly run behind most of the apartments, providing windows into residents' worlds through vents and cracks. Ladders link the floors. The tunnels do include creepy peepholes, and they were put there on purpose by the Arconia's architect, an "infamous playboy" who liked to watch. Housing board matriarch Bunny (Jayne Houdyshell) describes the building's flourishes as "little secrets known only to the architect himself."

But they're known to Bunny too, the architect's granddaughter (so that's how you get a decent apartment in New York!). Disturbingly, the architect raised his family in the same building he booby-trapped to spy on women. Poor Bunny was probably not able to get away with a lot as a child, not if her grandpa was watching. 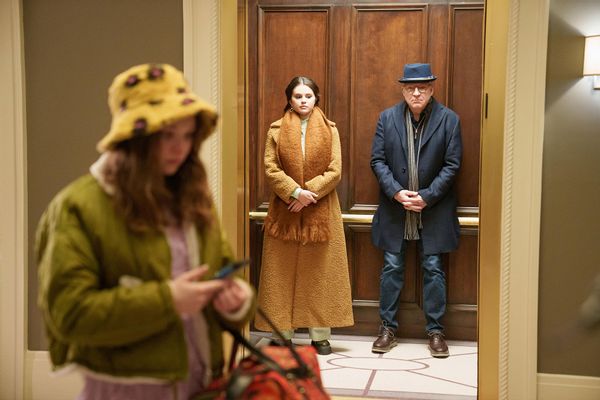 Lucy (Zoe Margaret Colletti), Mabel (Selena Gomez) and Charles (Steve Martin) in "Only Murders In The Building" (Craig Blankenhorn/Hulu)Passageways and other building secrets are often used for nefarious purposes, in life and in fiction, like lying in wait for murdering. The killer in 1974's "Black Christmas" uses the attic of a sorority house as his homicidal home base. This film is considered the first use of "the call is coming from inside the house" trope, as cops trace obscene phone calls received by the sorority sisters to their home itself.

Is there anything scarier than someone inside the house? Allegedly based on an unsolved babysitter slaying (or maybe just an urban legend), the trope has rung through films from "When a Stranger Calls" to "Urban Legend" to "Scream," and TV such as "CSI" and "Criminal Minds." The 1993 sequel "When a Stranger Calls Back" utilizes the killer inside the house to its full, nauseating potential: he's not only in the walls, he is the walls. 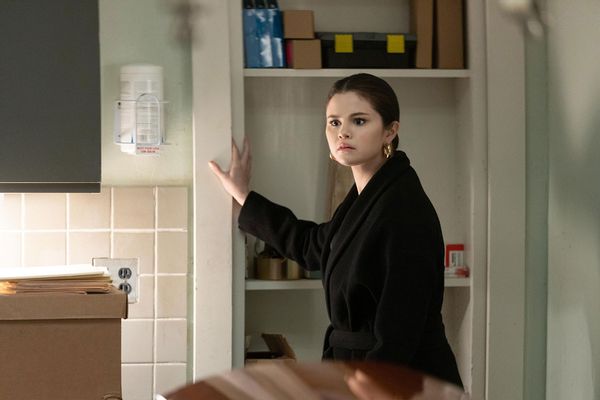 Mabel (Selena Gomez) in "Only Murders In The Building" (Craig Blankenhorn/Hulu)Passageways are prime locations for spying, stalking, sneaking around, But Bunny uses the hidden elevator in her apartment simply for convenience sake: a handy exit. It's a way for her to get outside without running into anyone she doesn't want to see (what I would have given for such a magical, invisible elevator when I lived in a small, gossipy town and had to go to the grocery store).

The quirks of the Arconia fulfill our deepest need: to be special, and our darkest, primal fear: that we aren't safe.

Similarly practical, the dumbwaiter was intended as a mini freight elevator to deliver food quickly, keeping it hot or cool (but how many characters have hidden from murderers in them? Or, are accidentally crushed in them?). And yet when I finally, as an adult, had a dumbwaiter shaft in my old, rented house, I found it scary, drafty. Too small for anyone to hide inside, I still had the urge to nail the door shut.

When you're a child, discovering tunnels as Lucy did, playing hide and seek, you think you can pass through them, unnoticed. When you're an adult, you realize anything can. The quirks of the Arconia fulfill our deepest need: to be special, and our darkest, primal fear: that we aren't safe.

The residents of the Arconia aren't alone, that's for certain. Like every new clue in a Brazzos case, each uncovered secret passageway sends the investigation — or at least our humble investigators — into a whole new direction.

"Only Murders in the Building" streams new episodes Tuesdays on Hulu.