Through Bunny, "Only Murders in the Building" pays tribute to the watchful neighborhood matron 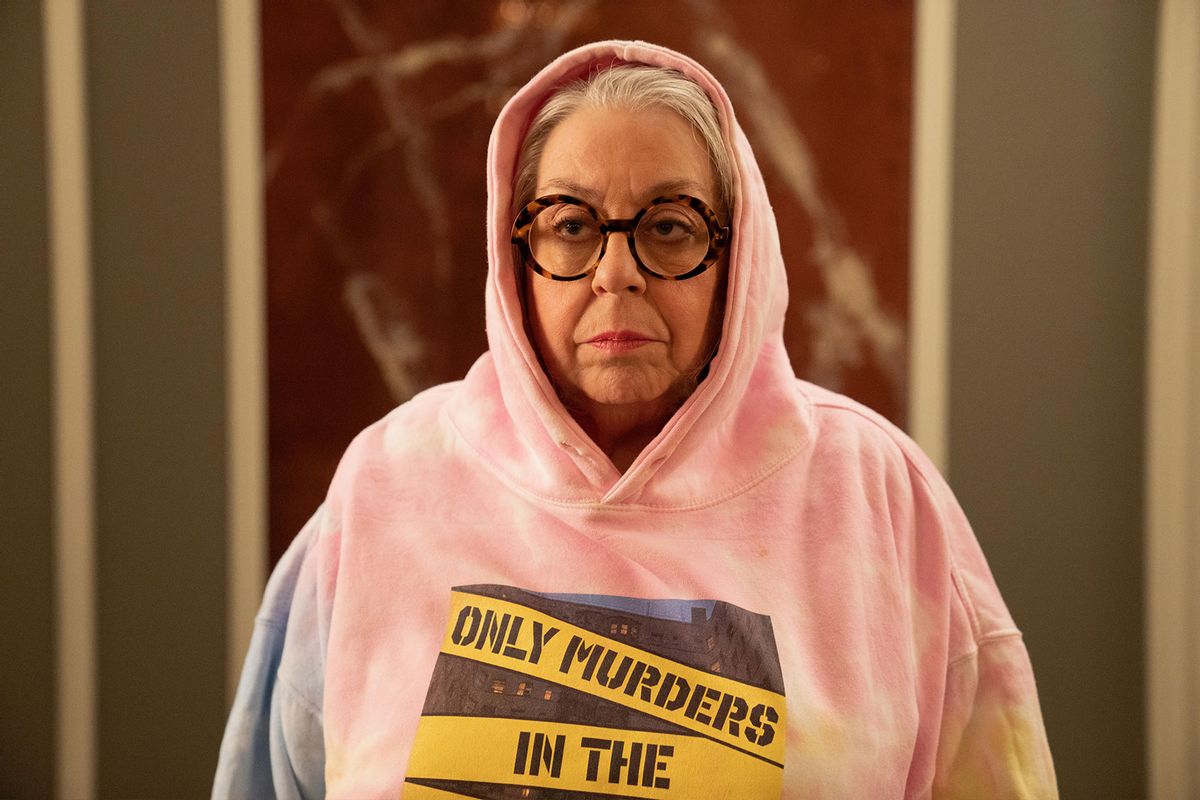 Not so long ago, many of us could claim to know some version of Bunny Folger, The Arconia's less-than-dearly departed grand dame on Hulu's "Only Murders in the Building." A few of us still do.

She is that neighbor who remembers when your decades-old house was nothing more than a field of weeds or the old lady who has lived in her apartment since the building was new. Everybody knows her name. Everybody suspects she knows much more about them, and where they're living, than they do about her and how she lives.

Maybe her watchfulness is a matter of self-preservation, or an adherence to some philosophy of minding thy neighbor that died out sometime in the changing of the generational guard between the Silents, the Boomers, and Generation X. Whatever that woman's motivation is, the fact that she knows everyone's business makes her a community treasure to some and a menace to others.

In "The Last Day of Bunny Folger," writer Ben Smith reveals Jayne Houdyshell's recently murdered Bunny to be both, depending on who someone was to her. For the coffee cart guy who has her morning octane ready for her as she walks by, she has nothing but smiles and small talk.

RELATED: "Only Murders in the Building" makes me long to reconnect with our elders

To Ivan, a server at the local diner, she's that regular who's been coming around long enough to hear him talk about his dream of becoming a DJ. The unusual part is that she remembers that detail and cares enough to help get him on his way.

If you didn't live with Bunny, she's a charmer, a sweetheart, a generous tipper perpetually swaddled in a fur coat. To the residents of the Arconia, the people she served as the building's board president for 29 years, she is "an actual witch," "a cranky old bitch," "a relic" who becomes more beloved in death than in life.

"If Bunny acted like she knew better than you," Charles narrates, "it's probably because she did."

Solving a murder makes Charles (Steve Martin), Oliver (Martin Short), and Mabel (Selena Gomez) the building's heroes for a time. But Bunny's decades of service are rewarded with avoidance and sparsely attended surprise retirement party, complete with a funerary banner reading, "It's Over."

"We never got along, but still. Poor Bun-Bun," Oliver coos into his recorder in a different scene, pausing for half a beat before hitting the stop and jauntily asking Charles and Mabel: "That plays, right?"

"Only Murders in the Building" is buoyed by its appeal to a shared sense of longing, both the kind endured by two elderly men and the young woman who befriends them and the version tugging at an audience stretched thin by societal separation.

Living through a pandemic makes this feeling more acute, but long before the first lockdown, we were already a country of neighbors living next to each other without comfortably coexisting. Exurban sprawl and a generation-wide philosophical shift away from focusing on what's best for the community and toward aggressive individualism have only intensified our culture-wide loneliness.

But this episode illustrates how that sense of separation is a lot harder on hard-boiled women like Bunny, who are saddled with the thankless task of holding everything together. "If Bunny acted like she knew better than you," Charles intones in voice-over, "it's probably because she did." 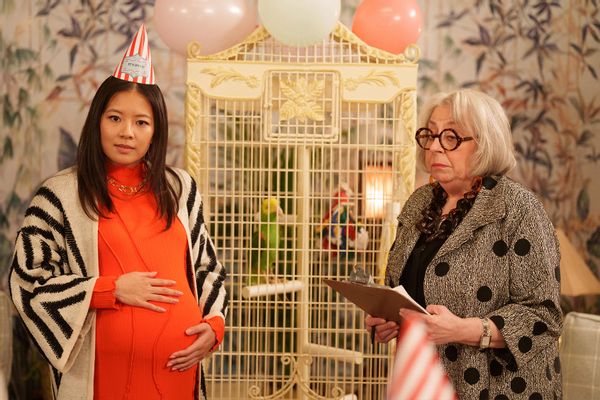 Bunny receives no such grace in the first season of "Only Murders in the Building," when she's introduced as a heartless obstacle to Oliver, Charles, and Mabel's fun. She doesn't want their podcast to besmirch the building's reputation or, worse, goad the killer into taking another victim. Even without the podcast, she's still Oliver's biggest nemesis, glaring at him from behind her oversized glasses and hounding him over his delinquent payment of building fees.

Another way to see her, as this episode shows us, is as an exhausted, no-nonsense caretaker.

Bunny never had a choice to be anything else. She was born into her position, the granddaughter of the architect who designed The Arconia. Bunny lived every day of her life in her apartment, we're told, inheriting an enviable piece of real estate and with it the curse many women end up bearing, that of responsibility.

It's telling that Bunny's mother, not her father, held the Board President role before her. Based on The Arconia's timeline, which begins in 1908, her mother's time in the role would have been sometime after the war but pre-women's liberation, a time when ladies were supposed to be polite and smile pretty, two useless traits when you're collecting money or trying to keep your building's common areas tidy. If Bunny is terse, it's probably in her blood.

Bunny [is] a custodian of tradition: The Arconia's and that of a vanishing version of New York.

It's also telling that the people who see her sweet side – the man at the coffee cart, or Ivan, the waiter at The Pickle diner – are also people in the caretaking business. They're relative strangers who she treats as friends because she gets them. They look out for her, and their jobs are probably pretty thankless too.

Showing these small details also reveals Bunny to be a custodian of tradition – The Arconia's and that of a vanishing version of New York, illustrated by her day starting with her listening to a local talk radio host lamenting the inability to get a decent bagel and the changing names of its bridges. One person's custodian is another's janitor, there to keep things tidy but easily replaceable.

She's cruelly reminded of this by Nina (Christine Ko), a very pregnant, do-it-all career woman driven to balance taking over as Board President with her career in finance and new motherhood. She wants The Arconia to be made more efficient, modernized, and monetized; Bunny merely wishes for it to be preserved.

That doesn't matter. Bunny's time is over while elsewhere, Charles and Oliver, along with Mabel, get to hit the reset button.

This was the story of Bunny's life. Explaining her death is still in progress, but its tragedy began while she was still breathing, as Charles, Oliver, and Mabel point out. In a rare act of magnanimity, after Nina's insult, she hears the amateur sleuths celebrating and brings over a bottle of good champagne.

In a polite world, the trio would have invited her to join their celebration and let bygones be bygones. But this is the modern age of people keeping to themselves and having enough friends. They hand her a sweatshirt, smile, and close the door in her face, leaving her to sob her way back to her apartment alone with nobody to witness her murder except her parrot.

One common story about old age is that men keep to themselves, while a certain type of matron makes it her business to be aware of everything happening on her street. And yes, this gendered generalization is intentional, drilled into us through a variety of TV and cinematic versions of nosy neighbors and strict, rule-keeping neighborhood killjoys like Mrs. Kravitz from "Bewitched." 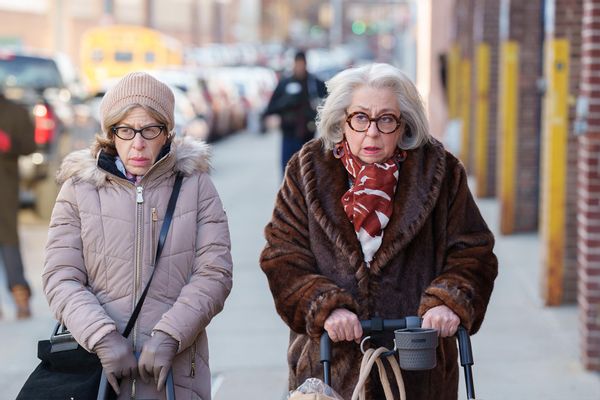 Of course, some stereotypes have a shred of truth to them. When you move into a new neighborhood, if there's a welcome wagon to greet you, women tend to be the ones steering it with one hand and balancing a plate of cookies in the other. These are the ladies who want to smooth your transition into their orbit. But they also want to get a closer look at the person who's living a few doors away from them.

Houdyshell, a Broadway legend, makes Bunny's stony façade an extension of The Arconia with a demeanor to match. She's immovable regarding excuses and procedural violations but quite charming when you get to know her. She's also one of the few people in the place who knows enough of its quirks to keep it running and remembers enough about what it once stood for to keep it classy.

Humanizing Bunny is in keeping with the show's general nimbus of empathy for all of its personalities, even its villains. But Smith's profile makes a case for the necessity of women like Bunny while mourning the fact that they're often pushed to trade being loved for being respected. To wit: in her impromptu run-in with Charles, Mabel and Oliver's small group of fans, one admits he thought she killed Tim Kono, Season 1's victim, "because Tim was behind on his building fees, and I distrust women in positions of power."

Such is the way of the world, in national politics and local, on a global stage, or in our hallways and the streets outside her front door.

The people who depended on Bunny were trained to avoid her. She's not alone in that. One of her few friends in the building, Uma (Jackie Hoffman), is a deadpan, cranky gossip who never warms to our trio's charms. And Uma is among the few Arconia residents who choose to spend time with Bunny on her last day alive, taking a short walk to hear her mull over wintering in Florida.

With her deadly serious face, Uma jokingly threatens to break into Bunny's apartment while she's away and wear all of her clothes. At this remark, Bunny flips Uma the bird, spicing it up a dispirited "f**k you," that Uma returns in kind.

But there's no anger to this exchange, just the exhausted affection of two ladies of a certain age accustomed to the world seeing them a certain way. They've seen enough of the world and their neighbors to accept that good things, and decent people, rarely stick around forever.

"Only Murders in the Building" streams new episodes Tuesdays on Hulu.