This president denounced sharks as "monsters" — but did they take a bite out of his voters? 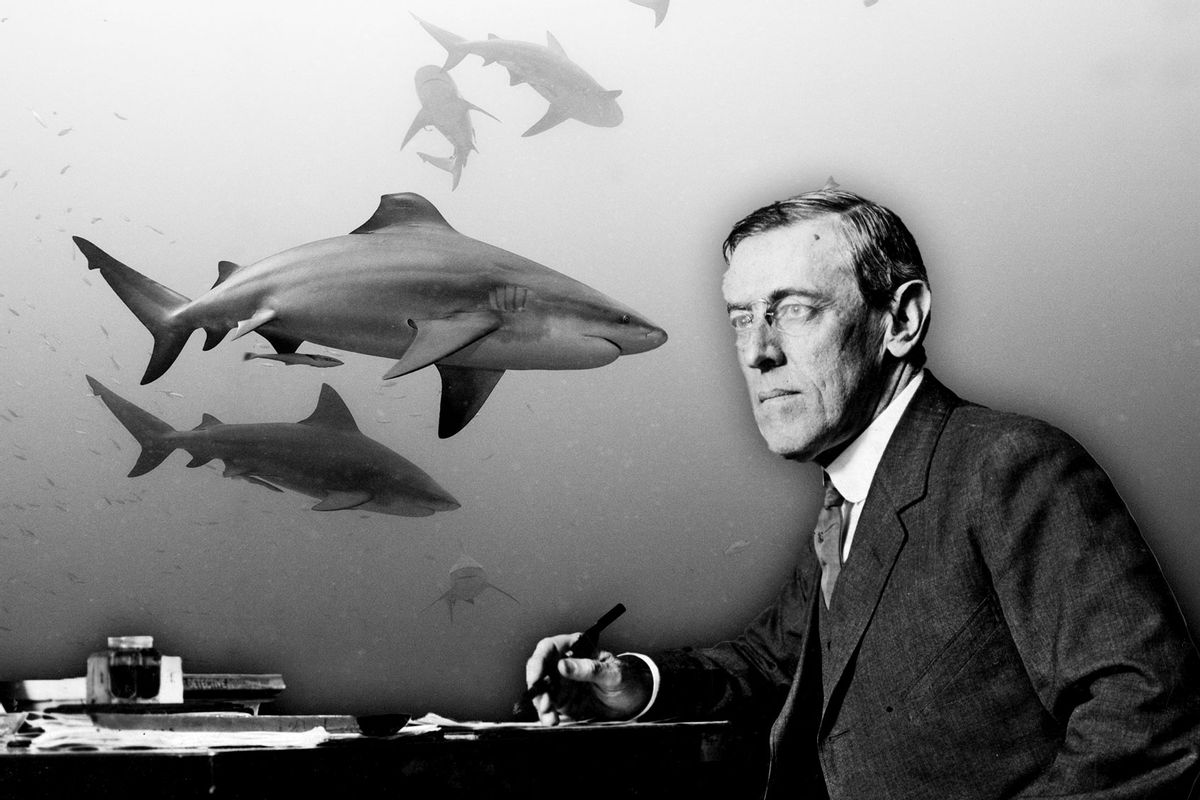 Humans have a long and (mostly) unjustified fear of sharks, and politicians are no exception. During his single term in office, for instance, it famously emerged that Donald Trump is "terrified" of sharks, prompting predictable snickers from his opponents.

Yet more than a century before Trump's inauguration, a different president was also bedeviled by the ocean's most unfairly maligned pariah — and he may have actually lost votes because of it.

The president in question was Woodrow Wilson, infamous for his white supremacist ideas and willingness to throw political dissidents into the clink. His problem? The Jersey Shore shark attacks of 1916.

RELATED: Land shark? Why more shark encounters are likely coming and how "humans are not on the menu"

Between July 1 and July 12, 1916, four people were killed and a fifth individual was injured all along the coast of New Jersey, from Beach Haven to Matawan. Historians and scientists remain uncertain to this day as to either the number of animals that committed the attacks (some argue it was just one, others multiple) or the exact species involved (bull sharks and great white sharks are the most popular suspects). Yet no one denies that the shark attacks had a profound impact on American culture: Peter Benchley's hit 1974 novel "Jaws" was arguably inspired by the attacks, and the blockbuster movie based on the book released one year later directly references them. Newspapers suddenly warned nervous readers about a ferocious fish, as ancient as the dinosaurs that prowled the seas in search of human flesh.

This was far from true, of course — sharks almost never attack humans unless they're confused, provoked or starving, and the Jersey Shore incident is notable precisely because the sharks behaved very uncharacteristically — but it sold great copy. And it put the president in a bind.

In the years since the 1916 election — during which Democratic nominee Wilson (a former New Jersey governor) faced off against the Republican nominee, former Supreme Court Justice Charles Evans Hughes — some scholars have argued that the president lost some votes because people irrationally blamed him for the shark attacks. Yes, you read that right: Woodrow Wilson lost votes because he was blamed for shark attacks.

Why did voters blame Wilson? One theory is that, on some subconscious level, voters assume that a president's seeming inability to confront natural disasters reflects deeper flaws in their leadership skills. In 2002 scholars Christopher Achen and Larry M. Bartels — who studied how the shark attacks impacted Wilson's election — came up with a neologism to define voters' sometimes illogical tendency to determine a president's stewardship over their welfare: "blind retrospection." In the case of Wilson's re-election campaign, Achen and Bartels controlled for Wilson's vote share in the previous election and compared how it changed in both beach and non-beach counties in New Jersey.

Based on their analysis, the shark attacks reduced Wilson's vote share in affected counties by more than 3 percentage points, and hurt his overall vote share in the 1916 election by roughly 0.5 percentage points. Achen and Bartels conclude that their statistics "show that voters in the affected communities significantly punished the incumbent president, Woodrow Wilson, at the polls."

To be clear, the Achen and Bartels paper is controversial. In 2016 scholars Anthony Fowler and Andrew B. Hall argued that there were flaws in the Achen/Bartels paper's analysis, including the fallacy of "forking paths" — namely, that they could have interpreted their data in any number of ways that would have seemed to give it statistical significance, and could have simply chosen one that conformed with their preferred hypothesis.

Yet even if the Jersey Shore shark attacks didn't cost Wilson a single vote, the president's response to the prospect that they would — even if that possibility seemed far-fetched — remains relevant today.

Soon would-be heroes were flocking to New Jersey with boats, fishing gear and dynamite, killing countless innocent sharks in their hunt against the so-called "man-eaters."

Convening an emergency cabinet meeting as the public became increasingly hysterical, Wilson ignored the scientists who had previously implored him to view the shark attacks as the anomalies that they were. Given that Wilson was an educated man (to date, he is the only president to have had a PhD), it is likely that he understood the marine biologists' concerns and simply deemed political expediency more important. Then again, no one can know for sure: Perhaps Wilson was more genuinely alarmed by the Jersey Shore shark attacks than the mayor from "Jaws" was during the fictional attacks in Amity Island.

All we know for sure is that Wilson ordered a Coast Guard cutter to "fish for the monsters" and sent out an anti-shark message so strident that the Washington Post could accurately declare in its headline, "U.S. War on Sharks." Soon would-be heroes were flocking to New Jersey with boats, fishing gear and dynamite, killing countless innocent sharks in their hunt against the so-called "man-eaters."

While there are obvious lessons in this story for today about the importance of conservation and relying on accurate science, perhaps the most important takeaway involves the need for basic common sense. Because Wilson was afraid that he would be harmed by irrational thinking (being blamed for shark attacks), he responded with a policy motivated by a different form of irrational thinking (declaring a "war on sharks"). It is unlikely that anyone was safer as a result, and virtually certain that sharks as a species were worse off.