Jessica Botta, a chef-instructor at ICE, gives us the 101 on these popular and unique seasonal fruits 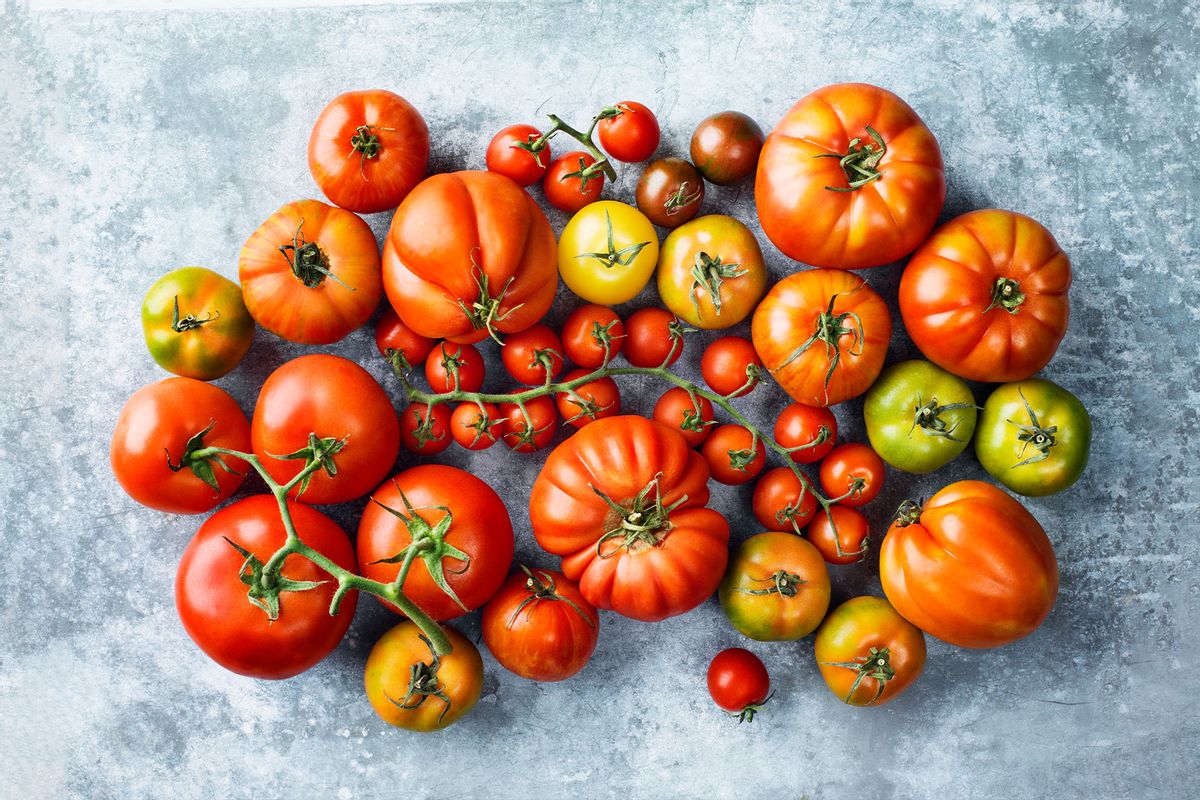 Despite being summer's most misunderstood fruit, tomatoes are enjoying their time under the produce spotlight. The bulbous cultivars are a common sight at local farmer's markets, outdoor vendors and grocery stores, where they are fruitfully (pun intended) sold in abundance.

Tomatoes are revered in the culinary scene for numerous reasons. But their greatest features are versatility and variety. The fruits, which belong to the nightshade family of flowering plants, are deliciously salty with syrupy undertones, making them perfect to use in salads, pizzas or, even, desserts. They also come in different types, from Roma tomatoes and Beefsteaks to  Cherokee Purples and Brandywines.

How to use tomatoes in summer desserts, from spiced cakes to refreshing granitas

But which varieties work well in savory dishes and which ones can be paired with more saccharine flavors? How should tomatoes be stored and maintained? And what key characteristics, like size and firmness, signify a good pick?

To help answer these questions and give us the 101 on these fruits, we spoke with Jessica Botta, a part-time chef instructor at the Institute of Culinary Education (ICE) and an all-around tomato aficionado. Botta offers tips on how to choose the perfect tomatoes, breaks down a few varieties and shares two recipes you can make at home.

When are tomatoes at their peak?

Botta says peak season for tomatoes depends on the location where they are grown and harvested in. Most tomatoes grown in the Mid-Atlantic area — where Botta is based — first crop up in May, then reach peak ripeness in June and stay in-season up until late October.

A general timeline for tomatoes begins in mid-to-late summer and lasts well into fall, although the specific peak months for different cultivars vary from coast-to-coast.

Different types of tomatoes and hybrids (a mesh of two particular varieties) can be grouped into two categories: determinate and indeterminate.

Determinate tomatoes grow to a fixed mature size, ripen in a short period of time and are in season for just a couple of months, usually between July and September, according to Botta. Plants that carry these kinds of tomatoes "will begin to diminish in vigor and will set little to no new fruit" after reaching peak ripeness, per The Spruce. Determinate tomatoes are also referred to as "bush tomatoes" and are small in plant size, typically growing to about 4 to 5 feet tall.

Indeterminate tomatoes, on the other hand, have a longer growing season and ripening period. They are commonly known as "vining" tomatoes. These plants will bear fruit continuously, while they are in season, instead of producing one large harvest. And unlike determinate tomatoes, which stop growing at a fixed time, indeterminate tomatoes continue to ripen until harsh weather conditions kill off their plants.

How to choose good quality tomatoes?

Botta says there are no hard-and-fast rules for choosing tomatoes — it all depends on your own cooking needs and the specific dishes you're planning on preparing. She does, however, offer one important tip, which is to pick firm tomatoes (they tend to hold their shape and maintain their flavors when sliced) by giving them a quick squeeze and checking for any bruises and blemishes.

"Tomatoes, to me, definitely have an aroma. And that varies depending on the kind of tomato it is…some are more fragrant than others," Botta adds. "I love to give them a smell too — almost like a melon — just to get a sense of [their] peak ripeness."

How to ripen tomatoes?

If your red tomatoes are more green in color, you can speed up their ripening process by storing them in a paper bag and letting it rest at room temperature on the kitchen counter.

"[Tomatoes] may have been picked just a day or two before peak ripeness to make sure they aren't going to be too soft for transport to the market or to the grocery store," Botta explains. "So letting them ripe on the counter or in a paper bag can just take them to that state of perfection for use."

How to store tomatoes?

Whatever you do, never refrigerate your fresh tomatoes, even after slicing them. Cool temperatures, specifically below 50 degrees Fahrenheit, will spoil the texture and reduce the flavor of both ripe and unripe tomatoes, regardless of their specific varieties.

Botta recommends using a serrated knife which is sharp enough to cleanly slice through a tomato without ruining its shape and its slimy flesh. Serrated knives are also a great tomato-cutting tool if your chef knives or regular chopping knives are blunt from repeated use.

How you cut your tomatoes and the way in which you do so matters, especially when preparing raw tomatoes in summer salads or dressed up bruschetta. On the flip side, presentation isn't a big deal when you're blending or mashing tomatoes.

Although Botta rarely grates her tomatoes, she says it can be done when making salsas or Spanish tapas, like a classic pa amb tomàquet, also known as pan con tomate or simply, grilled bread with tomato.

The best way to remove a tomato's skin is to blanch it. To start, remove the tomato's stem and make a slight cross mark (a technique called scoring) on the bottom of the fruit before dipping it into boiling water for approximately 10-20 seconds. Remove the tomato and quickly shock it in an ice cold water bath. When the tomato has cooled, use the tip of a paring knife to slowly peel back its skin.

If you're looking to be more adventurous in the kitchen, try the frying method instead. First, heat up your frying oil to about 325 to 350 degrees Fahrenheit and score your tomatoes the same way you would when blanching them. Once they are dropped into the hot oil, the tomatoes will crisp up and "pop." Scoop up the fried tomatoes and place them on a tray to cool before peeling. Botta says this method comes in handy when peeling smaller tomatoes, like cherry or plum tomatoes.

After peeling the tomatoes, be sure to save the skin instead of hastily discarding it. Botta suggests dehydrating the fruit's skin using an at-home dehydrator, and then pureeing them into a powder or adding them into sauces, soups and cocktails, like a classic Bloody Mary.

This meaty, juicy and bright red variety is best enjoyed raw, whether that's in a traditional Caprese salad or a BLT sandwich or a hefty burger.

Beefsteaks are also wonderful frying tomatoes. For your next meal, try making this Food52 recipe for Panko-Crusted Beefsteak Tomatoes with Cilantro Garlic Pesto.

Known for their dusky purple hue, these Tennessee native tomatoes are sweet with hints of smoky and salty flavors. Out of all the tomato varieties, Cherokee Purples are the most versatile and can be prepared raw or blended in soups and sauces.

Some savory dishes that can be made with Cherokee Purples include Fattoush, a Levantine salad with pieces of pita bread, mixed greens, radish and other fresh veggies, or a simple "no cook" tomato sauce. If you're craving something sweeter, check out these recipes for a Watermelon-Heirloom salad and a Cherokee Purple Heirloom Tomato Sorbet.

Botta suggests roasting these sweet, multicolored and bite-sized tomatoes with garlic, herbs and a little lemon and orange zest. Cherry tomatoes can also be used to make pasta sauces or topped in salads and bruschetta.

Because cherry tomatoes are more bright in flavor, they can be incorporated into sweet baked goods and desserts. A few fun recipes include Martha Stewart's Cherry Tomato Crisp and Southern Living's Cherry Tomato Cobbler with Basil Ice Cream.

Botta recommends pickling any kind of unripe red tomato varieties. They can also be eaten raw or fried with a sprinkle of cornmeal, similar to beefsteak tomatoes. Unripe tomatoes tend to be firmer in texture and more acidic in taste. But they can also be sweetened with granulated sugar, lemon juice and cinnamon and enjoyed in both pies and jams.

Roma tomatoes are a specific variety of plum tomatoes that are more elongated in shape. In terms of flavor, they are saltier and more sour compared to cherry and Cherokee Purple tomatoes.

Roma tomatoes can be roasted — Botta likes to first cut them in half, lengthwise, and then coat them in garlic, anchovies and breadcrumbs before popping them into the oven. They can also be canned and preserved in water, lemon juice concentrate or a tomato-based purée.

Courtesy of Jessica Botta, chef-instructor at the Institute of Culinary Education

*Any ripe tomatoes can work, but beefsteaks work well. Chocolate stripes or kumatoes really shine flavor-wise, but will alter the color of the salmorejo.

Note: Salmorejo can be eaten as a cold soup or a dip for crusty toasted bread.

Courtesy of Jessica Botta, chef-instructor at the Institute of Culinary Education

Note: The pesto can also be made in a mortar (a marble one is ideal), in which case you would start by pounding the garlic, salt, and basil to form a paste, then add the almonds half at a time, and continue to pound. Then add the tomatoes, olive oil, and freshly ground black pepper.